Who is to blame for Sam Lowes’ MotoGP demise: the rider, Aprilia or someone else? Look behind the scenes and there’s an obvious answer few have noticed 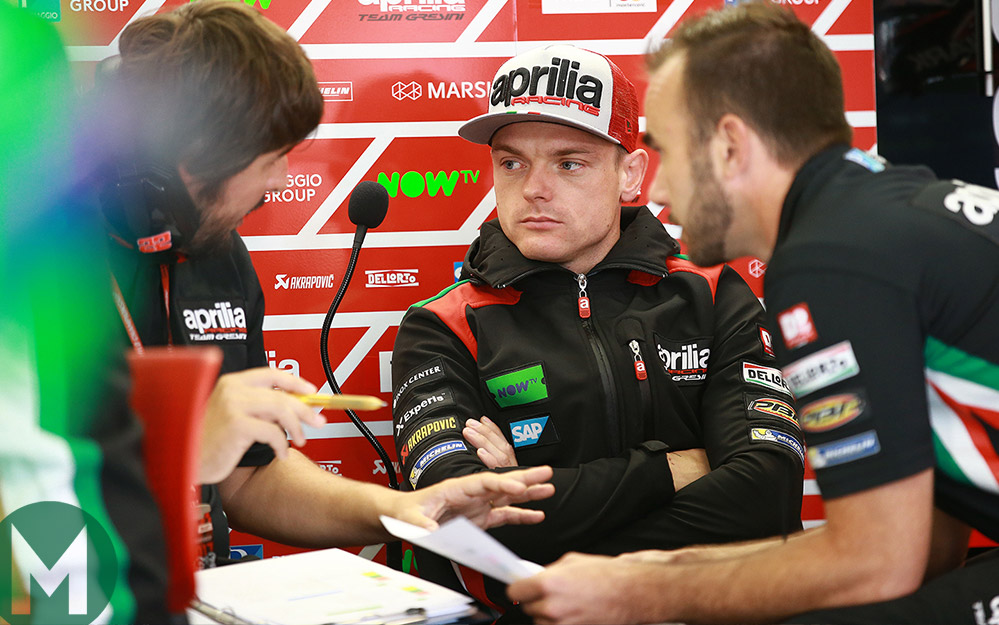 Silverstone was a weird weekend for Sam Lowes: his first and possibly (but hopefully not) last British Grand Prix as a MotoGP rider.

Lowes’ unceremonious sacking during the preceding Austrian Grand Prix caused a minor furore in the paddock and asked some major questions.

Most obviously, what is a contract worth? That’s an easy one to answer: a contract is worth next to nothing if someone is prepared to buy themselves out of it, to some extent. Lowes wanted to continue his MotoGP learning process with Aprilia next year, but all he will receive will be his salary. No bikes. It’s a miserable deal, but that’s the way the world works.

Cal Crutchlow, a good friend of Sam’s, is typically forthright in his view of the situation. “I think it’s a disgrace, there’s no other way to put it,” says the LCR Honda rider. “What did they expect him to do in his first year in MotoGP on that package? It’s not a Yamaha! I look at my first year on a MotoGP bike [a Yamaha] and mine was probably even worse. They’ve treated him like crap. He’s not doing a bad job – you cannot imagine how many times he’s been sat in the garage during practice sessions with his bike not running.”

Not only has Lowes had to contend with below-par machinery, his dismissal sets a worrying precedent. It is important for MotoGP rookies on two-year deals to know that they’ve got the time to get up to speed, so they can focus on learning during their apprenticeship season, without the pressure of taking big risks to get results; then the following year they can start pushing harder for results. The sacking of Lowes means that other rookies coming into MotoGP will be concerned that the same fate may befall them, which means more pressure, which isn’t a good thing when you’ve got L-plates on your MotoGP bike.

Lowes has faced his dismissal with equanimity and good humour. During a busy media debrief he accidentally knocked a journalist’s voice recorder to the ground. “Sorry, I’ll buy you a new one,” he grinned. “Though I haven’t had many bonuses this year…”

Of course, there is always more than one side to a story, so what might be the other sides to the Lowes/Aprilia saga?

There is probably no one in MotoGP who knows more about rider contracts and team management than Andrea Iannone’s personal manager Carlo Pernat (photo below, far right). The Italian has been in the paddock for almost 40 years. He has worked for Gilera, Cagiva, Aprilia and Ducati and he has managed Max Biaggi, Loris Capirossi, Marco Simoncelli and now Iannone. He believes Aprilia’s big mistake wasn’t sacking Lowes but rather hiring a rookie to develop a new bike.

“From my experience of managing factory teams and managing riders it is completely wrong to have a new and young rider on a bike that isn’t already at a high level,” says Pernat. “Developing a bike is already a difficult process for an old rider. A young rider cannot develop a bike and learn at the same time, because he needs to focus on his feeling with the bike. So you should only take a young talent when your bike is at a good level. If not, you destroy the rider, you destroy the bike or maybe both. And this is what has happened because the bike isn’t competitive and Lowes has had many crashes, so this isn’t good for the development of the bike or the rider. When I heard that Aprilia had signed Lowes I told Romano [Albesiano, Aprilia Racing manager], you are making a big mistake.”

“When I left Cagiva to join Aprilia in 1990, the Aprilia 125 and 250 weren’t so competitive, so we didn’t hire young riders, we hired older riders with lots of experience: Carlos Lavado, Martin Wimmer, Didier de Radigues and Loris Reggiani. Then once the bikes were competitive we started searching for new talent, who we signed on three-year contracts: Biaggi, Valentino Rossi, Roberto Locatellii, Stefano Perugini. This was my system: three-year contracts, but with competitive bikes.

“Now it seems to me that all the factories want to hire a phenomenon, but first you must have a competitive bike. Lowes is paying for this situation; for sure it’s not his fault.” 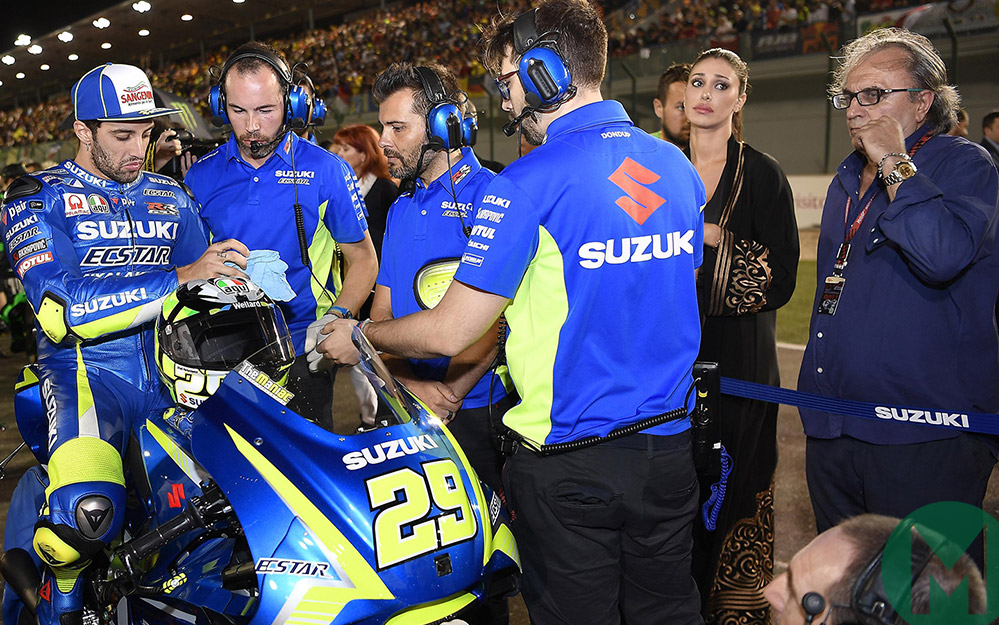 Pernat isn’t only critical of Aprilia, he also criticises Suzuki’s 2017 hiring policy, which includes his own rider. Both factories made the mistake of signing a completely new rider line-up, so they’ve got no riders with previous experience of their machines. And without knowledge of the past it’s difficult to go forward.

“You never hire two riders that don’t have experience of the bike, especially when one is a rookie!” he adds. “Also, when Iannone came from Ducati to Suzuki he brought his crew chief from Ducati. This was another big mistake because no one knows the bike. Suzuki should have put Maverick Vinales’ crew chief with Iannone. It’s logic, that’s all.

“Also, people forget that the situation is very different for Suzuki this year: last year their riders had 13 engines, more fuel than the others and they could go testing more than the other factories. Now they have seven engines, no extra fuel, no extra testing; this is another key to their current situation.”

Pernat, perhaps not surprisingly for a 69-year-old, believes that some people in the MotoGP paddock have lost their way.

“Years ago everyone worked by logic. Now life is so hurried that people don’t work in this way. How many young riders will get sacked because the factories want immediate results? With most riders, good results come after two or three seasons, because there are only a few phenomenon riders. It’s not easy to choose the right rider, but if you know what you’re doing, you don’t make mistakes.”

“In 1995 when I signed Valentino, Aprilia said they didn’t know who he was, but I gave him a three-year contract because I could see he was something special, like Kevin Schwantz.”

Pernat enjoys talking about the 1990s, when he and engineer Jan Witteveen led the tiny Noale factory to 14 riders and constructors world championships. He loved the cut-and-thrust and the cloak-and-dagger of his job and he still does.

“At the end of 1991 I made a contract with Biaggi for the 1992 and 1993 250 world championships. Halfway through 1992 he signed with Honda for 1993. I told him, you are a stupid man because you have a contract with Aprilia for 1993, so we will take you to court. He had a bad season with Honda in 1993 [mainly due to his switch from Dunlop to Michelin tyres], so nobody wanted him for the next year. I telephoned Max and said, nobody wants you. If you come back to Aprilia I will make you a two-year contract: 200,000 Euro in 1994 and 400,000 Euro in 1995. If you don’t want it, then we will take you to court and that will cost you a million Euros. Then at the end of 1996 [when Biaggi completed a hat-trick of 250 titles with Aprilia] we decided to get rid of him because he broke our balls. It was impossible to live with him at that time, so we said, go, ciao, goodbye!

Pernat left Aprilia at the end of 1998 to work in football. His departure coincided with Capirossi taking out Harada at the last corner of the season-ending Argentine GP to win the 250 world title. Aprilia sacked the Italian for that controversial move, so Capirossi took the factory to court, because they had broken his three-year contract. Aprilia were ordered to pay Capirossi two million Euros in damages. Capirossi immediately blew a chunk of the cash on a new Ferrari and put ‘Aprilia’ on the reg plate!

I wonder how Lowes will spend his 2018 Aprilia salary? Or should he take them to court and ask for more?