There has been no shortage of talking points in MotoGP between the frantic Grand Prix of Austria and the build-up to the British GP and return to Silverstone.

Maverick Viñales and Yamaha have parted ways after the Spaniard’s erratic actions during the Styrian round which means Cal Crutchlow will take part in his homecoming aboard the factory Yamaha machine alongside championship leader Fabio Quartararo.

The Frenchman somehow managed to extend his title advantage despite back-to-back races around the Red Bull Ring, historically a Ducati fortress, though he put in a measured ride to achieve one podium finish and a solid points finish in the chaotic final few laps as the rain fell.

Brad Binder’s immense ride to victory was his first top-step finish since his maiden win last year, while Pecco Bagnaia agonisingly missed out on his first MotoGP victory.

Ducati achieved podiums across both races at the Red Bull Ring but neither Johann Zarco nor Jack Miller could capitalise on the chaos to strengthen their positions in the riders’ championship. Catastrophically for the latter, a fall in the Styrian race over a fortnight ago has stunted any momentum he’d hoped to build for a title challenge, and it’s team-mate Bagnaia who is now Quartararo’s closest challenger heading to Silverstone, albeit still 47 points adrift.

Here are the times you need to watch the 2021 MotoGP Grand Prix of Britain.

How to watch the MotoGP British Grand Prix live

BT Sport’s monopoly on live MotoGP racing ended this year, with ITV being given two live races to screen, and the British Grand Prix is the second of those (after the French GP earlier this year). The full race will be shown live on ITV’s main channel on Sunday. Coverage will begin at 12:30pm BST with Matt Roberts presenting. 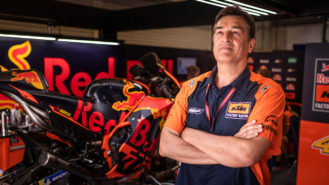 KTM entered MotoGP four years ago and is already battling with rival manufacturers who have been racing in the premier class for decades. Only Yamaha has won more races since…

Alternatively, if you already have a BT Sport account, the race will still be streamed live across the event via the BT Sport app. This covers every practice session along with Moto2 and Moto3 action throughout the weekend.

A final option is the official MotoGP app. A monthly pass, costs £10.29 per month and a full season video pass, costs £82.35 for the season package. As well as showing live coverage of every session and race this season, the service also has 22,000 videos from past MotoGP events including interviews, reports, full races, summaries and so much more.

How to watch online

You can watch the Silverstone race online through any of the broadcasters’ apps: ITV Hub, BT Sport and MotoGP.