They called him the next Marc Márquez and at Jerez he took an important record from the world champion, so is the Frenchman the most exciting rider to hit MotoGP since 2013? 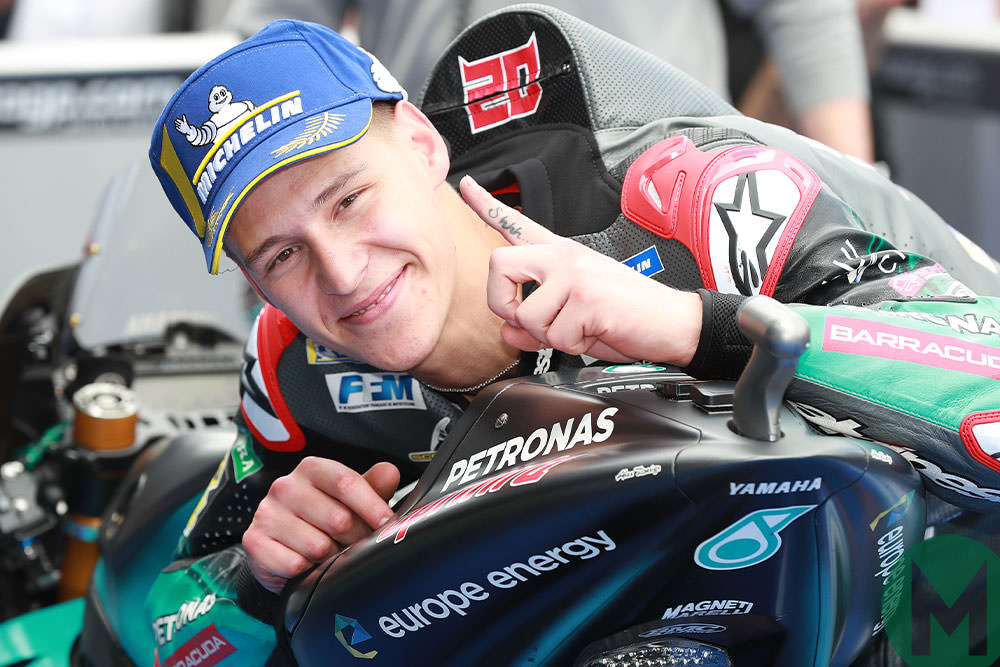 Fabio Quartararo is the fourth stellar rookie to arrive in MotoGP since Marc Márquez won the championship in his rookie 2013 season. But the 20-year-old Frenchman is different from Márquez, Maverick Viñales and Johann Zarco.

The other three raced and won in 125s or Moto3, raced and won in Moto2 and were quickly promoted to MotoGP. Quartararo’s road to MotoGP was somewhat different. It started well, but later went so badly awry that he might never have made into the class of kings.

His story is a cautionary tale about the fragility of a rider’s talent. Racing isn’t all about what happens on the track and in the garage. Top racers aren’t normal human beings but they are humans nonetheless, subject to the same faults, frailties and emotions as the rest of us. And that applies severalfold to innocent kids, entering a man’s world from which innocence fled many moons ago.

He retained the CEV crown in 2014, riding for the Monlau team, run by Márquez’s mentor Emilio Alzamora. Inevitably he would move into the Moto3 world championship in 2015. There was only one problem: he had to be 16 at the start of the season. In fact this was no problem. He was so good that the rules were changed to allow CEV winners to contest grands prix at 15.

Many paddock people – who know their stuff – put money on Quartararo winning the world championship in his rookie season, when his rivals included Miguel Oliveira, Romano Fenati, Brad Binder and Danny Kent.

He started well – scoring his first podium in his second GP, taking pole position at Jerez and at Le Mans. And that’s when everything started falling apart. He scored fewer points at the last 14 races that year than he had at the first four.

Everything hit him at once: the pressure of racing against the best riders in the world, week in, week out; then crashes, then doubts, then more crashes and injuries.

“When you win the CEV title when you are 14-years-old and people come to tell you that you are the new Marc Márquez that doesn’t usually help,” says Wilco Zeelenberg, team manager of Quartararo’s Petronas Yamaha SRT squad.

“It’s not just racing; Fabio was growing up, coming into puberty, changing teams too quickly, having issues with his management, so it was difficult to judge what was going on with him.

“I had been watching him since CEV because it’s a high-level championship. He basically destroyed everybody, so his talent was clear, although a bit raw. Yamaha has also been watching him for a while. Four years ago Lin [Jarvis, Yamaha Racing’s managing director] asked me what I was seeing around the racetrack and who looked good, so I mentioned Fabio. As soon as Dani [Pedrosa] decided to retire and not join our new team for 2019, Fabio was at the top of our list.” 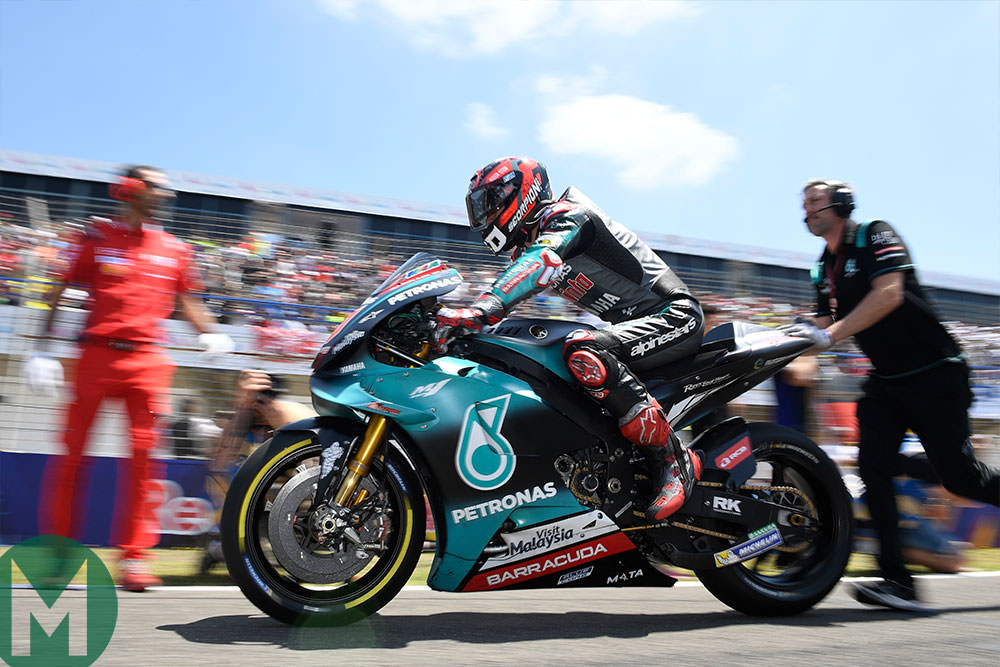 Quartararo’s miserable rookie grand prix season ended with him in 10th place and dropped by the Estrella Galicia-backed Monlau Honda team. He joined the Leopard outfit for 2016, but the team ran KTMs, not Hondas, so Quartararo went from bad to worse, ending the year 13th. He was fast becoming MotoGP’s forgotten teenage sensation.

Arguably the turning point came at the end of 2016, when the youngster split with his manager and went with former racer and journalist Eric Mahé, who also manages Randy de Puniet, Loris Baz and Jules Cluzel.

Quartararo was already in the process of signing a two-year deal with the Moto2 team of former 250cc world champion Sito Pons when Mahé started working with him. The 18-year-old’s first Moto2 season didn’t go any better than his last Moto3 campaign. He ended the year 13th, having never finished in the top five.

So Mahé negotiated his rider’s exit from Team Pons and suggested he join the Italian Speed Up squad, which hadn’t won a race since early 2015.

His new manager’s plan was simple. “Fabio burned with talent,” says Mahé. “But otherwise he had a shit system and his teams hadn’t connected so well with him. I convinced him to go with Speed Up, because this team works with its riders like a family. Also, the technical crew used to work with Randy, so I knew them and I knew how they worked.”

The MotoGP paddock is a tough place to live whoever you are; but especially for teenagers with burning talents that people want to use, some of them for their own good, rather than for the good of the rider.

“In this world there are a lot of snakes, a lot of bandits,” Mahé continues. “Apart from Speed Up, there were four other teams interested in Fabio for 2018. When I entered the office of one of the teams the first question they asked me was this: Eric, how much money do you want to improve our chances of signing Fabio? They wanted to give me an envelope full of money! Crazy! Terrible!

“At this stage I’m a bit like Fabio’s uncle. There is an affection which is important for his confidence, because if you cannot trust the guy who’s managing your money, then forget it…”

At Speed Up, Quartararo finally found a team that knows how to nurture a youngster. He took pole position and race victory at Barcelona, then followed that with a close second place at Assen, behind eventual champion Francesco Bagnaia.

Quartararo was back in the headlines for the first time since early 2015 and Mahé was already talking with teams, negotiating a move into MotoGP.

Talent, intelligence, bravery and determination are all vital to success in motorcycle racing. And so is luck. At the same time that Quartararo’s stock was rising, Yamaha announced it was creating a new independent MotoGP team, which was looking for at least one young rider for 2019. Quartararo got the job, alongside 2017 Moto2 champ Franky Morbidelli.

“This team is perfect for Fabio,” adds Mahé. “It has great bikes, good sponsorship, plus I’ve known Wilco and Stiggy [team principal Johan Stigefelt, who raced 250 and 500 GPs] for twenty years, so I don’t have to worry.”

Zeelenberg’s early interest in the youngster has already been justified, with last weekend’s stunning record-breaking pole and a potential podium, taken away by gear-shifting problems.

“His raw talent has always been there and we trusted in ourselves that we can manage that talent,” says the former 250 GP winner. “First you have to start working with a rider and try to understand him. Sometimes Fabio’s emotions were too hot [note the word ‘Shhh…’ tattooed on his left index finger], so we talked with him and asked him to calm down a bit. If you are on a hot lap and someone gets in your way, don’t get angry, just go and do the lap again. Fabio is bright and he listens.

“We tell him that you need to start every practice and try to get your feeling with the bike, because that’s your strong point. If you can’t feel the bike, come in, we will work on the bike and you wait until you get the feeling. This is one reason why he’s not crashing and he’s able to go fast, because he waits for the right moment.” 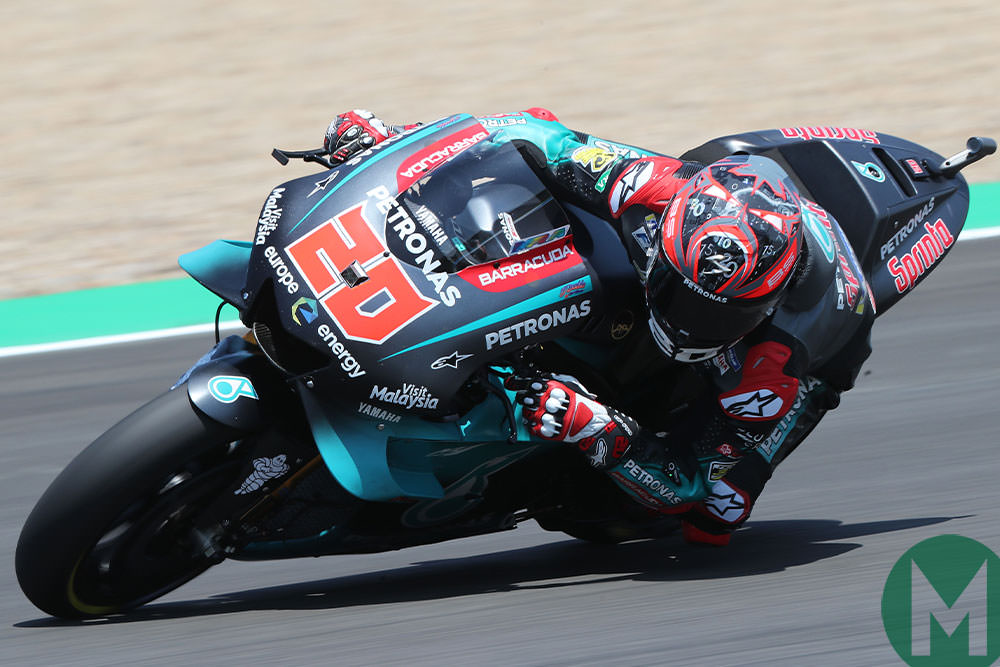 Quartararo is another super-smooth rider, a bit like Jorge Lorenzo, Álex Rins and Zarco. It’s a style that works well with Michelin’s current technical regulations, if you’ve got the right motorcycle. And everyone knows that Yamaha’s YZR-M1 is the best learner bike in MotoGP, because it’s so rider-friendly.

His technique is very natural. He doesn’t move as much as many riders and doesn’t use the extreme hang-off style that’s become the norm in recent seasons. Like Rins, he seems to make progress in a calm, unruffled manner that belies his devastating speed.

“I cannot explain exactly why he’s special,” says Mahé. “All these guys in GPs are special, they cannot be normal. It’s talent, which means spatial intelligence, temporal intelligence, coordination, everything like that. He is very smooth on the motorcycle, because when you tell a rider to attack, he shouldn’t be brutal with the bike, because this isn’t motocross.” In other words Quartararo uses his M1 like a rapier, not like an axe.

Although Zeelenberg has worked on his new rider to keep him calm and focused, he was anything but calm when he returned to the pits on Sunday, robbed of a dramatic podium finish.

“When I see a kid cry it’s difficult for me not to cry,” adds Mahé. “When Fabio came into the box he was destroyed, completely destroyed. Everybody tried to console him. I said, ‘Hey Fabio, you did it! You did it! It’s not your fault; you were unlucky and there are many more races to come’. For maybe 15 minutes he was destroyed, then for the next 15 minutes he was okay, then he reset.”

Quartararo faces possibly the biggest challenge of his career next time out at his home race, with all the extra pressures that entails. He will need to remember that his 2015 Moto3 pole position at Le Mans was almost the beginning of the end of his grand prix career.