How Jorge Lorenzo changed his race strategy and riding technique by 180 degrees, learning to steer the Ducati “like a boat” 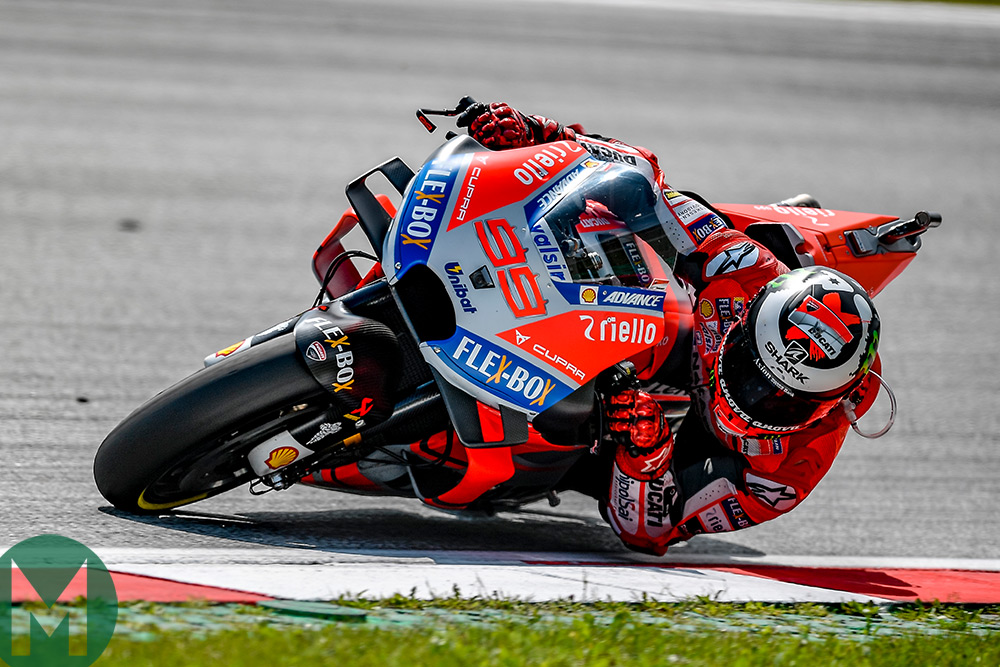 Let’s pretend that Jorge Lorenzo didn’t get flicked to the moon at Aragón. Instead let’s pretend that he ran wide at the first corner, lost a few places, then fought back to fight for the win with Marc Márquez and Andrea Dovizioso. On the last lap he out-brakes Dovizioso into the first corner, drafts past Márquez on the back straight and uses the Ducati’s stellar drive out of the final corner to cross the finish line three-hundredths of a second in front.

Okay, so Lorenzo didn’t win at Aragón, but this a good time nonetheless to examine how the three-time MotoGP king has transformed himself since he walked out of the Yamaha garage and into the Ducati garage in November 2016.

Some years ago, when only Casey Stoner could win on the Ducati, the Australian never liked to reveal the secrets of his technique, merely telling us that “you must subsume yourself to the bike”. In other words, the rider must omit his ego – instead of telling the motorcycle what he wants it to do, he must listen to the machine and do what it wants him to do. In fact, it’s not quite that simple – he must also listen to the machine and hear what it needs to make it perform better.

Back in his Yamaha/Bridgestone days, Lorenzo looked like a one-trick pony, winning races with the devastating corner-speed technique he had learned riding 250s. Not only that, he usually needed a clear track ahead, because anyone in front slowed him through the turns and nullified his greatest weapon.

This was his approach during each of his championship-winning years, especially 2015, when he won the crown by winning seven races, in which he led all 178 laps. And during those races he led all but nine of 2477 corners – the only corners he didn’t lead were turn one at Le Mans and the first eight at Mugello.

The fact that his victory rate plummeted by almost half in 2016, when Dorna’s unified software and Michelin tyres arrived, suggested that even the Yamaha alone wasn’t enough to help him dominate.

“In 2016 the problem with the Michelin front was that you had to do more straight-line braking, then release the front brake if you don’t want to lose the front going into the corner,” he explains.

Last season apparently confirmed the theory that his inch-perfect, wheels-in-line technique would never work on a different motorcycle: he went from seven wins in 2015 to four in 2016 to zero in 2017.

The start of this year wasn’t much better: just six points from the first three races, then at COTA he was beaten by Jack Miller and Tito Rabat, on second-hand Desmosedicis. On the plane home he looked mentally destroyed, but apparently not.

“I’m never destroyed mentally,” he says. “That was a hard moment. I was doing whatever it takes to come back to the top, but whatever I did was counteracted by the reality of my results.

“I knew I had a new lap record during preseason tests at Sepang, but then everything changed in the Thailand tests; everything became bad. Then I had bad luck in Qatar [where his brakes failed and he crashed], when I could’ve finished fifth and everything would’ve been better. Then at COTA I was beaten by Rabat and Miller, maybe because I felt something on the bike was wrong. We needed to change something because my arms were completely physically destroyed at the end of that race.

“But like I always say, when someone asks me about the pressure of racing, I’ve achieved so much more than I expected when I was a kid, so everything that comes to me now is like a present. I don’t have any kind of pressure, but I do have bad moments. So I keep working and keep fighting. I knew more good moments would come. We needed to change something on the bike and we did.”

Lorenzo led several races in 2017, so it was no great surprise when he led the next race at Jerez. But it was a surprise when, a month later at Mugello, he took his first victory with Ducati.

That weekend his Ducati jigsaw was completed by the arrival of the fat fuel tank. “That was the piece that helped me to manage the whole race,” he says. “Instead of getting tired after five laps, I could be fast from start to finish.”

The other factor was the change in his riding technique. In other words, those who had said that his usual technique wouldn’t work on a different bike were correct. To win on the Ducati he transformed himself like a chameleon changes its colour. Instead of the majestic sweeping lines, he was squaring off the corners: kick the bike sideways on the brakes, turn, then jump on the throttle.

“With the Ducati you have to use a lot of rear brake, especially in corner entry, because if both wheels are in line and not sliding, the bike wants to go straight to the gravel,” Lorenzo explains. “You need to steer the bike like a boat, with the rear, to get the right direction into the corner.

“To make the lap time on the Ducati you need to take profit of all the stability the bike offers, so you enter very early to the apex, use no lean angle and no corner speed, then take profit of the acceleration.

“Andrea [Dovizioso] has been at Ducati for since 2013, so he understood all these tricks perfectly, so he could take profit of the potential of the bike. I needed to understand all these little tricks in a very short time. And when I understood, my performance improved.”

He won at Mugello and again two weeks later at Barcelona, running away on both occasions, adjusting his technique at each track to find more speed and get more life out of the tyres.

“Lorenzo’s style is now the opposite of his normal style of last year and before,” affirms Dovizioso. 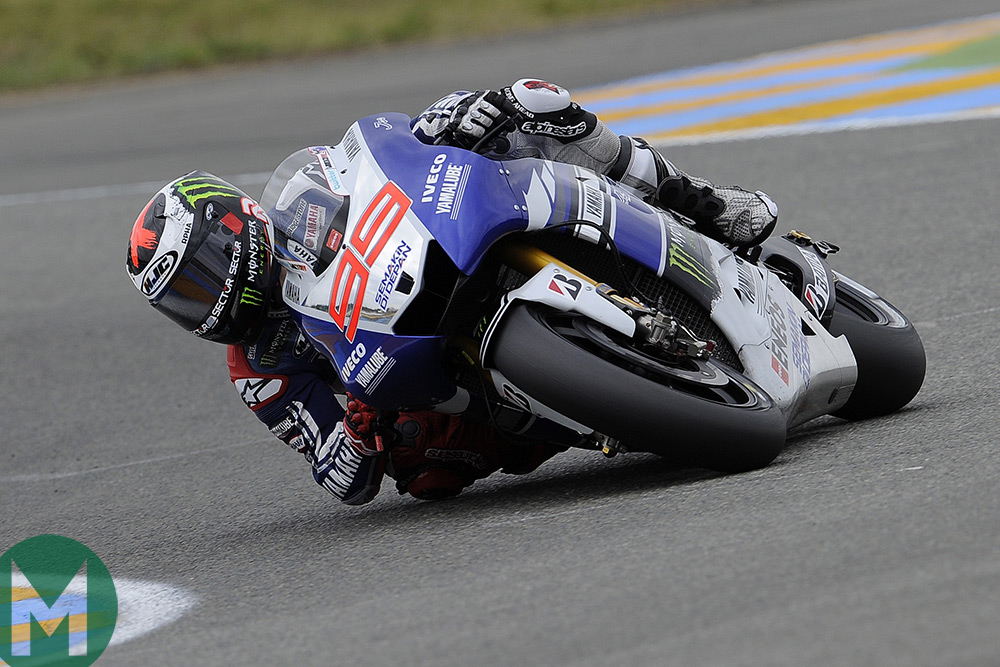 And then he realised he needed to learn something else. “The Bridgestone tyres suited my strategy and my concentration and focus, because they gave you the possibility to push from turn one to the last corner with the same pace,” he says, recalling those 178 consecutive laps in the lead in 2015.

“I am very good at focus and concentration, I don’t often make mistakes, so it was difficult for my rivals to catch me. Now all the riders need to save the tyres, riding at 80 per cent during the first three-quarters of the race and then attack. This was worse for me.”

Thus the next thing he changed was his strategy, again by 180 degrees. He very nearly won at Brno, when he again adjusted his technique through right-handers to conserve the right side of the front tyre, then engaged in a big slugging match with Dovizioso and Márquez.

The following weekend at the Red Bull Ring he used the same strategy when he went head-to-head with Márquez. But not until he had spent time examining video footage to understand how Márquez and others found so much speed through the two left-handers near the end of the lap.

In the final laps he inflicted a superb, aggressive block pass on his compatriot into Turn Nine and won the race by a tenth – he had beaten the king of the last-lap brawl in a last-lap brawl.

Next time out at Silverstone there was more evidence of how Lorenzo is in a state of constant metamorphosis. His weakest point had been riding on a track that was dry in some parts and wet in others. At Silverstone he took pole position on a part dry/part soaking track, bettering Márquez by nearly a second!

Changing the way you’ve ridden a bike for most of your life isn’t easy, especially braking from 200mph, back tyre skidding, front tyre sliding, knees and elbows on the ground… But Lorenzo has done exactly that.

My respect for him has increased severalfold this year: first, because he remade himself to ride the big red Duke, and second because he’s taken the challenge of going head-to-head with MotoGP’s reigning king, in 2019 and 2020.

However, I don’t agree with Lorenzo’s view of what happened at the first turn at Aragón, just as I didn’t agree with his view of what happened at Misano’s Turn 14, ‘Carro’, when Valentino Rossi overtook him there in 2016. His block pass on Márquez at the Red Bull Ring was stronger than both of those moves. And Márquez laughed about it afterwards. So I don’t see the reason for his complaints.

Looking forward to 2019 and 2020, Lorenzo versus Márquez on Repsol Hondas is likely to be an unforgettable epic. And Lorenzo thinks the experience of this year and last year will be a big help for him.

“Everything I’ve done to understand the Ducati will make my life easier in the next two years,” he says. “I hope my adaptation to my next bike will be faster, but you never know…”

Mat Oxley will be joining us for the next Royal Automobile Talk Show: Ask Jonathan Rea