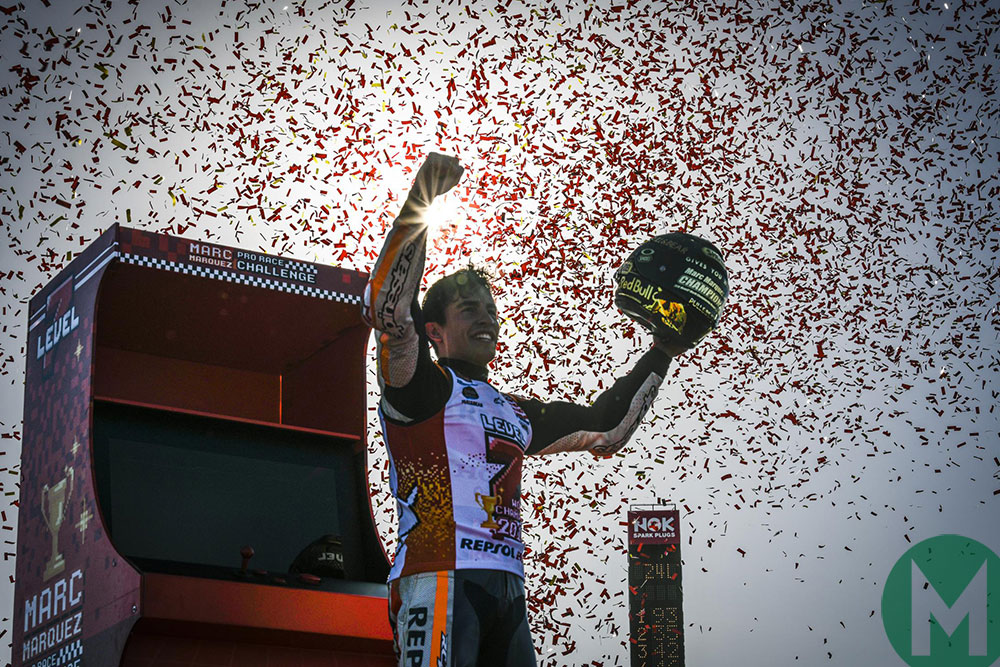 Marc Márquez is the youngest rider to win five premier-class crowns, taking the record from Valentino Rossi. And he does it with the most spectacular riding technique: sliding the front and the rear at every other corner. So what are his secrets?

It’s three years since MotoGP changed to spec software and Michelin tyres, so what has changed for you, do you have to ride the bike more sweetly?

The Bridgestone front was so good and the rear had no grip and the Michelins are the opposite. So, first of all, we adapted the bikes and also our riding style a little bit. Also, when they changed the software everything changed, because before you were able to use the electronics to be fast and now it’s the opposite: the less electronics you use the faster you go, because the software works in a different way.

Do you prefer racing with less electronics, so it’s you, not the ECU?

Yes, for me, less electronics is better, because then everything is more in your hand, in your body, in yourself. But also it was really nice to work with good electronics. The software we have now isn’t bad, but it was good to ride with high-level electronics because you were able to concentrate on other things: just open the gas full and try to do your best, so it was easier.

We see you saving so many slides with the Michelin front, so can you talk us through a save? We know that you use your knee and elbow, but do you also use your body position and the throttle to take some weight off the front tyre?

Many people ask me this, even my team: what do you do?! It’s something that just happens with me. I lose the front and what I do is push down with my elbow. Then it depends on the situation: sometimes I open the gas, sometimes I just close the gas and I wait. But it’s so difficult to understand! 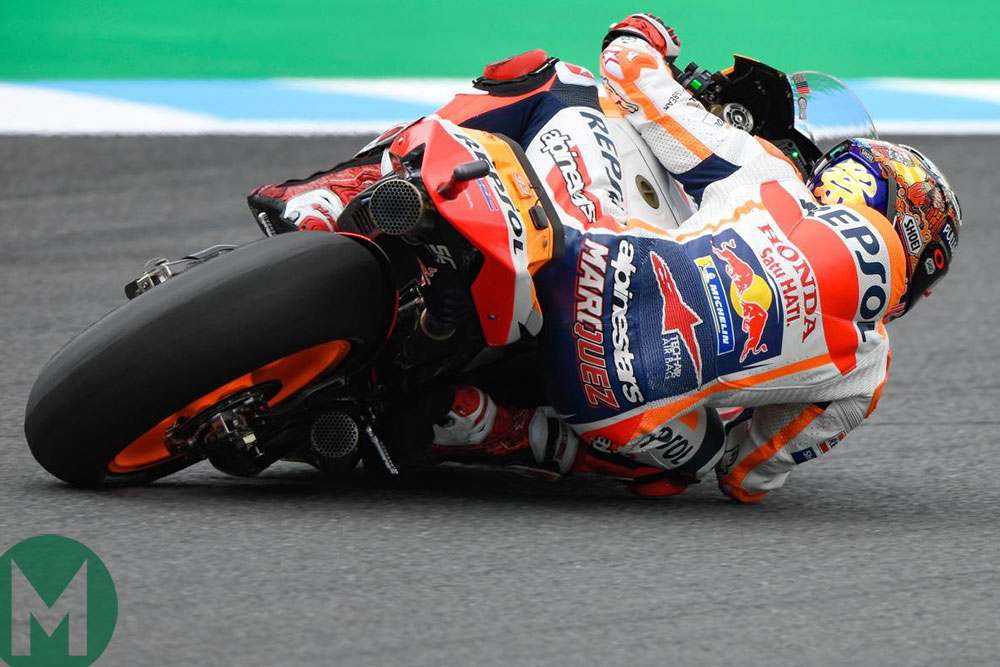 Do you use more corner speed now than in the Bridgestone years and has the shape of the corners changed as a result?

How do you get the bike turned now, because the Bridgestone front helped you to turn, so do you use the rear brake or the throttle?

It’s more about changing the geometry of the bike. When we changed from Bridgestone to Michelin I tried many things: I changed my riding style, I used more rear brake, I touched the gas earlier, I touched the gas later, I used less corner speed, I used more corner speed, but until we changed the geometry it was impossible. Now we use quite a lot of weight on the front of the bike, which leaves the rear of the bike more free. I feel better like this but maybe some other Honda riders go in the opposite way. Anyway, with a lot of weight on the front it seems like I can touch the gas earlier because the bike is more ready.

How does less weight on the rear make the bike easier to turn?

The thing with the Bridgestones is that we used more weight on the rear, because the rear was sliding more on the entry of corners and sliding more on the exits. With the Michelin you can forget a bit about this because the rear grip is always very, very good, so you can push with the rear tyre and then work on the front tyre. This is one of the reasons I always go for the hard option front for the race.

How good is the current traction control? Sometimes we see the rear tyre smoking, so are you doing this with your right wrist?

Yes, now it’s more in your hand than before. Like I said, before the control software we were able to use the TC a lot more to stop slides. Now the control is more in your hand. But also the Michelin rear spins in a completely different way compared to how the Bridgestone rear used to spin, so you must understand that the way to be fast is to let the Michelin spin a little, because the bike still pushes forward. But if you spin too much, the smoke comes! So you must find your own compromise without the TC, because the TC helps a lot less.

So when the Michelin rear spins it’s still hooking up and driving?

Tell us about the engine-braking control, because you don’t get as crossed-up on the brakes as you used to…

That’s because of the rear grip. The Michelin rear has better grip, so it’s more difficult to slide the rear and if you do have a slide then the slide is sharper, so if I slide on corner entry it’s a problem because the slide is too sharp and so I miss the apex.

One of your strongest points is that you are very adaptable to every situation. I remember Le Mans 2013, your first MotoGP race in rain, and you were the fastest rider on track after eight laps. How is this possible?

I think that one of the main reasons is motocross training. In motocross you can ride the same circuit all the time, but from the first run of the day to the last run of the day it’s always a different circuit. I mean, every lap is different, so you need to adapt! When you ride in the morning maybe it’s wet, so there’s more grip, then later in the day there’s less grip. It’s the same with dirt-track bikes: if you train with dirt-track bikes it’s different every time.

Do you think you could save so many front slides if you didn’t do dirt track?

No, I don’t think so. I started dirt track and motocross when I was five years old. With dirt track and especially motocross maybe you can save three or four crashes in one lap. And if you do crash, it’s okay because you just pick up the bike and continue and then you can find the limit.

How many different riding techniques do you use, because presumably you need several different techniques, depending on the corner, the grip and so on?

Of course. In some corners the best way is to brake very, very deep, then stop the bike and go. In other corners you try to keep more corner speed. It also depends on the tyres. For example, at Le Mans I was able to be aggressive all weekend because the tyres didn’t drop in performance after I’d ridden some laps. But somewhere like Mugello, as soon as I checked the allocation I could see that the front tyre was quite soft, so I knew I wouldn’t be able to push as hard as I wanted, so my riding style wasn’t the same as it was at Le Mans, because the tyres would not accept that. 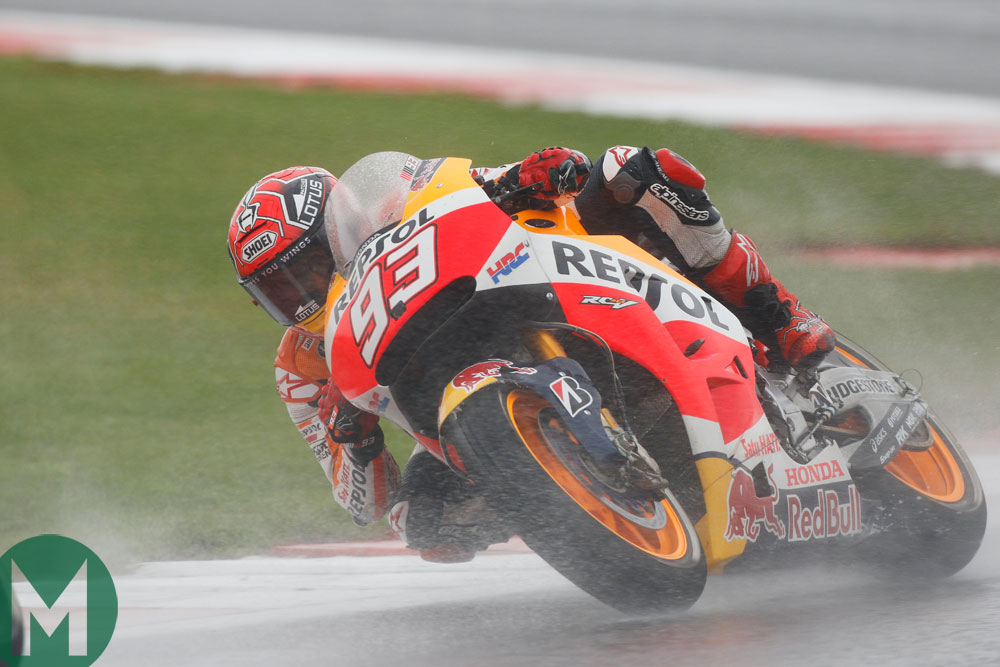 Back in the Bridgestone days it seemed like the riders and engineers knew more or less what to expect every weekend, but now it looks very different…

It’s for this is reason that everything is very equal between all the riders because each bike and each rider can maybe find the best option in the tyre allocation, so maybe one weekend is better for one manufacturer and another weekend is better for another manufacturer. With the Bridgestones we nearly always raced with the medium front and the soft rear, so everybody was using the same tyres. Now we all have a lot of options. Like at Jerez, some chose the soft rear, some went with the medium and some with the hard, and everybody was fast! This is one of the good things with the Michelins.

Do you like the fact that tyre choice is more difficult now, so you can use your brain and your skill to make the difference?

Working with the Bridgestones was easier, but the good thing with the Michelins is that maybe one tyre can save your weekend. Maybe you are struggling with the bike and everything, but before you get angry you need to understand all the tyre options, because if you have a problem then maybe you can find one good option and then your bike is working much better than the other bikes.

From the Archive: The reign of Spain

Do you know the term ‘in the zone’, it’s a psychological state: you’re riding so well that everything slows down and it seems like you save a slide almost before you have the slide?

Yes, I understand. Sometimes this happens, but not every time I ride. In a race I’m much more concentrated than in free practice. Of course in free practice you are concentrated and you are trying to be fast, but you are riding the bike thinking about the set-up: okay, now we should try this or we should try that… but you forget maybe the entry of the corner or something! But when you are racing on Sunday you just concentrate like this: be fast and don’t crash – you don’t concentrate on the set-up of the bike.

So when you are racing do you get that feeling that you’re almost not riding the bike, that it’s just happening with your subconscious?

Yes, always! Always the feeling is natural. I think it’s the same for all the riders. People ask me how I brake with the rear or with the front, how I downshift the gears, how I pick up the bike, but it’s all natural, you just do it.