Marc Márquez scored his biggest dry MotoGP win at the Argentine Grand Prix while Valentino Rossi saved his tyres to take second, which is where Cal Crutchlow should’ve finished… 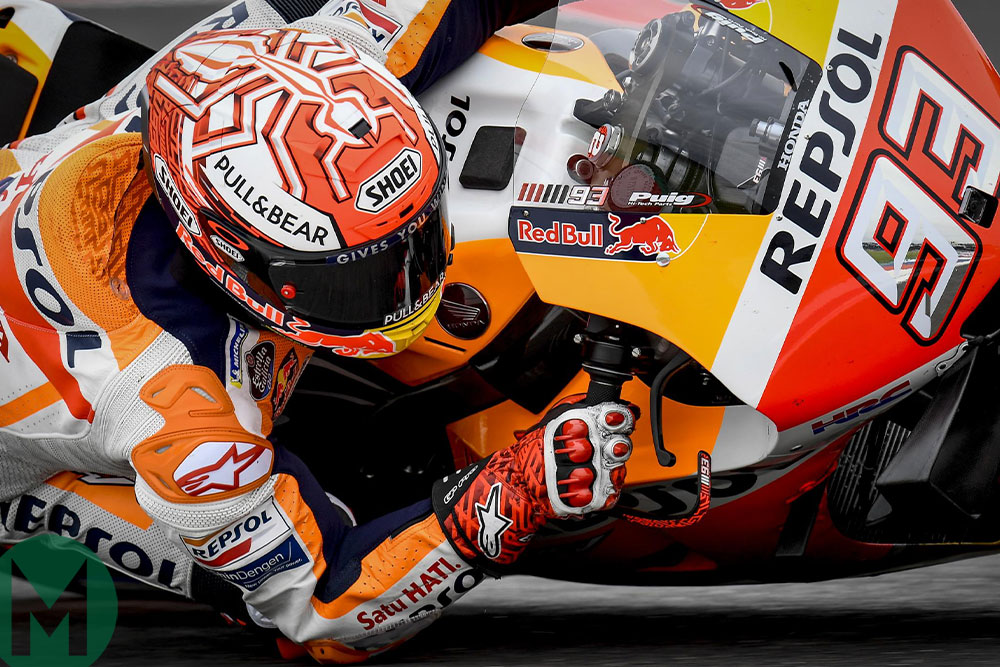 Another MotoGP race, another row about the rules.

In Qatar the argument focused on the guidelines relating to aerodynamic fitments. In Argentina the aggravation concerned Cal Crutchlow’s jump-start, which resulted in a ride-through penalty that probably cost the Briton a second-place finish.

During the race Crutchlow was the only rider to get within half a second a lap of runaway winner Marc Márquez. At the end of the race he was 31.4 seconds behind the Spaniard, when the cost of a ride-through is usually reckoned to be around 30sec.

MotoGP’s new chief steward Freddie Spencer – who rejected the aero protest in Qatar – copped a lot of flack for this decision. But the verdict and punishment were out of his hands, because the rules don’t give the stewards any possibility to use their judgement in such cases.

In the case of a minor movement and subsequent stop whilst the red lights are on, the designated officials will be the sole judge of whether an advantage has been gained.

If Crutchlow had jumped the start five years ago it could’ve been a different story, because the 2014 MotoGP rules allowed race direction some leeway.

Anticipation of the start is defined by the motorcycle moving forward when the red lights are on. The Race Direction will decide if a penalty will be imposed and must arrange for everyone to be informed of such penalty before the end of the fourth lap.

However, the rules were rewritten for 2015, following a number of incidents. Since then officials are only allowed to use their judgement if the rider makes a “subsequent stop” after a minor movement. Note the bold text.

In the case of a minor movement and subsequent stop whilst the red lights are on, Race Direction will be the sole judge of whether an advantage has been gained.

Race Direction will decide if a penalty will be imposed for taking advantage by anticipating the start and must communicate the penalty to the rider before the end of the fourth lap.

By way of contrast, here is the jump-start rule from the 1999 regulations, when the world was a simpler place. The entire 1999 rulebook numbered 48 pages compared to this year’s 347-page tome.

Any rider who anticipates the start will be penalised by being required to stop in the penalty area approved by the FIM Safety Officer. He must bring his motorcycle to a complete stop and remain stationary for 5 seconds. He may then rejoin the race.

Crutchlow’s movement at Termas de Río Hondo on Sunday was as minor as they get, but there was no subsequent stop. In this case the 2019 rules allow zero leeway on judgement or punishment, which requires a ride-through penalty and nothing less.

Were Spencer and his fellow stewards wrong? No. Is the law an ass? Possibly.

Crutchlow’s punishment didn’t fit the crime, at least when examined logically, rather than legally. However, the penalty is there in black and white, whether the jump-start was the result of a tiny throttle/clutch error or of anticipating the lights.

Years ago jumped starts weren’t such a big deal, because most races were won by many seconds, not by just a few tenths. Now a metre or two gained by the slightest anticipation of the lights might gain the perpetrator a couple of positions at the first corner, which could affect the end result.

Does the jump-start rule need to be rewritten once again? Perhaps there should be two different penalties: a long-lap penalty for minor movements and a ride-through for more blatant offences?

This would seem to make sense. However, it wouldn’t be that simple. All infringements would have to be exactly measured, with a minor movement quantified at, say, a maximum of five centimetres. Then, no doubt, there would be arguments if a rider jumped the start by 51 millimetres. How accurate is the grid camera? Can MotoGP prove it’s accurate to one millimetre? These things are never easy and rules can always be unkind.

British Superbike still leaves the decision to race direction, which is “the sole judge of whether an advantage has been gained and will decide if a penalty will be imposed”. This seems a sensible way to go, but again, what happens if a jump-start decides which factory wins the MotoGP world title. What then? Should that kind of a decision be left to an individual?

The whole idea of MotoGP’s grid cameras and no-room-for-manoeuvre regulation is to remove the decision from the naked eye and individual opinion; just like a photo-finish at the end of a race. In theory this keeps the officials safe from criticism. But apparently not in reality.

Crutchlow had good reason to be fuming, but he’s got a proper racer’s psyche, so he will already be focusing on the positives of the weekend.

The positives are as obvious as the negative. There’s now no doubt that the 33-year-old has the chance to record his best-ever season this year, never mind the 20 points he’s just lost. Last year Ducati seemed to have the best bike, with only Márquez able to regularly make the difference aboard an RC213V, but this year HRC has taken another major step forward.

Honda’s 2019 bike had the best top speed in both Qatar and Argentina, which is significant, because during the 54 races of 2016, 2017 and 2018 the RC213V led the top-speed figures on just four occasions. And all of those were last year. During 2016 and 2017 the Honda was never fastest, because HRC had given away peak horsepower in search of friendlier power delivery through a big-bang firing configuration and reverse-rotating crankshaft.

Obviously top speed alone doesn’t win races, but it certainly helps. As Márquez says, time gained on the straights is “free time”, because it takes no effort or risk from the rider. In the past, Márquez had to brake later and enter corners faster to reduce the advantage the Ducati gained in a straight line.

HRC has further reduced the risks Márquez and other Honda riders have to take in corner entry by also working at soothing the RC213V’s front end. Previously the bike’s aggressive balance, geometry and load transfer had forced riders to choose the hardest-option front tyre, whether they liked it or not.

The harder the tyre the less warning it gives as it reaches its limit, hence the RC213V’s tendency to unseat its riders during corner entry. Many of Márquez’s crashes in recent years came while using the hardest tyre in practice, trying to ascertain its limit before the race.

During the offseason adjustments to the RC213V’s geometry, fork internals and triple clamps have allowed Honda riders to stress the front tyre less and sometimes choose a softer front tyre. Márquez used the hard on Sunday, as did all but two other riders, but in Qatar he was able to race the medium, which wasn’t the case in 2018.

Triple clamp flex is an important factor in front-end feel. Yamaha started using slotted triple clamps many years ago, to allow flex at high lean angles to get better feedback from the front tyre. Most factories now use similar designs (the exact details usually hidden by carbon-fibre covers), but not HRC, which instead machines some sections of its triple clamps to a few millimetres thick. 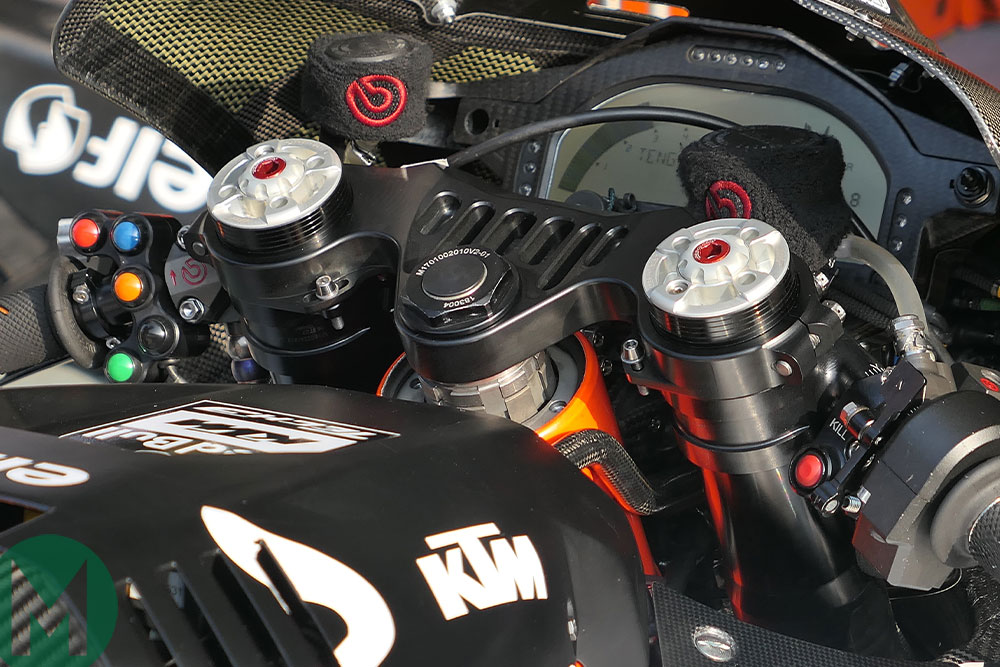 Whatever the improvements, they allowed Márquez to score the biggest dry-weather victory of his MotoGP career on Sunday. During the race he took at least half a second out of the pursuing pack pretty much every lap – his one lap advantage in Argentina would’ve covered the first four riders at the end of the race in Qatar!

Of course, Márquez revels in the Termas layout. It’s just his kind of racetrack: fast, ballsy and tricky. And after what happened there last year he had a point to prove. The man who loves to battle decided to check out from the start and remind everyone what he can do. It’s worth remembering that if he does win this year’s title it will be his sixth premier-class crown and his eighth in total, just one short of Valentino Rossi.

Undoubtedly Márquez will not dominate at tracks where the Ducati works better, but already 2019 looks like another year when it’s his title to lose. He is simply too good and now the RC213V is a better friend than it ever was.

Rossi’s second place, 23 years to the day since he commenced his world championship career at Shah Alam in Malaysia, was much needed, both for him and for Yamaha.

Throughout the weekend the Italian and team-mate Maverick Viñales complained they still lack something to fight with the Hondas and Ducatis, mostly corner-exit drive and tyre life. But a few final tweaks and his race face made the difference for Rossi.

By lap 14 Rossi already seemed to be running out of traction because he couldn’t find enough drive out of the long right-hander onto the back straight, which allowed Andrea Dovizioso to rocket past into second place. After that Rossi sensibly decided to follow Dovizioso, rather than attack him.

This allowed Dovizioso to run his best lines, which helped the pair pull clear of the rest of the pack. This tactic also allowed Rossi to save his tyres, rather than burn them up trying to overtake. And it allowed him to make an exact study of Dovizioso’s weak points and strong points, all the way to the last lap.

Sure enough, Rossi understood that his biggest advantage over the Ducati was in corner speed. Through the long, sweeping Turn Six left-hander he was several miles per hour faster than Dovizioso, which allowed him to go round the outside and put himself on the inside as they hit the brakes for the Turn Seven right-hander. It was a perfect move and ended his longest absence from the podium since his Ducati nightmare.

Next it’s the Circuit of the Americas, where Márquez has never been beaten and where the Ducati and Yamaha are never at their best.