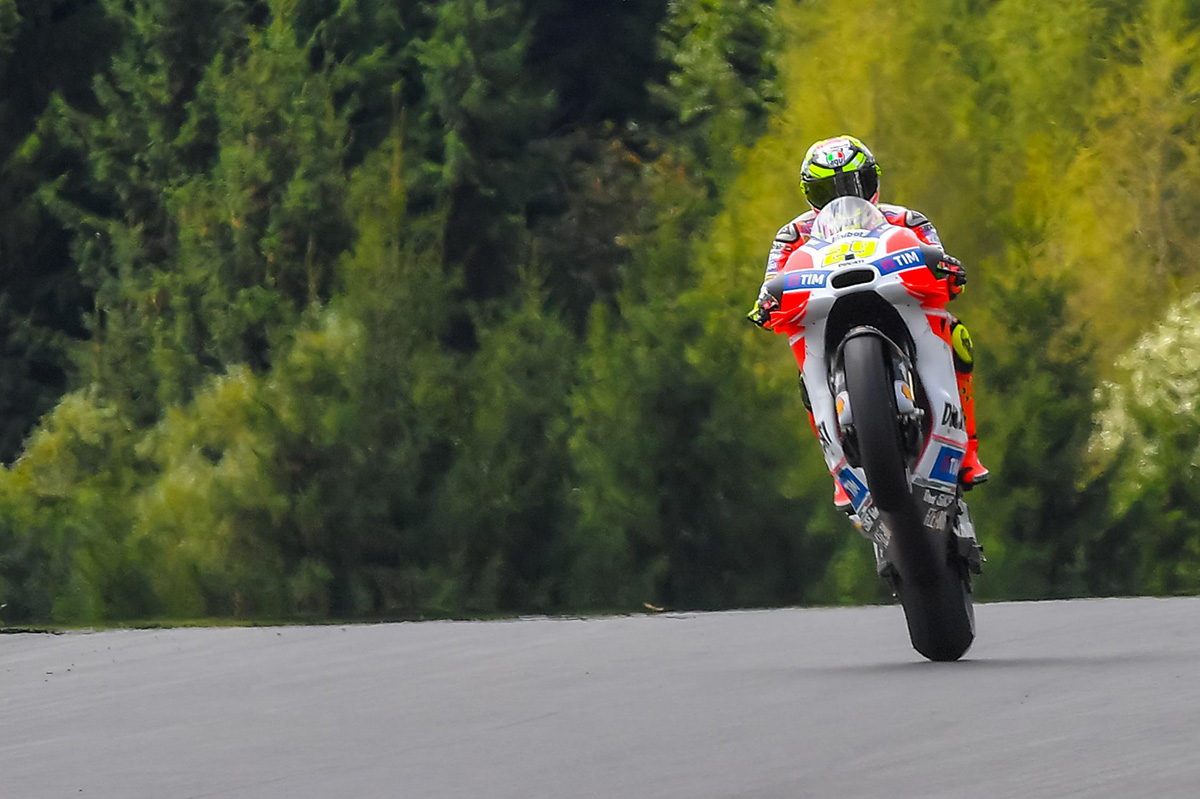 He fitted the role particularly well after he secured pole position on Saturday, strutting and pouting his way around parc fermé like he owned the place, which he kind of did.

Iannone is red in tooth and claw, which is great, unless you have to share a racetrack with the guy; like Andrea Dovizioso and Jorge Lorenzo, who he torpedoed in Argentina and at Catalunya, and Eugene Laverty, who he very nearly took out during practice in Austria. And don’t forget the unfortunate seagull at Phillip Island last year…

The 27-year-old Italian has never had any pretensions about being the good guy. Just a few weeks ago on social media he threatened to kill anyone who causes him bother. I can only hope he was talking murder metaphorically, especially if he ends up reading this. 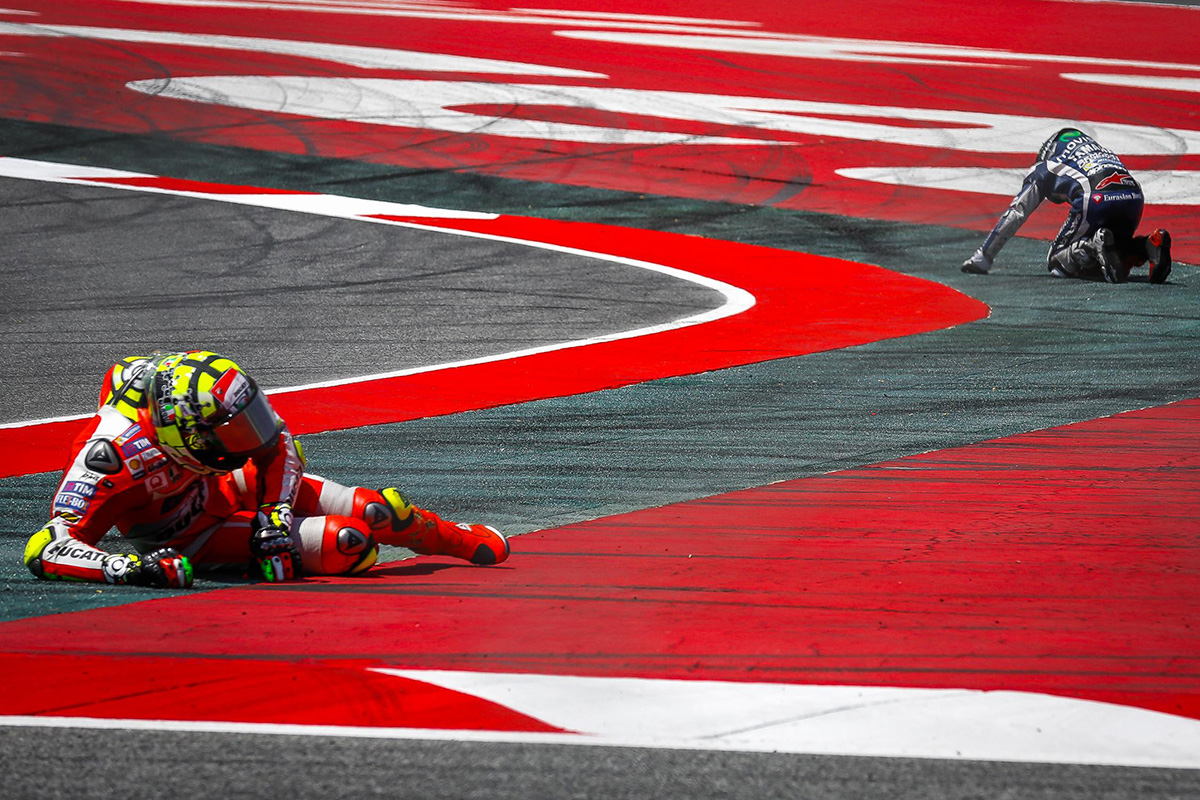 Iannone has always been badly behaved. He first came to the notice of many people at Misano in 2009, when he took out 125cc race-leader Pol Espargaro and himself with a maniac move (now there’s a surprise) at the final corner. When the pair fronted up to each other in the gravel trap Iannone head-butted his victim for good measure, then declared on live Italian TV, “I hate all Spanish people”. He was fined several thousand Euros for these misdemeanours.

When Iannone first arrived in the paddock he had a glint in his eye like a backstreet assassin from Naples. He still does. Over the years he has worked hard at building his reputation and now everyone is wary of him: look out here comes Iannone. This is nothing new in bike racing.

“Intimidation is what it’s all about,” said five-time premier-class champion Mick Doohan some years ago. “If you do that kind of stuff enough, it gets to the point where people know as soon as they see you: ‘I may as well shut down now because it’s not like he’s going to do me any favours’.”

Someone joked last weekend that Dorna’s much-discussed dashboard communications system should include an IPW warning light, for Iannone Proximity Warning. In other words, here he comes, save yourself!

Iannone joined the Moto2 series in its inaugural year in 2010 and was perfectly suited to the harum-scarum new championship which in its first few seasons was all about clashing elbows and fairings. “I love to overtake when it’s tight,” he said. “You breathe in as you go past!”

Since graduating to MotoGP in 2013 he has proved that he really can ride a bit, even though he’s still as mad as he ever was. Many of his rivals insist he is a danger to them and they may well be right. 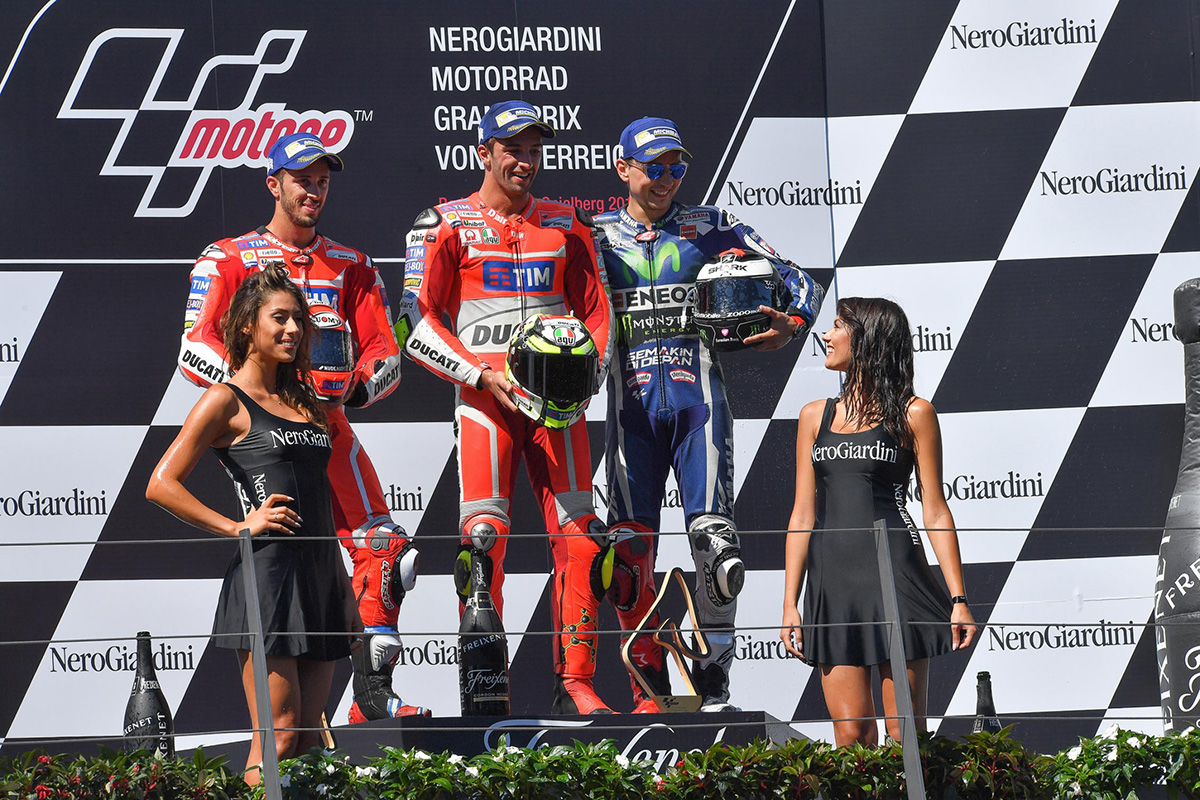 In the early days Iannone’s leathers carried the nickname “Crazy Joe”, dreamed up by schoolmates because he crashed his scooter so often. A few years ago he changed his moniker to “The Maniac”; presumably with essentially the same meaning. But his cigar-chomping, black-out-shades-wearing manager Carlo Pernat told me this wasn’t not the case.

“Andrea is not a maniac in riding,” Pernat said, with a perfectly straight face. “He is a maniac of precision.”

My Italian dictionary seemed to support this unlikely claim – “Maniaco” means obsessed by something, or crazy about something – and I naively fell for this explanation.

Only later did I found out that “Maniac” refers to a certain part of his anatomy, and it’s not his throttle hand.

A while back a colleague asked Iannone what he does during the winter. “Train and fuck,” came the reply.

Iannone isn’t shy. He’s forever tweeting photos of himself showing-off his muscles, climbing aboard private jets and hanging out with exotic young women in exotic locations. There’s little doubt he’s aware that such ostentation annoys a lot of people and you just know he loves that. He is all boxing-ring swagger, flashing and flaunting his riches. 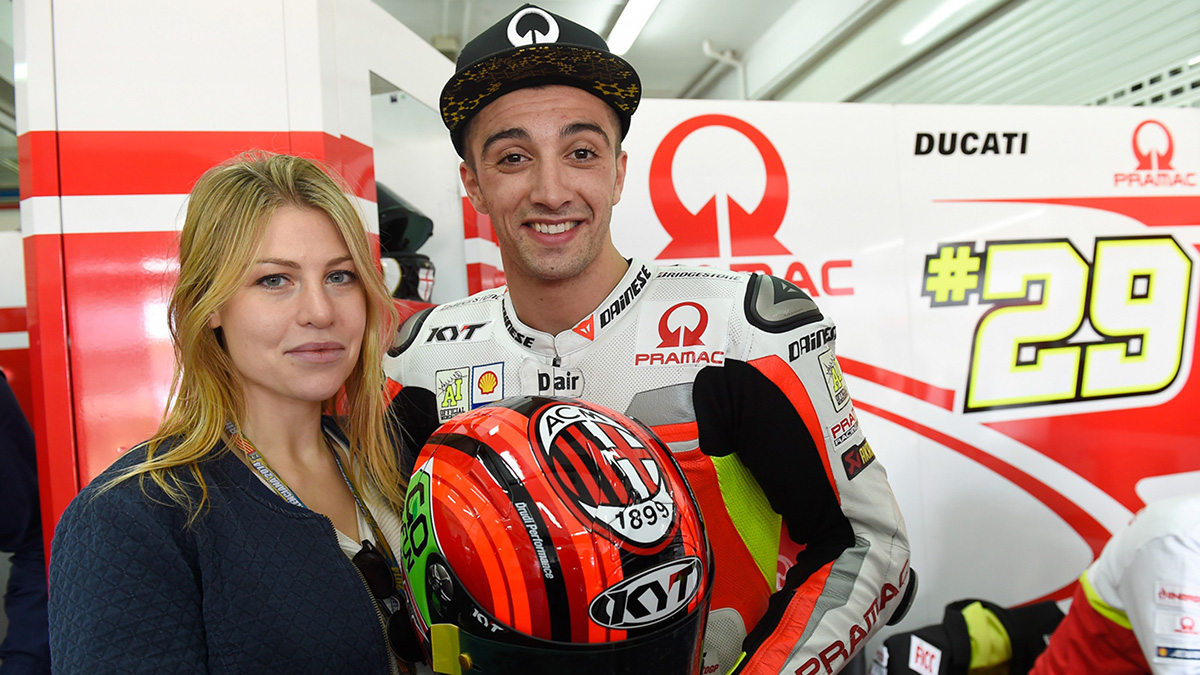 His website is worth a visit because it is genuinely amusing, which isn’t something you can say about most racers’ websites.

“Gather round,” it starts. “My name is Andrea Iannone.”

“I’ve got tattoos, rings,” it continues. “People think I’m a show-off. But I’ve been giving them hell for years. To get here. I started racing because Angelo was doing it. My brother. Blood runs thick. When we used to argue, my father would give us boxing gloves and lock us inside a room. When the room grew silent he would open the door and put us in bed, exhausted. My father believed in me. I owe him everything. Do you understand? Everything.”

“I’ve learned to divide up the beast of Andrea,” it goes on, alluding to The Maniac. “The beast comes out when there aren’t races and I can allow myself to do it. Otherwise I’m professional, concentrated. A machine. If you don’t believe me, come experience it with me, feel for my ways and everything will go… PISS OFF!” (For the full ‘poem’ see below.)

Despite all this preposterous posturing and despite his rampant self-love and machismo, in fact because of it all, I like him. He’s a pantomime villain and a nutter – both on and off the racetrack – and motorcycle racing needs nutters.

Gather round.
My name is Andrea Iannone.
Motorcycle racer. Currently for Ducati, official team, MotoGP.
I’m from Vasto, born in 1989.
August ninth.
I’ve got tattoos, rings. People think I’m a show-off.
But I’ve been giving them hell for years. To get here.
I started racing because Angelo was doing it. My brother.
Blood runs thick.
When we used to argue, my father would give us boxing gloves and lock us inside a room.
When the room grew silent he would open the door and put us in bed, exhausted.
My father believed in me.
I owe him everything. Do you understand everything? Everything.
On my first day of elementary school he said: “If you come home with bruises, then you’ll get even more.
And remember that whoever starts it gets it twice as hard. “
So if someone got on my nerves, I’d have a go.
And I’d go nuts.
At a certain point he told me: what do you want to do, hang out with friends or be serious?
He sold everything to support me.
At 15, 2004, I was racing in both the Italian and Spanish championship.
I had a rough start, picked myself up, and with a few laps to go I fell. Because I didn’t know how to control myself. I wanted to overdo it.
It’s just who I am. I know no limits.
If I play cards I want to win even if I don’t know the rules.
And if I lose I cry.
If you don’t believe me, come experience it with me.
Feel for my ways, and everything will go…

They expelled me from private school.
I would open my friends’ rooms with calling cards.
If they didn’t let me go out, I would escape.
It’s always better to apologize than ask permission.
I’ll explain why later.
In the following season I made it to the 125 cc World Championships.
The first race I won was on 4 May 2008, in Shanghai. It was the greatest day of my life.
For now, of course.
The bike from that race is in my shed, in my headquarters, in Vasto.
My life lies in there.
I listen to Vasco. I listen to Club Dogo.
My favorite line is: “I break crystal glasses because I’m the best at doing it. “
Do you understand it?
You have to find your talent, whatever it is.
From 2010 to 2012 I raced in Moto2.
Then in MotoGP, Ducati Pramac Racing, two years.
I learned hear how to roll with the punches, be patient, work towards a goal.

I like my life.
I like how I dress.
I like my house in Vasto Marina.
In my shower I’ve got a mosaic portraying a dream girl.
In my living room a powerful stereo system.
I like my motorhome, the Audi RS6 Biturbo which I drive, it’s a powerful one.
I like the sound it makes when I down-shift: it seems like firecrackers.
I like going out with my friends, small in numbers, trustworthy.
I like keeping my word.
I’ll goof off one hundred times over, but if the one hundred and first time I give you my word, you better believe I’ll keep it.
I like adrenaline, speed, when I pull ahead when I overtake.
I hate being touched.
I get up late.
I eat late.
I go to bed late.
Then I train.
My motto is: dare. Always dare.
I’ve learned to dare so that when the right moment comes I’ll be ready,
it’ll be a joke. And because of this it’s better to apologize than to ask permission.
I’ve learned to speak my mind, even if it hurts.
I’ve learned to divide up the beast of Andre. The beast comes out when there aren’t races and I can allow myself to do it. Otherwise I’m professional, concentrated.
A machine.
If you don’t believe me come experience it with me
feel for my ways
and everything will go…
PISS OFF!