As Marc Marquez edges closer to a fifth world championship in seven seasons, we remember six of his greatest rides 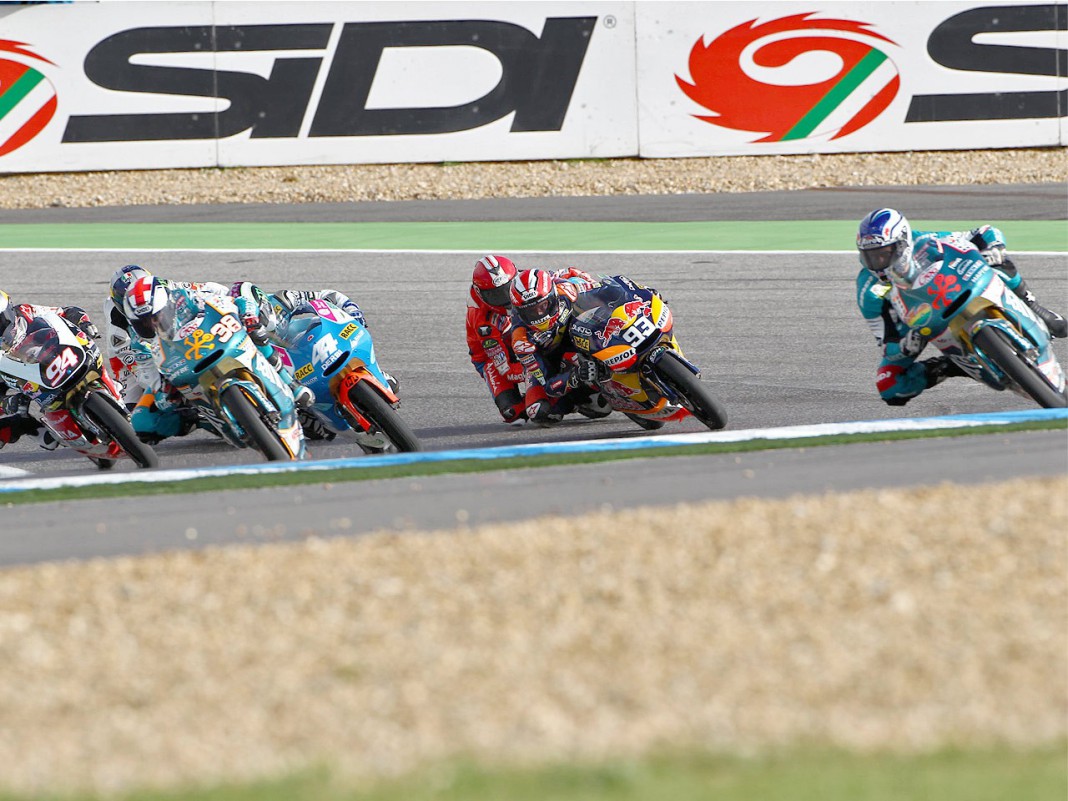 This was the first of many times we’ve seen Marquez grab victory from the jaws of defeat. For many people it was the day he served notice of his genius and also of his astonishing ability to keep a cool head in the midst of chaos.

Estoril was the penultimate round of the 125cc world championship, which the 17-year-old led by a few points from the more experienced Nico Terol. It rained all weekend, causing a record 128 crashes over three days. The 125 race was red-flagged after another dozen riders went flying and was restarted on a still-damp track. At the last corner of the sighting lap, Marquez also fell. He remounted and dashed back to the pits, where mechanics frantically replaced a bent handlebar, broken throttle and smashed fairing, but the work took too long for him to take his place at the front of the grid, so he had to take the restart from last position.

No matter. By the time he flung his Derbi into the first corner he was already fifth, taking the kind of risks for which he would soon become famous. He spent the rest of the race playing with Terol and Bradley Smith, administering his coup de grace on the final lap. A week later he wrapped up his first world title. 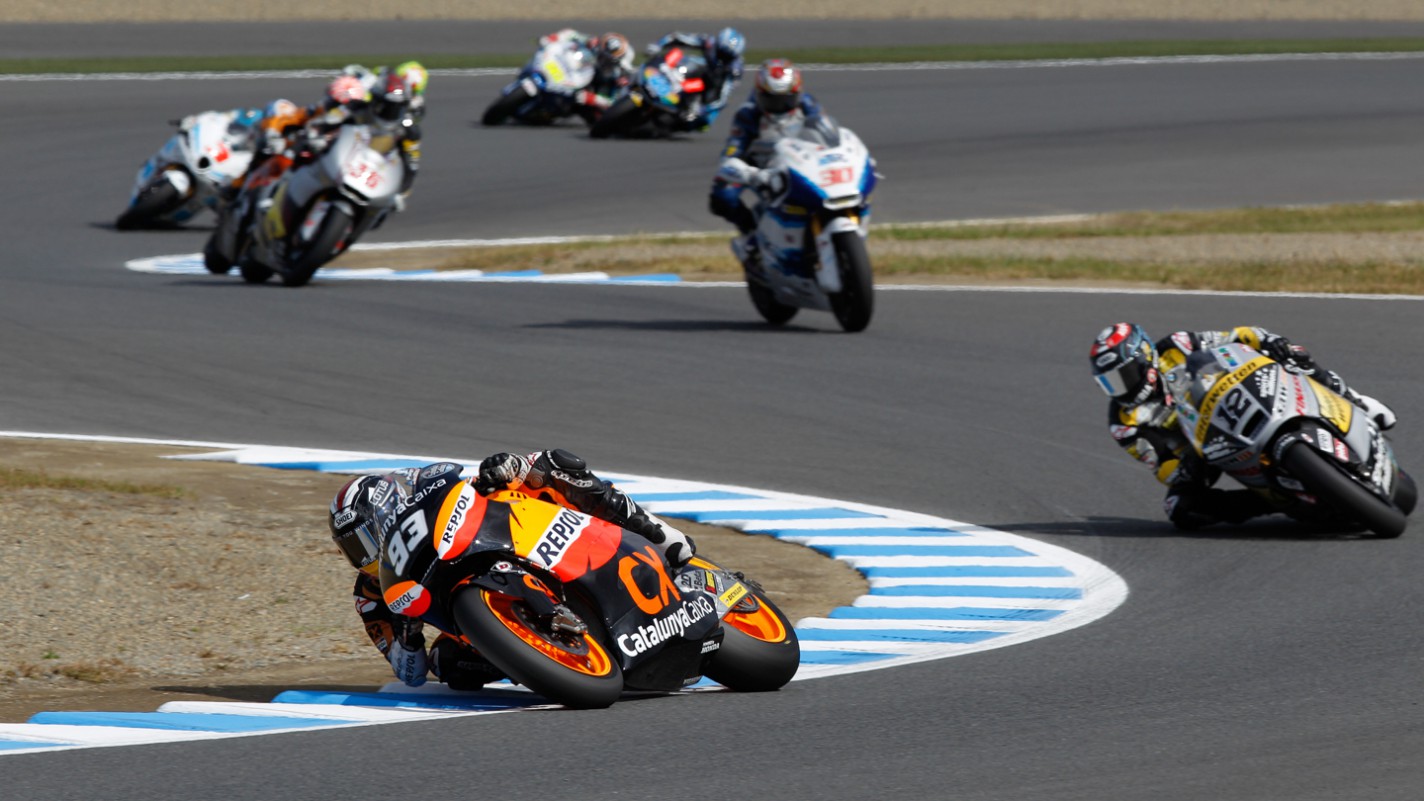 There are very few things scarier than sitting stationery on a grid while several dozen motorcycles rip past left and right, barely inches away. You sit there helpless, awaiting the worst – another bike ploughing into your backside at 80mph. It’s quite unsettling.

This is what happened to Marquez at the start of this race: he failed to engage first gear correctly, so when the lights went out he dumped the clutch and went nowhere. By the time he made it to the first corner, 28 of the 32 riders were ahead him. During the first lap Marc the Merciless overtook 19 of them!

In the next nine laps he dealt with the eight riders ahead of him to take the lead and win the race. This was a greater ride than his later Valencia victory from the back of the grid (punishment for knocking down a rival during practice) because he had had no chance to plan his fightback and because the way he kept his cool after that start-line disaster was special. 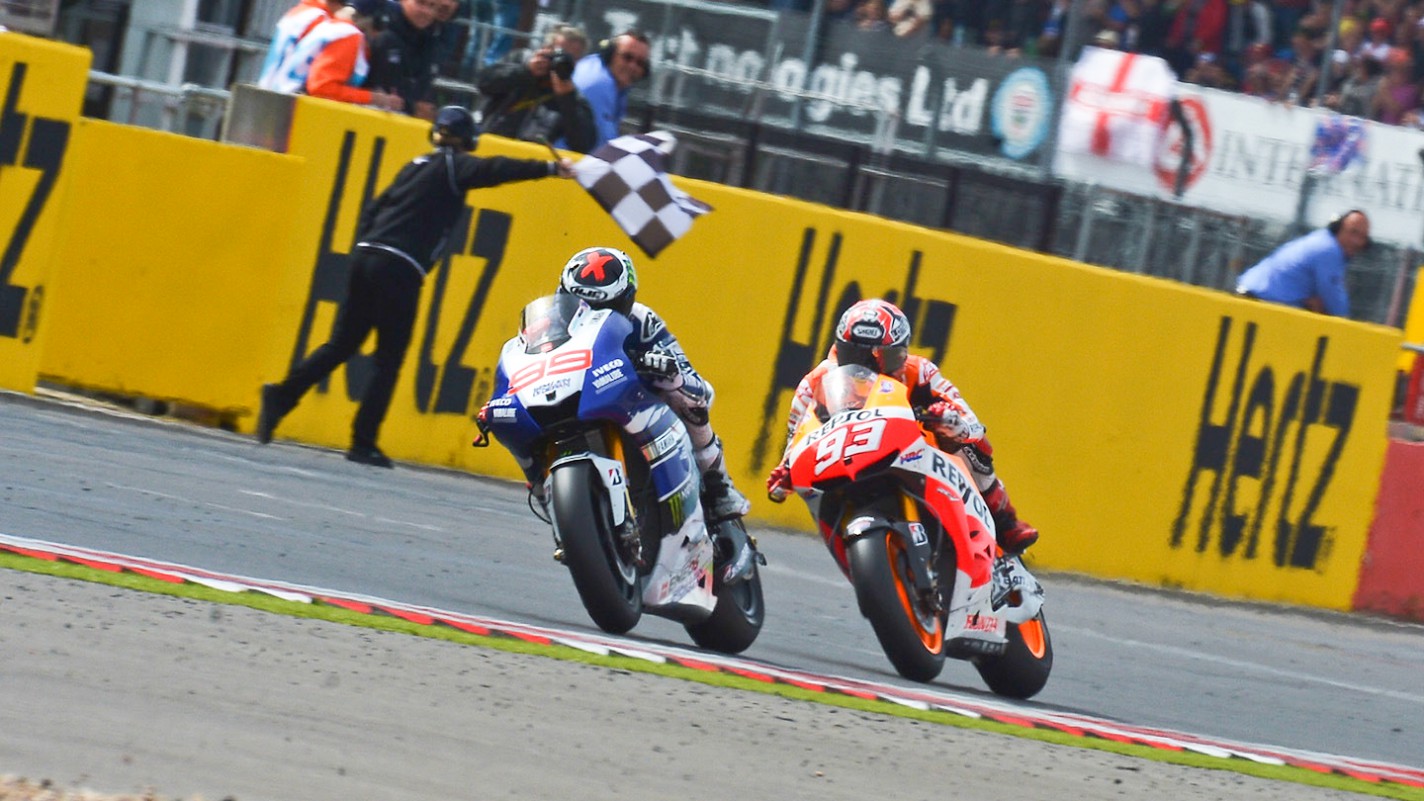 Marquez didn’t win this one but nonetheless this ride stands out as heroic. During morning warm-up the 21-year-old crashed heavily, dislocating his left shoulder; the kind of injury that would have you or me off sick for a month.

Less than four hours later, full of painkilling pills and injections and with the shoulder heavily strapped, Marquez raced head to head with Jorge Lorenzo. He let the reigning champ do most of the work, leaving his attack until the final stages, by which time the shoulder was past its best. He got ahead with three laps to go, but Lorenzo was soon back in front. Surely, that was it?

Not quite. Marquez pounced with three corners to go, at the Brooklands left-hander, his RC213V skittering sideways as he stole Lorenzo’s line. But when he flicked right into the penultimate corner at Luffield the shoulder let him down. He ran a few inches wide and Lorenzo was in there, lifting Marquez as he squeezed through to win by eight hundredths of a second.

Watch / On the Database

Marquez and Lorenzo have enjoyed (and sometimes not) many a duel, but few races have had them this close all the way: outfoxing each other through Mugello’s glorious curves, disputing the lead at every corner. For the last third of the race they were never separated by more than a tenth of second, Marquez’s marginal top-speed advantage always cancelled out by Lorenzo’s marginal corner-speed advantage.

They swapped positions, bumped and barged, bounced over the kerbs and nearly ran off the track. The pair’s undying tenacity and total refusal to even think about waving a white flag was reminiscent of Wayne Rainey and Kevin Schwantz at the height of their grudge match 25 years earlier.

This was Marquez at his wild best. He rides the bike loose because when the bike moves around it’s telling him what it’s going to do next, so he’s ready to react. He nearly always looks out of control but rarely is.

He took the lead as the pair started the final lap, front wheels lifting through the 210mph kink before the first corner. From there he never gave Lorenzo a chance, crossing the line 0.121 seconds ahead. 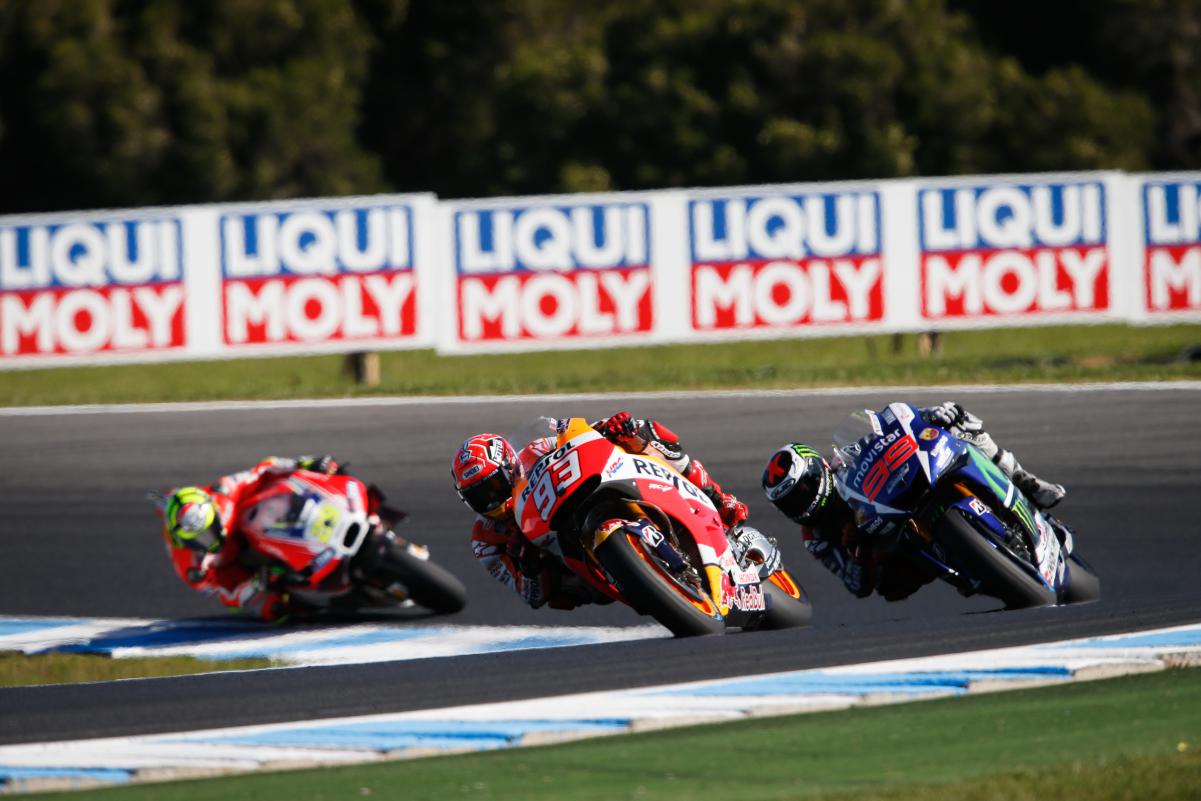 This wasn’t just one of Marquez’s greatest races, it was arguably the greatest race of MotoGP’s four-stroke era. Phillip Island is fast and wide, so there was plenty of room for Marquez to mix it up with Lorenzo, Andrea Iannone and Valentino Rossi.

For a while it looked like Lorenzo was clearing off, but Marquez closed him down and took the lead at two-thirds distance. However, he was riding too hard and had overheated his front tyre, so he had to ease off for a while. That brought Iannone and Rossi back into the lead group, the two Italians spending much of the race tripping over each other.

At the start of the final lap it was Lorenzo, Iannone, Marquez and Rossi, covered by less than a second. Marquez twice overtook Iannone in the first few corners, then set off after Lorenzo, closing a half-second gap in seven corners, then pouncing ahead of his compatriot to win by two tenths. 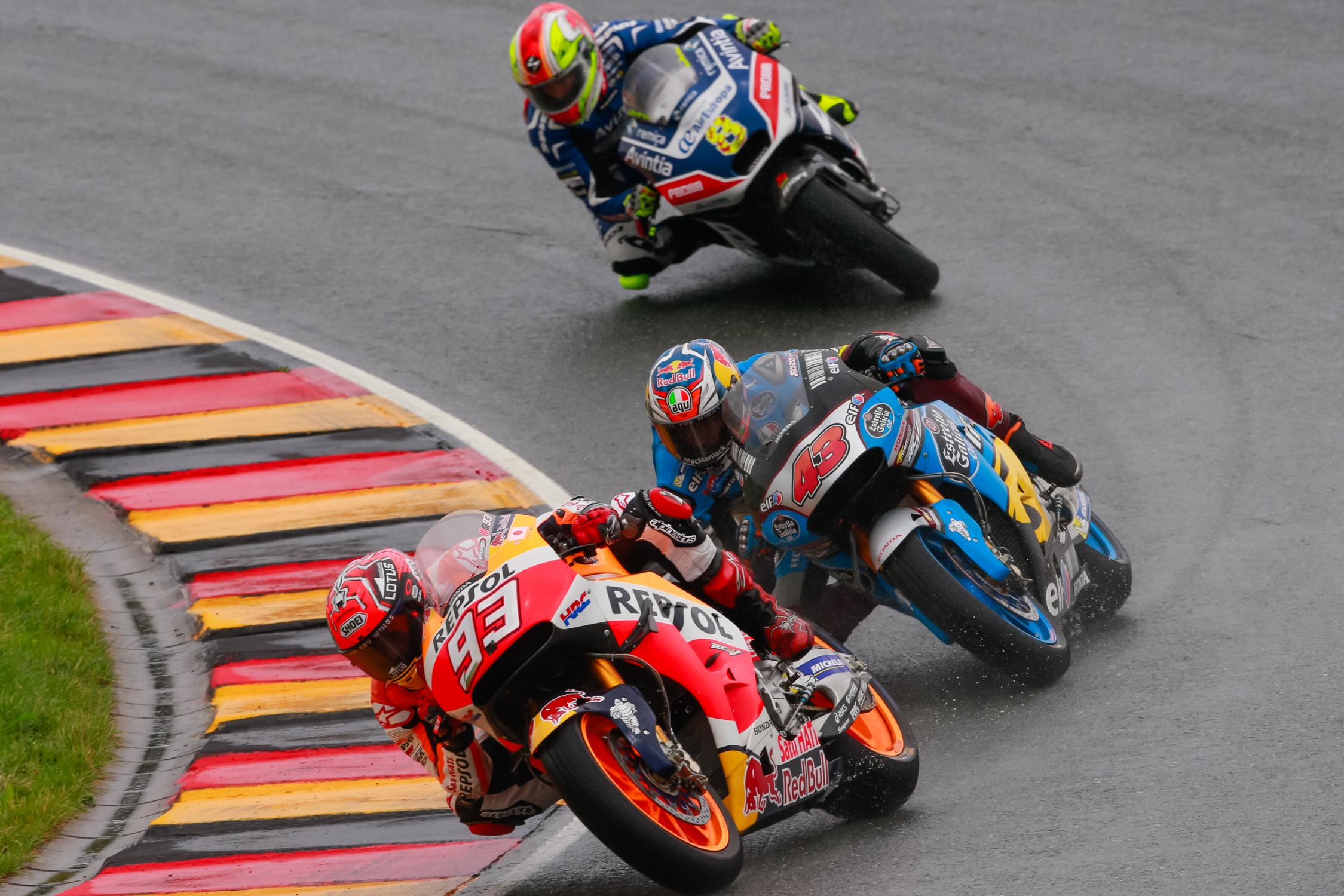 They say fortune favours brave but of course they forget the times it doesn’t. This time it did. The race started on a fully wet track, everyone on rain tyres, Marquez risking an extra-soft front. The gamble worked well during the first few laps but soon the tyre was overheating, working more like a marshmallow than a race tyre.

By one-third distance he had dropped to eighth, then he nearly crashed, running off the track at high speed, rodeo-riding through the gravel dirt-track style. He now knew his only hope was to risk switching to slicks front and rear. He was the first to do so, moments before Pol Espargaro, who lasted two corners before crashing.

When a racetrack is cold and damp it’s not easy to get the tyres hot enough to grip the road. It’s a Catch 22 situation: ride too hard to generate heat into the tyres and you crash, ride too slow and the tyres won’t get hot so you will crash. Marquez was 14th as he walked this line on a track that was still damp in places and almost dry in others. When the chequered flag came out he was ten seconds ahead of the next man.

Scuderia on the slide, Perez eating mammoth stints for breakfast and oscillating off-road surfaces – here's what was going up and down at the the 2021 French GP