Marc Marquez looks like he’s cruising to title number three, but is it really that simple? 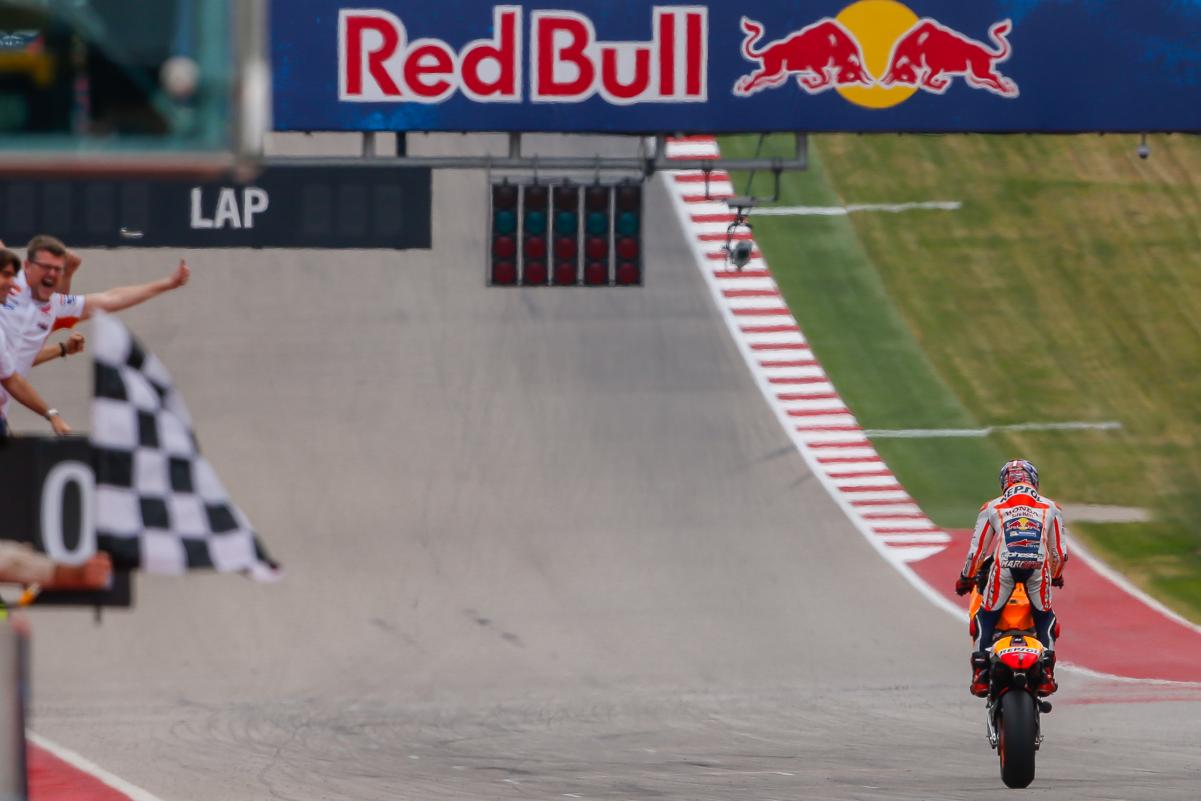 MotoGP 2016 reaches two-thirds distance at Silverstone this weekend: round 12 of 18.

Marc Marquez goes into the race, which last year he failed to finish, holding a 53-point lead over Valentino Rossi. It would appear to be game over: even if Rossi or Jorge Lorenzo win the last seven races, Marquez can afford to finish second or third at every race and still take home the title.

But, in case you hadn’t already realised, this is motorcycle racing, so anything can happen. Marquez’s practice tumble at the Red Bull Ring – where he fell heavily trying to avoid a cruising Dani Pedrosa – showed how easy it is for riders and championships to be turned on their heads. Marquez went down like a sack of potatoes and was lucky to avoid the kind of injury that could have put him out of action for the Austrian and Czech GPs. And that was free practice, he wasn’t riding the edge, he just got caught up in a bit of a freak accident at a low-speed corner. In bike racing, it’s never over until it’s over.

That crash very nearly brought him undone, even though Marquez is a different man this year – no longer the win-or-bin-it, rostrum-or-hospital rider he used to be. Even during preseason testing he announced that he would approach 2016 differently.

“At the end of last season I analysed my championship a lot – I crashed in six races, so I made too many mistakes,” he said at Sepang in February. “OK, so now I know I have to finish these races to finish the season in a good way, I have to avoid mistakes.” 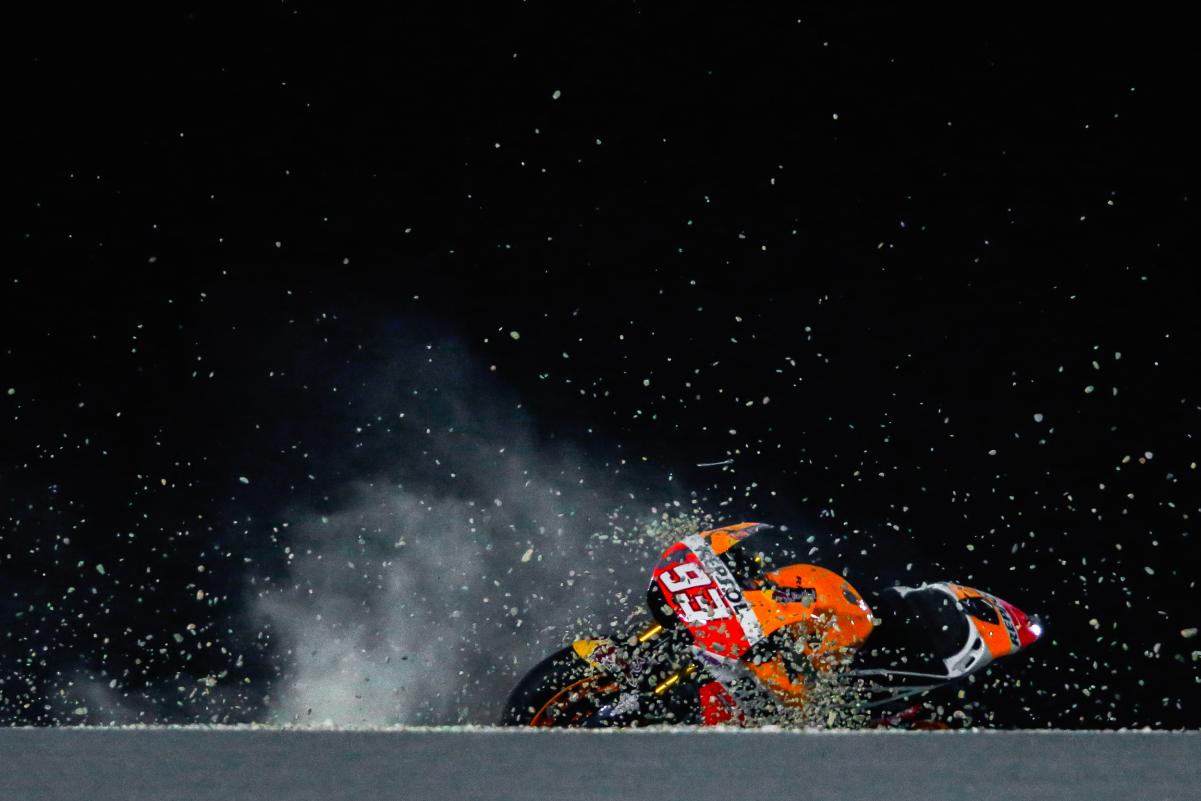 It may seem odd that the 2013 and 2014 MotoGP champ needed a season like that – hitting the deck in one third of the races – to acquire a championship strategy, but in fact it was his first difficult season in MotoGP.

“I arrived in MotoGP in 2013 feeling really great on the bike, which was really competitive compared to the Yamaha. Then my second season was even better. Last year was the first time I really struggled with the bike and at the beginning I didn’t understand that me and the bike didn’t have enough performance to win races. You come from two great seasons, you start a new season and you think, what’s happened now, why can’t I win? So I tried too hard.”

So far this season he has ended up on the second and third steps of the podium more than even before, because he knows 20 points or 16 points is much better than a big fat zero after risking it all to score 25.

Marquez also knows he doesn’t have the best bike this year, but he is proving that a tactical mindset can more than compensate for a slight lack of performance. 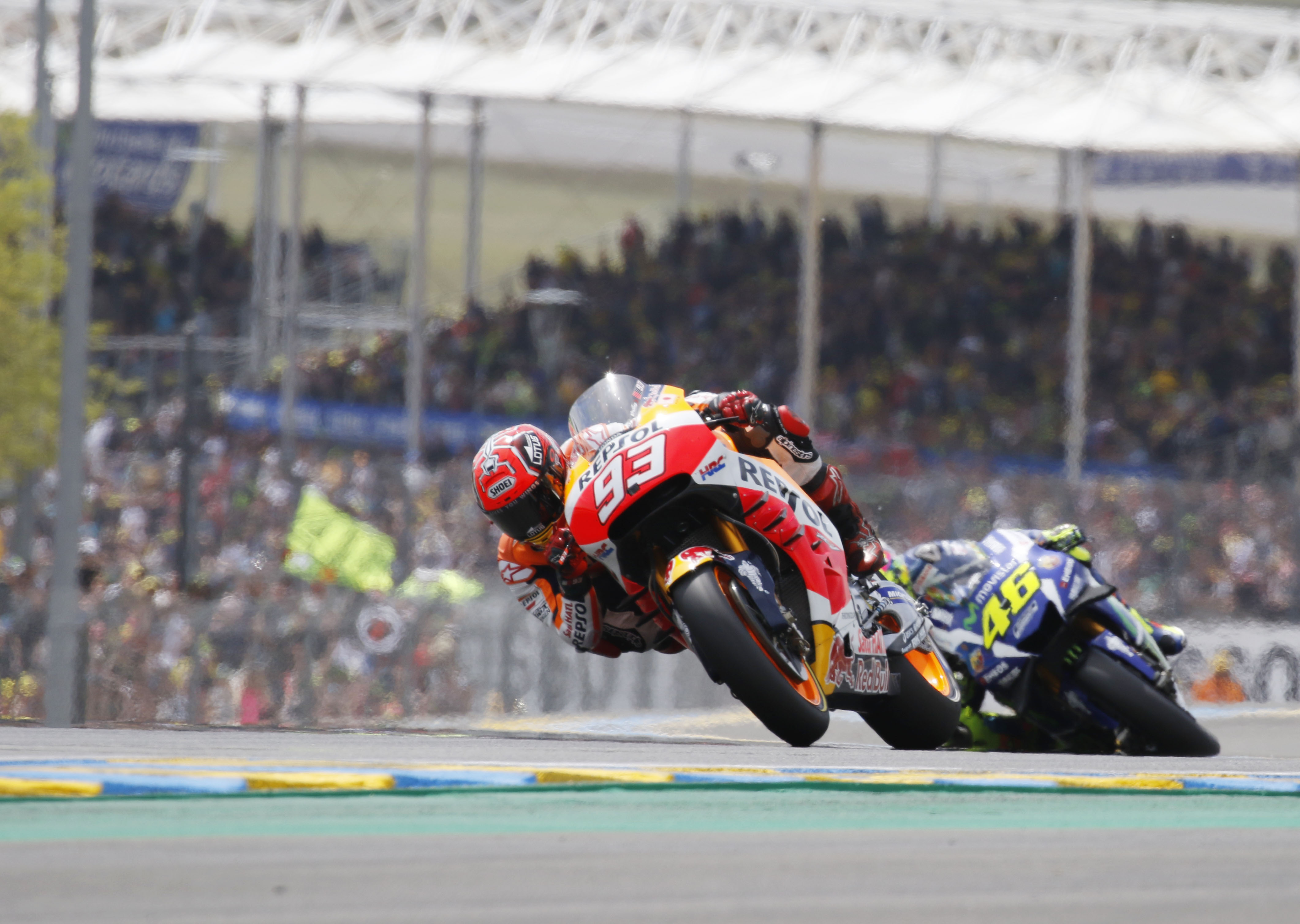 On the other hand, while Yamaha’s YZR-M1 is the best bike, it’s crucially let down by a lack of front grip on wet or cool asphalt; a real problem which wouldn’t have been such an issue without three consecutive races run in cool, damp conditions.

While Marquez has used his newly developed strategic mentality to rack up points, HRC has been quietly tweaking away, bridging the gap between the RC213V and the M1.

Its biggest job has been fixing the same-for-all Magneti Marelli rider aids. During past seasons Honda had the best electronics in MotoGP, so this year it’s taken the biggest step down.

There’s been much talk about the 2016 RCV’s (relative) lack of acceleration, but this isn’t so much a horsepower issue as an electronics and traction issue. There’s no good having all the power in the world if you can’t put it to the ground. MotoGP’s new control electronics are less sophisticated and have slower processing speeds.

Using Honda’s traction control system Marquez and his engineers could almost always find the ideal slip-ratio, so he could rocket out of a corner with the rear tyre spinning just enough to help him finish the corner while still getting maximum drive. The Magneti Marelli traction control isn’t that clever and it’s also milliseconds slower, so Marquez has struggled with the TCS cutting in and out, one moment providing not enough spin, the next moment too much, as the system tries to reduce horsepower by closing the throttle butterflies, retarding the ignition or cutting one of more cylinders. In the end, like most riders, he has realised that once HRC has got the best out of the software he’s got to do the real work himself. 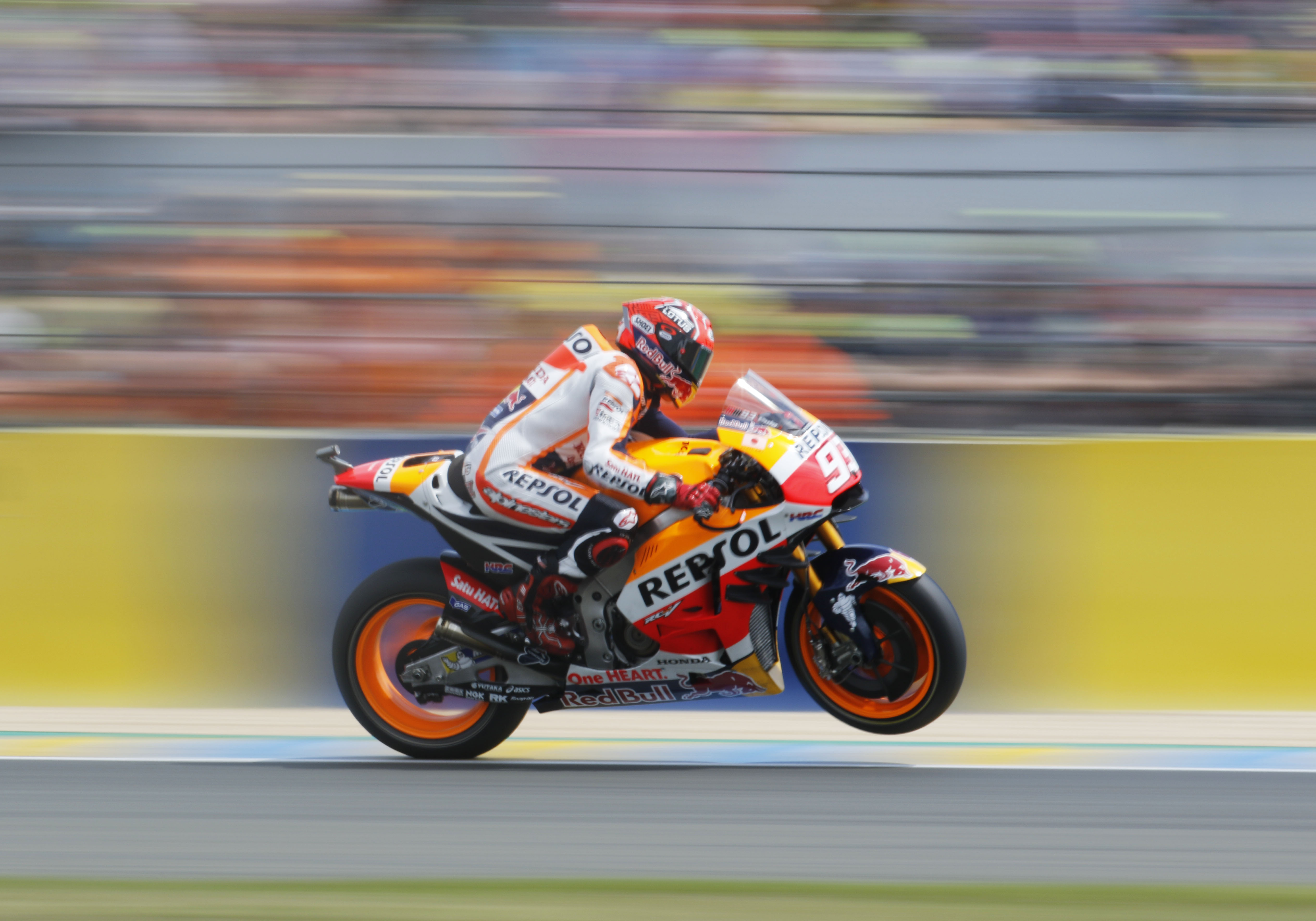 It’s the same with the anti-wheelie, only more so, because while traction control is an important safety device, the same can’t be said of anti-wheelie. Tailor-made factory anti-wheelie systems predicted wheelies before they even happened by measuring the rate of acceleration of the front suspension stroke. The Magneti Marelli kit doesn’t do that; it waits until the forks are fully topped out before getting involved, then shuts the butterflies, which slams the wheel back onto the tarmac. Once again, the rider has to work to get a smoother, faster ride.

And Marquez knows how to do that, because his riding technique is all about getting the maximum out of the motorcycle and then a little more.

This is Czech GP winner Cal Crutchlow, who knows better than most what it’s like to ride an RCV: “Marc is just better than everyone else. He is so special he can ride around anything, so he’s riding around problems like they’re not there.”

HRC has also been working on the RC213V’s engine character, but MotoGP’s engine R&D freeze means there’s very little HRC can do here, so HRC has worked a lot on chassis stiffness to get more acceleration grip.

Marquez knows the championship is now his to lose. He needs to stay out of trouble and keep his eye on the prize, unlike 2014, when he was so far ahead of his rivals that he crashed in two successive races, all because he was distracted.

He fell at Misano while battling for the lead with Rossi because he was desperate to win there, so he could wrap up the title in front of his fans at Aragon. And then he fell again at Aragon, just because he wanted to win the race to please his fans. This year he needs to ignore such irrelevant obsessions. The way he has carried himself so far suggests that he will do just that; especially at Silverstone where he knows all too well how easily things can go awry. 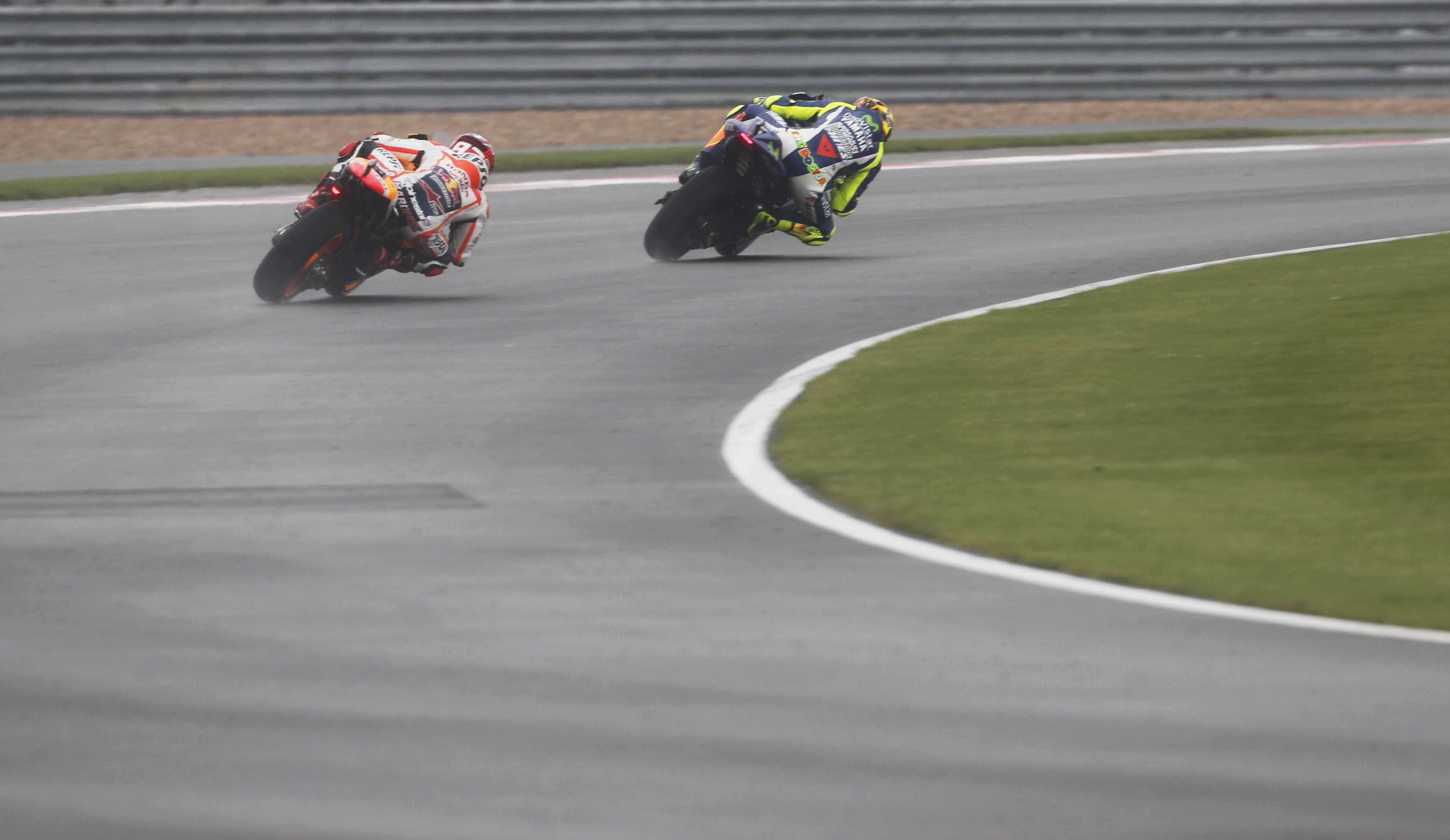 In 2013 he crashed in morning warm-up, dislocating his left shoulder (the same one he dislocated at the Red Bull Ring), and lost the race to Jorge Lorenzo because the injured shoulder was so tired he ran wide in the penultimate corner. Last year he was chasing Rossi when he fell in the horribly treacherous, rain-lashed conditions – trying to win when he should have settled for a safe second or third.

On Sunday he will no doubt use those two incidents to remind him what he needs to do: score some points, that’s all, unless he’s sure he can win it without binning it. Which could be good news for Crutchlow, Rossi and the rest.