Modern sport is a professional business but in fact the whole point of sport is to give people a break from their professional worlds: the workplace, the office, the factory.

A European charter defines sport as such: “Sport means all forms of physical activity, which through casual or organised participation, aim at expressing or improving physical fitness and mental well-being, forming social relationships or obtaining results in competition at all levels”.

To precis: physical fitness, mental well-being, social relationships and results. No mention of corporate etiquette, professional contracts, sponsorship deals, TV coverage or any of the other modern factors that muddy those founding principles.

Viñales has long had a reputation for losing his cool

Sport doesn’t only entertain us through the playing of the game, it also entertains because all of humanity is there for us to see on the stage: the good, the bad and the ugly.

Last weekend Maverick Viñales found himself in deep trouble after his misbehaviour during the previous Styrian Grand Prix. Even some of his fellow MotoGP riders decried the Spanish youngster for his lack of professionalism.

Of course he shouldn’t have done what he did, but MotoGP riders literally live their lives on the edge, and we love them for that, so should we be so quick to judge if they occasionally stumble over that edge?

Viñales may have tried to blow up his YZR-M1 engine in frustration as his troubled relationship with Yamaha went into full meltdown, but modern engines are essentially impossible to destroy because they’re protected by a multitude of electronic failsafes.

Indeed the last M1 engine I remember going pop was Valentino Rossi’s during the 2016 Mugello MotoGP race, due to a mis-programmed rev limiter. 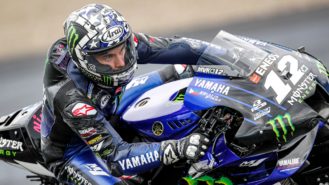 Maverick Viñales will switch to Aprilia from Yamaha for next season

It seems to me he’s been crucified for his actions in a sport in which much, much meaner and nastier things happen every single day. That’s Every. Single. Day.

The 26-year-old has long had a reputation for losing his cool. A decade before engine-gate he was so fed up with his sluggish Moto3 bike that he walked out of the 2012 Malaysian GP, drove to Kuala Lumpur airport and caught a plane home. At Mugello earlier this year he ruined his race by allowing another rider to get inside his head during qualifying.

Apart from a few bruised egos and a few stressed engine parts, what’s the big deal?

And since there’s so much focus on Viñales and his character, perhaps the least we can do is examine his life to see why he might be the way he is.

Viñales comes from a complicated family background and had a troubled childhood. Taking these factors into consideration it’s easy to see why he’s a bit loose. 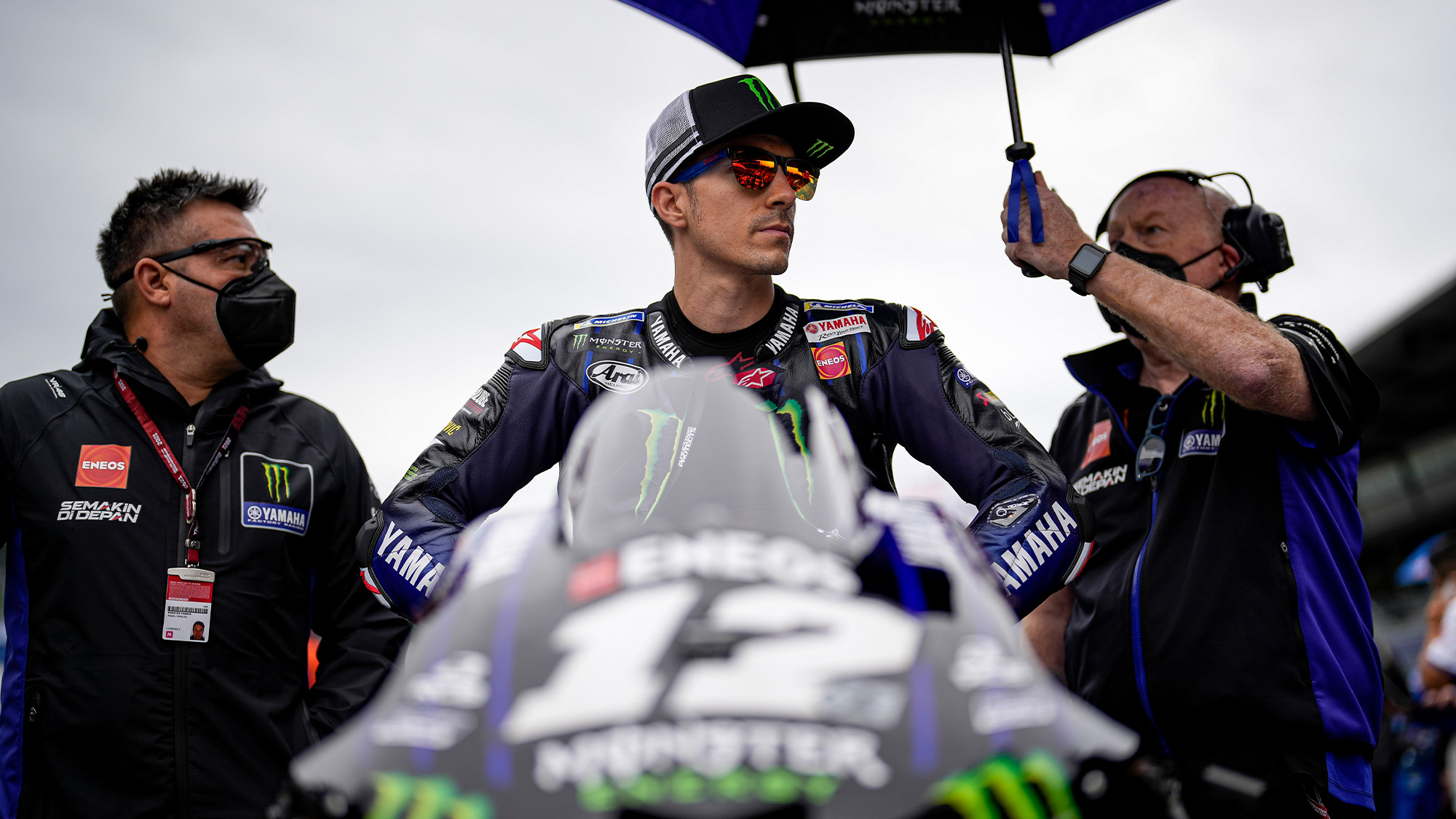 There are other riders in the MotoGP paddock like him – youngsters who didn’t have the upbringing they deserved, who were robbed of their childhoods by ambitious parents who had their futures already mapped out for them.

MotoGP is a very tough world and there are plenty of kids out there who have paid a high price to get where they are. And are they happier than they’d be if they weren’t racing? Many of them, without a doubt. Others, I’m not so sure.

MotoGP meltdowns are nothing new. These are people living under a kind of stress and pressure that none of us can even begin to imagine. Occasionally a rider’s pressure valve will blow.

Viñales certainly isn’t the first to try and blow up a carefully put-together race engine. 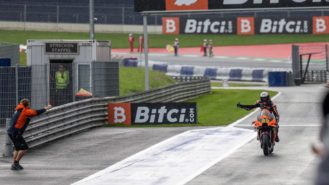 Brad Binder: ‘This wasn’t racing – this was surviving’

Brad Binder rolled the dice when the rain came down at the 2021 Austrian Grand Prix to win his second MotoGP race, but it could so easily have been very different

At the 1992 Suzuka 8 Hours, Suzuki team-mates Kevin Schwantz and Doug Chandler realised their factory GSX-R750 engine was a dog, so what was the point of sweating it out to finish nowhere?

“Doug and I spent the entire first two or three hours we had on the bike trying to blow it up,” recalls Schwantz.

The bike did indeed break, but I recall no grieving apology, with lawyers stood alongside, taking their pound of flesh.

Then there was John Kocinski who destroyed his Suzuki RGV250 engine after fighting a losing battle with the faster Aprilia and Honda 250s during the 1993 Dutch TT. This act did get him the sack.

“All the oil lines blew off, McLaughlin was giving me the thumbs up”

More than a decade earlier, at the 1980 Bol d’Or 24 hours, Honda had teamed a young Freddie Spencer with veteran David Aldana. Only one thing, Spencer realised he couldn’t see in the dark – a bit of a problem in a day and night race

“About one in the morning the Honda team manager Steve McLaughlin says to me ‘Freddie can’t see in the dark, so you better go blow the thing up’,” Aldana recalls. “I tried and I tried. I’d whip in the clutch and hold the thing wide open but it wouldn’t expire.

“Finally it started to slow down and seize up. I came in and the engine was so hot all the oil lines blew off, hot oil going all over the place. McLaughlin was standing at the back of the pit giving me the thumbs up, grinning and going, yeah, yeah, yeah.”

A big fat book could be written about motorcycle racing meltdowns: four-times 500cc world champion Eddie Lawson lobbing traffic cones at trackside marshals after a practice incident at Spa-Francorchamps, Alan Carter punching out a marshal after he crashed out of the 1986 250cc British GP at Silverstone and so on and so on. 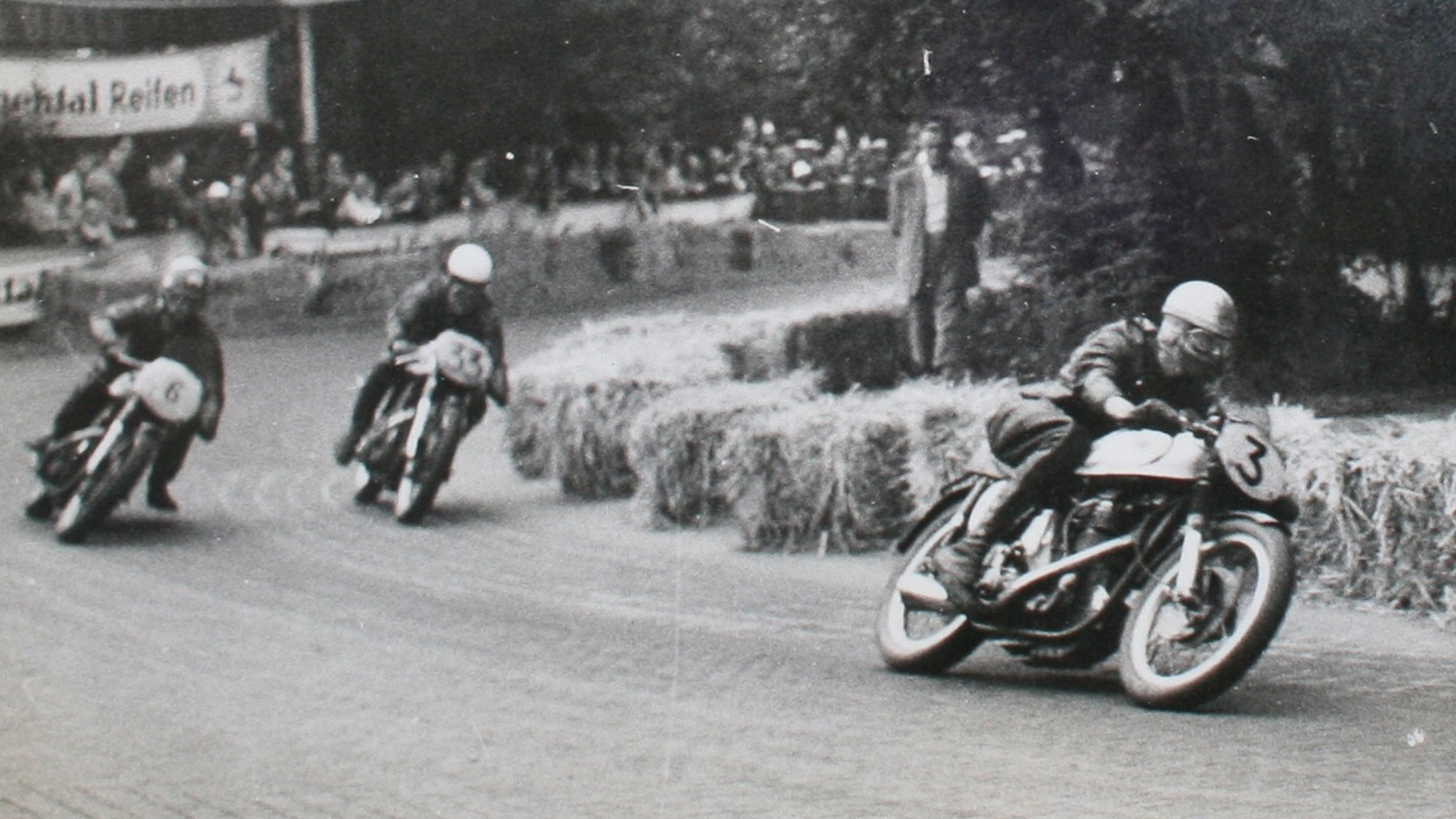 But my favourite MotoGP meltdown stories come from the old days, when people lived freer and looser lives.

Jack Ahearn was a rough, tough Aussie privateer in the 1950s and 1960s Continental Circus – a bunch of ragged, gypsy-living riders who raced their way around Europe, living hand to mouth. The money they earned at one race bought them enough petrol and food to get to the next race, if they were lucky. If not, they stole stuff.

“You had to be a bit of a rat, otherwise you wouldn’t survive,” Ahearn told me some years ago, before his death in 2017.

‘Happy Jack’, as his rivals and travelling companions sarcastically christened him, was the second Australian rider to win a 500cc grand prix, so he was no clown of the circus.

Grand prix results were vital to these riders because their world championship status decided the start-money they’d get from the numerous non-championship events they contested, which paid much better money than GPs.

But the cigar-chomping race promoters were always trying to rip off the riders to further line their pockets.

“Always, if you didn’t watch them, they’d try and dud you,” Ahearn added. “They used to divide us into first-class and second-class riders. I was always classed with the top blokes, but at this Swiss meeting the bloody secretary wouldn’t give me the £100 first-class money, he wanted to give me bloody half that for second class.

“I said, no bloody way! But he wouldn’t pay, so I hung him out of the window. I think we were on the second floor. I was banned from Switzerland after that.”

There is no record of Ahearn being forced to make a grovelling public apology for his meltdown.

Like most privateers of that time, Ahearn raced a Norton Manx, which brings us to the creator of the game-changing Featherbed chassis designed by Irishman Rex McCandless and first used by Norton.

McCandless, well known for his fiery temper, first tried to sell his invention to Triumph motorcycles. He arranged to meet a senior Triumph engineer for dinner, during which he explained the incredible potential of his new chassis.

When the Triumph man realised that McCandless was proposing to sell him “a foreign invention” the told the Irishman “that his company wouldn’t be prepared to enter into a scheme of such a kind”.

This insult was too much for McCandless, who jumped up and upended the dinner table – with all the plates, food, glassware, drinks and cutlery – into the man’s lap.

Then he went off to Norton, who adopted his chassis after star rider Geoff Duke tried the Featherbed and declared that “it set an entirely new standard in road-holding”.

So don’t give meltdown motorcyclists such a hard time. 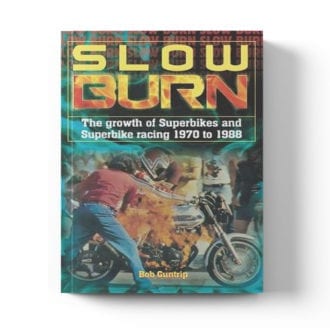