Márquez’s win, Rossi’s Lazarus-style comeback and the performance of Aprilia and KTM made Arágon a special MotoGP weekend 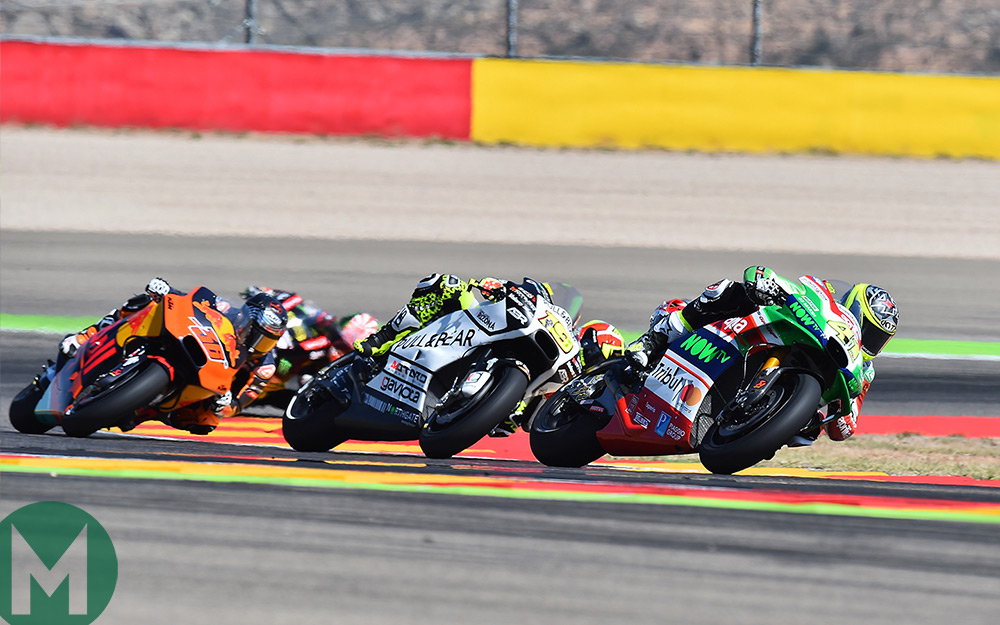 Motorcycle racing is all about winning: at every race you get one winner and 20 or 30 losers.

However, every now and again you look down the finishing order and there are major and minor miracles everywhere. Sunday’s Arágon Grand Prix was like that.

Firstly, to finish first, first you must finish. So congratulations to MotoGP’s king risk-taker Marc Márquez, who won at Arágon to become Honda’s second most successful rider premier-class rider after Mighty Mick Doohan.

Usually Márquez flies around anti-clockwise circuits so fast that he leaves everyone scratching their heads, wondering how he can turn left so quickly. But Sunday wasn’t quite like that. There was only one warm and dry practice session – the 30-minute FP4 – so tyre choice for the race was a roll of a dice.

Márquez nearly fell on numerous occasions during the 23 laps, admitting afterwards that he had “a few scary moments,” which for you and I would be like getting caught in the shower with Jack Nicholson in The Shining. Later, Valentino Rossi admitted that the championship already belongs to Márquez.

Rossi’s weekend was a Lazarus-style comeback of biblical proportions. The Italian isn’t the first rider to hobble onto his motorcycle three weeks after breaking a tibia and fibula. It’s been done many times by riders whose determination blanks out the pain, but none of them has been able to hide the fear of further injury in some dark recess of their brain to the extent that it has zero effect on their ability to ride as fast as they always do

In qualifying, when riders risk 100 per cent at every corner to get near to the front of the grid, Rossi ended up third quickest. Riders up and down pitlane shook their heads in disbelief.

Yamaha engineers reckon that a rider places about 110 kilos through a footpeg when he flicks the bike from side to side at high speed. There are a lot of fast direction changes at Arágon, so how did Rossi manage to force so much load through his broken leg? There is little point speculating, because our range of experience is so far removed from his, that whatever we think of his achievement has no relevance. All we need say is this: the man isn’t normal.

The victory of Márquez and the heroics of Rossi overshadowed two other minor miracles at Arágon.

On Sunday Aleix Espargaro rode his Aprilia RS-GP to sixth place, less than five seconds off the podium and less than seven seconds behind Márquez. This was by far the RS-GP’s best result. Last year the bike’s best finishes came at Arágon and Motegi, where they were 23 seconds off the win. In other words, they’ve come a long way in 12 months, reducing their deficit by 75 per cent. They haven’t improved in one area, but in many areas, winning a hundredth here, a thousandth there.

Espargaro was inexplicably sacked by Suzuki at the end of 2016, much to Aprilia’s delight. “We are very happy about that mistake!” grinned one Aprilia engineer on Sunday evening.

Suzuki’s GSX-RR is a fine-handling machine (not that you’d know it now), but Espargaro believes the Aprilia chassis to be even better

“This is the best frame I have ever ridden,” he says. “It suits my style because I need to feel the front a lot, so I can brake super, super late and carry a lot of corner speed. We have a little less power than the others, so I have to use more corner speed to make up for this. The rear tyre spins, like it does with every bike, but we are one step better than the others on this. There are lots of long corners here at Arágon where you get a lot of spin when you are on the edge of the tyre, but good rear grip is one of the most valuable things we have. We also have good corner-exit traction. For example, out of Turn 15 [the tight left-hander that leads onto the very long back straight] I had better traction than the other guys, so I was able catch the bikes ahead and get a perfect slipstream. We still need to build, but we are getting closer and closer. I’m super happy!”

The factory’s new Ducati-clone aerodynamics also work wonders for Espargaro. “When we tested at Misano I asked to test the bike with last year’s wings,” he adds. “I really liked them, so I pushed the engineers to make some new aerodynamics. I think the aero rule we have now is strange, but if other factories are using this kind of thing, then we must do the same. Aprilia prepared the new aero very quickly and I like it a lot. It doesn’t make a big difference with wheelies, but the best thing is the stability out of the corners, the turning, the stability in fast corners and most of all the braking.”

Aprilia race chief Romano Albesiano is amazed by the advantages conferred by the RS-GP’s new aero. “The very fast corner at the end of the back straight at Misano is a nightmare for riders, because the bike is not stable and it’s shaking,” he says. “The aero makes the bike much more stable through there. Also, it makes the bike much better during braking, because the angle of the aero changes when the bike pitches forward, so this increases downforce.”

The aero Espargaro raced at Arágon was 3D printed at the Noale factory. Now that Albesiano knows it’s the way forward his people are making lighter and cheaper carbon-fibre bodywork for the next races.

“Overall the bike is now really good,” adds Albesiano. “We are really close, but we know we still have some weak points that we must improve. We are very good in braking and entering corners with the brakes, but we suffer more in longer corners where the front isn’t loaded by the brakes. So the neutral phase – brake off, no gas – is the most difficult thing for us. Engine-wise we have made some big steps, but we can always improve. The biggest surprise with the new aero is that is makes zero difference to top speed.”

KTM’s Pol Espargaro may have finished 14 seconds behind Márquez on Sunday, but this was the rookie Austrian factory’s best result so far, bettering Mika Kallio’s 19-second disadvantage at Red Bull Ring. However, that improvement wasn’t the main reason for their celebrations on Sunday night.

KTM introduced a revised chassis at Arágon, which has opened up a whole new direction of development. KTM won’t go into details, but they have redesigned the rear of the chassis so that the suspension and the frame deliver load to each other in different ways. KTM believes that Arágon was a first significant step and that there’s much more room for improvement with this design.

“We made a good step with the new parts at Aragon,” says Pol Espargaro, who finished 10th, one place ahead of test-rider Mika Kallio. “The new design gives more grip when you are turning, and when you can turn earlier you can pick up the bike earlier, so you can find traction earlier, so you can accelerate earlier, so you have more acceleration and more speed at the end of straight. It’s a big thing.”

KTM had only evaluated the new parts once, during a one-day test at Misano, so it took a risk taking them to Arágon. However, racing is all about risk and fortune usually favours the brave. “The bike seems lighter to handle,” adds Kallio. “You can change direction faster, so you can choose better lines and when you open the throttle the bike holds its line better, so it’s a big step.”

A couple of caveats here. Sunday’s race wasn’t fast; it was nine seconds slower than last year’s Arágon race, mostly because teams didn’t have enough time to fine-tune set-up and make informed choices on tyre choice. But that was the same for everyone. Also, Arágon suits the Aprilia.

Despite all this, it may have been the most important race of 2017, because it suggests that Aprilia and KTM are getting closer to breaking the Ducati/Honda/Yamaha hegemony that has dominated MotoGP for so long. The recent introduction of Michelin tyres has helped, but most of all the same-for-all Magneti Marelli electronics.

But don’t get too excited just yet. In racing, each tenth of a second you gain on the leaders, the next tenth is always twice as hard to find.