Once you learn the ins and outs of MotoGP 18’s unforgiving but satisfying handling model, what else does the game really offer? 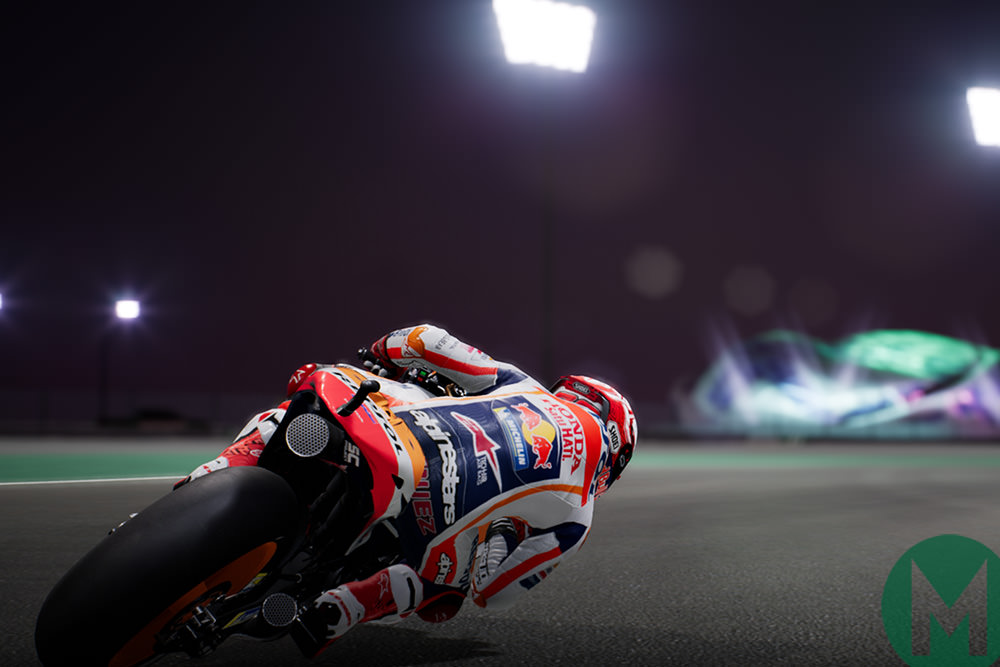 Gamers are in for a rude awakening to the world of motorcycle racing with MotoGP 18. Load the game on either Xbox One, PC or PS4, and you’re thrown into a short tutorial race that does little to help you climb the sheer learning curve of Italian developer Milestone’s latest.

That introductory tutorial is as much hand-holding as you’ll get in this year’s release. You can either replay the tutorial, jump into the career mode, or attempt the trial-and-error approach and hope you get your motorcycle around one of this season’s 19 circuits without throwing your poor rider onto the gravel.

And that approach, unwelcoming as it may be, is actually the most satisfying one to take.

Turn off MotoGP 18’s various assists, all of which are standard fare for any racing simulation, and within an hour it’ll click. The twitchiness in your thumbs evolves into a feathered touch and your rider no longer leans with clumsy, dangerous indecision in order to stay on the Tarmac.

It is satisfying to string together a clean lap, especially on circuits with fast, sweeping corners such as the Red Bull Ring and Assen. That’s where MotoGP 18 shines, rewardingly so.

Skip back through the slightly confusing and poorly presented menus and there you’ll find the opportunity to create your own rider with a basic array of options. Want to create a Giacomo Agostini or Freddie Spencer look-a-like? You’re out of luck, the preset faces are too simple for that. Still, the options to pick a riding style, helmet, boots, gloves, rider number and colour are better than nothing.

Career mode includes the Red Bull Rookies’ Cup, Moto3, Moto2 and MotoGP – an impressive amount of content. The KTMs of the Rookies’ Cup are far more forgiving than their bigger MotoGP cousins, and throughout that first season of the career mode, you’ll have the chance to upgrade your rider’s skills – as you would in a role-playing game.

The later seasons allow you to upgrade your bike with development points, a welcome if slightly arcade-y touch. Still, you won’t be able to turn your midfield KTM into a front-running Honda – each bike has its own limits as far as upgrades are concerned.

If you don’t feel like competing in every practice session and warm-up then MotoGP 18 gives you the chance to skip through or forgo every session, including qualifying if you’re happy to start at the back. But with such an unforgiving learning curve it’s probably wise to use those minutes of practice…

Race presentation doesn’t quite meet the levels of rival Codemasters’ titles, with a slightly dubious voiceover preceding Grands Prix and an awkward depiction of your rider mouthing to their engineer in the paddock. And the superficial details don’t improve out on track.

Yellow smoke rises from almost every grandstand and spectators wave flags in unison, reminiscent of early FIFA games. But that only becomes evident when you’re waiting for the start of the race.

More grating is the fact that the game runs at 30 frames per second, a noticeable drop compared to the 60fps standards set by Project Cars 2, Assetto Corsa and even Forza Motorsport 7. That’s down to MotoGP 18’s migration to the Unreal engine, which gives the game a slightly primitive edge in terms of visual performance.

Lighting and trackside details are also lacking, but the game is impressive in the rain, with reflections, spray, and the moodiest of clouds making MotoGP 18 look the part.

Sounds, on the other hand, are flat, lifeless and canned. The motorcycles seem to plateau on the rev limiter, and the many blips and buzzes of real-life MotoGP action are diluted to a watery monotone in Milestone’s world.

As in many racing titles, the race down to Turn 1 is your best chance to outbrake the slightly sluggish AI and gain positions, but from then on you’ll be punished for every turn you overshoot and every slide.

It’s all too easy to lean on the AI as you corner, however, with little in the way of punishment for making contact – though the game supposedly models damage. Touch wheels with a rider and you might go flying into the gravel – but the physics are modelled almost comically and the ragdoll physics spoil things somewhat.

Once you get the hang of it and begin adjusting traction control and engine braking on the fly, that’s where MotoGP 18 gets into its element. For that alone, committed MotoGP fans will consider this game worth a look, but those looking for an introduction to motorcycle racing simulations may want to give it a miss.

The repetition of slogging through a long career mode to work your way up to the big leagues can grate, and, with such an austere approach to depicting the colourful and captivating world of motorcycle Grand Prix racing, MotoGP 18 misses the mark.

There’s not much in the way of content apart from the four tiers of motorcycle racing, either, and while you may well enjoy the time-trial mode and a few seasons of the career mode, there are no classic ‘bikes or tracks to keep you occupied when that wears off.

Milestone is in a transitional period with its MotoGP series, particularly after its switch to the Unreal engine, but its latest effort to emulate the excellent MotoGP season we’re being treated to falls flat.