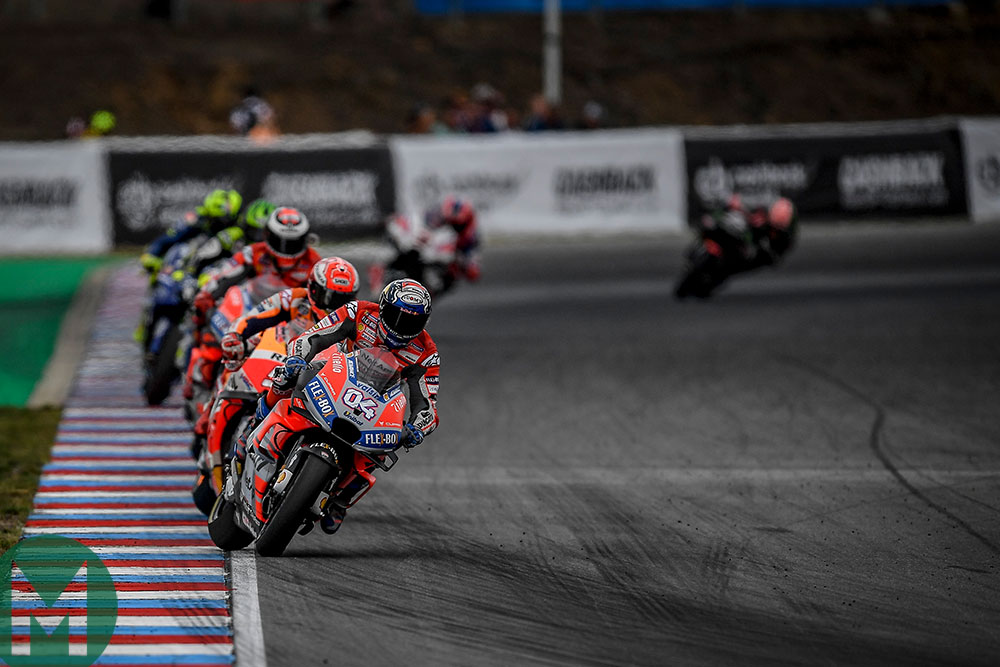 The last two seasons have been all about Ducati and Honda. Those two manufacturers have won all but five of the last 36 races, and the battle for the 2019 MotoGP title will most likely see the duel continue.

Last year the Desmosedici and RC213V were more closely matched than ever, so what are the engineers in Bologna, Italy, and Asaka, Japan, working to improve for their 2019 contest? We spoke to Andrea Dovizioso and Ducati Corse manager Gigi Dall’Igna from Ducati, and Marc Márquez and HRC director Tetsuhiro Kuwata from Honda to find out.

Ducati: working on the fine details

Ducati goes into 2019 hoping it can make a better job of challenging Honda for the MotoGP title than it did last year, when the great promise of 2017 mostly went unfulfilled.

In theory, challenging Honda will be more difficult than ever in 2019, with Márquez and Jorge Lorenzo on Repsol RC213Vs, but Ducati hopes that Dovizioso and new team-mate Danilo Petrucci will make a more united, and therefore stronger, team than its 2018 line-up.

“The idea is that Andrea and Danilo will work more closely together,” says Dall’Igna.

And who knows, Dall’Igna could be right – after all, he’s not stupid. Much will depend on what happens in the Repsol garage, but Dovizioso and Petrucci are already working closely together, by training alongside each other this winter. Whatever happens, the contrasting team dynamics will be interesting to watch.

Dovizioso isn’t sad to have lost Lorenzo as a team-mate – it was no secret that the pair didn’t get on.

“It was very positive to study Jorge’s data, because there’s always something special in the things he does on the bike,” says Dovizioso. “In one way I will miss him, because I will miss seeing his data. In other ways, no!”

Dall’Igna’s main technical focus is the same as it was last season and the season before that: mid-corner turning.

“Again we want to reduce the gap we have compared to the others in the middle of the corner,” says the Ducati boss.

“The gap isn’t big, but they have an advantage in this riding phase. We have some ideas… chassis stiffness, centre of mass and so on.”

Dovizioso tested the GP19 and GP18 back to back during postseason tests at Valencia and Jerez. At Valencia the GP19 felt better mid-corner; at Jerez he wasn’t so sure. That’s no surprise because Ducati doesn’t want to lose its advantages in braking and acceleration, so the differences between the two bikes are tiny.

“The main problem is to reduce our mid-corner problem without creating any problems in the areas where we are really strong,” adds Dall’Igna. “When you are at a good level you have to be sure that you’re going in the right direction when you change something, because otherwise, it’s quite easy to lose your way.”

Dovizioso won six races in 2017 and only four in 2018 due to a tiny difference of another kind: Michelin went softer with its race tyres and that caught him out.

“We took a lot of races to find a good base setting because Michelin changed the rear tyre a little for 2018, enough to create a difference,” says the former 125cc world champion.

“Plus at some races we used the aero fairing but at other races we didn’t, which wasn’t good because we had to keep changing the settings and my riding style. After Barcelona in June we decided to keep the aero and work on getting the set-up right, plus also working on my riding.

“When we started winning again [at Brno in August] everybody thought we had changed something big, but when you are already at a good level it’s impossible to change something big.

Beating Márquez and Lorenzo on pure talent certainly won’t be easy, but Dovizioso and Dall’Igna have a special way of working that may give them an advantage. And the fact that the Desmosedici goes through the middle of the corners slower can also be a positive, because the bike uses the edge of the tyres less. And tyre life is everything. But of course it’s not that simple…

Once again, it’s all about riders and engineers working more closely than they’ve ever worked before to get the best out of the bike and tyres.

While Dall’Igna works on the details he also thinks outside the box, which explains the parallelogram rear end that Dovizioso, Petrucci and Pramac GP19 rider Jack Miller tried at Jerez last month. This gizmo squats the rear end during braking to increase rear grip, which could give Ducati a major advantage in 2019.

Riders already exceed 100 per cent of front braking grip – locking the front tyre into most corners – so if Dovizioso can use the rear brake and rear tyre to increase stopping power he should be able to out-brake anyone. But if Ducati’s so-called FUBAR works, expect Honda, Yamaha and everyone else to fit their own very soon. 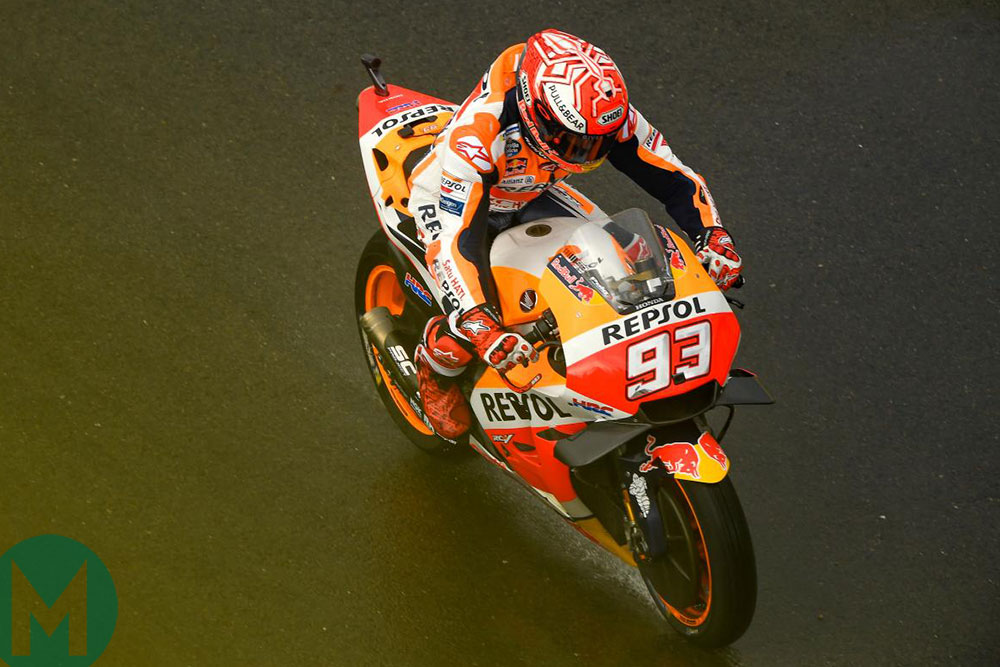 Marc Márquez has won the past three MotoGP world titles, but at some cost to himself: 57 crashes during race weekends and plenty more in testing. He ended last season undergoing major surgery on his wonky left shoulder, which he had dislocated numerous times.

This is why one of Honda’s main focus points for the 2019 season is the front end of its RC213V. Márquez’s riding technique and the RC213V’s architecture put huge forces into the front tyre, which is why he nearly always has to race with the hard-option slick.

“We are still analysing why we work the front tyre so much,” says Márquez. “With the hard tyre maybe you can go faster, but you get less warning, because the tyre is stiffer. If you can use a softer tyre then you can feel the limit better.”

However, like Ducati, Honda needs to be careful. Thus the 2019 RC213V won’t be radically different, featuring minor changes to geometry, tweaked frame stiffness and different Öhlins fork internals. The difference in the way the new bike uses the front tyre isn’t night and day but it’s already a step in the right direction.

“The new chassis is very, very similar – we are closer now and the front isn’t so critical now,” says Márquez, who spent a lot of time during the Valencia and Jerez tests with medium-option front slicks.

Honda’s other big focus is still the engine; even though the engine was its biggest improvement last season. For example, at Aragón, where bikes accelerate from first gear to a tall sixth gear, Honda’s top-speed deficit against the Ducati shrank from 2.5mph in 2017 to 0.7mph in 2018.

“Ducati’s engine performance was still higher than ours, so we need more acceleration for 2019,” affirms HRC director Tetsuhiro Kuwata.

Last season was only Honda’s second with its current engine configuration – big bang with reverse crankshaft rotation – so no doubt there are more to come from improvements to the internals, fuelling, mapping and so on. And Márquez’s first rides on the 2019 bike in Spain convinced him that he will have better straight-line performance next season.

“The biggest difference in the new bike is the engine,” he says. “It’s a new evolution and it’s an improvement. But we need to work and understand it, because we need to adapt the electronics to the engine character.”

Honda’s other big change last season was its carbon-fibre swingarm, which Márquez used in all nine of his winning rides. At the same time Ducati used an aluminium/carbon-fibre composite frame, which allowed engineers to adjust flex in a vital area, without the need for a whole new frame, simply by replacing one bonded carbon-fibre insert with another.

Don’t be surprised if Honda follows suit, one way or another. “Maybe in the future we will go another way with carbon-fibre,” adds Kuwata.

Of course, Kuwata will have other things on his mind in 2019, when he will have arguably MotoGP’s strongest-ever line-up in his garage.

“We have two world champions, which will be very challenging for us, but Honda likes a challenge,” he says.

“For me, it’s very interesting technically, because we have to give both riders bikes that work for them. Marc and Jorge will have different requirements, which is good experience for us and will help us with future development.

Of course it means more pressure for us, but I believe this situation will be good for us and good for both riders because they will improve themselves.”