Petrucci has yet to win a MotoGP race, but Ducati’s latest factory rider is super-fast and few are better at describing what they do on a bike 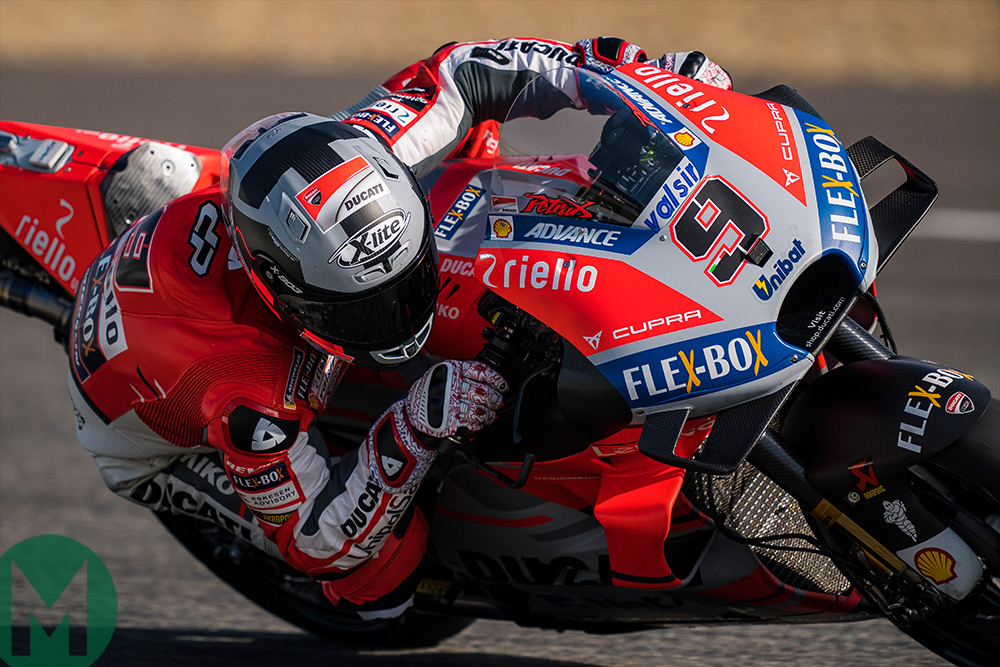 You’ve been through some big technical changes in MotoGP: starting out on a CRT bike with a streetbike engine, then changing bikes, tyres and electronics

In reality, I had a Superstock bike during my first three years in MotoGP! So I only really started racing in MotoGP when I joined Pramac Ducati in 2015 and got my first real MotoGP bike.

For sure you remember the long slides we had with the Bridgestones. With those tyres you simply picked up the bike in the middle of the corner and let the bike slide out of the corner, no problem. With the Michelins the situation is different. The tyres are very good, but because they are different and because the electronics aren’t so good, you have to manage the tyres very, very well and you have to be very careful.

For example, from one corner to another it’s sometimes better not to fully open the throttle and try to manage the slide. That’s one of the things Andrea Dovizioso learned in 2017 and I think he is the best at managing slides out of corners. He tries to let the bike slide as little as possible, so towards the end of the race he has more tyre than the others. For me this was one of most difficult things to learn, because I really enjoy sliding the bike!

If you follow your instinct you always try to open the throttle as fast as possible out of the corner and I think I’m one of the best at doing this. I brake really hard and I open the throttle very early. This was good with the Bridgestones and the factory electronics but not so much now. Yes, you can open the throttle, but you have to be very, very smooth; a bit like it was with the 500 two-strokes.

Last winter I worked a lot on this and I learned a lot from looking at the data of Ducati’s fastest riders: Andrea and Jorge [Lorenzo]. Your data guys show you a lap from your last run and you look at how Andrea and Jorge rode the same lap with the same tyres in the same condition. Then you make comparisons: okay, I used full throttle before them, but I had a bigger slide and my exit speed was less.

It’s not so much about wheelspin as it is about sliding. If you let the bike slide very early in the exit phase you won’t be able to regain traction, even if you pick up the bike and don’t use full throttle. This is very difficult, especially when you are in a time attack in qualifying or during the race, so you have to think a lot. Now it’s more difficult to be fast all through the race. It’s quite easy to be fast for a few laps, but after 10 laps you have no tyre left. You have to save your tyres as much as possible during the race, but this isn’t easy because you also have to be as fast as possible.

You enjoy sliding the bike, but do you also enjoy riding when you have to think more and be more precise?

When you watch Marc you always say: ‘okay, I have to do more!’

Yes, it’s more challenging. The tyres are like this and the electronics are like this, so the best rider is the guy who adapts himself best to the bike, to the tyres, to the conditions, to everything.

What about the change of front tyre, from Bridgestone to Michelin?

The Bridgestone front was strange because the harder you braked into a corner with a lot lean angle the better the bike turned. But even though you knew this, it wasn’t easy to reach the limit of the tyre. When we first tried the Michelin front we were scared, but now we are very, very fast and we’ve broken a lot of lap records, so you cannot say one tyre is better and the other tyre is worse; they’re just different.

The limit is very close. With the Michelins you simply have to stop the bike when it’s upright and when you start to lean into the corner you have to release the brake as early as possible, because you can carry a lot of speed through the corner, but not with any brake. Sometimes it’s a lot of fun carrying all that speed. The most challenging thing is carrying a lot of speed through the corner and then opening the throttle as late as possible to save the rear tyre, so you have to mix the entry and the exit of the corner. It’s very, very difficult and it’s very challenging. It’s more difficult than before but this is good because it means fewer people can do it! You just need a good target and, for me, Dovizioso is the target because 80 per cent of the time he is faster than me, so I try always to understand how he does things. I think a lot about it, but now my riding style with the Michelins is natural. I’ve forgotten about the Bridgestones!

With the Bridgestones the cornering technique was very in-and-out, but now you have the mix those phases…

When I arrived at Pramac I started looking at Dovizioso’s data and if you check our data now it’s very, very similar. We are both very good brakers – we brake very, very hard, but he is better than me at managing the tyres. Sometimes I get myself in trouble, maybe because I don’t have as much experience as him. He recognises problems sooner than me and can solve those problems, simply by adapting his style to the situation.

Do you analyse videos to compare your body position on the bike; how much you hang off and so on?

I am one of the taller riders and I lean off a lot, so I lean the bike less than the others. But we cannot understand if this is better or not for tyre consumption. We see a difference of four or five degrees between me and Dovizioso, who doesn’t always scrape his elbows like Márquez. I always touch my elbows in left-handers but not so much in right-handers because I always lean about two degrees less in the right hand-handers. I don’t know why, but I prefer lefts.

I try to lean off the bike more because I see other riders doing this, but the best time to lean right off the bike is inside the corner. On the exit it’s better to pick up the bike as early as possible, but to do this you must first turn the bike, because when you are leaning a long way out of the bike you cannot go with the throttle.

Who has the perfect style for now?

Márquez! Dovizioso is very good to watch and to learn from, but I think Marc always has something more. I don’t know how he does it; he’s always trying to find the limit. This is scary for us, but he’s not scared of anything!

What can you learn from watching Márquez?

When you watch Marc you always say, okay, I have to do more! I’ve never seen his data because I’ve never ridden for Honda, but when you are following him he always seems to be over his possibilities, over his limit. When another rider loses the front in a corner he says, okay, this isn’t the right way, so he comes into the pits. Marc loses the front twice and continues likes it’s normal; I think that’s the difference. For sure he is the best rider in MotoGP at the moment because the numbers say so. The biggest difference between Marc and us is that he’s got no fear.

How has the change in tyres and electronics changed the way you fight with the other riders?

One of the problems now is that when you are trying to pass someone on the brakes you cannot hold your line when you release the front brake, so you go a bit wide and the other rider comes past on the inside. We’ve seen that a lot with Dovizioso and Márquez, but it happens with all of us.

So you have to stay very close to the other rider and block him on braking. So you brake, brake, brake on the inside and stay side by side with him, so you don’t pass him completely. You are almost completely stopped, then at the right moment you enter the corner and the other rider is blocked, so he can’t come back at you on the inside. I think this is the best way to pass, because it’s very difficult to overtake in MotoGP now.

It’s also very difficult now because the aerodynamics of the bikes are so good that when you are right behind another rider on a straight you don’t gain so much in the draft. To have a chance of overtaking you have to be very good in acceleration. You have to prepare your attack from two or three corners before, so you go into the corners a bit slower and open the throttle as soon as possible. But the problem is that this can make you slide and spin more.

So you pass the guy in front, but then you run out of tyre and he comes past again?

Petrucci is now the biggest rider in MotoGP. He knows this is a problem because he can’t help but put more load into the tyres, which affects tyre life. Last winter he dieted heavily to shed weight, but went into the season too weak to ride at his maximum. This winter he will follow a better nutrition regime and train with new team-mate Dovizioso. The idea is to enter 2019 lighter and stronger, because he knows he’s only got one shot at securing his future as a Ducati factory rider – his contract is one-year only.