The final set of reports from the Catalan MotoGP Grand Prix: a brief glimmer of excitement in Rossi’s garage, Pedrosa starts work at KTM, MotoGP’s 70th birthday and the FIM honours its greatest president 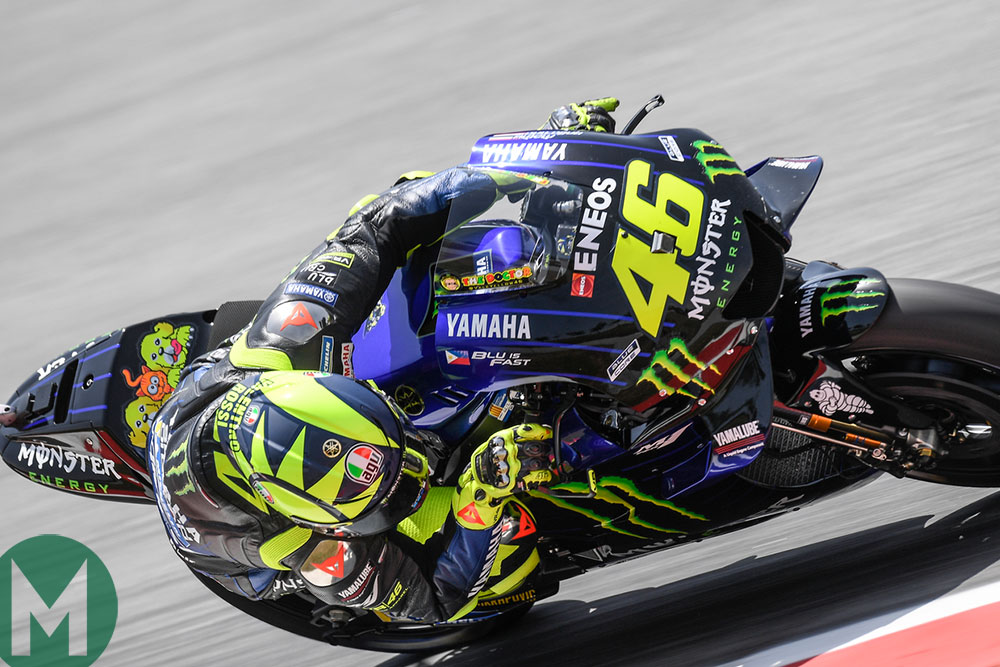 Wandering up and down pit lane there’s always loads going on and plenty of things to photograph.

Some factory mechanics don’t like you taking photos of their bikes. This year I’ve had one mechanic shoo me away like a dog, because some factory bosses believe that rival factories are paying photographers to take multiple photos of their bikes from every angle, so they can use imaging software to create a complete 3D map of each motorcycle. Pitlane espionage is still alive and well.

And I’ve been deterred from taking photos by another mechanic standing in front of his bike, miming the action of unzipping his flies.

Since the start of the season we’ve seen KTM’s carbon-fibre swingarm, various weird aerodynamics gizmos on Ducati’s GP19s, a carbon-fibre/aluminium frame on Stefan Bradl’s HRC test bike, the fuel-tank cover appendages on Jorge Lorenzo’s RC213V, new aero in the Aprilia garage and much more. But there’s been nothing new on Yamaha’s YZR-M1, at least until Friday morning at Barcelona, where excited pit-lane types spotted a revised exhaust system on Valentino Rossi’s YZR-M1.

Was this the breakthrough technology that Yamaha needed to turn its season around?

“It’s not so bad, but I don’t feel a lot of difference, so we will use the standard exhaust for the rest of the weekend,” said Rossi on Friday afternoon.

The new exhaust was the latest from Akrapovič, which equips most of the grid. When the Slovenian company develops a new exhaust system for Yamaha its engineers take delivery of a YZR-M1 and/or engine, so they can test their work on engine dynos and rolling-road dynos.

It’s very difficult to improve peak horsepower without sacrificing performance elsewhere, so most likely Yamaha is hoping to improve throttle response, which should help improve corner-exit speed and tyre life, two big problems that have haunted Yamaha riders for years.

Of much greater importance at Barcelona-Catalunya were rumours of a heavily revised YZR-M1 being prepared for the post-Czech GP tests in August. Since the MotoGP technical regulations changed in 2016 Yamaha has consistently failed to build a bike that works with spec electronics and Michelin tyres.

What will the new bike be like? It could be one of two things. Suzuki’s GSX-RR inline four doesn’t suffer from the same issues as the Yamaha, so the new M1 could be an improved version of company’s traditional corner-speed bike, which burns the edge of its tyres less than the current machine.

Or the 2020 M1 might take Yamaha in a whole new direction, sacrificing some of the bike’s excellent corner speed for some of the stop-and-go performance that has made Honda’s RC213V and Ducati’s Desmosedici the dominant forces in recent seasons. 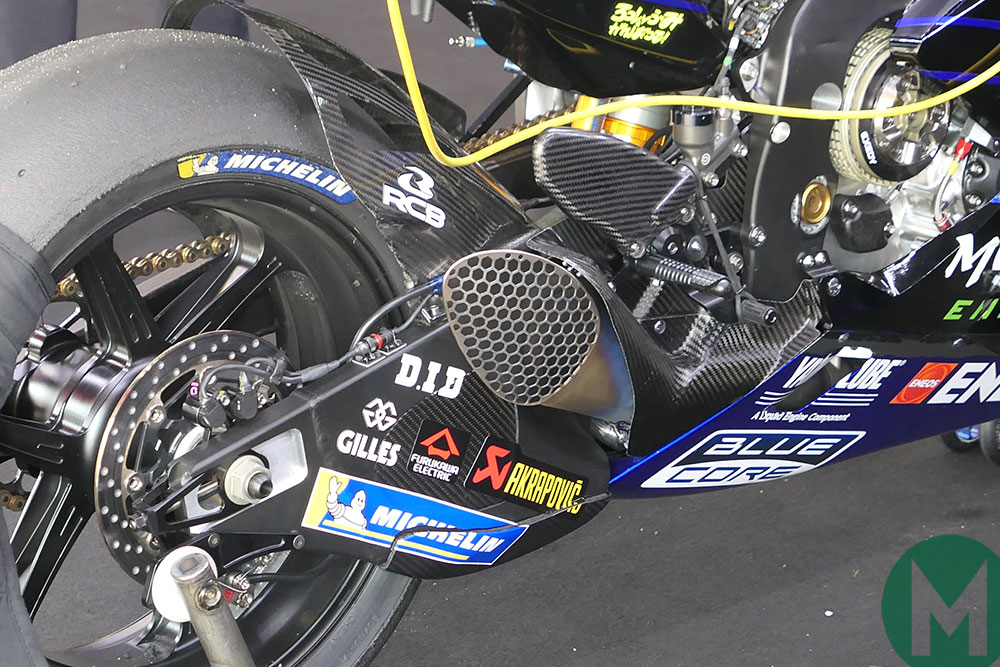 Zarco: ‘Dani’s comments are the same as mine’

Former factory Honda rider Dani Pedrosa had his first serious outing as a KTM test rider at Brno a few days after the Italian GP. The Spaniard, who retired from MotoGP at the end of last season, had undergone radical treatment to fix a collarbone injury and was able to ride more than 100 laps in two days. He also took part in the post-Catalan GP tests.

“Dani is of unbelievable value to us because his feedback is so super-precise,” said KTM race boss Pit Beirer. “In two or three sentences he makes a point and the engineers understand what to do.”

KTM left Barcelona-Catalunya in a good mood. Pol Espargaró raced the revised big-bang engine he first used at Mugello to finish 16 seconds behind the winner, 20 seconds better than his 2018 race. And Johann Zarco finished closer to the winner than he’d managed since Qatar, which always creates close-packed finishes.

“The carbon-fibre swingarm brings some more grip,” said Zarco, who raced the item for the first time, a month after Espargaró gave the swingarm its debut it at the French GP. “Instead of spinning the tyre and staying in the same place, you spin the tyre but you go. That’s the difference. But it doesn’t fix everything.”

Zarco was also impressed by Pedrosa’s input. “Dani gives similar comments about the bike as me. That’s positive, because he’s never ridden a Yamaha and he’s giving the same comments as me, which means that I’m not trying to make a Yamaha, I just want to make a fast bike.” 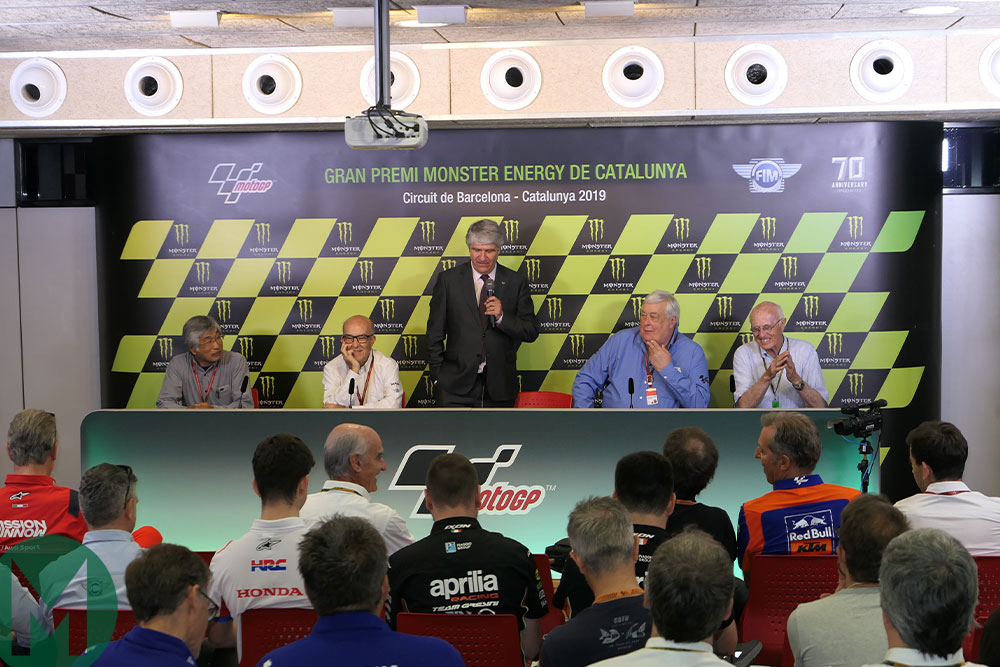 The Catalan GP marked the 70th anniversary of motorcycle world championship racing, so there were various events to make the occasion. On Thursday evening the entire MotoGP grid got dressed up in tuxedos and bow ties for a photoshoot, most of them managing to look more like silver-service waiters than Grand Prix stars!

Brenni was FIM president in the early 1980s when the sport was going through massive ructions, with Trimby leading the riders’ fight to improve track safety, paddock conditions and remuneration. Many paddock people rate Brenni as the best-ever FIM president.

“Luigi was the first FIM president who would talk to us – he changed everything,” said Trimby, who started working with GP riders in 1982, fighting with the FIM and promoters, and then helped establish IRTA in 1986.

The Catalan GP was the 930th world championship event since the 1949 TT. A big number, but perhaps not quite as remarkable as Valentino Rossi’s record. The nine-time world champion has contested more than a third of those events. Sunday’s race was his 330th across all three classes!