MotoGP Mutterings: 2019 Italian Grand Prix, part 2: Why was the Italian Grand Prix so close? Plus, how teams are getting the most out of standardised electronics and that unforgettable first-lap battle at Mugello 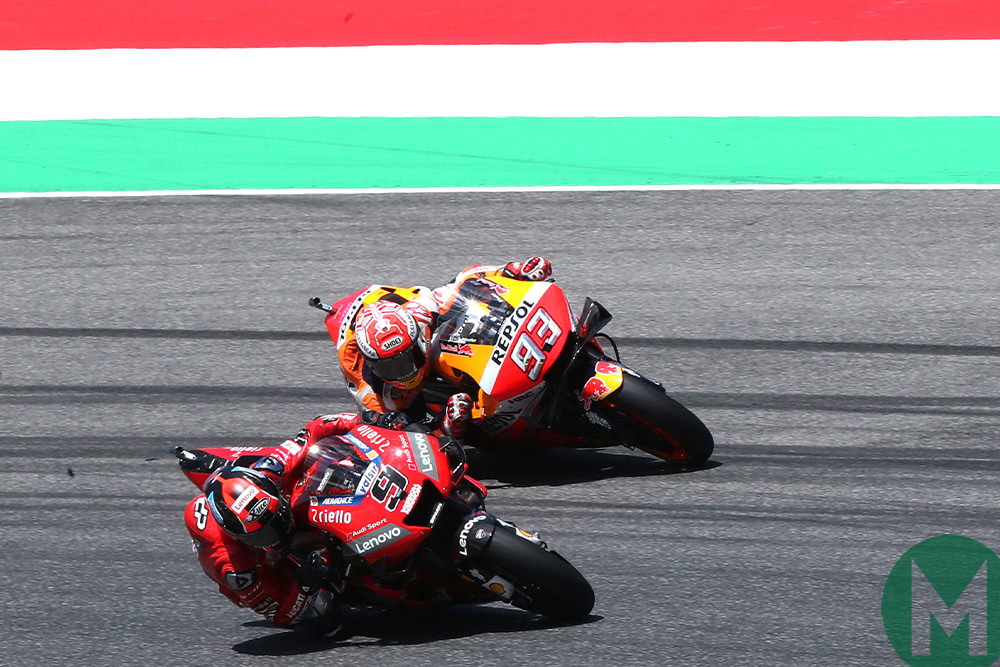 Two MotoGP records were broken last weekend: on Friday Andrea Dovizioso became the fastest motorcycle racer in history when he swept down Mugello’s start/finish at 221.6mph/356.7kmh, bettering his own 2018 record by 0.12mph/0.2kmh.

More significant was the spread of fastest race lap times. For the first time in grand prix history less than one second separated the fastest rider from the slowest. Jack Miller rode the best lap, at 1min 47.657sec, shortly before he crashed out. And Karel Abraham rode the slowest personal best at 1min 48.604sec, just 0.947sec slower than Miller.

This is an astonishing statistic, which follows a general trend: the closest-ever top 10 at Brno last year (8.3sec) and the closest top 15 at Assen last year (16sec). These contrast dramatically with the lap-time spread from the years before Dorna started tweaking the regulations to equalise machine performance to create closer racing and attract more fans.

In the last dry 500cc GP at Mugello the spread of fastest laps was 5.5sec, between a four-cylinder Honda NSR500 and a twin-cylinder NSR500V. In 2012 the spread was 4.7sec, between an RC213V to an Avintia CRT bike, powered by a Kawasaki ZX-10R street engine.

There is no longer such a technical chasm between the front and back of the grid, because Dorna requires factories to lease factory-spec bikes to the independent teams, at a cost subsidised by Dorna. The technical rules also play a part: the 81mm bore limit, unified software and Michelin tyres.

The Michelins are easier to take to the limit than the stiffer Bridgestones, which required riders to develop some radical tricks, like using the front brake all the way through corners to keep the front tyre squished for a bigger contact patch.

Although each rider’s fastest lap was closer than ever, Mugello didn’t produce the closest top 10 or top 15, partly because it’s such a physically demanding track. Wrestling a 160kg MotoGP bike through Mugello’s numerous direction changes takes a huge physical toll on riders, so most of them struggle to maintain their best pace.

MotoGP winner’s gap over the decades

Analysing the corner we won’t forget for years 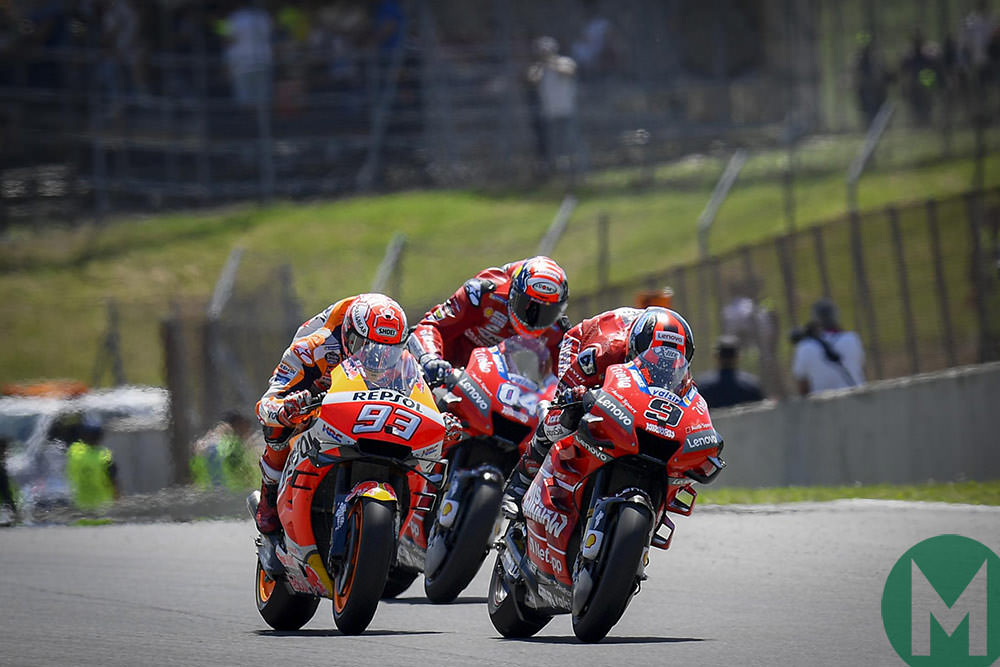 That three-abreast moment at the first corner of the last lap was something very, very special. The man who made it into San Donato in first place was Marc Márquez, who had got a huge double draft from the Ducatis of Danilo Petrucci and Andrea Dovizioso. But gaining so much speed can cost you.

“It was great [to] take both Ducatis on the straight,” said Márquez. “On other laps I was struggling to work out if it was better to overtake on the left side or the right side. Then I understood the right side of the track was too dirty, so the bike started shaking, so I went to the left side.

“But with the slipstream I arrived at the [braking] point with very high speed and I missed the apex. I already saw I was going wide, wide, wide, so I tried to go tighter, then I saw a red bike on the inside. I didn’t know if it was [Andrea] Dovi or Danilo. Then I saw the bike pick up, so I picked up. When we went into the next corner I saw I was second and Petrucci was first, so I said, okay, we are in a good situation.”

Petrucci came off worst in the slipstreaming battle, with Dovizioso coming past, then Márquez, after Petrucci had led the previous 11 laps.

“They braked really hard [for the first corner] and I braked a little earlier, so I was very tight to the kerb,” said the race winner. “There was just one metre of space on the inside and I put my bike there. Andrea was closing the corner, but I was there. I’m so sorry for that pass! Andrea was the last person in the world I wanted to make pick up his bike, but today I had a good chance to win.”

More: ‘I said to myself: I must quit racing!’

Petrucci’s lunge forced Dovizioso and then Márquez to pick up, but because Dovizioso was sandwiched in the middle he had to back out of it the most.

“Marc braked very late and he is able to manage the slide in the last part of the braking,” Dovizioso explained. “But I feel quite strong in braking and I got inside him, so I managed that. We went a bit wide and that allowed Danilo to enter. I didn’t feel there was much space there, so I tried to close the door as fast as I could, but Danilo arrived at that moment, so I had to pick up my bike very quickly to not touch him, but at the same moment Márquez was there, so when I picked up my bike I had to be careful to keep some lean angle because if I’d hit Marc I could’ve crashed.”

At that point Márquez was also wary of making any mistake that might cost him vital championship points.

“When I saw Danilo was first and Dovi was third I decided I must not try [to attack Petrucci] because we might both go wide and then Dovi would win the race, which would be worse for the championship,” he said.

Mugello doesn’t work well for Márquez and neither does it work so well for Honda’s RC213V. (Or its RC212V predecessor – Honda has won just two races in 13 visits to Mugello with its V4 MotoGP bikes.)

On Sunday Márquez was in the victory battle for two main reasons: the 2019 RC213V is pretty much as fast as Ducati’s GP19 and Márquez changed his riding technique to suit the track. It was noticeable that he was faster through the second part of the five direction changes that dominate Mugello (turns two to three, four to five, Casanova to Savelli, Scarperia to Palagio and the super-quick Biondetti) because he had learned to sacrifice the first part of each esses section.

“I’m a rider who goes into corners very, very fast, and here you can go too fast into the first corner and then you pay for that in the second part,” he explained. “At Mugello I can’t use the extra I normally I have in the last part of corner entry; I could only use it here at turns 12 and 15.”

Sunday’s Mugello MotoGP race was an all-time great: four different riders and three different factories fighting for the win at one of the fastest tracks; thanks in part to Dorna banning tailormade rider-control electronics.

The 2016 introduction of unified software made the racing better and made life more difficult (and more fun!) for the riders. No longer does a little black box do everything for them; they have to help control slides and wheelspin themselves.

This year Dorna completed the hardware and software puzzle with the introduction of a unified IMU (inertial measurement unit). Now the game is for the factories to get the best out of the unified hardware and software however they can, without actually cheating. No doubt, the world’s cleverest motorcycle electronics experts are already doing some very clever things to find an nth of an advantage.

How about using the IMU’s pitch axis – which measures fore-and-aft movement during acceleration to detect wheelies – to detect slides?

Although Dorna’s unified software features a traction-control channel, which teams use to control wheelspin, it doesn’t include a slide channel, which most factories did have during the days of tailormade factory software. Nowadays it is up to the rider to control slides, but if his electronics staff can find a way to help him in this vital area they will allow him to open the throttle sooner, for more acceleration and top speed.

Aleix Espargaró and his Aprilia engineers believe they are struggling largely because some of their rivals have found a way of incorporating some kind of anti-slide system through clever use of the IMU and sensors. And could this also be why Yamaha is struggling so badly?

“I don’t have a spin problem, I have a lot of sideslip immediately when I touch the throttle,” said Espargaró at Mugello. “There’s no slide channel in the software, so we can’t control the sideslip, but when I follow other bikes they spin more than us in the pick-up area, but not at all at 55 degrees of lean. It’s difficult for me to understand how they can find this initial traction, so I have my doubts that they are not controlling it.”

Aprilia’s chief engineer Romano Albesiano believes this is a case of know-how, not skulduggery.

“I don’t think anyone is cheating,” he says. “When a car slides it’s basically a yawing movement, but when a motorcycle slides it’s more of a pitching movement, so maybe you can use the pitch axis of the IMU to detect the early signs of a slide. It’s part of the strategy we are now considering…

“In this area you cannot rely on the traction control, because the spin value is very low. The bike is sliding, not spinning, so you cannot take the spin signal to detect the slide, or at least it’s very difficult.

“This is always the challenge: okay, in this corner the rear tyre can accept this amount of torque, no more and no less. So you have to find a clever way to design the torque delivery map.”

Espargaró’s patience was running out in Italy, where he qualified 15th and finished 11th. “I’m really disappointed – I feel like I’m riding in 2017,” he said. “I have the same feelings and the same problems I had during preseason and at the first races. I cannot touch the throttle early because it feels like I’ll have a highside – I’ve already had three this year.”

Albesiano is convinced the RS-GP’s problems is electronics, not chassis balance or power delivery.