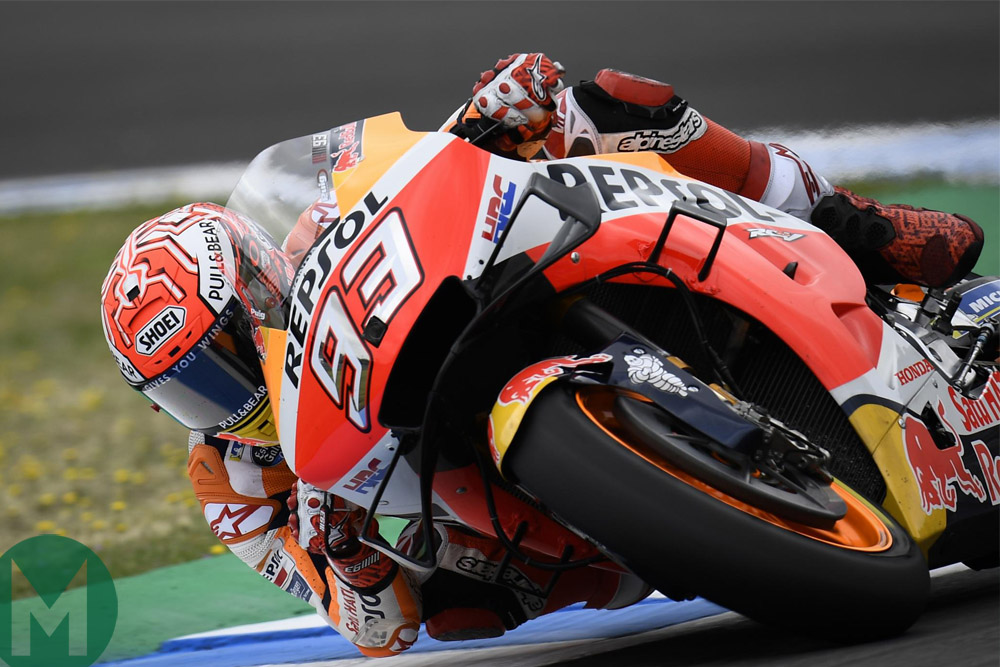 What is Honda up to?

But what’s up with the issues it’s been having at the last few races: chains coming off the sprockets, and bikes cutting out? This is all very un-Honda.

There are various rumours circulating the paddock, but so far nothing anywhere near certain. Some paddock people initially blamed the chain/sprocket issues on lateral swingarm flex, but this seems unlikely, because HRC would surely have calculated these figures and if this was the problem it would likely have occurred in preseason testing and the first race.

Another theory suggests that HRC is trying to do something clever with chain force, with the aim of improving rear traction and therefore increasing acceleration. But this is just a theory, nothing more.

What the problems would seem to indicate is that HRC is working on something quite trick, perhaps stung into action by Ducati’s production line of clever bolt-on go-faster bits and pieces. For the moment we can only keep looking…

What is certain is that HRC has made big steps forward with the issue that hampered Márquez at COTA; most likely related to tweaking Dorna’s Magneti Marelli engine-braking software to better suit the 2019 RC213V engine.

“My bike is still not an easy bike – check the other Hondas,”

Building an engine-braking map that creates consistent rear grip while the rider hauls on the brakes and shifts through the gears is more important than ever, because riders need all the braking power they can get from the rear Michelin to support the front Michelin.

At Jerez, Márquez admitted he had been having problems all season, but he was more able to ride around them at Losail and Termas, which are smoother and more sweeping than COTA, which is tight and bumpy.

“I’m very happy because my team and especially the engineers in Japan and the test team improved the bike a lot in this area, especially in corner entry, so I feel better because the engine is more predictable,” he said. “This helps a lot to make me safer on the bike, because otherwise I was making some mistakes I didn’t understand. We had the problem at the first three races; even in Argentina, where I was able to adjust [and where he won by 9.8 seconds], but at Austin I wasn’t able to adjust. Now we are working in a better way.” 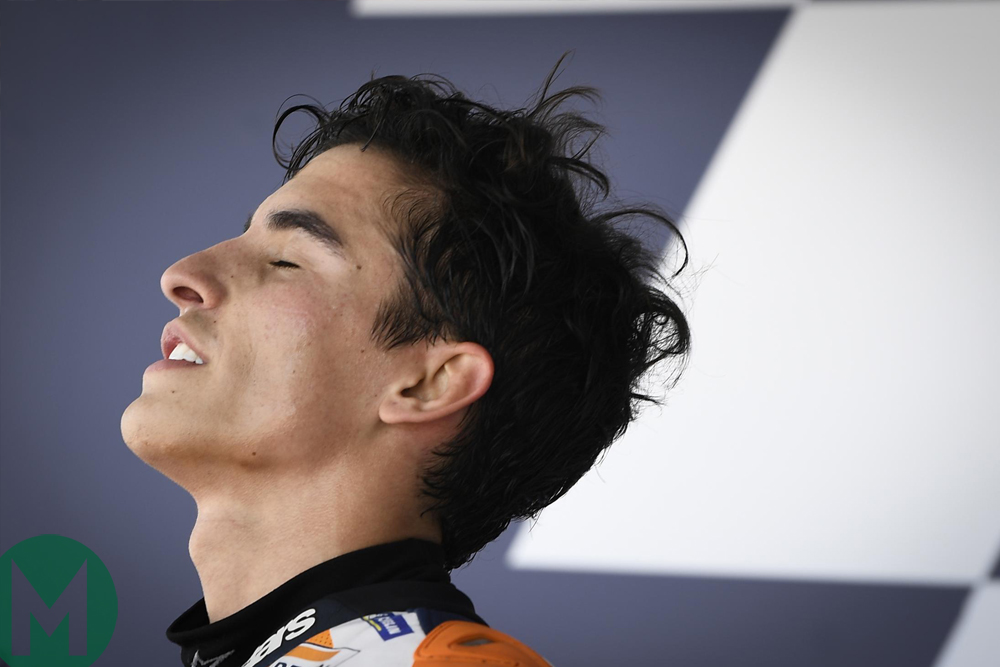 Jerez was another stunning victory from Márquez. Crashing out of the lead at COTA – while under no pressure – put him under a lot of pressure for his home race. First, the pressure to win the race and regain the championship lead. Second, the even greater pressure of making sure he didn’t crash again while chasing the 25 points.

“My bike is still not an easy bike – check the other Hondas,” he said, referring to the next placed RC213V, ridden into eighth place by Cal Crutchlow. “We still need more feedback from the front tyre, but I do think I’ve got the best overall package.”

Márquez looked as comfortably in control as he ever does during the 22 laps; increasing his pace immediately after Fabio Quartararo stopped to keep himself well clear of the hard-charging Álex Rins. But how will the RC213V behave at Le Mans next week? The French track is mostly short, tight corners, some preceded by heavy downhill braking. It will be another test for Márquez and his technicians, especially with France’s new home hero racing at home and at a track that can work well for the Yamaha.

Rins has only one problem to fix 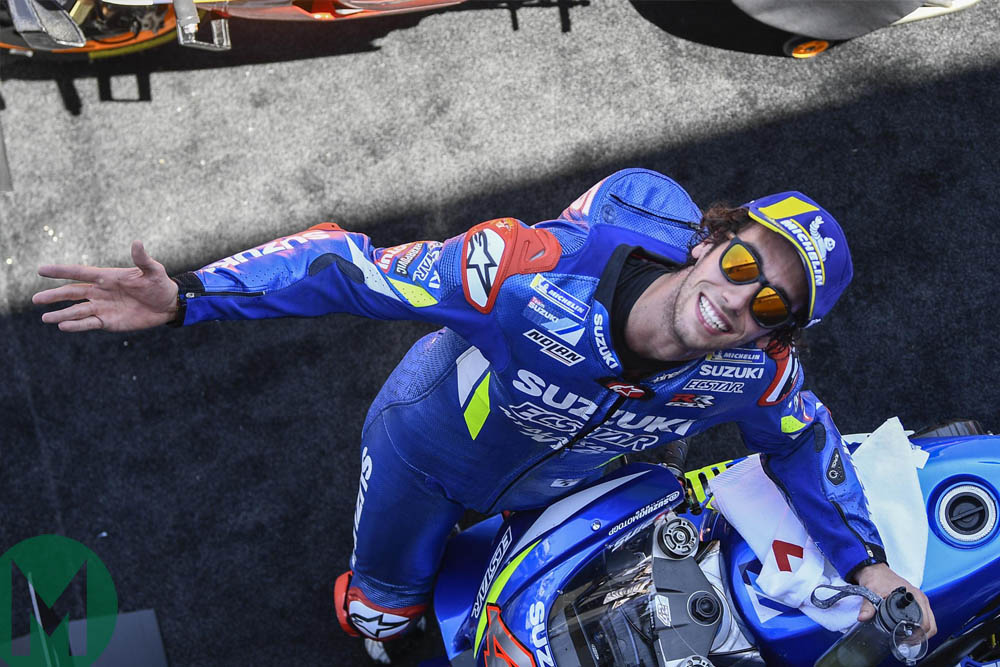 After four races Álex Rins stands second in the points chase, one point behind Márquez, confirming that Suzuki can fight for a four-stroke MotoGP championship for the first time.

One thing prevented Rins from fighting Márquez for victory at Jerez. The Spanish youngster qualified on the third row. This year he has yet to qualify on the first two rows – he was ninth quickest at Jerez, seventh at COTA, 16th at Termas and tenth at Losail. On Sunday he completed the first lap in sixth place – 1.4 seconds behind Márquez and with three Yamahas and a Ducati in front of him. He finished the race in second place, 1.6 seconds behind Márquez, who eased off on the final lap.

In other words, he had blown his victory chances on Saturday afternoon. Somehow he needs to get his head around riding an out-and-out hot lap in qualifying.

No doubt this is the downside of his glass smooth riding technique, which can work so well in race situations. Riders who ride very smoothly, wheels in line, don’t like the feeling of the bike starting to move around as it teeters over the limit. Somehow Rins needs to get the feeling for that.

In the race, Rins and his Suzuki worked well, using their stunning corner speed through the track’s numerous sweeping turns, but that wasn’t enough on its own when you are fighting with other motorcycles, especially a Desmosedici.

It wasn’t easy for him to find a way past Andrea Dovizioso, because the fast Turn Five is followed by the back straight and Pedrosa hairpin, which work well for the Ducati’s braking and acceleration performance. And the fast rights at the end of the lap are followed by the Lorenzo hairpin. Thus however fast he rode through the sweepers, he struggled to find enough of an advantage to get past on the brakes. Indeed he did out-brake Dovizioso into the final corner, but the effort hurt his corner speed, so Dovizioso drove past on the exit.

His successful move on the Ducati came soon after, when he rode around the outside of the GP19 at the fast Turn Eight right-hander, then stuck it inside at the subsequent right-hander. This was exactly the same move that Valentino Rossi pulled on Dovizioso on the last lap at Termas; using the GP19’s high-speed turning issues to his advantage. 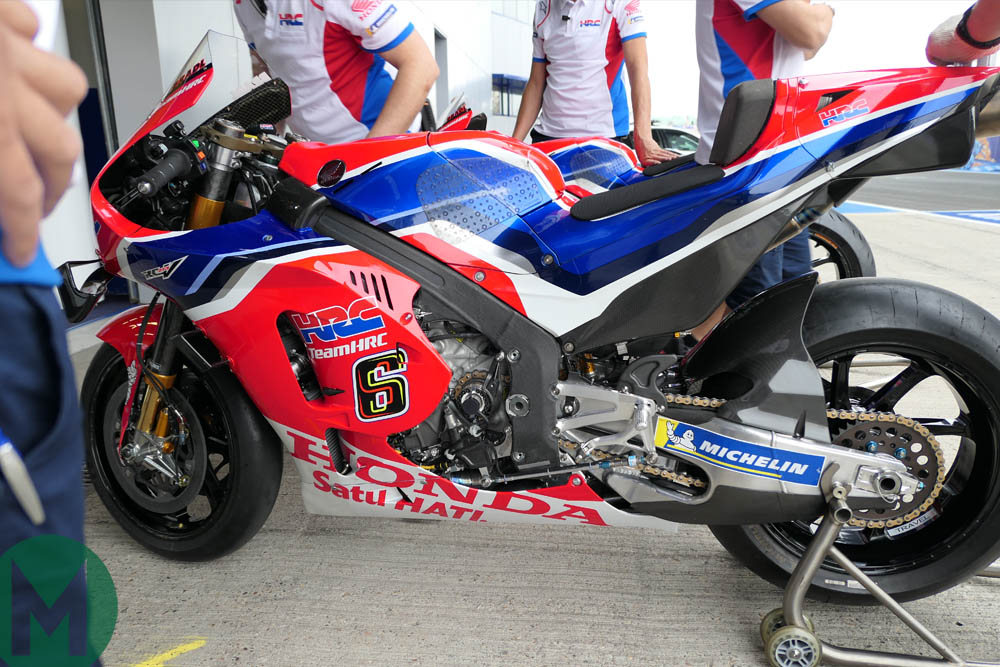 Stefan Bradl’s ride to tenth place was another highlight of the race. HRC’s German test rider hadn’t raced since last November, when he subbed for injured Cal Crutchlow at Valencia. To make the top 10 in the toughest race on earth isn’t easy when you race once every few months.

The big question is how much of his speed came from Honda’s new black frame. Bradl rode the new frame back to back with a conventional alloy frame during practice. The frame isn’t carbon-fibre but is wrapped in carbon fibre, to damp the flex character of the alloy frame. But the frame itself is different from those used by HRC full-timers. Each beam features a longitudinal stamping, presumably to increase longitudinal stiffness and allow reduced lateral stiffness. If Márquez likes the frame from Monday’s tests, might he race it at Le Mans?