The battle for the 2020 MotoGP world championship started at Valencia this week, with most of the factories unveiling different chassis and upgraded engines 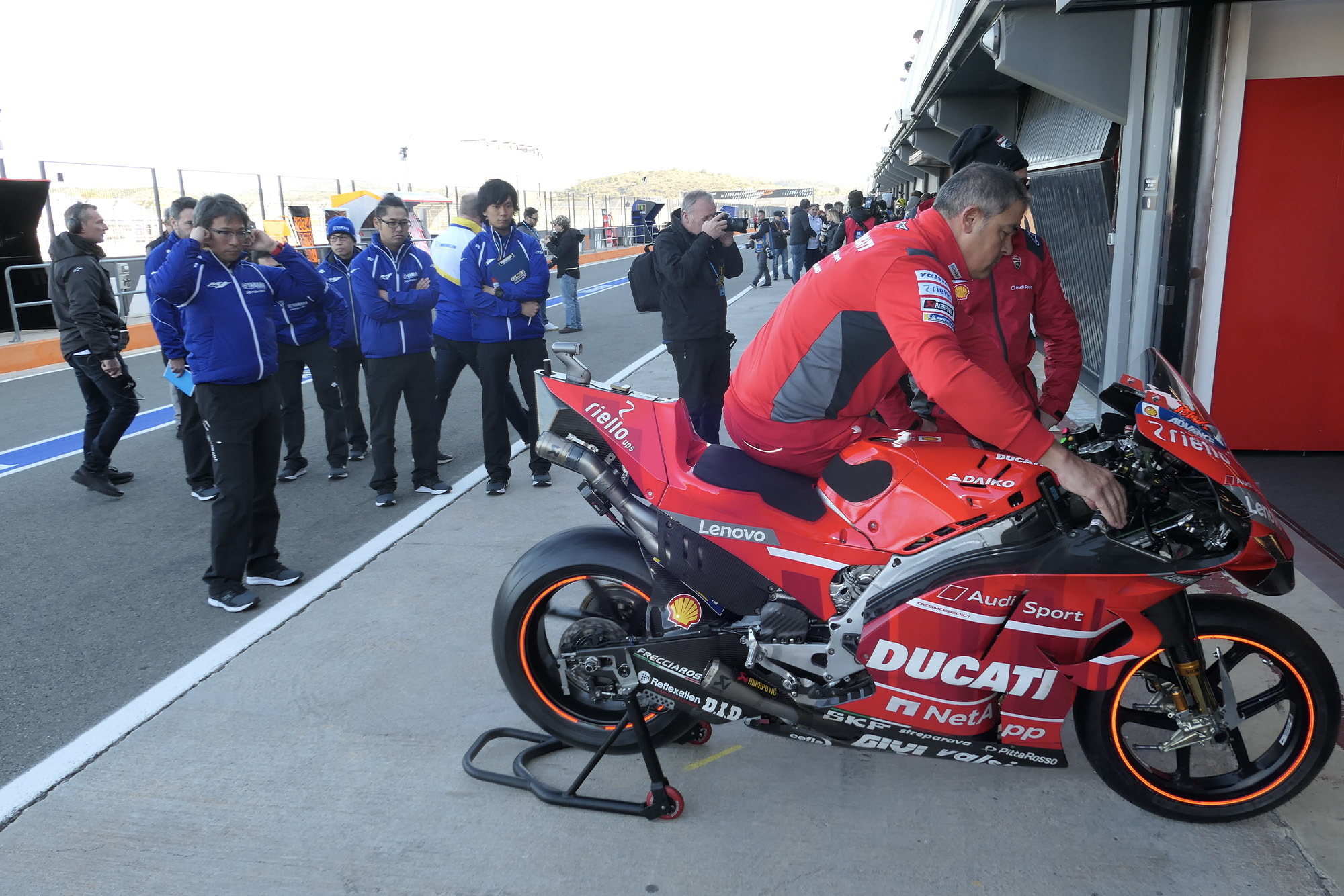 You know testing is underway when engineers start spying on their rivals Photo: Oxley

MotoGP riders are still roaring around Valencia as I write this. But don’t worry, nothing crucial is likely to happen between now and late this afternoon, when the sun will sink and track temperature with it, bringing to an end the first pre-2020 tests.

Don’t take the lap times too seriously – at this stage they are pretty much irrelevant. Valencia isn’t the kind of track that allows a well-sorted MotoGP bike to really show itself. And the times all depend on who can be bothered to let it all hang out on soft tyres at exactly the right moment when the asphalt is at its best. Lap times don’t matter until March 8.

What are all the factories working on for next season? They are all working on the same things or a combination of the same things: maintaining rear grip during braking, getting the bike to turn when the rider releases the front brake, getting the bike to turn quicker mid-corner so the rider can get on the throttle sooner and matching the engine’s torque curve to the rear tyre profile to improve corner-exit traction and tyre life.

Pretty much everyone had new frames at Valencia, all designed with some or all of these goals in mind. And five of the six factories tried different engines, because their goal is to finalise their 2020 engine specs after next week’s year-ending Jerez tests, so they can build enough engines to start testing in February. 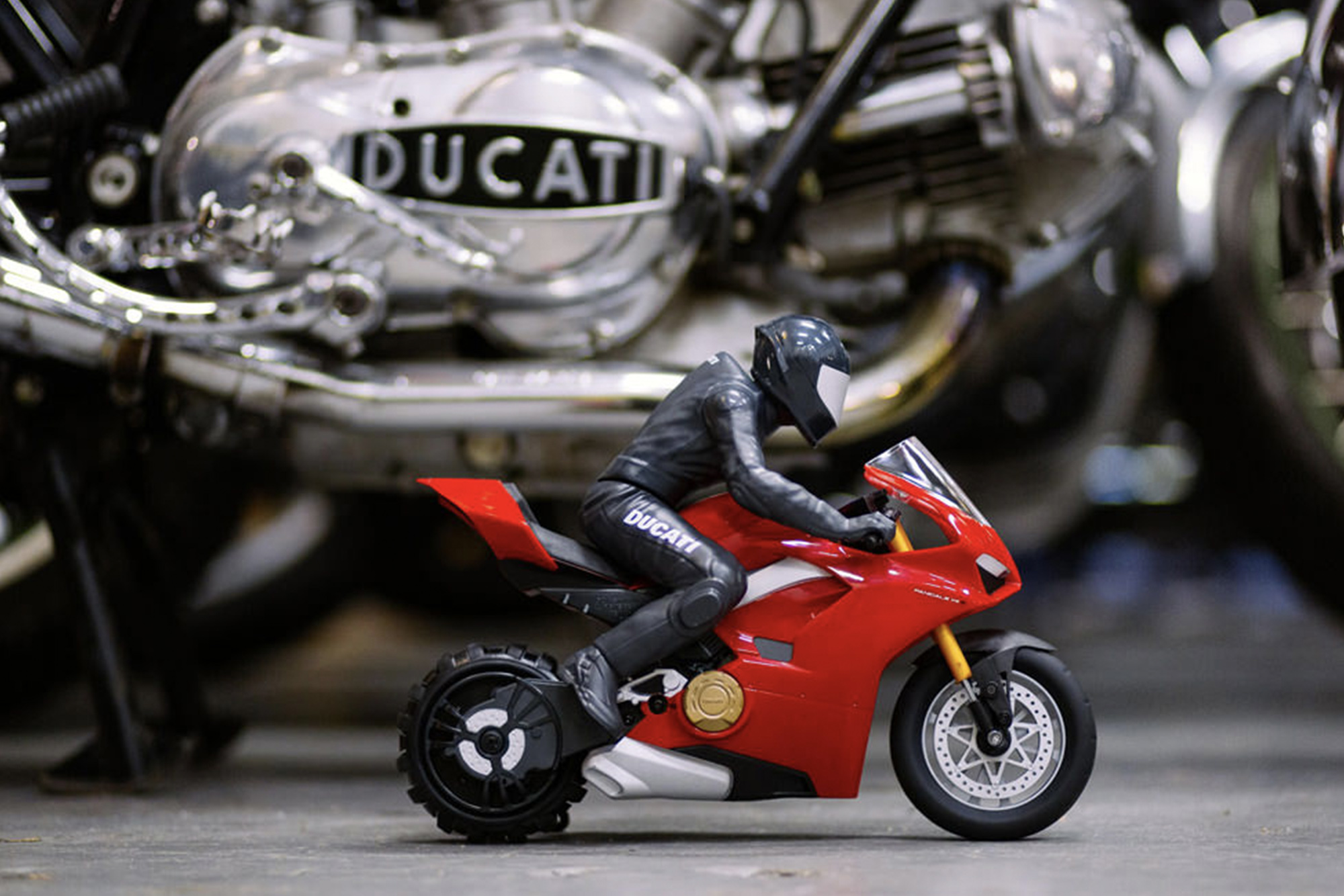 Ducati is making another step forward on its aluminium-beam frame journey. The target is the same as always: to allow the rider to get the bike turned quicker mid-corner, so he can commence the exit phase earlier and use the Desmosedici’s greatest strength, brute horsepower, sooner.

Andrea Dovizioso has been requesting this improvement for years and the Italian is optimistic the 2020 prototype frame is better.

“It’s nice to feel the difference in the chassis,” said the three-times MotoGP runner-up. “It looks like in the middle of the corner we are a bit better and if you can turn in a better way the exit is always better.”

At the same time, Ducati is working to further improve the exit phase by smoothing power delivery to better match Michelin’s rear slick.

“We are understanding how to get the maximum power into the bike at what lean angle,” said Pramac rider Jack Miller. “We’re just trying to be smoother in general, especially with the way the Michelins are, and understanding how we can get more consistency out of the bike with used tyres. The biggest thing to take the most advantage out of the bike is being as smooth as possible with the rear tyre, plus we’re trying to gain edge grip and trying to get a little more turning happening.”

As usual, Ducati won’t reveal its new aerodynamics until Qatar in March, so that rival factories can’t spend the winter copying its aero. 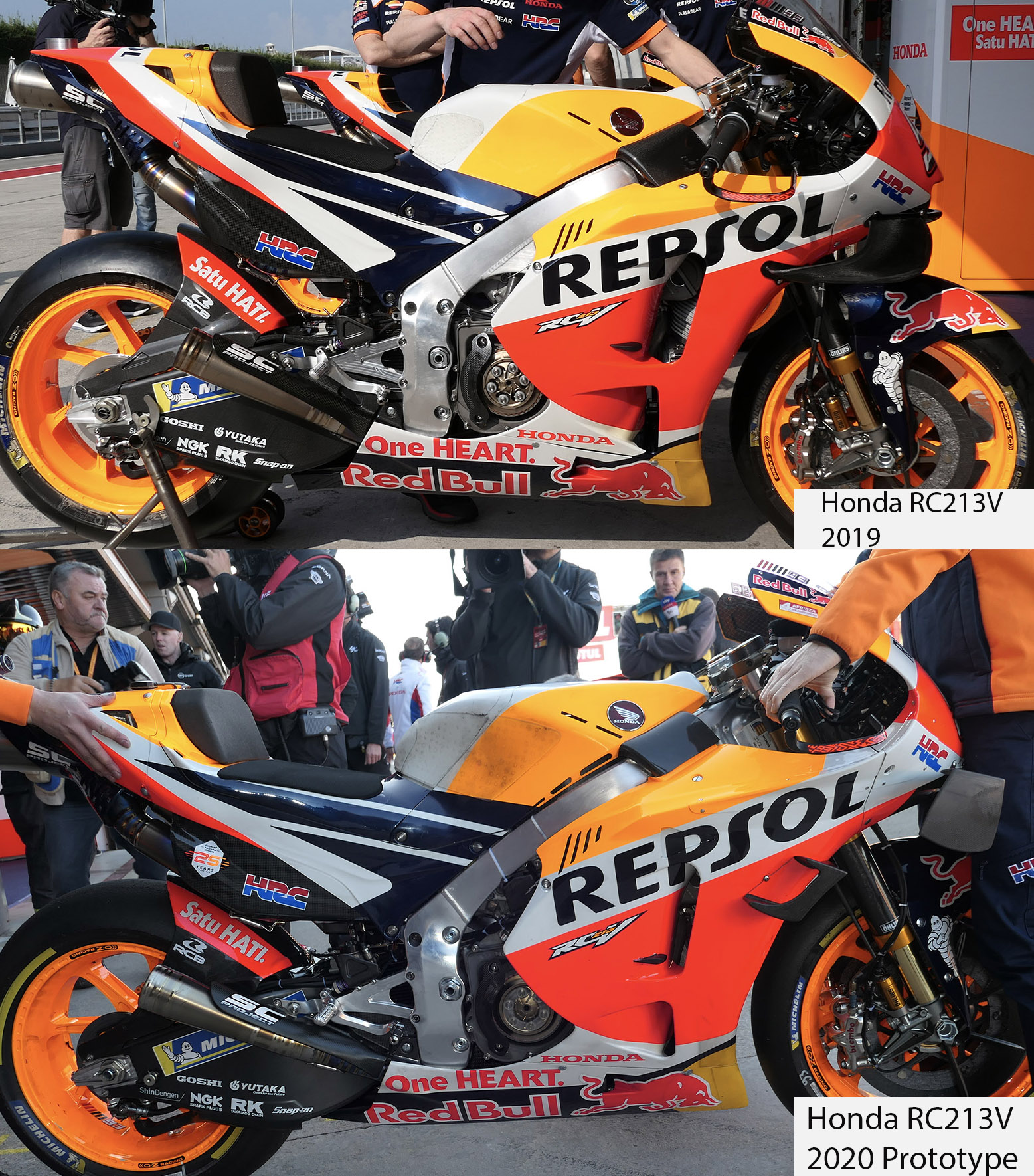 Honda has many different chassis circulating between Marc Márquez, Cal Crutchlow and test rider Stefan Bradl. HRC is focusing on making the RC213V easier to handle, especially into corners, both through chassis behaviour and negative torque behaviour.

In fact, HRC has been in semi-2020 test mode since Márquez wrapped up the title in Thailand. During the Valencia race weekend, he tested a new frame with a different steering head and no rear engine hangers. Crutchlow tried the same frame in testing and there are several other 2020 variants, with rear hangers, all of them with different steering heads. HRC is looking for better turning, a friendlier ride and better rear contact into corners.

“We’re looking to be stronger in the braking zone compared to this year’s bike,” said Crutchlow, who also evaluated new aerodynamics. “The new bike is a step forward and I felt positive with the front, which was where I struggled more this year.”

Both Márquez and Bradl crashed their prototype bikes on Tuesday, simply because the track was so cold.

“We are trying some 2020 steps, not the complete 2020 bike, but the starting point is good,” said the winner of six of the last seven MotoGP crowns. “I liked the new chassis I tried on Friday and I’ve tried different ones since then as well. Me and Cal are working in different ways to understand more and more things for Honda.”

Márquez’s 2020 team-mate Alex Márquez started his MotoGP career in the LCR garage, riding Crutchlow’s 2019 bikes. He made the mistake of starting day one too early, when the track was too cold, and fell at one of the anti-clockwise track’s few left-handers.

“Alex was one of the first out – I said, wow, he doesn’t know what the Michelins and a MotoGP bike are like in very cold conditions!” said Márquez senior.

Despite the crash, the Moto2 champ was happy enough. “The power of the MotoGP bike is amazing but the biggest change is the carbon brakes, so I have to learn how to work with them, plus the tyres and the electronics,” he said. “I feel comfortable on the bike at the moment, but I know that problems will come as I start finding the limit. I need to keep learning and growing, then we will see about the first race in Qatar in March.” 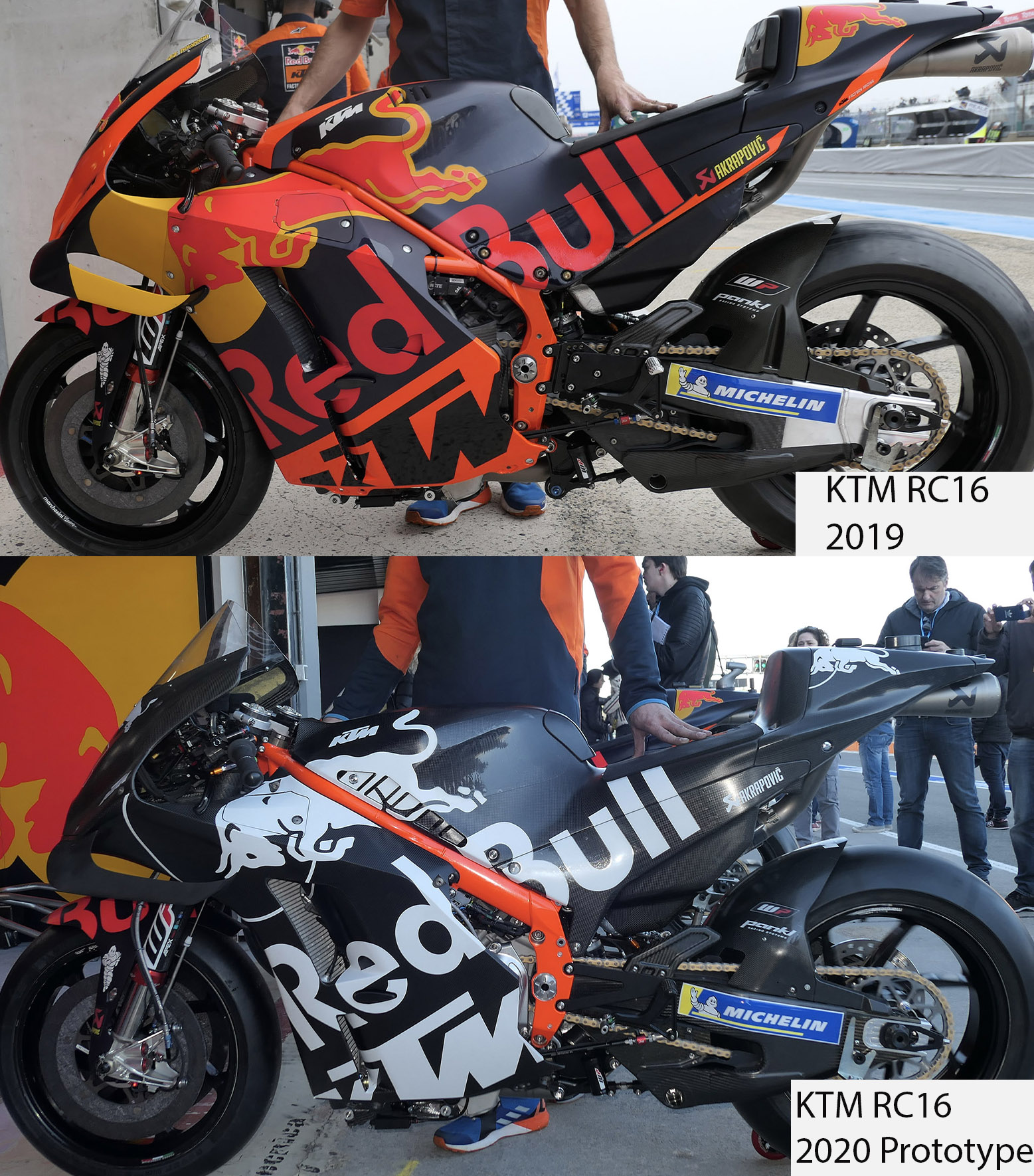 KTM’s tubular steel chassis undergoes its first major redesign for 2020, the Austrian brand’s fourth season in the premier class. The main frame sections are no longer round tubes but deeper oval tubes.

Better lateral flex is one goal, for improved turning, grip and traction when the bike is riding through corners. Also better longitudinal rigidity for more braking stability.

“The chassis feels very good and it’s also much, much lighter, so we are gaining a lot of benefits,” said factory KTM rider Pol Espargaró. “We are working to improve mid-corner, to find grip and turning which we’ve struggled with, especially when the tyres are gone. This is a good step. We had tried many, many things with the electronics but decided the problem was mechanical grip. Testing this chassis makes the bike turn better and gives better traction. We are also trying different things in the engine for more torque and power.”

New team-mate Brad Binder was wide-eyed and grinning after his first outing as a MotoGP rider.

“Incredible!” the South African beamed. “From lap one it was like another world. MotoGP bikes are insane, the amount of power, the wheelying! I still don’t really understand what I’m doing. I’m just trying to understand what’s going on. The feeling is incredible. Lap by lap it doesn’t matter if I’m fast or slow, but things are coming along easier.

“I did one lap behind Pol and I learned a lot. The more I see what other people are doing the easier it’s going to be to improve. It was super cool, so much fun. At the beginning I was almost worried – I was like, jeez, this is insane but the more laps I do the more comfortable I feel.

“The hardest thing for me is the wheelie – when I come out of a corner and pick up the bike I keep rolling the throttle, then opening it and making it harder for myself. It’s really hard for me to trust the electronics.”

Suzuki is the most conservative factory of all, which is why the GSX-RR barely seems to change from year to year. The factory knows it has a very well balanced bike, so it doesn’t want to spoil that; Suzuki improvements are always subtle, rather than radical.

At Valencia, Álex Rins and Joan Mir tried the 2020 engine and a few front-end chassis parts.

“The new engine is quite nice, quite rideable, quite smooth,” said Mir. “It’s positive, but we have to adjust the electronics to make a real improvement. We are also working on the chassis to turn a bit better. Our turning is good, but in slow corners we struggle a bit and it looks like we made a little improvement there.” 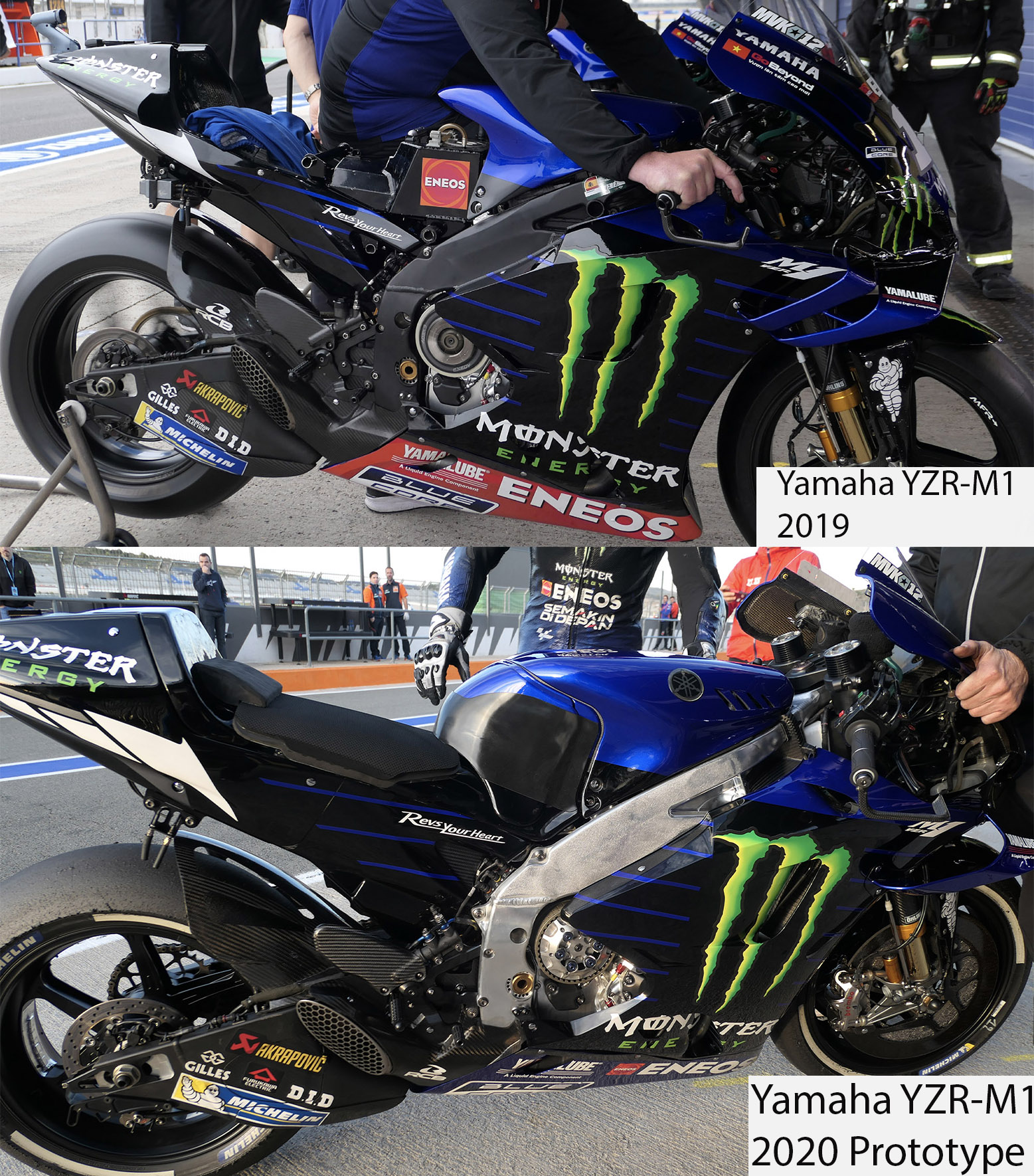 Yamaha is working hard to continue dragging itself out of the hole in which it’s been for the last few years. Maverick Viñales and Valentino Rossi tried Yamaha’s 2020 engine and the most radically different YZR-M1 frame in more than a decade.

The frame spars are machined from solid aluminium alloy as usual but are are very different to previous models, with a very different construction around the steering head area. Yamaha is obviously trying to change stiffness in that area, possibly to make the bike turn better, so that riders don’t have to lean so far for so long through the corners, which is one cause of the M1’s tyre degradation problems.

“The frame is different but the feeling when you ride is very similar,” said Rossi. “Yamaha is trying for better agility when you brake and enter, so you can be a little faster and more precise entering the corner. I like the new chassis.

“But electronics and engine are where we have to improve the most, especially the engine. The first impression of the new engine is quite positive, but the way is long because there’s quite a big difference to the others, especially in top speed. I like the way Yamaha works now. There’s less confusion than in the past, the programme is clearer.”

Rossi has also started working with new crew chief David Munoz, from the Sky VR46 Moto2 team. “The feeling is good, we change the way we work in the box,” he added.

Yamaha’s star rookie Fabio Quartararo also got to test some new parts, including the carbon-fibre swingarm that both factory riders tried earlier in the season, before reverting to the aluminium unit.

Aprilia’s main focus at the moment is back at the factory in Noale, where chief engineer Romano Albesiano is creating a totally new V4 engine for 2020. At Valencia, the team tested various new parts but Aprilia’s real 2020 testing programme won’t start until the new bike appears at Sepang in February.