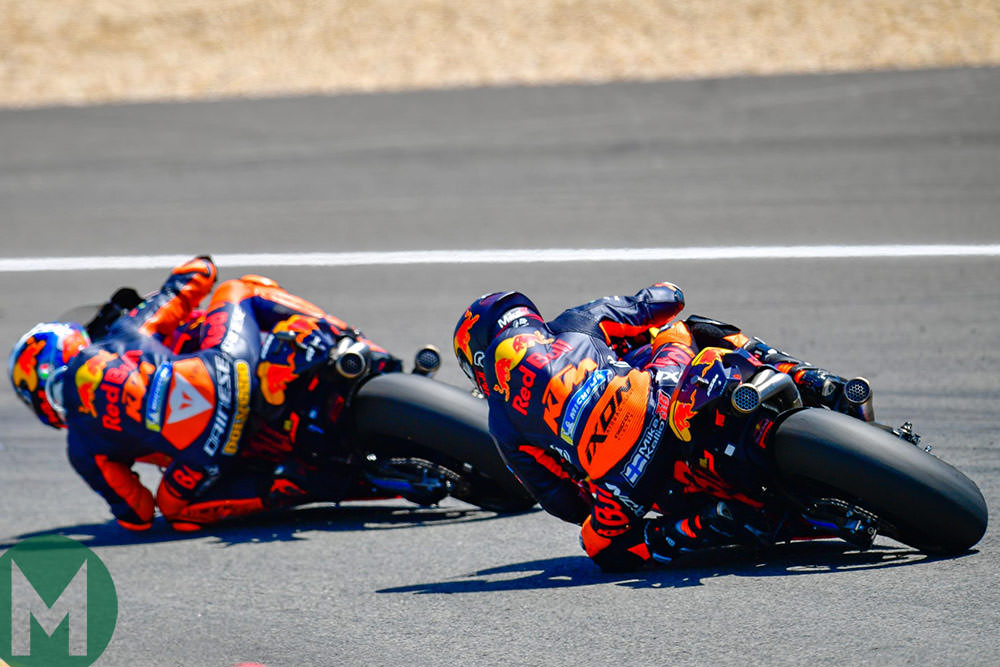 MotoGP is better than it’s ever been for several reasons, including 2016’s move to control software.

Dorna’s control software narrowed the performance gap between the motorcycles and most importantly gave control back to the riders, so when you see Marc Márquez or Johann Zarco smoking the rear tyre, that’s their right wrists playing the game of risk versus reward, rather than a little black box playing rhythms with its algorithms. Up to a point, anyway.

For years Dorna CEO Carmelo Ezpeleta fought with factory bosses to ban factory-made software, which was transforming MotoGP bikes into computer-controlled missiles. It was a huge day for Ezpeleta when he finally won the battle to introduce control software (and God only knows how he did it).

Now Dorna is again downgrading electronics to further close the performance gap and remove more electronics rider assistance: from the end of this season tailormade factory IMUs will be banned.

What’s an IMU? An inertial measurement unit is to the ECU software what your sensory system is to your brain. It tells the rider-control systems where the bike is and what it’s doing: pitching, yawing, rolling and so on. A MotoGP IMU consists of gyroscopes and accelerometers, which perform these measurements to calculate banking rate, pitch rate and other dynamic factors. Accelerometers were first seriously used in the World War II, when the US Air Force used them to monitor g-forces on fighter pilots.

In theory, an IMU’s sole purpose is to make calculations from lateral g-forces and other measurements it makes, then send the results to the ECU, which uses the numbers to operate the traction control, wheelie control, engine-braking control and launch control.

So why does Dorna want to ban tailormade IMUs? Because it is certain that most factories and teams are bending the rules and using the software within their own IMUs to help the ECU software perform better. This is illegal but almost impossible to police.

How do you fiddle an IMU? It probably goes something a little like this. Let’s say the engineer wants to alter the traction-control algorithm to save the rear tyre so the rider can be faster in the final laps of a race. Unlike MotoGP’s old tailormade software, the Dorna kit can’t help here because it can’t relate the bike’s banking rate to the rider’s torque demand (throttle opening). And the engineer can’t fiddle the Dorna software because MotoGP technical staff can look inside whenever they want, if they suspect someone is up to tricks.

Instead of going downstream to the ECU, the engineer therefore goes upstream to the IMU, which has its own calculation software and isn’t subject to Dorna control. IMU software is supposed to be very basic – it’s there to clean up signals from the gyroscopes and accelerometers, make calculations and send them to the ECU.

But an engineer, team or factory hellbent on victory – which means all of them – could programme the IMU to do something more useful. By combining outputs like banking rate with other inputs they can make their traction control better than their rivals’ traction control.

Might this explain why some MotoGP teams are struggling more than others with their electronics? Movistar Yamaha’s Valentino Rossi and Maverick Viñales are currently having a nightmare with their traction-control system, but this is most likely for other reasons.

Most people in the know think it inconceivable there’s anyone who isn’t fiddling their IMUs. That’s how racing works: you ban tailormade ECUs and software but allow teams to continue with their own IMUs (which are either made in-house or brought in) so immediately the race begins to find an advantage within the IMU.

The advantage that some other teams have over the Movistar outfit is more likely down to deeper knowledge of Dorna’s Magneti Marelli software, which allows them to number-crunch the system’s maps and algorithms more effectively. The other factories have either hired former Magneti staff or they work more closely with the Italian company. Only Yamaha seem determined to unlock the secrets of system on their own. This method makes sense, because Yamaha’s electronics staff will learn a lot, which is one of the fundamentals of going racing, but it’s hurting Rossi’s and Viñales’ results.

Of course, no one knows for sure what effect a spec IMU will have on the racing, but banning tailormade IMUs does make sense, because what’s the point of having a control ECU and software if you can fiddle them with your own IMU?

Most likely, a control IMU will further close the performance gap between the different machines. This is a good thing, because closer bikes mean closer racing means better entertainment, which is great for the fans, which means it’s also great for Dorna and the paddock as a whole. On the other hand, it’s worth remembering that closer racing also means more aggression, more collisions and more pile-ups, as we’ve seen lately.