This year MotoGP is more unpredictable than ever, which is great for fans. Here’s why 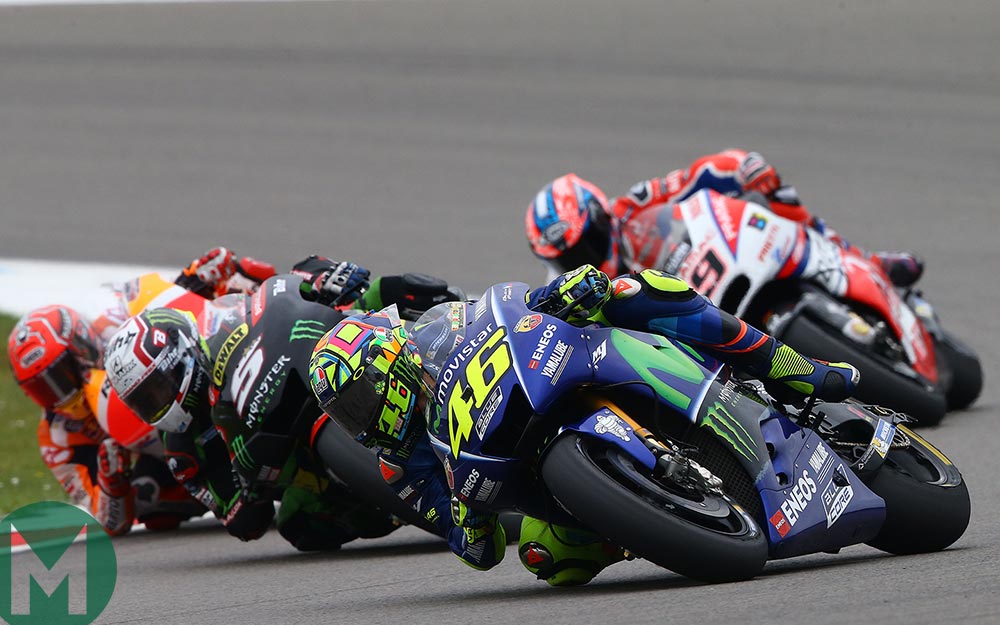 This may turn out to be the best season of Grand Prix racing ever. It is already the closest-ever contest for the premier-class world title: after nine of 18 races the top four are closer on points than they were after the season-opening race in March. Championship leader Marc Márquez and the fourth-placed Valentino Rossi are separated by just 10 points, with Maverick Viñales and Andrea Dovizioso in between. This has never happened in the previous 68 seasons of Grand Prix competition.

The racing has mostly been good, too. There have already been five different winners and last time out in Germany the reigning world champion aboard the latest factory weapon spent much of the race fighting with a rookie using a two-year-old chassis.

I wouldn’t have been surprised if Dorna CEO Carmelo Ezpeleta had died and gone to heaven at the Sachsenring. Right there, before his very eyes, was the culmination of a life’s work: an indie rider hassling a factory rider, lap after lap after lap.

Ezpeleta has spent years writing a more egalitarian MotoGP rulebook, with the aim of creating closer racing that will have more people turning on their televisions, which increases revenues and boosts Dorna’s profits.

There’s no doubt that his efforts have paid off. But the rulebook doesn’t account for MotoGP’s current thrilling unpredictability, which is what’s turning on so many fans this year. More than ever before, none of us has a clue who’s going to win next Sunday’s race, let alone the championship. And the riders and teams are as much in the dark as we are.

So what’s going on? Here’s a nine-time world champion to explain.

“We have a very different feeling from one track to the other with the tyres,” said Rossi in Germany. “It’s the great surprise of this year, because last year the situation was more constant. This is very difficult to manage because you never know what to expect.”

This unpredictability is nirvana for fans but not so much for riders and teams, who aren’t so much unhappy with this year’s Michelins as confused by them.

The issue is the relatively narrow operating range of the tyres. Michelin says its MotoGP tyres work within a 15-degree temperature range – fronts at around 90 to 100 degC and rears at around 110 to 120 degC – but this seems optimistic. One of the contestants for the championship recently told me that the window is “very, very, very, very small”.

Riders and teams therefore face a special challenge: at every race they must adjust the motorcycle to generate exactly the right temperature to suit that weekend’s tyres. This is what they’ve always done, of course, but the window is narrower than ever and it changes all the time, which explains the topsy-turvy nature of the 2017 championship: if you make it into that window you will challenge for the win, if you don’t you won’t finish in the top five.

In chasing that window, teams are making bigger set-up changes than usual – even on Saturday afternoons they are adjusting geometry, wheelbase, engine position and centre of mass. If they do get into the window they cross their fingers and hope that track temperature stays the same on Sunday. Meanwhile those who don’t find the window pray for a hotter or colder race day, which might move the window in their direction.

It is the randomness of the situation that riders and teams don’t like. Twenty-first century motor sport is mostly a science, and science hates randomness, but this is the reality so riders and teams must adapt. The secret is to keep an open mind and keep chipping away, even if you feel like you’re way outside the window on Friday or Saturday afternoon.

No one – except Michelin – knows why the performance of this year’s tyres is less consistent from one track to the next than last year’s, but some teams do say their job has been further complicated since Michelin introduced its stiffer construction front slick at Mugello. This year’s bikes weren’t developed around this tyre, so its late arrival has added another level to the labyrinthine task of machine set-up.

There are some races where we do have a clue about who might make it into the window and onto the podium. This year’s Jerez, Le Mans, Mugello and Barcelona races were all won by factories who had tested at those tracks, presumably because Michelin produced its race tyres from data gathered at those tests, which would inevitably favour some factories over others. It’s worth noting at this point that Márquez tested at Brno during the summer break.

Most fans will no doubt shout “boohoo!” at these tales of pitlane complications. Why should they care that riders and teams have to scratch their heads a bit harder than normal, so long as every Sunday afternoon delivers a fun time sitting on the couch, cheering at the telly? And they are right, of course, because it’s the fans who pay for MotoGP, while the riders and teams are on the other side of the financial equation.

And you can be sure which side of this particularly argument is inhabited by Ezpeleta, who knows that fans love a surprise on Sunday afternoons. At least we haven’t sunk to the depths of Formula 1 and its recent television tyres, designed specifically to add excitement to the racing. But some MotoGP riders do feel that this year’s Michelins have too much of a say in who wins and who doesn’t.

Making tyres for MotoGP bikes isn’t easy. The way Michelin goes about the job is different to how Bridgestone went about it, but that doesn’t mean the French company is doing a worse job: plenty of lap and race records are getting broken, even though Michelin is still learning its way back into MotoGP after a seven-year absence.

Bridgestone too had issues during its seven years as MotoGP’s control rubber supplier. Its tyres had a broader operating range, because its engineers had no choice but to design this feature into their tyres. Bridgestone sea-freighted tyres to most races, so it didn’t have the luxury of producing tyres according to the latest weather forecast. Bridgestone’s problem was that its tyres were too slow to warm up and too quick to cool down, which caused plenty of crashes, especially during the early years, when corner-entry highsides (and the injuries that go with such crashes) were a real concern.

The unpredictability of Michelin’s 2017 tyres isn’t intrinsically good or bad, it merely depends on where you are standing, or sitting.