…and it probably is, but even if Andrea Dovizioso fails to climb the cliff at Valencia, he can still be satisfied with a near-perfect 2017 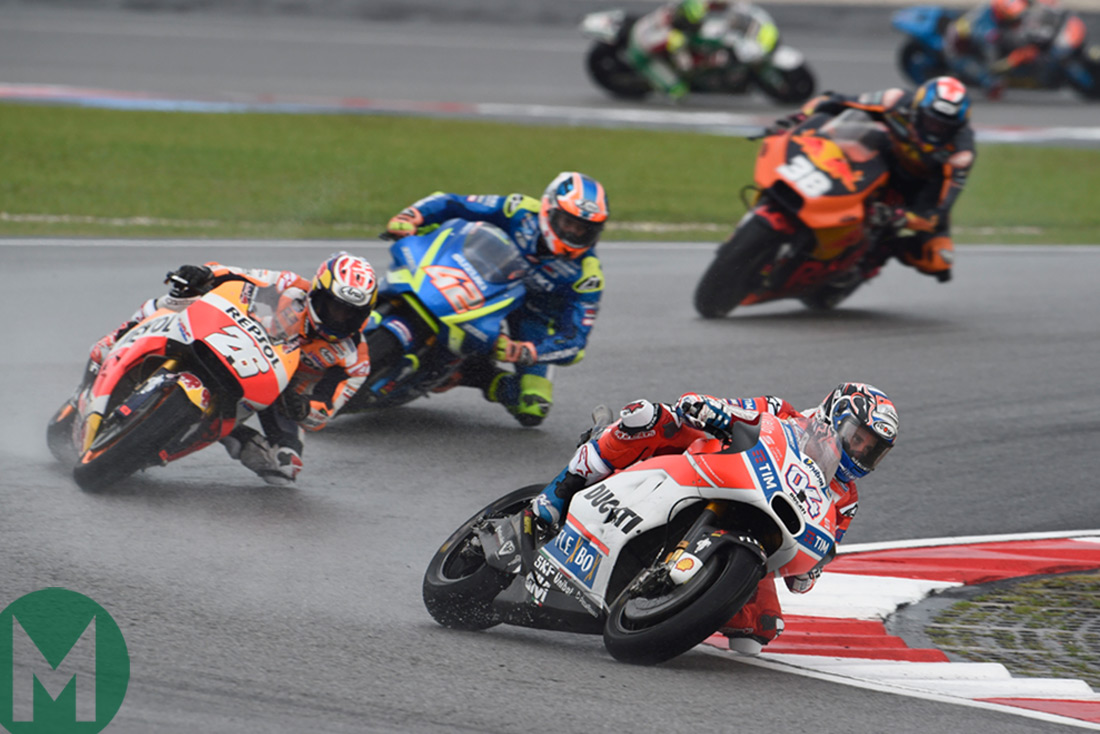 The odds will not be stacked in Andrea Dovizioso’s favour when he gets to Valencia next week. But there’s a tired old saying we’ve been regurgitating in the MotoGP media centre for the past three decades or so: anything can happen in motorcycle racing, and usually does.

Or as the late, great Nicky Hayden put it: “That’s why we line up on Sunday – you never know what’s going to happen.”

Because neither were the odds stacked in Hayden’s favour when he travelled to Valencia in November 2006. That year everyone thought the title was already as good as done. Valentino Rossi went into the final race eight points ahead of Hayden, having won five races to Hayden’s two. But Hayden made it happen. While Rossi seemed strangely overawed by that momentous day, the American risked everything. “All In” proclaimed the logo on the backside of his leathers – he put all his chips on the table and it worked.

It’s kind of nice that this year’s season finale will be a minor redux of 2006, less than six months after Hayden lost his life following a cycling accident.

This year is very different to 2006, of course. The gap between Dovizioso and Marc Márquez isn’t a tricky eight-point gap, but a nigh-on-impossible 21 points, despite Dovizioso’s near-perfect season. There are only two results he must be lamenting, and neither of them his fault: in Argentina, he was skittled by Aleix Espargaró (his only no-score) and in Australia, he was nobbled by his Ducati’s dislike of Phillip Island’s long, sweeping corners.

The riders are different too. Certainly, Dovizioso is a very different racer to Hayden. I’ve never known a MotoGP rider put so much heart and (good-natured) emotion into his racing as Hayden did. Dovizioso is all about the head. While Hayden made his name manhandling dirt-track bikes and superbikes with big handfuls of throttle, Dovizioso climbed the ladder on 125s and 250s, using precision and momentum all the way.

Dovizioso is clever, he thinks a lot and he isn’t the kind of rider who wins races by bending the laws of physics like Marc Márquez does. He wins races by applying science, not by riding around the outside of it. When his bike is good enough to win, he will fight for the win. When his bike is good enough for fourth, he will most likely finish fourth.

The former 125cc world champion’s final-corner defeats of Márquez at the Red Bull Ring and Motegi were inspired – turning the axe on the axeman – but he won both those races with brain, not brawn. And his sixth win of the year at Sepang on Sunday was a superb display of Dovizioso at his best. He steadily made his way forward and made every pass with surgical precision, always making the most of his bike’s positives in the risky conditions. Then he watched and waited behind his team-mate, studying the conditions and absorbing information from the man in front, then pushed into the lead.

It will be interesting to see how the sense of occasion affects him at Valencia. Will it inspire him to do things he’s never done before?

Probably not. “I have confirmed that it’s possible to win without doing crazy things,” he told me a while back. “The key to winning is a lot of things. You must put everything together and you must understand how you can manage every situation. It’s about a lot of work in a lot of areas. It’s about having the right mentality.”

At least the 31-year-old knows that he will have Jorge Lorenzo onside. This probably won’t make any difference, but never say never. 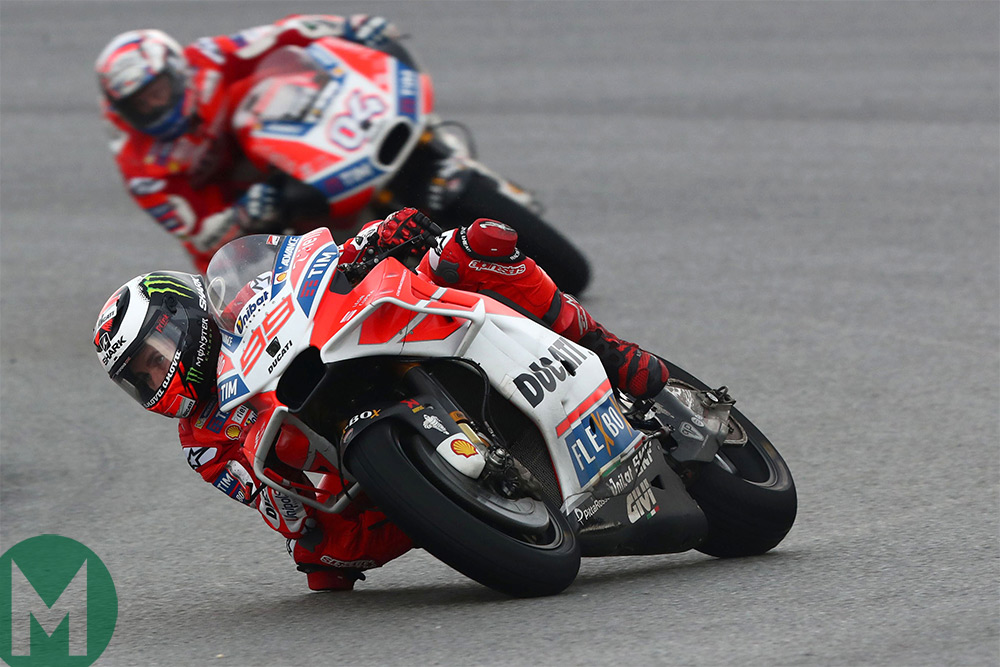 We still don’t really know if Lorenzo obeyed team orders at Sepang. He insists he didn’t see the coded “suggested mapping 8” message (I’m looking forward to seeing the T-shirts at Valencia) that popped up on his dash, telling him to surrender first place to his team-mate. I often don’t believe what riders say – they’ve all got secrets to hide – but this time I believe Lorenzo, because he crashed out of the lead at Misano while making a mapping change. That taught him not to change focus – from track to dash – in the rain, when it’s many times easier to make a mistake. Anyway, the dash message is irrelevant, because Lorenzo had already told us several times that he would happily come to the aid of his team-mate at the last few races.

In the coming seasons, we will surely see many more coded dash messages from teams to riders. It would be fun if the rules allowed fancier words; perhaps something like these from the Paul Verlain poem which the Allies used to alert the French Resistance on the eve of D-Day in 1944: “My heart is drowned in the slow sound, languorous and long.” That would look great, flashing up on your telly, via a Desmosedici’s dashboard.

Whatever coded messages Ducati beams to its riders at Valencia, Dovizioso knows that the only way he can lift the crown is by winning the race, while something happens to Márquez; a mistake, a crash or a bike problem. The Italian isn’t stupid, he knows the situation is largely out of his control. Even if he wins the race, Márquez only needs to finish 11th to retain his crown, so there’s not much he can do except do his best, like always.

“We are relaxed,” he said after Sunday’s race. “We were relaxed this weekend and we’ll go to Valencia relaxed.”

If the title does go to Márquez, Dovizioso will be disappointed, but he shouldn’t be too disappointed, because he challenged for the championship, winning six races over five months, which is four more than he won during the previous nine years.

Valencia will be a day to savour, whatever happens. During 69 seasons of Grand Prix racing the premier-class title has only gone to the final finish line on 18 occasions, so it’s a big deal.

The first time was in 1950 when Umberto Masetti duelled with Geoff Duke; the Italian on his fast but wayward-handling Gilera four, the Briton on his slow but sweet-handling Norton single. Masetti won the crown by a single point.

The last time was two years ago when team-mates Lorenzo and Valentino Rossi ended the day at Valencia separated by five points. You may remember it.

Related: Why did MotoGP get nasty?

Five of those 18 final-race showdowns were in consecutive seasons, from 1978 to 1983, four of them featuring Kenny Roberts. The first three he won, the last he lost to Freddie Spencer, who became the youngest rider to win the premier title. That year’s finale, at Imola in Italy, was another strange one. Spencer received death threats – written on notes posted into the back of his garage – from twisted fans of old warhorse ‘King’ Kenny. Spencer laid low in his motorhome most of the weekend and had bouncers protecting him on the grid. Roberts won the race; Spencer took the title, by two points.

Márquez took the youngest-ever record from Spencer in 2013 and will break a few more records if he wraps up his fourth MotoGP title in five years on November 12th.

However heavily the odds are stacked in his favour, it’s still an ‘if’…