Why is Dani Pedrosa entering next month’s Styrian grand prix at the Red Bull Ring?

The decision is best explained through a military analogy.

The man we need to listen to is Field Marshal Helmuth von Moltke the Elder, who led the ever-belligerent Prussians in their numerous wars during the late 19th century. (Some blame the Prussians’ lust for war for what happened in the first half of the next century.)

Von Moltke revolutionised military tactics and wrote plenty about how to fight battles. He is best known for these words, “No plan of operations extends with certainty beyond the first encounter with the enemy’s main strength”.

Or to put it more simply, “No plan survives first contact with the enemy”.

“You can pretend you’re fighting, but the reality is more different than you’d ever believe”

This is why Pedrosa will race KTM’s RC16 at Red Bull Ring on August 8, because no matter how many race simulations you do with a MotoGP bike they will be nothing compared to actually racing the bike.

It’s like comparing military manoeuvres with an actual battle. You can pretend you’re fighting, but the reality is more different than you’d ever believe.

Before a race simulation you don’t suffer from the stresses and pressures that have your heart rate and adrenaline spiking before a real race, which has a huge effect on your mental state.

During a race simulation you are on your own most of the time, so you’re more relaxed and you can comfortably choose the lines you want to take and focus solely on your riding.

A real race couldn’t be more different, because when the lights go out you make first contact with the enemy on your way to the first corner, where no prisoners are taken and all your carefully thought-out plans disappear in a chaos of clashing bodies and bodywork.

In a race situation you need your motorcycle to do different things. When another rider steals the strip of asphalt you were aiming at you need to instantly change your plan and your motorcycle needs to respond accordingly. You are pushing the bike to do one thing one moment and a millisecond later you need it to do another.

Imagine you’re riding along a road and someone pulls out in front of you, so you’re hard on the brakes and trying to steer the bike out of the danger zone. Some bikes are much better at this kind of thing than others.

When it’s you that’s on the attack you may brake later than you want to in your efforts to overtake a rival, knowing full well that you’re going to arrive at the corner a bit out of shape, but the motorcycle needs to help you get out of that mess and make the pass stick.

How a MotoGP bike responds to racing in the pack is particularly important at the moment because the huge amount of heat produced by each machine can raise the temperature and pressure of your front tyre, which can have a disastrous effect on turning and grip. So you need to work out ways to deal with that.

The extra stresses of racing also make riding much more physically and mentally demanding, so the bike needs to be a friend, otherwise your mind and muscles will be fried by three-quarters distance and your lap times will collapse.

The engineers need to design all these flexibilities into the motorcycle, even if they’re the kind of factors that won’t usually be an issue in testing.

Of course, MotoGP isn’t all about racing. The racing is currently so close that qualifying is much more important than ever before and even FP1, FP2 and FP3 can decide whether you qualify in Q1 or Q2, which can have a huge effect on what you can achieve on Sunday.

“My focus is basically to try to test the bike in race [weekend] situations like qualifying, practice sessions and race distance, riding against other riders,” says Pedrosa. “I will also be trying to see how the new race strategies work and to understand the rush moments, like FP3, qualifying, what happens at the start and how the ride-height device and other new technical parts work when you are riding together with other riders.”

How will Pedrosa go? The 35-year-old former 125cc and 250cc world champion hasn’t raced since November 2018, when he rode his last race with Honda at Valencia. The 31-times MotoGP race winner finished that rain-lashed outing in fifth place, the same position he took at the previous race at Sepang, in the dry.

Thus the Styrian race will be Pedrosa’s first competitive outing in 995 days. That’s a long time to keep hold of your killer instinct, but it’s impossible to know how he will ride at the Red Bull Ring, because all riders react differently in these circumstances. Some old racers are blindingly fast when they return to the track, others much less so.

“It’s difficult to say,” he adds. “I don’t know if I’ll click into racing mentality or not.”

The last time Pedrosa rode with the rest of the MotoGP grid was during preseason testing at Losail, Qatar, in March. He ended the first test 2.5 seconds behind pace-setter Fabio Quartararo. And at the second tests he was 3.4 seconds down.

Of course, he may not have been pushing for ultimate lap times in either of those outings and he will surely be faster at the Red Bull Ring, where he’s worn his own groove since starting his duties as a KTM test rider. 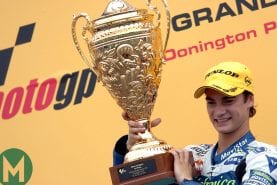 Pedrosa's MotoGP career may have been blessed with the HRC golden ticket, but racing, regulations and broken bones have (mostly) conspired against him Dani Pedrosa was once king of the…

Nonetheless Pedrosa will be doing very, very well just to get into the points. This year’s average lap time gap between the race winner and the last points scorer in 15th place is just 1.2 seconds.

This won’t be a concern for him. If it was he wouldn’t be racing. He will race to learn, not to obsess about the actual result. And the Red Bull KTM team isn’t worried about where he finishes.

“The expectation isn’t that Dani will perform – we don’t have a target for his result,” says team manager Mike Leitner. “The expectation is that he’s a test rider that can judge during a GP weekend the strong and not-so-strong points of our package and give himself a good indication for his future testing work.”

Pedrosa will also test update parts during the weekend. Might he even test the prototype 2022 RC16, because the factory has already been testing its 2022 machine for several months?

KTM has already applied for a second wild card for Pedrosa, depending on the gains from his Styrian weekend. No word on where that might happen – at the following weekend’s Austrian GP at the same track or somewhere else like Silverstone, Aragon or Misano?