Yesterday’s grand prix of the Americas was the most significant of the year so far. It announced (barring disasters) Fabio Quartararo as 2021 MotoGP world champion, while at the same time proclaiming Marc Márquez as the man he will have to beat if he wants to hold onto the crown in 2022.

There is no doubt whatsoever that Quartararo will be a worthy king. He’s won five of 15 races, stood on the podium a further five times, finished outside the top six on only two occasions and started from the front row at every race bar one.

Quartararo will be France’s first premier-class world champion in almost three quarters of a century of world championship racing. His success will also be well deserved by his home country, which four decades ago suffered a horrific period in its racing history, losing three of its top riders in just 13 months.

Quartararo has been a joy to watch all season. His riding aboard his factory Yamaha YZR-M1 is as spectacular as it is accurate, clambering all over the motorcycle to adjust its traction balance as required.

Significantly, he will be Yamaha’s first world champion since the start of the Michelin/Magneti Marelli era in 2016. Yamaha took longer than most of its rivals to figure out the new technical landscape but finally, after enduring its longest victory drought since it entered the premier class almost 50 years ago, it got there.

Of course, signing the right rider was a significant part of Yamaha’s turnaround.

Quartararo contested his rookie season in 2019, coming close to beating reigning champion Márquez on several occasions. Therefore the pair were expected to duel for last year’s title, but Márquez got hurt at the first race and Quartararo’s season slowly unravelled after a stellar start.

The COTA race suggests they will have their duel next year. 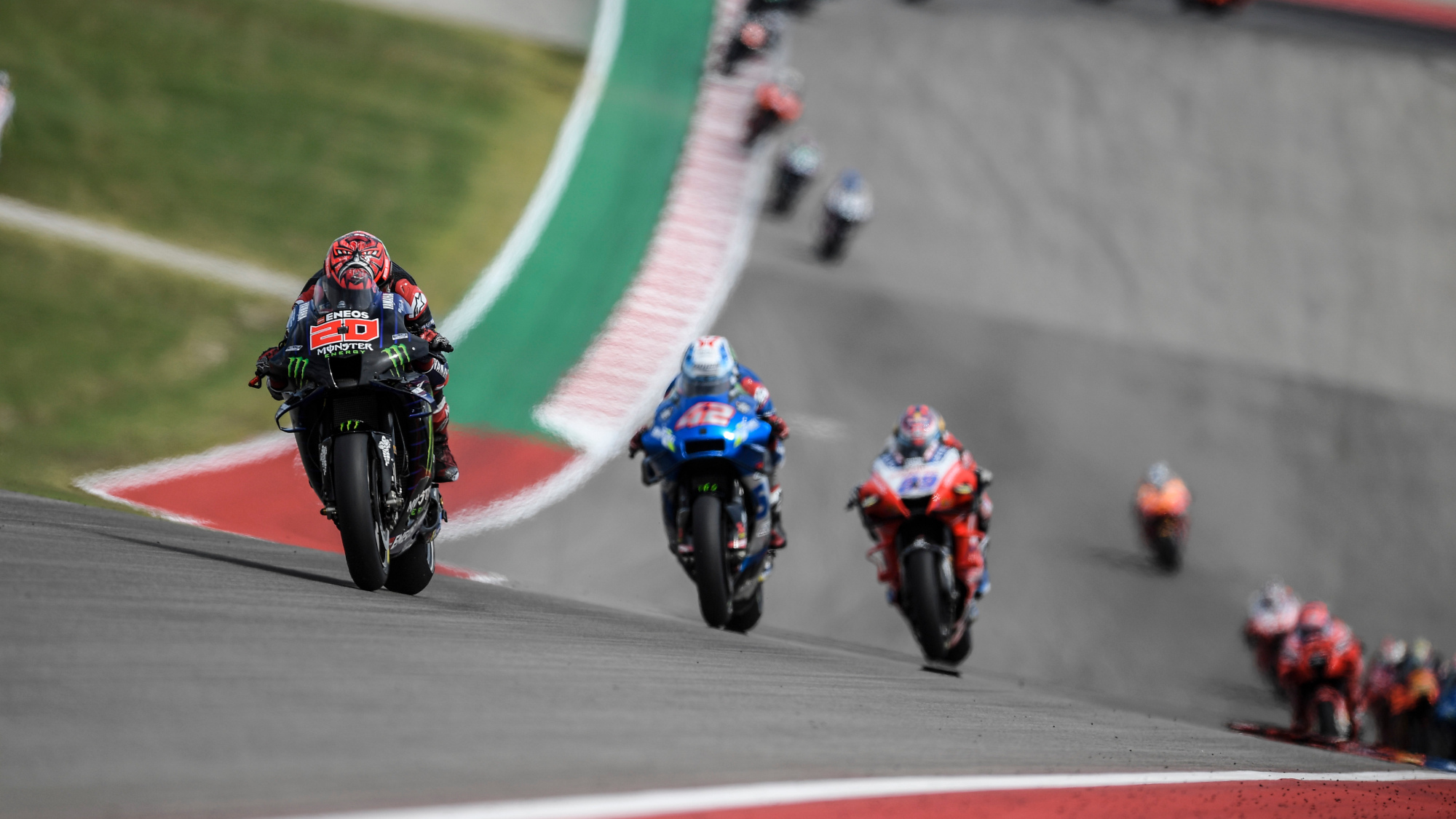 Márquez has won on six of his previous seven visits to the track, so he obviously loves the place. Nonetheless his remarkably dominant start-to-finish victory was his biggest result since his comeback from a nine-month victory layoff, bigger than first place at super-anti-clockwise Sachsenring in June, his first win since his 2020 Jerez crash.

COTA was hugely physically challenging, because of the dizzying track layout with its multiple changes of direction, the ridiculous bumps and the heat. Márquez was unfazed by them all, grabbing the lead at the start, controlling the early laps while he got a feel for his tyres and then pulling the pin on lap six of 20.

That lap and the next were each half a second faster than second-placed Quartararo’s, so in just two laps he had made the break from the pack, so he could ride his own race. That’s unusual in modern MotoGP. By the chequered flag he was 4.7 seconds in front, the biggest dry-weather win of 2021, apart from Quartararo’s 4.8-second margin at Portimao in April. 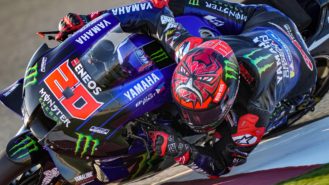 During the podium media conference Márquez kept dropping subtle hints that he has plenty more to come.

“I pushed hard only three or four laps, then when I saw the gap was increasing I was able to ride in [two minutes] 4.8, four-high at a constant pace, with some margin,” he said. “I had the margin to be a little bit faster. This is the first race this year that I came to with the intention of fighting for victory. I said that already in the press conference on Thursday. The weekend was good – Friday was really good, Saturday so-so, but today better.”

Although COTA was his 13th race since his comeback at Portimao, Márquez has yet to regain the man/machine intimacy that made him close to unbeatable before the accident.

“I need to keep working and keep pushing because the special feeling with the bike is still not there.”

The way Márquez rode before requires that special relationship, in which the rider knows the motorcycle so well that he knows what it’s going to do before it does it. This is what you need to teeter on the brink of disaster without tipping over the brink – you don’t only need to be at one with the bike you need to be ahead of the bike. 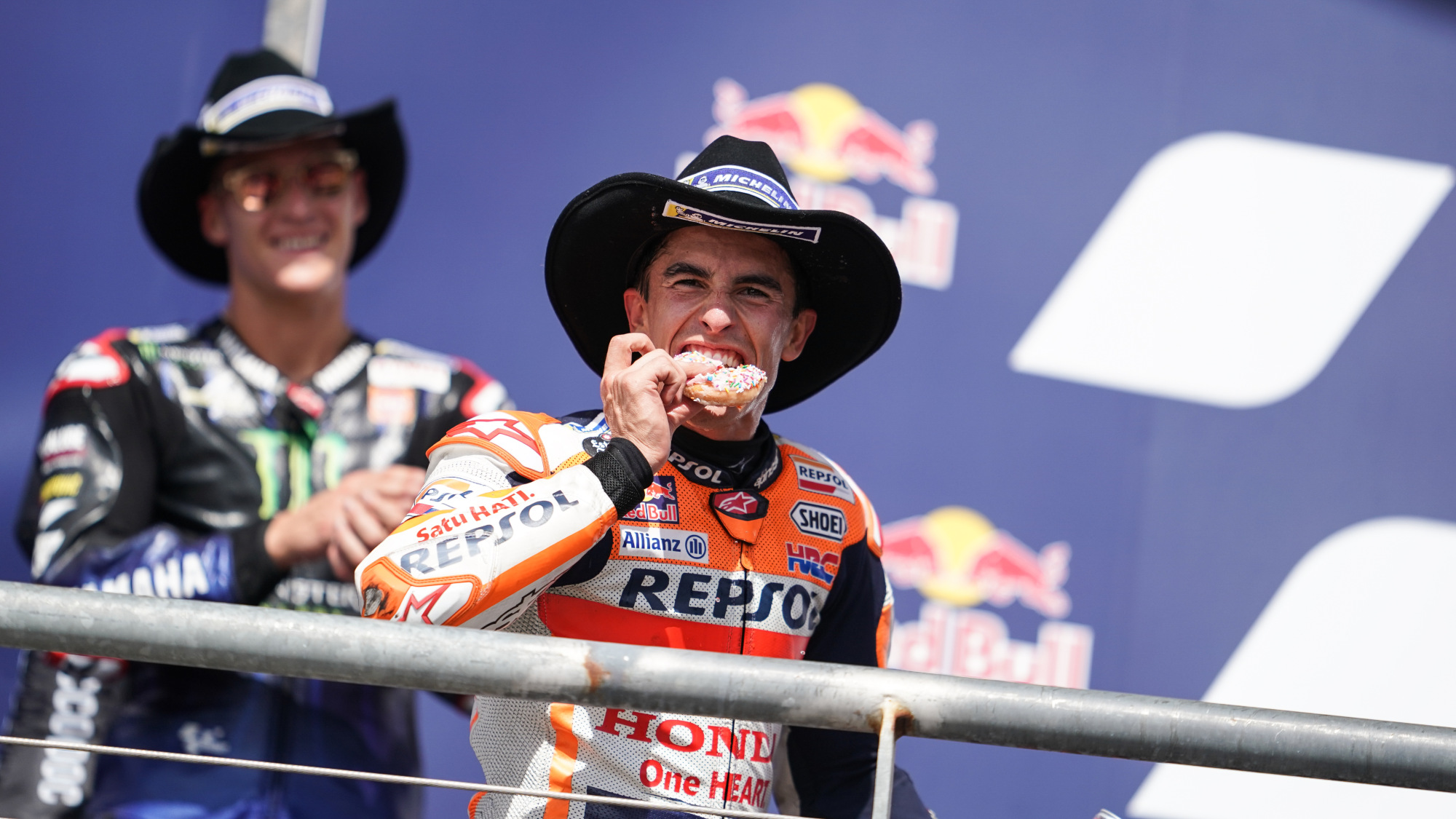 Márquez bites into a donut on the podium, honouring a pre-race bet

Also, Márquez has yet to fully figure out Michelin’s latest rear slick. The softer-construction rear was introduced at the start of last year, so he’s effectively one season behind his rivals in understanding the tyre that changed MotoGP a lot.

“I cannot find the full potential of the new tyre,” he added. “The tyre didn’t drop, so I had more or less the same grip with the old tyre as will the new tyre. For that reason I kept a very constant pace during the race. But that’s not the way to be fast – I prefer to have the initial grip and then manage.”

Finally, of course, his right arm and shoulder still aren’t at 100%. During the weekend he commented that they are usually between 60 and 80%, never more, so he can’t attack right-handers in his usual style because he knows he can’t save a front slide with his right elbow.

And Márquez likes Honda’s latest and hugely revamped RC213V, which he tried for the first time at Misano, a week before he headed to COTA.

“The most important thing is that we know what’s going on, because to improve the problem first you need to know the situation you are in. It seems like we know what we are doing and Honda has brought something that improved rear grip quite a lot in the test. Of course we faced other problems, but it’s a new bike so that’s normal. But, yeah, the bike was better.”

During the first few laps he came under serious pressure from Pramac Ducati’s Jorge Martin, which is just what he didn’t want, because if he got mixed up with the Ducatis he might’ve been in trouble.

“My only solution to try to have a better race was to push,” he said. “I pushed but all weekend I didn’t have Marc’s pace, especially with used tyres. In the end, we achieved our main goal, which was to finish on the podium.

“It’s the best second place of my career, because before the start I was feeling a bit more stressed, but when you start the race the stress goes. I did a really good race and I’m really happy because Pecco was super-strong during the last two races, where he scored 50 points.” 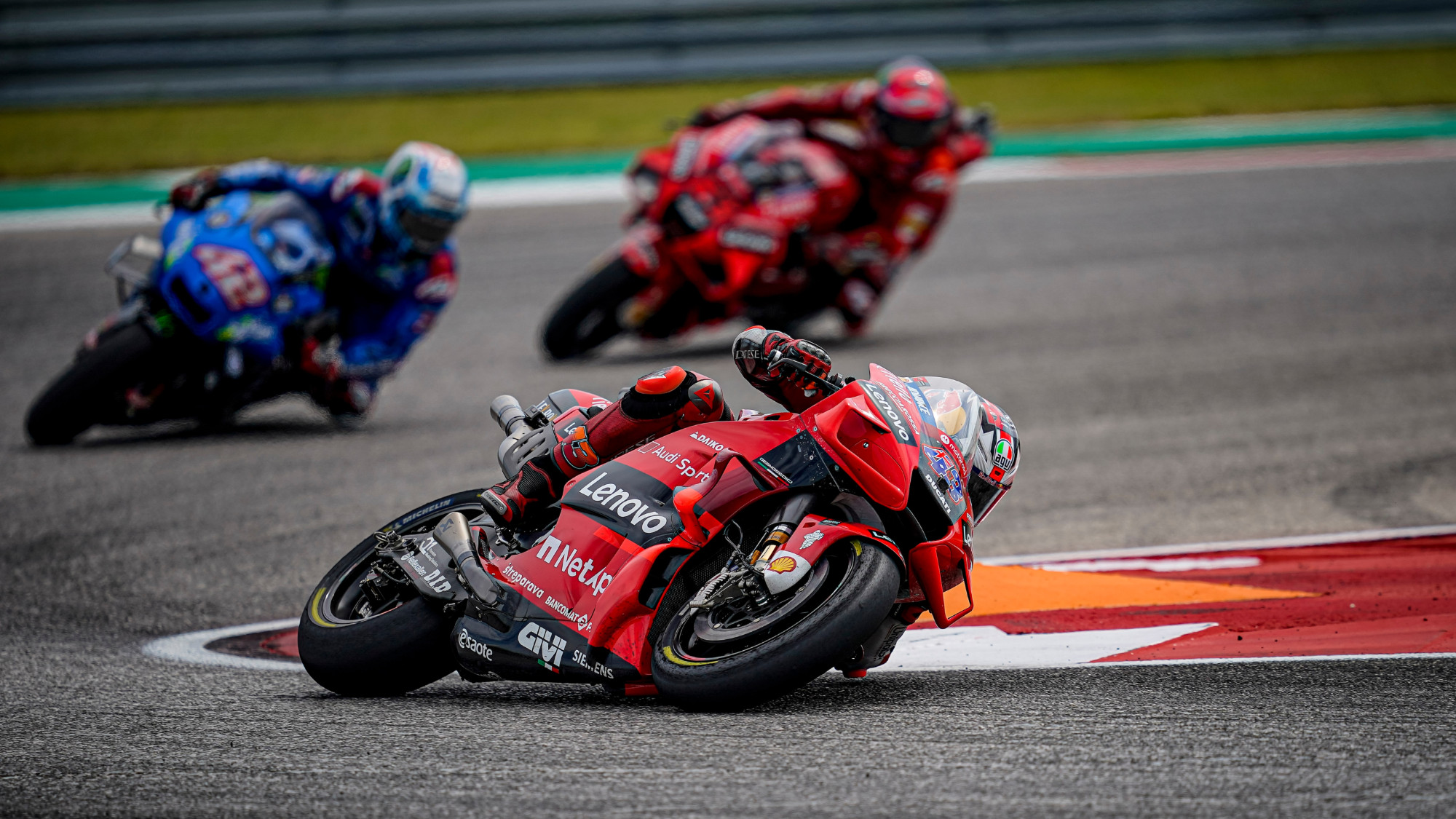 Bagnaia’s back-to-back victories at Aragon and Misano had closed the gap between the pair from 70 points to 48, with four races remaining. A tall order for the Ducati rider, but far from impossible if he kept outscoring Quartararo at the same rate.

Bagnaia started from pole position for the third race in a row, but it took him too long to get his rear tyre up to temperature, so when Márquez took off he was already three seconds down.

“So I just tried to manage well the first part of the race,” he said. “I saw that some riders, like Marc and Fabio, were fast and others were pushing a bit too much with the rear tyre. So, I said, just wait a bit: try to set your pace, because at the start, with riders in front of you, it’s more difficult to brake where you want.

“When I saw other riders were starting to struggle I bettered my pace. I wasn’t fast like Marc or Fabio, but I saw that the podium was there. I have to say thanks to Jack [Miller, his Ducati team-mate] who let me pass. He was struggling a bit, but he did great teamwork.” 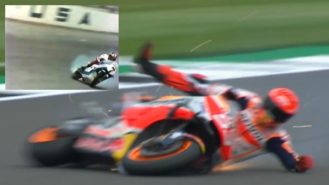 Marc Márquez walked away from his 170mph tumble at Silverstone, while Barry Sheene spent weeks in hospital after his 170mph accident at Daytona in 1975. The big difference? Huge advances in riding kit

Many had Miller down as race favourite, thanks to his pace during free practice, but his Q2 went awry and he had to start from the fourth row. Fighting through the pack over-stressed his front tyre and that was that.

“I had to push the front end to create some passes – sending it in from a long way back,” said the Aussie, who chased a podium but finished seventh. “Plus I was copping heat off the other bikes, it was warm out there.”

Miller hoped his choice of the hard rear – he was the only rider to go for that option – would give him the upper hand in the second half of the race. But it’s not much good having good rear grip if you haven’t got front grip.

“I was trying different styles to get load off the front tyre. I was struggling at the end, then Pecco arrived behind me. I didn’t want to f**k him up too much.”

Álex Rins, who won last time out at COTA in 2019, finished 2.5 seconds behind Bagnaia and just ahead of rookie Martin, who once again impressed mightily. And Martin, in turn, finished 1.5 seconds ahead of fellow MotoGP apprentice and Misano podium finisher Enea Bastianini, once again doing amazing things on his 2019 Desmosedici.

Ducati currently has an embarrassment of riches in rider talent.

The final lap showdown between Miller, world champion Joan Mir and Bastianini came to a head at Turn 15, where Mir barged into Miller, allowing Bastianini to take them both and finish sixth. Mir was later demoted one place, from seventh to eighth and behind Miller.

Miller and Mir have swapped a lot of red and blue paint this year.

“I was on my last lap, as I was at Misano, and once again I got hit out and got passed by two guys,” said Miller. “Race Direction did what they did. It’s a recurring incident, I couldn’t do anything about it. I was protecting my line because I was struggling with my front tyre.”

Misano next, where Márquez will once again struggle through the fast right-handers, then Portimao, where Quartararo is most likely to wrap up the title.