For the past nine months MotoGP has been like the boxing ring without Muhammad Ali, the football pitch without Pelé and the Formula 1 grid without Ayrton Senna.

Pretty much every year MotoGP lap records get broken, but not last season, because the fastest man on the grid wasn’t around to push deep into the unknown.

Now finally Marc Márquez is back, after three operations and many moments when it seemed like his career might be over.

During the 34 years I’ve worked in MotoGP I long ago realised it’s pointless to use my own mentality to judge what pro-riders can achieve in the face of adversity, because I know not what happens inside their heads when they get hurt.

When I raced a zillion years ago I grew to dislike pain. And when I got hurt I allowed my mind to focus on what I’d done wrong and somehow hope to turn back time, so I could avoid that millisecond of an error and keep riding around racetracks, rather than writhing around at home.

My desire to race again faded with every fracture and concussion. Do I really want to be doing this? Because it’s not just the physical pain, it’s the lying in hospital for weeks, bored out of your brain, missing your friends and your girlfriend, then more weeks hobbling around on crutches, watching everyone enjoying their arms and legs. You lucky bastards!

Pro-racers aren’t like that. They’ve already factored in the fractures, the pain, the suffering and the days and weeks in hospitals that are entirely unavoidable in their line of business. So when they get hurt, however badly, it’s no big deal. They knew it was going to happen, so they don’t mope around, trying to turn back time. They never look back; they only look forward.

When riders transform their bravery into a great result they are hailed as heroes. When those heroics go awry they are called reckless, impetuous, foolhardy. The line between the two is as thin as your scaphoid bone.

Márquez has been called both heroic and foolhardy. Which will it be this time?

Nine months is a long time without racing a motorcycle, but he has been here before. Somewhere worse, in fact. At the end of 2011, Márquez had a huge crash at Sepang – not his fault – and hit the ground so hard he saw double, for months. This wasn’t just a bad dose of concussion, the impact was so heavy it stretched the muscles in his right eye.

The trochlear nerve had been damaged, causing serious vision problems. The eye didn’t improve and medical experts were unsure if it would. Finally, Márquez underwent eye surgery. Under a local anaesthetic. Even then it wasn’t certain he would be able to start pre-season testing in February. 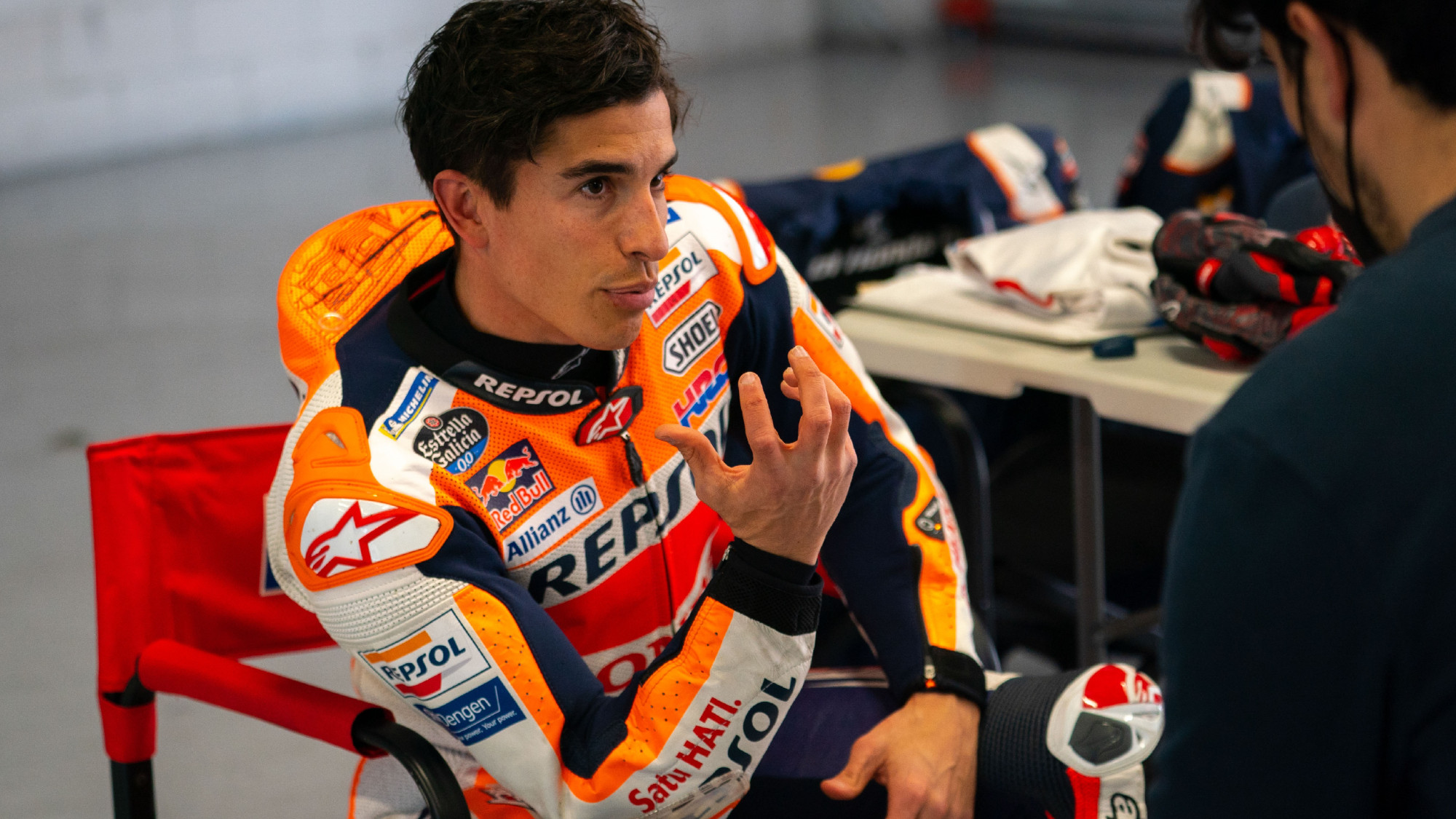 Márquez debriefing during his one-day test at Barcelona

Injuries like that are scary because they can be life-changing and that’s the only kind of injury that scares most racers – something that will blight you for the rest of your life. Luckily the operation was a success and Márquez didn’t look back. Only forward.

In the eight seasons since then he’s won seven world championships and had a lot of crashes – more than 130 in race weekends alone.

That’s why some say it was inevitable that Márquez would get hurt badly, but racing doesn’t work like that. Kevin Schwantz crashed many, many times more than arch-rival Wayne Rainey but it was Rainey who ended up in a wheelchair.

When you crash heavily you are entirely in the lap of lady luck. Some riders try to protect themselves when they cartwheel through the gravel trap, but there’s one thing they can never control: the orbit of their flying motorcycle. 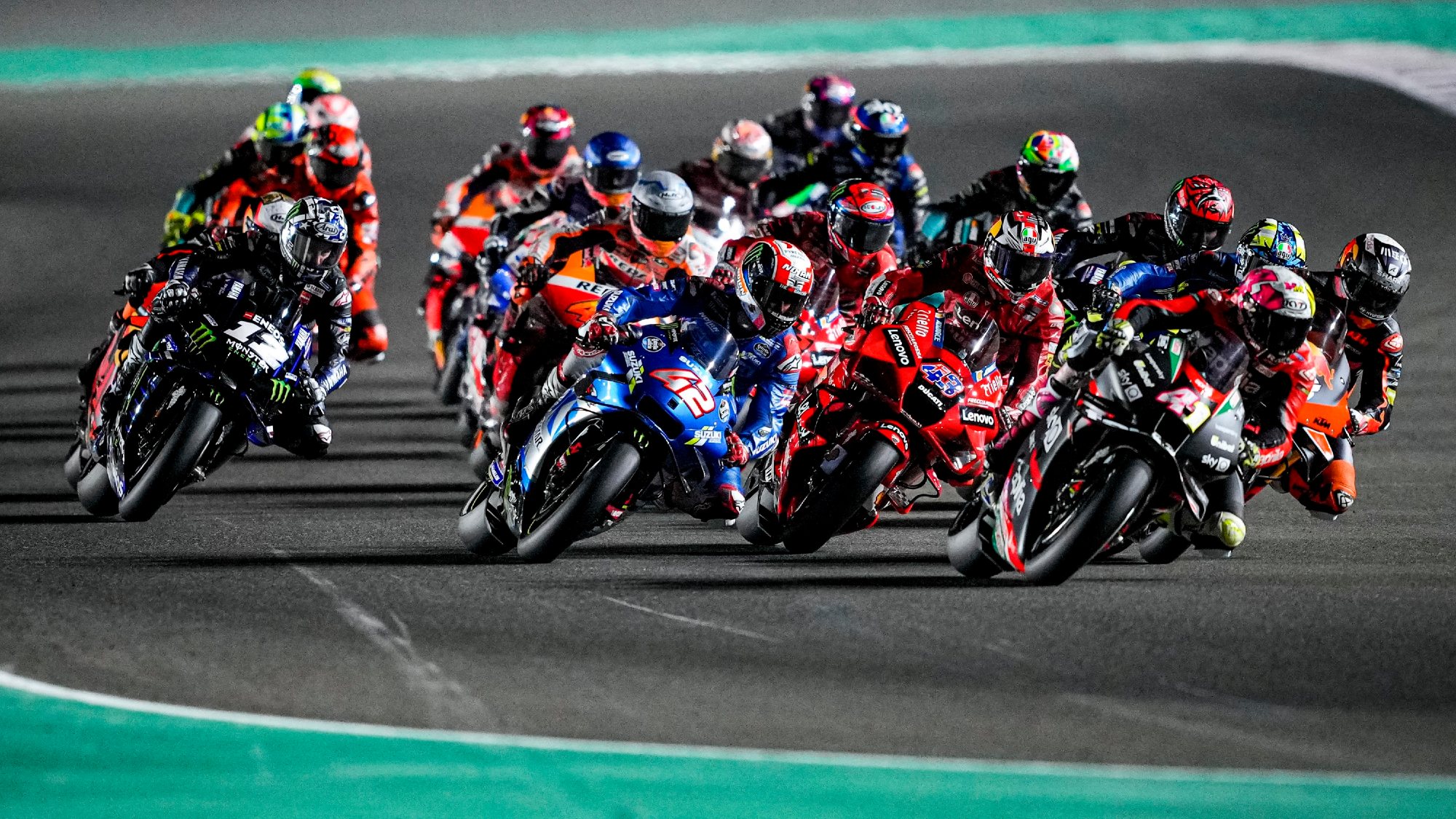 At Jerez last July it was Márquez’s misfortune to be struck by his RC213V’s front tyre when he crashed in the closing stages of the season-opener. (This was the supreme irony: to be struck down by the very thing that made him so unbeatable.) Otherwise, he would’ve hobbled away and most likely cantered to a seventh MotoGP title in eight years.

The humerus bone is not a common bone to break in motorcycle racing – usually it’s the lower arm, wrist and hand that take the brunt of a crash.

Four-times World Superbike champion Carl Fogarty ended his career at Phillip Island in 1999 when he fractured the top of his left humerus. The injury was plated and screwed, but that didn’t fix it. He tried riding a few months later and immediately understood that the game was up.

“I was 1% of the guy I had been,” he said at the time. “I couldn’t even get down behind the bubble, change direction or hang off the bike in the corners. It confirmed everything that my specialist had said – the arm would no longer be able to take the constant pounding.”

Márquez’s arm is in better shape than Fogarty’s, so can he win a seventh MotoGP championship this year?

I’m not into making predictions – motorcycle racing is too weird a sport for any of that – but it’s certainly possible. Of course, there are doubts – can the fracture site resist 40 minutes of flat-out riding on a MotoGP bike?

Portimao should answer that question. There is no such thing as an easy track on a MotoGP bike, but the Portuguese circuit’s Turn One – where riders plunge down a steep descent at the end of the 217mph/350km/h start/finish straight – probably creates the biggest g-forces that any bike racer will experience (without actually crashing). 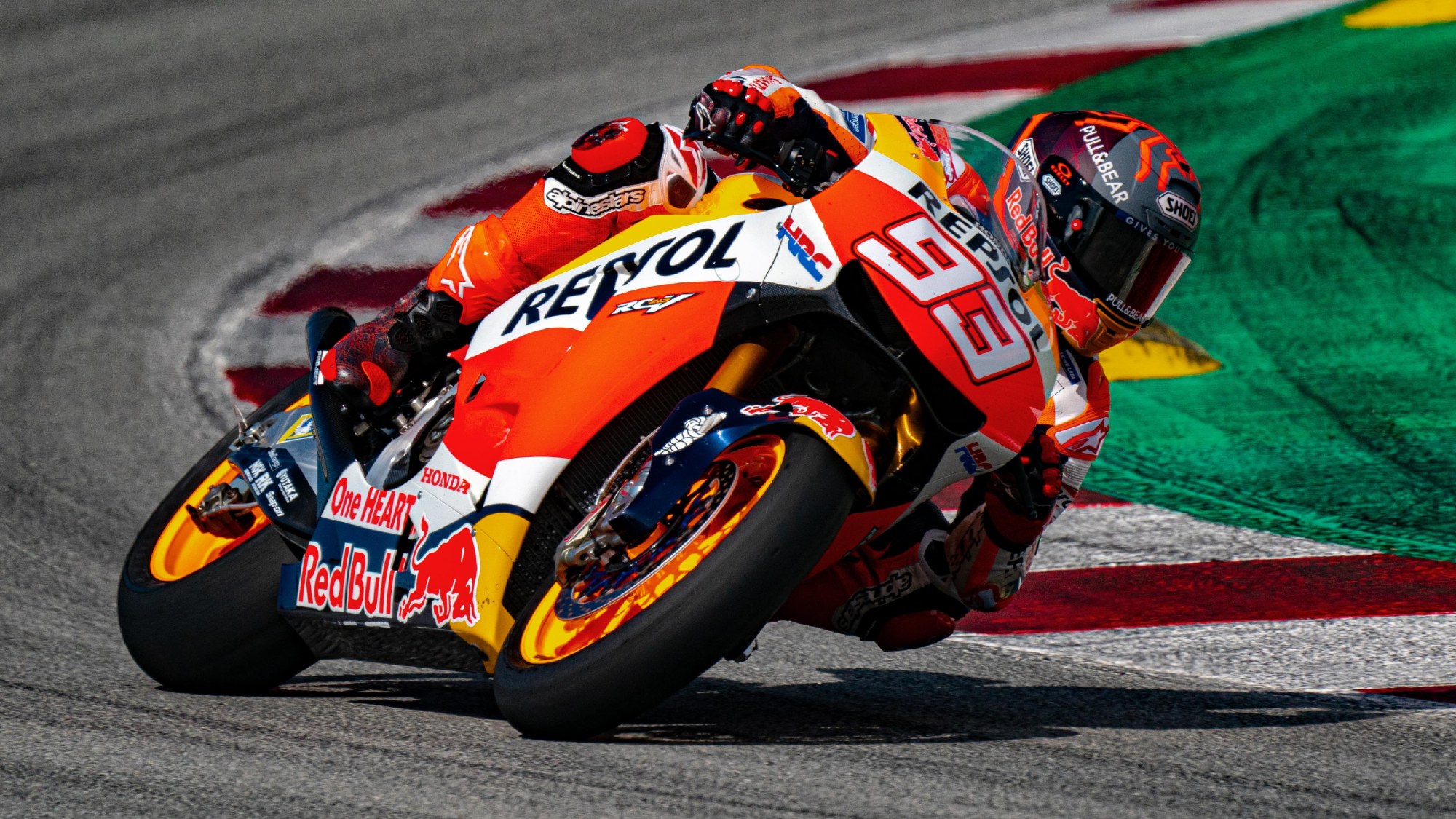 Each time Márquez brakes into Turn One he will reach at least 1.7g, which means carrying something like 120kg through his arms and wrists. He already knows that because he tested there last month, albeit with a Honda RC213V-S streetbike, without carbon brakes.

Márquez gambled with his arm last year, lost the bet and learned that he’s only human. And if he checks the numbers he will see that he doesn’t need to start winning right away to win the 2021 championship.

Márquez took the 2019 MotoGP title on 420 points. This was the greatest premier-class campaign in the history of grand prix racing: 12 wins and six second places from 19 races at a time when the bikes have never been closer and the tyres never trickier.

If we extrapolate Joan Mir’s 2020 title-winning points score into a 19-race season like Márquez’s 2019 championship he would’ve scored 232 points, 188 less than Márquez. 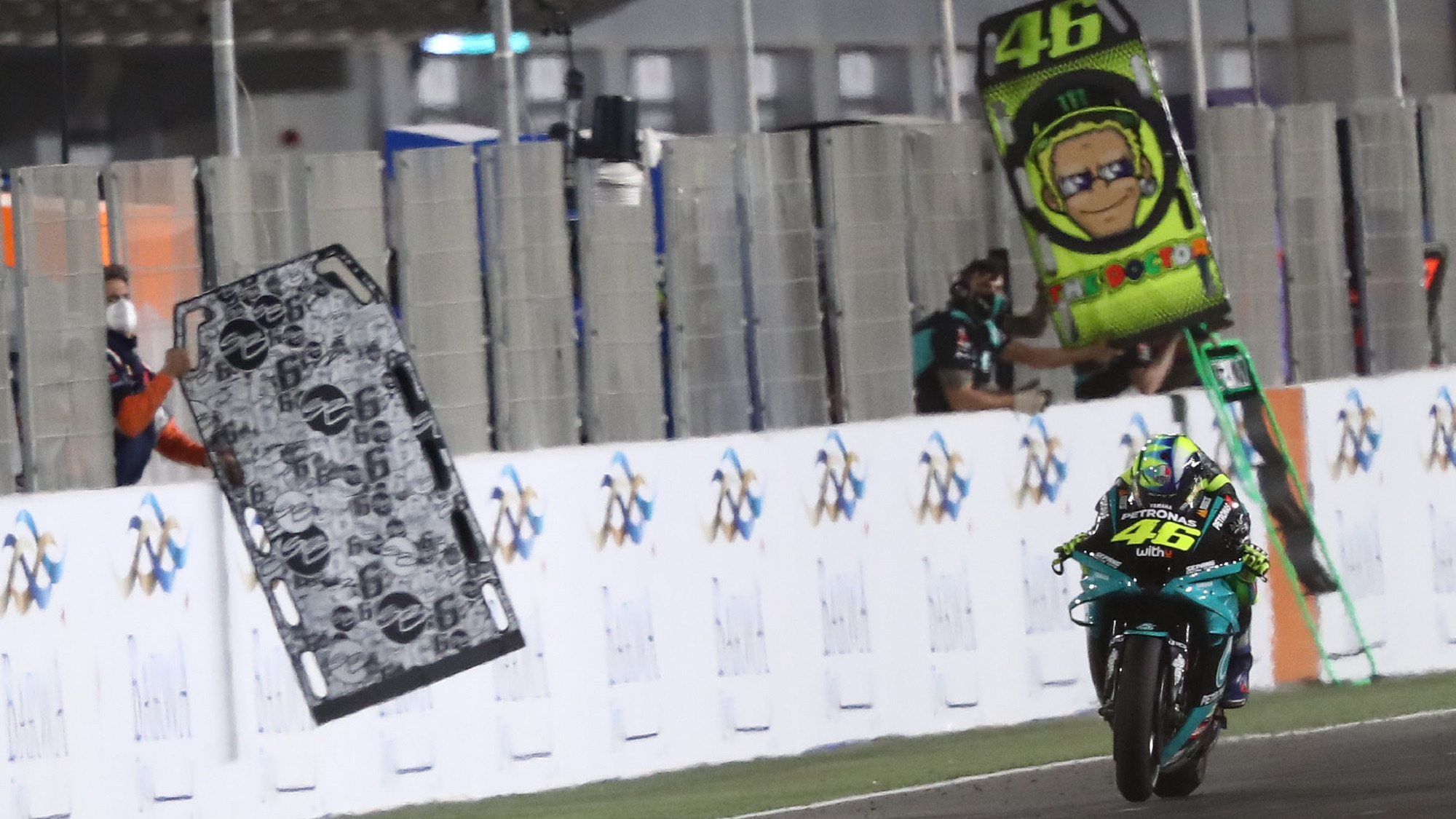 Mir’s title-winning points score was low, but it wasn’t much different to the points Andrea Dovizioso amassed to finish second to Márquez in the 2017, 2018 and 2019 championships.

All this tells us that Márquez has quite a margin to play with. Obviously, 2021 isn’t 2019 but nothing much has changed since he won his last crown, because no one broke any lap records, despite back-to-back races at several tracks. And even if he scores 40% fewer points than he did in 2019 he would still win the championship, assuming his rivals remain at roughly the same level they were at last year, which seems likely.

If his right humerus holds firm I believe he has every chance of winning the title. So do many people in the know.

“With Marc everything is on another planet,” says Repsol Honda team manager Alberto Puig. “When he puts on his helmet and goes out on track you know something is going to happen, something special.”

“There’s a big difference between riding a streetbike and pushing on the razor’s edge for 20 [laps] with 22 other guys around you,” says the Australian.

What can Márquez do this weekend? There are three things to consider in answering this question.

Márquez tested at Portimao last month, so he knows the track. Last November HRC test rider Stefan Bradl rode Márquez’s RC213V to seventh in the Portuguese GP, 15 seconds behind the winner, his best result of the year. And Bradl says he wouldn’t be surprised if Márquez finishes on the podium this Sunday.