What an interesting weekend it was, a lot of twists and turns to the drama.

The track is bumpier than it was a few years ago and if you look at the lap times they are almost two seconds slower in qualifying. That comes down to the track conditions, but also the Bridgestone tyres. I think they were a little faster and a little easier to push to that edge; maybe they were more forgiving in many ways. The single ECU has also affected the riders’ ability to adjust that for their ‘bike. For sure the Honda has been affected the most.

The differing fortunes of the Hondas

What a difficult and terrible weekend it was for Marc Márquez and Dani Pedrosa. Let’s talk about Marc first. He goes out and I think he’s feeling the pressure and consistency that Maverick has shown, winning the first race. He felt he needed to win and he made a mistake. Certainly there were front tyre issues – they haven’t run that hard a tyre on the Honda, but I think it’s more than that. He’s feeling a bit of pressure and none of us are immune to that, no matter what level the rider is. That can certainly happen. It’s going to be interesting to see, going into a track like Austin, Texas where he has dominated, whether he is going to rise up. Of course, he needs to win, but if not he needs to finish near Maverick and not let him get too far ahead. It was unfortunate for Dani to have that same crash at the same corner as Marc.

Cal Crutchlow represented Honda well, though. He worked around the problem, kept his head, didn’t make any mistakes and was running second until late on in the race.

What’s going on at Ducati?

It was certainly beyond disappointing for Jorge Lorenzo. His crash, so early in the race, came partly from being so far back in qualifying. If you look at the situation that Ducati is in and look at the 2015 and ‘16 ‘bikes and how well they are performing… Then there was Danilo Petrucci this weekend on the 2017 and he was running quicker and more consistently than factory riders Andrea Dovizioso and Jorge on the same motorcycle. I don’t know what’s happening there, we will see more as the season goes on. Ducati is struggling with the latest ‘bike while the older ones seem to be doing OK with the satellite teams. 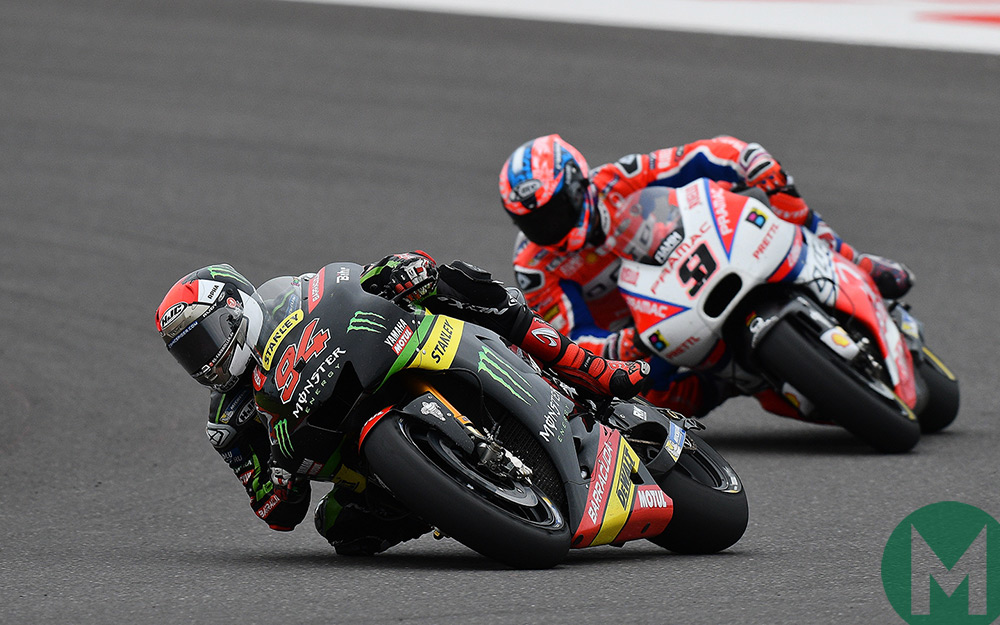 It’s been a good run for the Yamaha team. Johann Zarco and Jonas Folger are going well on the Tech 3 bikes – they’ve done a great job in the first two races on a ‘bike that is a year old. I think it shows where the level of performance and improvement on these newer bikes is at: apart from Viñales, the 2016 Yamaha is doing almost as well as its current machine. It’s good to see the rookies doing such a good job.

Valentino Rossi and Viñales are obviously at the top of the list. What can you say? Viñales seems to get stronger and stronger each week and what’s really impressive, as I’ve said before, is the way he manages the race. He won the two opening races in a similar way: in the first one he was patient and let the race come to him, in the second one he did the same. He was running second, pushing Marc along who then made a mistake, he took over at the front and maintained that lead.

It seems so easy for him, which is what happens when you have the ‘clear thinking’ and you’re on top of your game. He also seems so comfortable with the Yamaha. Then of course there’s Valentino Rossi who saved the best performance for Sunday afternoon, as he so often does. He put some pressure on Cal, waited for his chance and made his pass for second place.

Michelin is talking about bringing a fourth tyre, the only thing they didn’t run on Saturday, which is going to have a harder construction at the front with a new profile. That is going to be interesting because the requirement – and we’ll have to wait and see with this – is to have three fronts and three rears for a race weekend, not four. The new construction front was brought along because Valentino was struggling, but some of the other riders after Qatar talked about the front being too soft for them too. With a stiffer construction front will that bring the Hondas back into the fold. Will it help Valentino? What will it do to the rest of the field? It should be interesting as we go to the third race. Can Marc bring the battle to Viñales as everyone is hoping?

I am looking forward to it, hopefully you are too.