Freddie Spencer discusses the big talking points from the Dutch TT, where Valentino Rossi showed his champion class and Spencer explains how MotoGP is a game of anticipation and judgement.

The cathedral of motor sport – one of the great tracks from a long time ago that is purely motorcycle driven. It’s been changed over the years; it’s been shortened since the heyday, in fact even since I raced there, but it’s still an incredible circuit and it’s very challenging for the riders and machines. This weekend showed the incredible racing that we have in MotoGP today.

I want to digress a little bit. When I was in my 20s I had the great opportunity to go and watch a great basketball player play live and in person. His name was Larry Bird, who played for my favourite team when I was a kid: the Boston Celtics. In fact his team-mate on that team was the centre Robert Parish, who was from Shreveport Louisiana, so there was a little bit of a connection there.

I’d always been amazed watching Larry Bird play. He was about 6’8″ tall and he played power forward and his gift was his technique. You could see that with the way he played, his ability to get the ball and the shot off. He wasn’t the fastest player, he certainly couldn’t jump that high, but I was really impressed when I watched him play. He was from French Lick, Indiana and I realised that his greatest gift, apart from really understanding how to play the game, was his anticipation. Not just anticipation of what he needed to do and his reaction, but being able to use that anticipation to know exactly what the other player was going to do, sometimes before even they knew it. Just anticipating their movement; that’s an important thing to be a great athlete. It’s not just ability, but how you utilise that ability.

Going to this weekend in Assen we knew of course that the championship had been really changed this year with Dovi’s abilities and what he’s done over the last two years. He’s talked about his mindset, as I have talked about previously, but this week I want to talk about anticipation, that ability to be able to understand exactly what you need to do at the right time.

First of all, Cal Crutchlow. Cal – congratulations, he got a new contract with HRC, something that he’s been wanting for a long time. I think Cal is one of those riders who gets the most out of his ability and lets not forget, he’s had podiums and great race results for three different manufacturers – on Yamaha, Ducati and on a Honda. Signing this new HRC contract after his two wins last year is something he certainly deserved.

Cal said a very important and interesting thing after the race, which is something that I understand so well. You noticed as the rain started falling that he picked up the pace and was able to get up front in the battle with Marc for that last podium position. Why was he able to do that? Because on the dry parts of the track he kept the tyre temperatures up and he utilised that speed, which is something I did all the time. Take risks in an area where you know you can get the most advantage and don’t look at the whole circuit as wet, but understand each part of it and really pay attention to it. Cal does that very well, it’s one reason why he’s so good in adverse conditions.

Johann Zarco – we obviously know he has a great amount of ability, he’s a two-time Moto2 world champion. But remember that incident that he had with Valentino earlier in the year, when he had that close pass and he reacted? He seems to be driven in those situations more by emotion than by judgement. That pass he tried to make on Valentino in that race was way over the line in terms of risk. There was no way it was going to happen; he put himself at risk but even more importantly, everyone else. Valentino talked about it afterwards – there was no way it was going to happen.

It’s judgement. It will be interesting to see as it goes along if he has that ability to make good judgement and to anticipate, not just of what he is doing but what everyone else is doing. You’d expect a world champion of his level from Moto2 to be able to understand that, but maybe in the end he was just caught up in the moment and he’s not really thinking it through.

Another example: Marc Márquez. In ’13, he had a lot of crashes on his way to winning the championship that year and it certainly affected him after he won the championship in ’14 and then in that battle with Valentino. He made those judgements early in the season in those couple of races with Valentino and they really weren’t the smartest things to do, but he learnt from them and maybe Johann Zarco can do the same. Don’t go out there and say things or think things or think you can pull things off that you really shouldn’t. It’s not about that, it’s about managing risk. 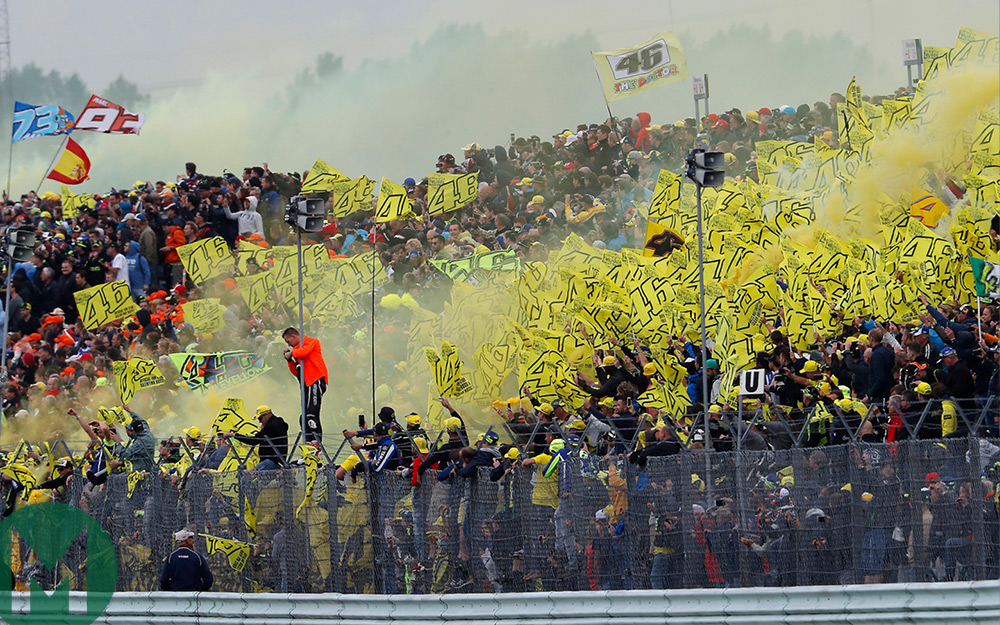 Ride of a champion

Now, Valentino Rossi. What a great ride for the champion and he’s a perfect example of a great champion. This is why. It’s not only his ability to be able to maximise what he can do, his ability to anticipate and to have good judgement pretty much all the time, but also to recognise what other riders can do. He maximises his strengths, but he also uses the weaknesses of others against them. Remember what I said about recognising what other athletes can do in those situations? That’s the key that can make a great champion and it’s one of the reasons why Valentino has been so successful all these years.

You saw late in the race, his strength is his ability to be able to be late on the brakes. You could see that when Petrucci made that pass on him with a lap to go, Valentino charged right back. That’s a little bit different obviously to what happened with Maverick Viñales at Le Mans, where he made that mistake and Maverick got past, then he tried to stay up and make that pass but it didn’t work out for him. This was completely different.

Valentino had a great win and you also have to give a good ride to Petrucci, who has really picked it up later in the year. Maverick Viñales made the mistake that was really brought on by the bad qualifying position. I think he also felt the pressure; he talked about it going into the weekend that he needed to win to maintain the points lead.

It’s certainly made for an exciting championship; it’s one of the closest we have ever seen. We have different age varieties, with Valentino on one hand and Viñales and Marc and the young riders on the other, and the others in between like Crutchlow keeping things interesting. I’m really looking forward to this championship. I think the bikes are pretty much even now in many respects, it’s good to see the Ducati up there as it is. Hopefully Jorge will pick it up, it’s really difficult to watch his struggles. We’ll have to see if he’s able to get a hold of what he needs to do and work around his issues. I think a lot of it is the way he thinks about it. He gets a little upset and a bit down. We’ll see if he can pick it up.

It’s certainly going to be a great championship, I’m looking forward to the next race, hopefully you are too.