Three-time world champion Freddie Spencer considers the best of the 2017 MotoGP of the Americas, including Valentino Rossi’s penalty and how he’s come to lead the championship, what’s changed for Maverick Viñales and the effect the circuit had on the race.

The US Grand Prix is one of my favourite events. Growing up as a kid, I could only imagine that one day there’d be a Grand Prix in my country and that some day I’d get to race in one, and obviously I did. So it’s great that it’s at a facility like Austin, which is near my home in Shreveport, Louisiana.

The race track itself looks beautiful, but it’s surprising that it’s degradated so quickly over these five years. If you look at what the riders went through this weekend you really wouldn’t want to have to race a Grand Prix bike, especially a MotoGP bike or, in the older days, a 500 around a track that was so bumpy and inconsistent. The guys talked about that and it made their weekend very challenging. But it was the same for everyone as my dad used to say and the riders had to get used to it.

If you look at the weather conditions from Friday to Saturday, on Friday the track temperature was around 42deg C. On Saturday morning it was a lot cooler and we saw a lot of crashes. I think it was a combination of things, including the track condition – it was inconsistent and very bumpy which affected the bikes in the corners. The bumps affect not only the stability but the contact patch, which was causing a lot of the problems, particularly on corner entry.

A lot of those bumps are caused by the cars. They run a lot of sports cars there, of course they have the Formula 1 race and a lot of manufacturers go there. On the entry to the corners there’s these stutter bumps. The riders go in on the brakes, the bike is loaded, they tilt the bike in, they misjudge it just a little bit and hit the bumps wrong which unloads the front and they crash. 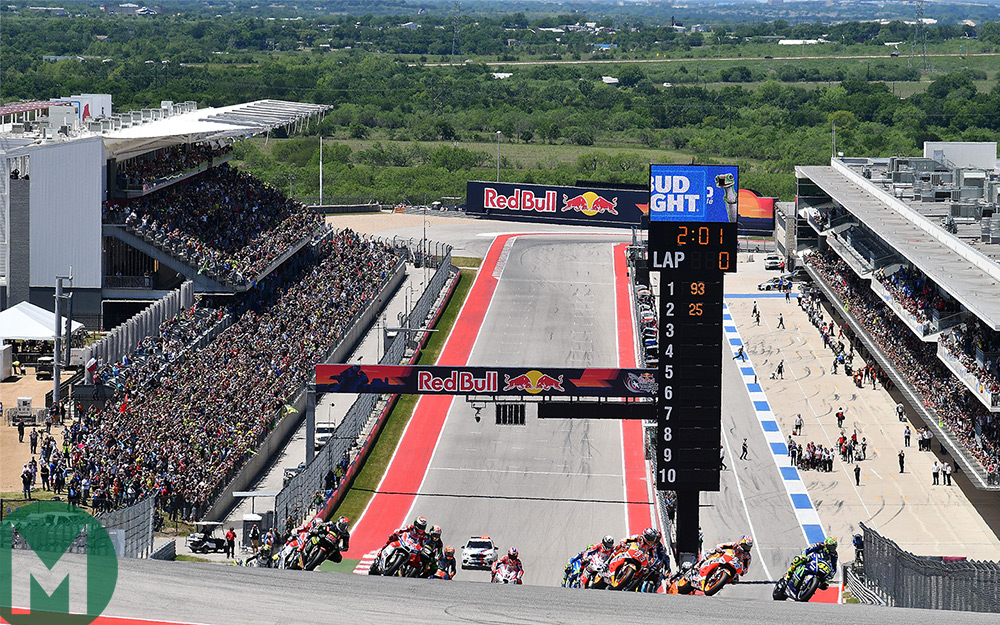 It’s a combination of things that cause that, also the Michelin tyres and how they’re working. There’s been a lot of talk this season about that soft construction. I’ve talked about how it’s probably affected Valentino a little bit, but it seems he’s got that working the right way and has adjusted the bike to deal with it. The Michelin tyres seem to be very sensitive to the temperature, but also there’s not a great deal of difference between the soft/medium/hard.

There seems to be more difference in how the bikes react to them. You have the Hondas on the hard, whereas most of the riders where running the mediums and even some on the softs. I think a number of factors were causing those crashes, especially those crashes on Saturday morning.

Marc Márquez had those two crashes on Saturday morning. He did talk about how he needed to go back to that mindset like he had last year. Remember in 2016 he settled down compared to what he was doing in ’15 and all of those problems that he had with Valentino in the beginning of the year came to a head later on as the year went on. He really was pushing too much.

He’s always crashed a lot, even in ’13 he crashed pretty much at each race in practice – not in the race – en route to that first world championship. That’s not uncommon for him, but he can’t afford to make those mistakes in the race. So he said he wanted to go back to that mind-set like he had last year and we saw that in qualifying, where he kind of let the qualifying session come to him. Maverick put in that quick lap and then he came out on that very last lap and put in his lap to get pole position. I think that’s a turning point for him, which is really a positive. 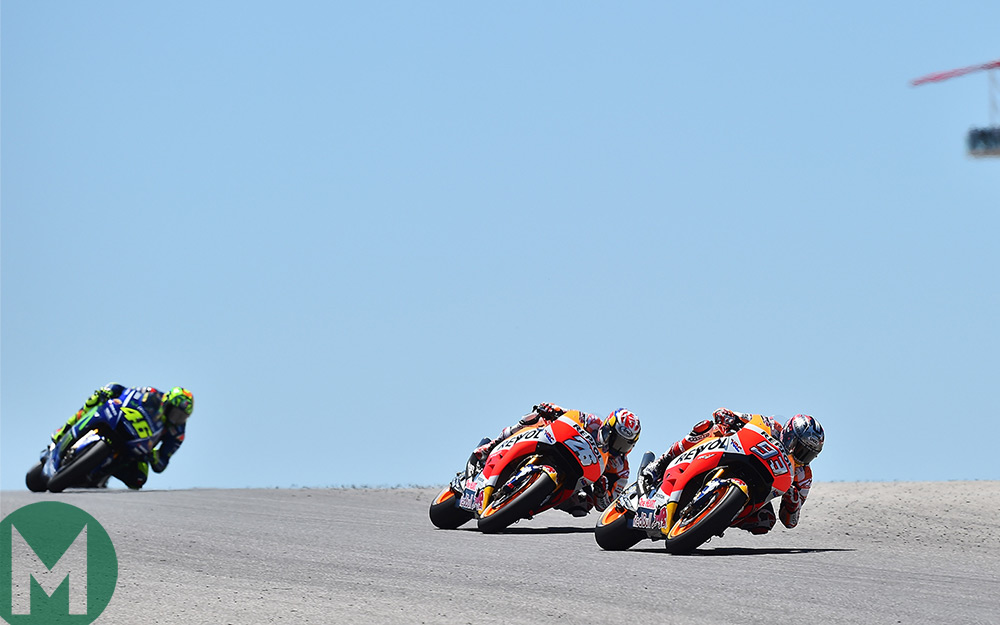 Now, Maverick Viñales. That incident that he had with Valentino on Friday in practice, I really didn’t understand that and I don’t think Valentino knew what that was about. He said that after qualifying. He didn’t see anything, he didn’t know what his issue was. I think Maverick might just be starting to feel the pressure a little bit. We saw that in that reaction and maybe that contributed a little bit to what happened in the race on Sunday.

We don’t know, because there were a lot of crashes anyway, but it certainly did change things for him and I think we’re seeing a little bit of that pressure and expectation of winning three races in a row. I’ve been there before myself and those points where you make mistakes, you get them out the way and then it can lead to more positives. We’ll see what happens when we get to Jerez.

What a great start for Dani Pedrosa in the race, to get up front which he does pretty well. If he can get a good start and get in that lead group, he pretty much stays there and that’s got to be a great confidence boost for him. For him and Marc, the two Hondas up front with all the issues they’ve had this year with no one finishing on the podium in the first two races, to finish in first and third was great.

That incident Johann Zarco had in the race with Valentino, there’s nothing Valentino could do, he didn’t even see Johann when he turned in. If Johann is going to make that pass in the future, and Valentino kind of hinted at this, make it and get by so he knows you’re there, because these bikes at their speed and at the very elite level, you need to be a little more precise with that move. That should be a good lesson for him.

Why did the three-tenths-of-a-second penalty for Valentino happen? Well, you can speculate. I have the feeling that when they watched the video when Valentino made the evasive move, he didn’t get out of the throttle, he accelerated through and got a little bit of a jump. There was really nothing he could do, and I think that’s why they penalised him. If he lifted the bike up and rolled off to the try and make the right, I don’t think anything would have happened.

I don’t think they should have given him the penalty, but fortunately it didn’t matter. He beat Dani Pedrosa by more than three tenths, it would have been an issue if he would’ve lost second place because of that three-tenths penalty he shouldn’t have had. 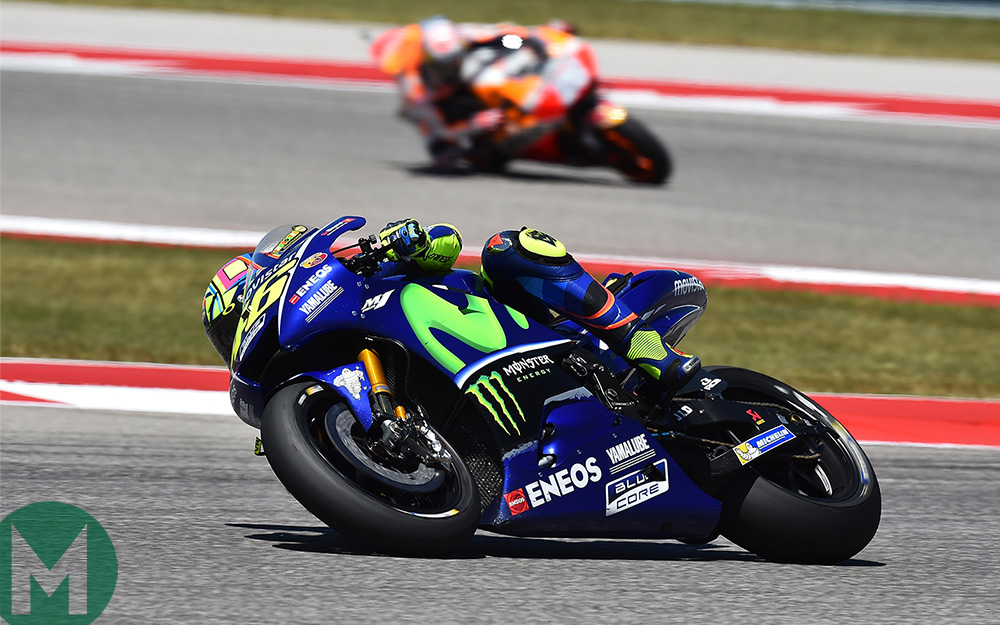 Cal Crutchlow had another good ride. The Hondas are very consistent, so all three were up there and did a very good job.

Last but not least, Valentino Rossi. Who would have thought with all the issues that he had in winter testing and free practice that you would have looked now at three races, three podiums and he’s now leading the world championship. He had that incident with Maverick, he didn’t do anything, and same thing with Zarco, he’s just doing his job. It’s great to see.

I know everybody out there is really excited to do Valentino doing that, particularly with what happened two years ago when he was leading the championship the whole way. It would be great this year because of his attitude – he’s going out there and doing a great job, strugglin,g but on the Sunday afternoons getting it done, it’s great to see.

But I think everyone was expecting to finally see a great battle between Maverick and Marc on the Sunday. It didn’t happen because of the crash. Let’s see what happens at Jerez. It will be great to see it there.