As MotoGP heads to Jerez for the first classic event of the year, the red and yellow fans will be out in force. Let’s hope for a good-natured weekend 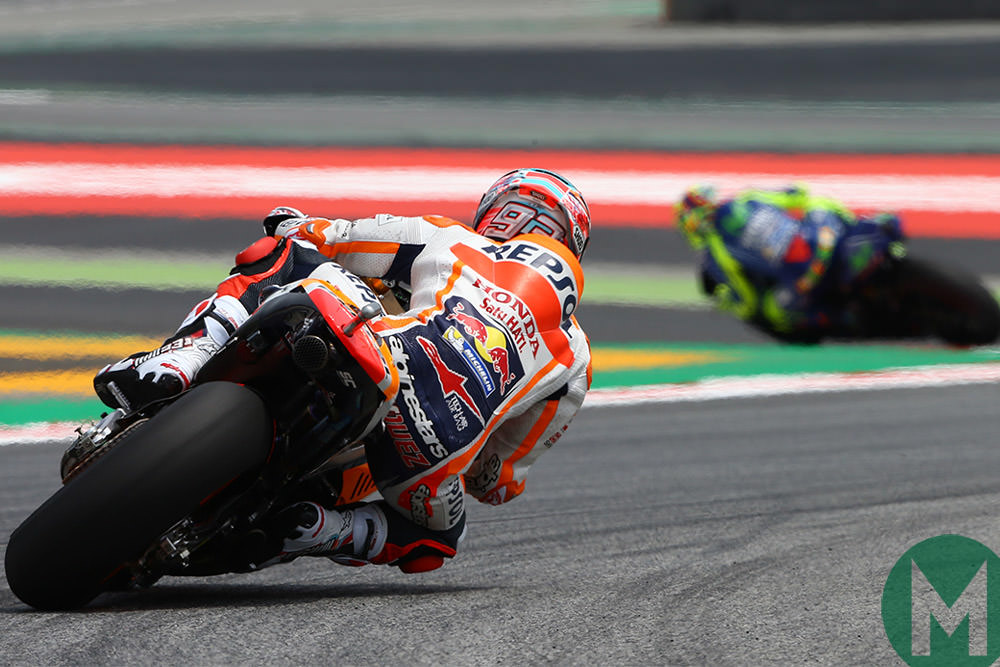 MotoGP is in a great place right now. Every other weekend we get to watch arguably the two greatest riders of all time and now we go to Jerez, where the febrile crowd sends goose-bumps down your spine.

It’s a brilliant era. I look forward to going to races now as much as I did when we rocked up to watch the Schwantz versus Rainey show, which included some great battles at Jerez, both on and off the racetrack.

Kevin Schwantz and Wayne Rainey didn’t get on, but at least their teams made sure they always had a good time after races. “We weren’t all friends but on Sunday nights everybody went out and had team dinners,” Schwantz recalls. “So the teams would end up bumping into each other and the boys would end up at the bar, having beers, telling war stories: ‘I’m gonna kick your ass next weekend!’ and ‘well, whatever, you kick my ass if you think you can!’

“Jerez was a classic example – there’s a little restaurant near the track [the Mesón la Cueva], so Honda is in there having a party, my team are downstairs eating dinner and so are Rainey’s Yamaha team, so after we go talk to the Yamaha guys and we’re saying, hey, let’s go and screw with the Honda guys. Next thing you know we’re throwing shit at them – it’s a full-on food fight, drinks being thrown, trash cans being thrown. Racing has lost that now…”

Too right. Racing has changed in so many ways in the last quarter of a century: it’s more competitive, more aggressive, more lucrative, more corporate, more everything. Some of the changes have been good, others not so good.

The only really bad development is a minority of fans booing riders: Casey Stoner, Marco Simoncelli, Jorge Lorenzo and Marc Márquez, once again at COTA last week. Twenty-five years ago Schwantz fans didn’t boo Rainey and Rainey fans didn’t boo Schwantz. Everyone gazed in wonder and went home with memories that will stay with them forever.

I just don’t get the booing. In fact, it makes me sick. And it makes the whole of pit lane sick, all the way from the Aprilia garage to the Suzuki garage. The teams work hard to put on a show and can’t wait for the race, just like the rest of us. The booing sours their weekend.

These people aren’t so much fans as fanatics. They don’t seem interested in understanding the intricacies of motorcycle racing and appreciating the world’s greatest riders bending the laws of physics. They seem more intent on venting their spleen, like angry old ladies at a low-rent wrestling match. Why not save your scorn for someone who deserves it, like a bent politician?

Márquez did wrong in Argentina and was punished. And race direction has told him that repeat offences incur higher penalties, so effectively he’s on probation for the rest of this season. Quite rightly.

However, it’s worth remembering that his Termas penalty was his first punishment for irresponsible riding/causing a crash since Aragon 2013, when he tagged Dani Pedrosa, severing his traction-control wheel-speed sensor. It’s also worth remembering that no one booed him after that incident, or indeed following his worst crime, taking out Ratthapark Wilairot in 2011.

His runaway victory at Austin was his reaction to the Termas furore. For the first time since 2014 Márquez has a bike that does what he wants it to do. He loves a battle, but I think he may give that a rest for a while and show us exactly how good he is.

You may not realise it, but you are watching MotoGP’s Ayrton Senna: a controversial racer with an otherworldly talent that has the rest of the grid slack-jawed in amazement. Even Valentino Rossi. “Márquez has the potential to be the greatest ever, better than me,” Rossi told us last year.

Rossi is incredibly special. When he’s at the height of his powers he is a poet of the racing line, who hasn’t so much advanced the technique of motorcycle racing as perfected every detail.

“If you’re behind him you’re working your balls off and he’s just easing away from you, bit by bit,” said Coin Edwards when he was Rossi’s Yamaha team-mate. “I don’t know if there’s one thing he’s got that really impresses me on the track… just everything, the whole package.”

Then the rhythm changes and the gloves come off; a bareknuckle fight, whether it’s a war of words in the media casino or a last-corner do-or-die.

I like Rossi and Márquez. They are both genuinely good to be with when they’re out of the limelight. And they are the two most intelligent riders I’ve interviewed in almost 40 years doing this job. But when they’re on the bike they are fighters, warriors.

I especially like the warriors who can do things with a motorcycle that are way beyond its intended design limits. No one does that better than Márquez – at his finest he’s not so much a poet as Jimi Hendrix playing guitar with his teeth.

And no one can slide the front tyre into a corner like he does. Yes, he falls off, but these crashes aren’t usually mistakes, they are explorations. During practice he tucks the front to get the feeling of the tyre smearing across the asphalt, so he’s ready to react to that sensation when (not if) it happens in the race.

Márquez’s COTA win puts him one premier-class victory behind Mike Hailwood and two behind Casey Stoner. Then there’s only Jorge Lorenzo, Mick Doohan, Giacomo Agostini and Rossi ahead of him.

Consistent race results are more difficult to achieve in MotoGP’s new age of unified software and Michelin tyres, but if he gets the right bike/tyre combination every weekend I wouldn’t be surprised if his COTA romp becomes a regular feature of 2018.

Then, doubt, we will hear the bovine herds booing (origin: “imitative of the lowing of oxen”) because they want to watch a good battle up front. It’s hard to please a knucklehead.

Of course, there is an answer to all this. All the other riders need do is go out and beat him. It is possible. Even at the last corner. Andrea Dovizioso did it twice last year. You just need to be very fast and very clever. Simple.