Three podiums at the first three races and none since. Rossi needs a miracle if he’s to win a 10th world title 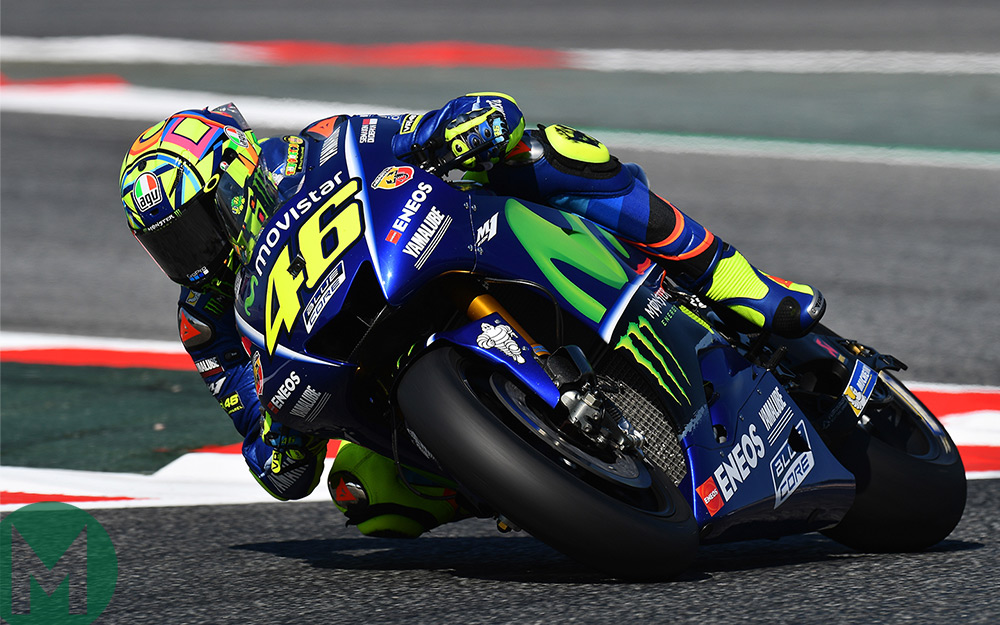 “It was strange because I won without pushing 100 per cent and this has never happened to me before… I don’t know why we won the last two races,” said Andrea Dovizioso after his second win in a week. And when a rider says something like that, you know that something strange is afoot.

Dovizioso’s favourite phrase has always been “the reality is…” and the reality of Sunday was that while the sun burned down, you could’ve been forgiven for thinking it was drizzling. The riders weren’t riding to their own limits or to the limits of their bikes, they were riding to the limit of the asphalt and the tyres.

The once-great Circuit de Barcelona-Catalunya is a horrible mess. The ancient asphalt is overused, bumpy, hellishly slippery and burns up tyres, which is why Michelin says it’s MotoGP’s most challenging track, even worse than Phillip Island. And when temperatures exceeded 50deg C during the weekend the tyres just couldn’t cope.

Dovizioso won his second consecutive race because his team worked well and because he rode well, using the Desmosedici’s superior horsepower very cleverly. He was gentle with the throttle to baby the rear tyre and he didn’t brake too aggressively to save the front tyre.

Between corner exit and corner entry he used the desmo V4’s speed to make the difference, even though he had to modulate the throttle to minimise wheelspin. He knew he would have to do this because he had so much wheelspin during practice that he was almost tailgated on the start/finish by Aleix Espargaro’s slower Aprilia.

The Desmosedici’s straightline grunt is one reason why the bike is so fast in the wet: when there’s so little grip that you can’t make up time in the corners, you really benefit from extra horsepower on the straights.

“We realised very soon that the condition of the track wasn’t so good and that rear-tyre consumption was very high,” said Dovizioso. “During practice we didn’t focus on being fastest, we focused on riding the bike with used tyres in the heat. Nobody had grip, nobody could push, because everyone had to save the tyres, a lot.”

Marc Márquez, as always, gave it his best shot, never mind his five crashes in the previous 24 hours. But he didn’t have the grip to make the difference. “What we lost on the straights we couldn’t gain in the corners because the limit was the tyres,” he said.

Rossi meanwhile struggled with all kinds of problems: his 2017 YZR-M1 doesn’t turn well, so he quickly burned up the rear tyre trying to get the bike through the corners.

“The main problem was understeer, then the problem became very big for the rear tyre,” he said. “I was in very much trouble because it was impossible to exit fast from the corners, especially the rights. I felt the lack of turning from the first time I tried this bike. Maybe the Tech 3 guys go better because the old bike turns better and stresses the rear tyre less, so at Jerez and here they were faster than us.”

The contrast with Yamaha’s 2016 YZR-M1 is remarkable. Last year’s Jerez and Catalan GPs were run in similar low-grip situations, with Rossi winning both races. This year he was 10th at Jerez and eighth at Barcelona.

So what has changed? His 2017 Movistar M1 may look the same but it is very different. Last year’s problem was lack of rear traction during the latter stages of races, so this was what Yamaha tried to fix. 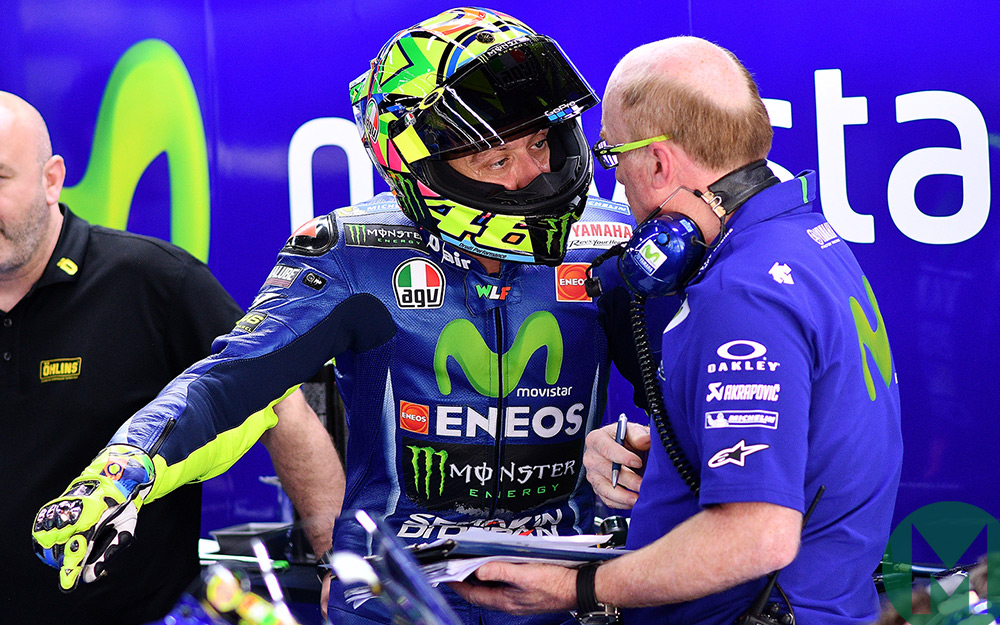 Yamaha won’t reveal the differences in spec, but they have changed the way the bike loads the front and rear tyres, trying to look after the rear during acceleration. The 2017 M1 pitches fore and aft less, but this hasn’t helped help save the tyre, it merely makes the bike struggle to find grip when there’s little available.

“The 2017 bike doesn’t 100 per cent follow Valentino’s style,” said Rossi’s crew chief Silvano Galbusera. “The way Yamaha has gone this year is very good, because Maverick [Viñales] is usually very fast, but Valentino has struggled. Last year he was fast in the first part of races but he dropped off too much.

“Yamaha hasn’t so much changed the geometry as the behaviour of the bike, the way it loads the front and the rear, into corners and out of corners. Our aim this year was to keep a good feeling like last year but without damaging the rear tyre. It’s not easy. We can find a good compromise for tyre life but then we lose some performance.”

There’s no doubt that the state of the Barcelona track was the crux of the weekend. Yamaha stayed there for an unprecedented two days of testing, cancelling a planned visit to their designated test track Aragon, to work on a solution to their low-grip woes. This seemed to make sense, except that Jerez and Catalunya will soon be resurfaced with grippy asphalt, so they will be very different racetracks in 2018.

Rossi and Viñales tried two revised frames during the tests. Rossi rates the turning potential of the latest frames, but will they save the rear tyre and how will they work at circuits with better grip? Yamaha could have found that out at Aragon.

The big question, of course, is whether Rossi’s title challenge is now over. His start to the season was superb – three podiums from the first three races, but not a single top-three at the last four. During the past five weeks he has slipped from first overall to fourth, just eight points ahead of rookie Johann Zarco.

So why not revert to the 2016 bike? “No way,” says Galbusera. “It’s already too complicated now! At most tracks the 2017 bike works well. At Le Mans it wasn’t bad, at Mugello it wasn’t bad and if Valentino hadn’t had the problems from his motocross crash, he could have fought for victory. Then five days later we arrive here and it’s a disaster: the bike is the same, the tyre and the grip is different.”

Galbusera may say no way, but there must be engineers within Yamaha saying never say never. Then again, perhaps the new frames from Monday and Tuesday will be the answer.

In a normal season Dovizioso would be able to look forward to the next races certain he can run at the front like he’s done at the last two. Normally, back-to-back victories suggest that a rider, his team and his factory have put the jigsaw together, so they will know what to do when they get to the next racetrack.

But it’s not like that now. “To think about the championship is impossible because every weekend is a different story,” says the man who’s won as many MotoGP races in eight days as the previous nine seasons. “Nobody can understand the future, especially this year. Our bike is the same bike we used at Le Mans, where we finished 11 seconds behind the winner, but now we have won the last two races.”

This is good news for Rossi, in a way. He currently stands a not insurmountable 28 points behind championship leader and team-mate Viñales, who had an even more miserable time skating around Barcelona. The bad news is that the way the championship battle see-saws between one rider and the next and one factory and the next over the coming months will most likely have more to do with tyre allocation than with the skill of the riders or the brains of the engineers.

One funny aside from the weekend (although not everyone will find it amusing): Franglais BSB rider Sylvain Guintoli had an interesting final MotoGP weekend subbing for injured Suzuki rider Alex Rins. Guintoli finished the race 17th, one place behind team-mate Andrea Iannone, which shows that the M1’s Barcelona woes were dwarfed by the GSX-RR’s, which, by no coincidence, is another corner-speed bike.

On Saturday afternoon Suzuki withdrew Guintoli from qualifying. The rumour went around that he was suffering from dehydration, but this wasn’t the problem at all.

“Like a lot of riders I had some inflammation in a tendon in my arm,” explained Guintoli. “I had the standard procedure – they inject anaesthetic into the tendon. But it’s a very fine line between putting the anaesthetic in the tendon and putting it in the bloodstream. This time it definitely got in the bloodstream, so I was completely high. I rode FP4 and it was a complete disaster: the whites of the kerbs were like a strobe. I felt like I was nightclubbing! I felt really ill, but even though I was mad inside about missing qualifying I was smiling, I was happy! Luckily the next day I felt fine.”

To add insult to Rossi’s situation, Sunday’s result marked a full year since he last won a race, the first time that’s happened in his 22-year GP career, apart from his two seasons with Ducati. Oh, the irony.