How come Valentino Rossi went from zero at Phillip Island to (fallen) hero at Sepang on Sunday? 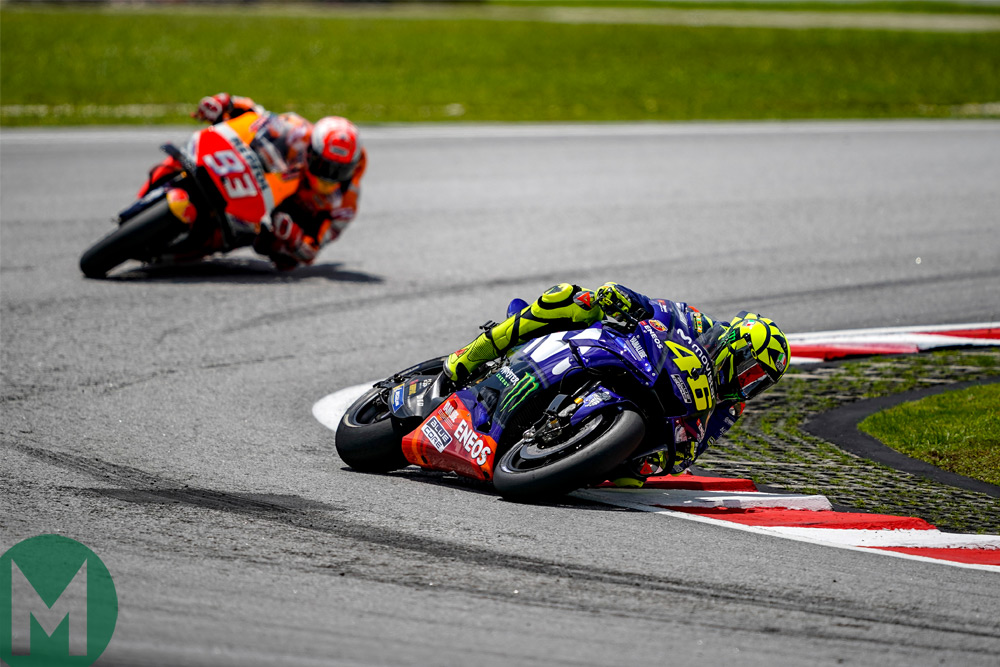 Sunday was Rossi’s greatest ride in more than two years – 46 races since he defeated a hard-charging Marc Márquez at Barcelona in June 2016. (It was a sign!)

First of all, his speed and consistency may shut up the armchair racers who suggest he is past it. When the bike and the tyres do what he wants them to do, Rossi can be as fast as anyone, even in suffocating 34 degC heat. That is nothing short of a miracle for a 39-year-old lining up on a Grand Prix grid for the 382nd time, with the dolce vita always awaiting him at home, whenever he so chooses.

He led with an almost superhumanly metronomic pace, his lap times over the first three quarters of the race never varying by more than 0.275sec. Afterwards Jorge Lorenzo took to Twitter to congratulate his former team-mate, because this is usually the Spaniard’s territory.

And for most of that time he had Marc Márquez bearing down upon him, like Jaws. But this was no great white shark playfully hunting a helpless swimmer. This was arguably the two greatest riders the world has ever seen biting chunks out of each other; just like they used to in 2015. Well, not quite. At first Rossi took a few tenths out of Márquez, then Márquez took a few tenths out of Rossi.

And then, queue the Jaws music: from lap 12 the great white got closer and closer and closer. “I understood that Marc would arrive, but I wanted him to arrive as late as possible. It could have been fun, because I was quite strong, so I could fight.”

The big question is, of course, why was Rossi so strong at Sepang? The previous Sunday he had cut a disconsolate figure in the Phillip Island paddock, utterly dejected by a miserable sixth-place finish, caused by a lack of drive grip out of the circuit’s numerous left-handers.

The man to answer that question is his crew chief Silvano Galbusera.

Rossi and Galbusera, like Yamaha as a whole, have struggled since they lost their tailormade factory electronics and Bridgestone tyres at the end of 2015. They have never felt fully comfortable in MotoGP’s brave new world of lower-tech unified software and Michelin tyres.

In 2015 Rossi finished on the podium at 15 of the 18 races, winning four of those races. Since then his average result has been a fourth-place finish. And apart from Assen last year – when it was his bravery rather than his bike that kept him ahead in treacherous drizzly conditions – he has hardly been in the fight for victory.

Galbusera says that Rossi has turned the corner – or may have turned the corner, because one near-run victory doesn’t make a season – because his crew have given up chasing outright performance.

That might seem strange in motorcycling’s highest-performance racing series, but this is their reality.

“Before we worked to keep the performance and save the tyre, but it’s not possible,” said Galbusera on Sunday evening. “So now we lose some performance and try to keep the consistency of the tyre. Valentino can be stronger with this different setting. But the racing becomes more like endurance than MotoGP!

“We have worked on the geometry to put less stress on the rear tyre because our problem was always tyre life, Valentino complained about the consistency of the tyres all the time – at the beginning of the race he was strong but whatever he did to save the tyre did not provide the answer. He could not use the Michelins the way he wants too because the tyres are too soft and they overheat. It’s different for Maverick [Viñales]: he is a different size and uses a different style.”

In fact, Galbusera started prioritising tyre life over outright performance much earlier in the season, but somehow the team and factory lost their way. Race bikes are strange machines, especially when you have less grip than you had a few years ago. Racing is a long and winding road, and when you take a wrong turning that takes you precipitously downhill it can take a while to get turned around.

Galbusera and Yamaha have worked at extending tyre life in all the usual ways: via engine management (by smoothing torque delivery), via traction control and via mechanical grip (bike geometry, balance etc). They’ve made some useful forward steps with the electronics at the last few races, but the most important improvement has come from better mechanical grip, with the bike rotated slightly backwards.

“We work on the geometry all the time,” Galbusera continues. “Valentino says it’s not easy to ride the bike like it is now, but it’s the only way to save the tyres. We try to follow a different way, to make the bike not the best performer but more consistent with the rear tyre and it seems to work well.”

“Now we have a bit more mechanical grip. But we have to be careful because the mechanical grip of the Yamaha has always been good, but if we use too much of that traction it overheats the tyre and the tyre will give up. So now we have to make the bike load the rear tyre a little more slowly.”

On the other hand, it is always possible that circumstances helped Rossi as much as set-up. For once, tyre wear wasn’t a big issue – lap times didn’t drop at Sepang as they’ve done at many races this year because the tyres gave more grip for longer. And the Malaysian tyre allocation seemed to suit all the Yamahas, because Johann Zarco finished on the podium (for the first time since Jerez) and Viñales would also have been in the fight, if he hadn’t qualified on the fourth row after a huge crash in FP4.

The softer tyres particularly suited Rossi because he has taken a new direction on tyre choice. “The new way we follow is to try to use a softer tyre from the allocation,” adds Galbusera. “Valentino usually feels better with a hard tyre because it gives him more support and better stability, whereas with a soft tyre he feels some movement in the bike, like in a streetbike, so he doesn’t feel so comfortable. But this is the only way to be strong.”

Although Rossi’s tyres allowed him to maintain that unerring consistency for the first three quarters of the Sepang race, he may have used the best of their grip when he crashed at the start of lap 17. He wasn’t the only one, because both the former world champion and the reigning world champion had ridden their slowest laps, thus far, on the previous lap. But perhaps Rossi’s bike had once again used its rear tyre more than Marquez’s RC213V.

Rossi finally tipped over the limit halfway through the horseshoe first-gear Turn One. “When I touched the throttle I slid the rear and I didn’t expect it, because I was more worried about the front,” he said. “I was very much on the edge, the rear slid too much and the bike went down.”

Apart from the crash, I’ve never seen @ValeYellow46 so consistent. More than 10 laps in just 1 tenth at the hottest and longest track impressed me today. And some said he started too feel his age after last race…

Rossi wasn’t happy to end such a brilliant ride like that, but at the same time he was at least happy that he had rediscovered the taste of fighting for victory; a taste that perhaps he was beginning to wonder if he would ever taste again.

“I’m devastated about the crash because it was my first mistake of the season at the worst moment, but on the other side I’m happy because we lived the dream for 16 laps,” he said. “After my brother’s victory it could’ve been a great day.”

Rossi admitted he had a little cry after his half-brother Luca Marini claimed his first Grand Prix success at the end of the preceding Moto2 race, which perhaps wasn’t the best preparation for his own outing.

“It was a great emotion, but I needed to sit down for maybe three hours to recover,” he laughed. “So, f**k, it was a difficult way to prepare for my race. But Luca’s win was an unforgettable feeling and this has been an unforgettable day because Pecco [Francesco Bagnaia] won our team’s first world championship. I’m very proud of my brother. I didn’t think he could win a race this year, so I’m surprised and proud.”

Just one race left, at Valencia, not Rossi’s happiest hunting ground. “It isn’t the best track for Valentino,” adds Galbusera. “But we’d like to have a good race there to understand if this is the way we must continue to follow.” 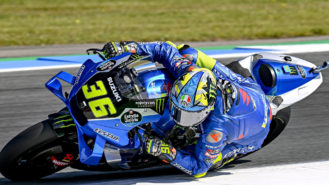