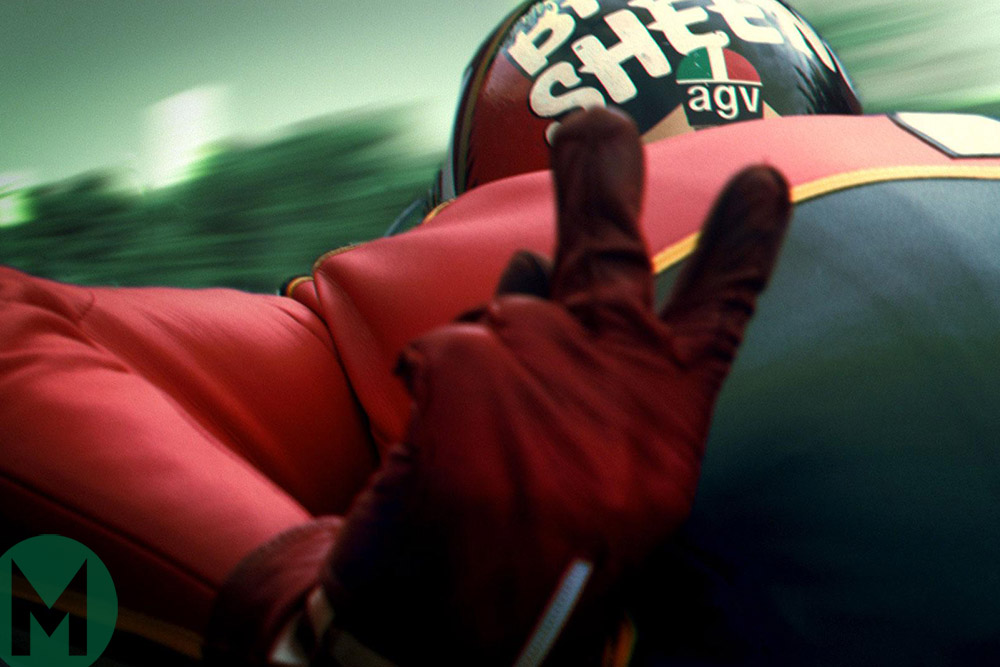 On August 12 1979, Barry Sheene and ‘King’ Kenny Roberts fought one of the greatest and most important Grand Prix duels of all time. Their battle for British GP victory was unforgettable for all kinds of reasons.

First, the pair were two of motorcycle racing’s all-time greats. Roberts was the prototype Marc Márquez, who changed bike racing with a new way of riding that left everyone struggling to catch up. Sheene was the prototype Valentino Rossi, whose rock-star persona broke him into the mainstream.

Second, Grand Prix racing was in a state of revolution in the 1970s. For decades the riders had been treated like performing animals by the FIM, promoters and circuits. They were ripped off, had to race on lethal circuits and housed in paddocks that were barely fit for human habitation.

Just weeks before the British GP the top riders had gone on strike at Spa-Francorchamps. By the time they got to Silverstone, Sheene and Roberts were well on their way to establishing a breakaway world championship – World Series – that would get them out of the clutches of the FIM and allow them to race on safer tracks for better money.

Third, the race was broadcast live on the BBC – a rare event in those days – which brought motorcycle racing to a whole new audience in Britain. Fourth, their duel was a superb example of bike racing as an art form. And finally, Sheene created one of the sport’s funniest moments when he gave Roberts a V-sign at the height of their duel.

The Briton and the American were the greatest riders of that era. Sheene had won the 1976 and 1977 500cc world championships, while Roberts took the 1978 crown in his rookie season and had pretty much wrapped up the 1979 title by the time the Grand Prix circus rolled into Silverstone.

With no real chance of regaining the title, Sheene threw all his energy into pleasing his adoring fans at Silverstone, where already he had been twice cruelly denied.

“Look at that – Barry Sheene is waving at Kenny Roberts!” screamed Murray Walker.

The first British Grand Prix had been staged in 1977, a few weeks after Sheene wrapped up his second world title, but Silverstone was a disaster. Plagued by head-gasket problems, he retired from the race in a cloud of steam and a storm of curses, riding his spluttering RG500 into the back of the Suzuki garage so hard that he buckled the forks against the wall.

The following year wasn’t much better. A rainstorm hit the circuit soon after the race had started, so riders came in to change from slicks to rain tyres; something for which their mechanics weren’t really equipped. Roberts’ crew took two and a half minutes to change tyres. Sheene’s took seven and a half. Amidst claims and counter claims of the organisers’ poor lap scoring (by stopwatch, pen and paper) Sheene was credited with third place, behind winner Roberts and British privateer Steve Manship, who had taken heed of the approaching rain clouds and started with intermediates.

Even 1979 British GP didn’t start well for Sheene. The 27-year-old could do no better than fifth in qualifying, 1.7sec behind Roberts on pole. At that rate, Sheene and his RG500 would be almost a minute behind Roberts’ Yamaha 0W45 at the chequered flag. 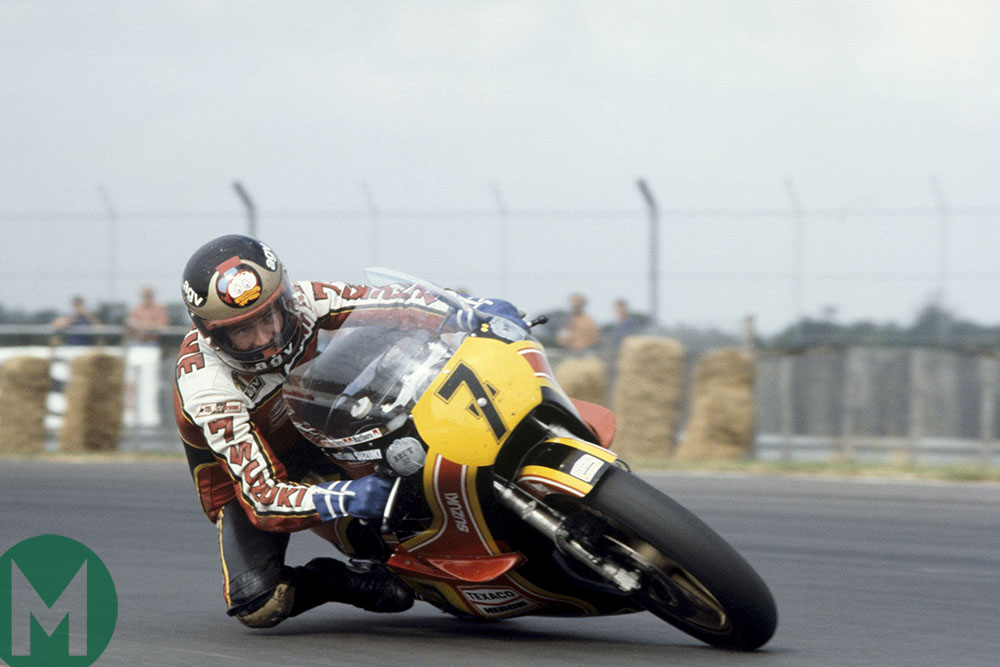 In those days Silverstone was even faster than it is now – 117mph against 107mph – and the secret to a good lap was getting through the mega-quick kinks at Maggots and Abbey as fast as possible. But Sheene couldn’t get his RG to do what he wanted through those sections. He changed frame geometry, suspension, everything, but all to no avail.

“Barry was under pressure and he was having a bit of a ‘mare – he was screaming at the team,” remembers Suzuki team-mate Steve Parrish.

“We’d all have a few drinks – we all knew that a couple of glasses of wine were better than staying awake, nervous, all night,” adds Parrish. “It was always a good time at the Heskeths – the house would be full of famous people; it was all a bit la di dah. After practice Barry and I would be starving before dinner, ready for a big plate of pasta, and we’d end up with a partridge wing and two tiny carrots because they’d all been scoffing caviar and champagne all day.” And Lord knows what else.

Never mind Sheene’s qualifying nightmares, Roberts just knew the home hero would be trouble in the race. “It was England and Sheene was going to be there no matter what – going into the race I knew that,” he says.

On race day it was Roberts’ turn for a disaster, during the sighting lap. “I got to Turn Three, laid it in and the bike went sideways. I looked down and there was oil everywhere – the clutch centre oil seal had popped out. So I gassed it up as much as I could to get back to the start because you didn’t get much time on the grid. Kel (Carruthers, Roberts’ crew chief and a former 250cc world champion) put the seal back with a screwdriver, poured some oil into the gearbox and sprayed the tyre with contact cleaner. The first lap was a little hairy.”

Roberts took the lead from Dutch Suzuki rider Wil Hartog at one-third distance, chased by Sheene. The scene was set for a classic encounter.

Roberts tried to make the break but couldn’t. “I could do three laps flat-out, and if I couldn’t break away then it wasn’t going to happen. So after that Barry and I were playing with each other – he knew I couldn’t outrun him and I knew he couldn’t outrun me. We both knew it was going to come down to the last lap.”

Sheene took the lead for the first time soon after half-distance, diving inside Roberts at the 130mph Woodcote right-hander, 50 metres before the start/finish line. Exiting Copse the next lap he looked over his shoulder and gave Roberts that infamous V-sign. 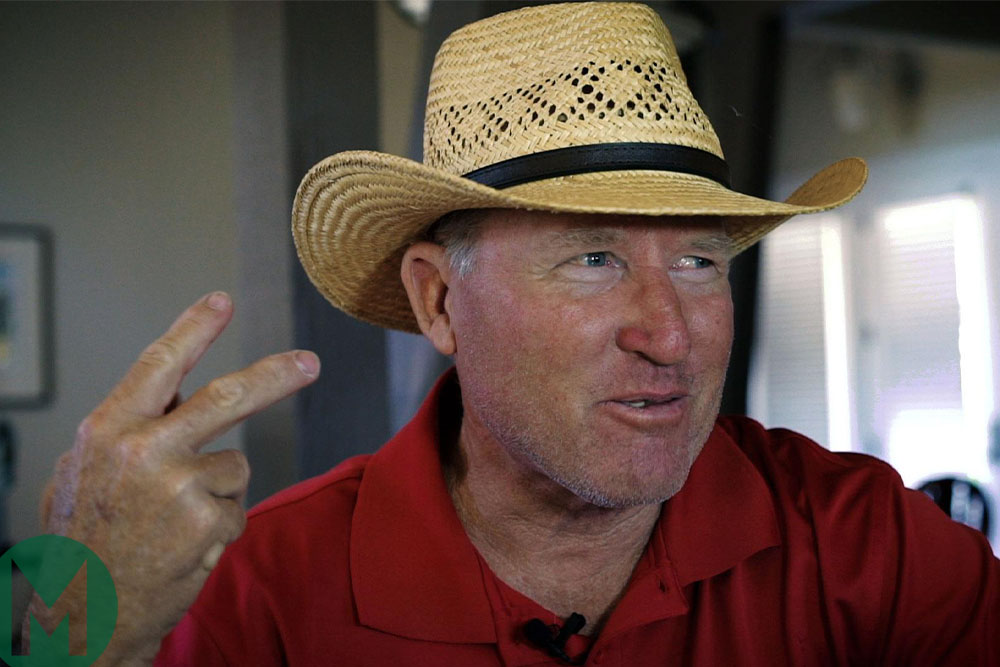 Roberts: “And then Barry went like this” Photo: sheenemovie.com

Most people found Sheene’s gesticulation amusing, especially Roberts. “When Barry gave me the bird it made me chuckle because people hadn’t seen me waving at him saying ‘f**k, let’s go asshole or the others are gonna catch us!’.”

Going into the penultimate lap Sheene was right on Roberts’ rear wheel, waiting to pounce and score a victory that would send the British fans into raptures. But as they swept through Woodcote for the last-but-one time they encountered a backmarker, George Fogarty, father of Carl. Roberts went inside, Sheene tried the outside and got carried to the edge of the track. In one moment he had lost 20 metres and there wasn’t much time to get it back.

“I knew he was there,” says Roberts. “But he wasn’t going to get to the inside of me, that’s for sure, and I made myself pretty wide.”

As Roberts drifted to the edge of the track, Sheene had the momentum to make a pass on the outside but there was nowhere for him to go. By the time he was alongside the Yamaha he had run out of racetrack and was inches away from a huge crash. He lost the race by one metre.

“The effort Barry put in was pretty amazing – to try and go that far around me. But he was happy – how could you not be? He’d given it everything he had. Really there was no loser that day – if you come that close, there’s no losers.”

After the race, Sheene was both raging mad and ecstatic at having come so close to glory. “Barry was furious, absolutely apoplectic with rage about that backmarker,” says Parrish. “It was a disaster to lose, but he was very pleased that he was very competitive and he was over the moon that the crowd had loved it. He was happy because he’d turned it around from being miles away in practice.”

Roberts’ fifth win of the year helped him secure the second of his three consecutive world titles three weeks later. “Silverstone is definitely one of my most special wins – anytime time I could beat Sheene on the last lap was special,” he says. “And apart from my [1979] Indy Mile dirt track win on the TZ750, it’s the one that gets talked about the most.”

And with good reason.