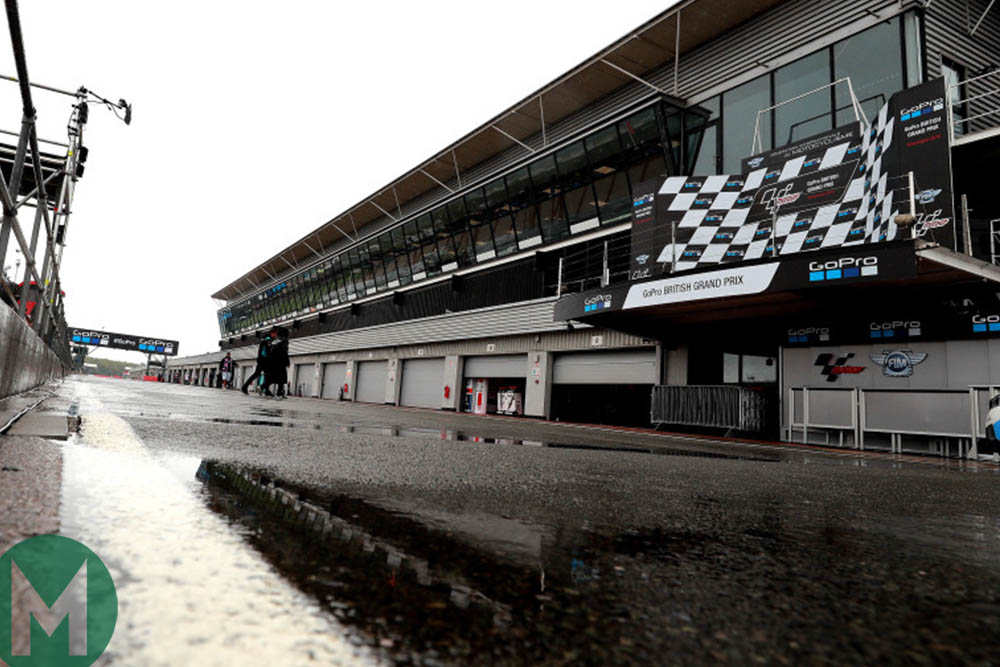 To call it a disaster would be generous. Last year’s MotoGP race at Silverstone was described as “one of the worst days in British motorcycle racing”, by Mat Oxley, Motor Sport’s MotoGP columnist and an Isle of Man TT winner.

During a washout weekend, puddles of water failed to drain from the track, leading to riders aquaplaning at 170mph during practice, followed by a race day of uncertainty and delay as officials watched the stubbornly resistant standing water before eventually cancelling the race on safety grounds.

“Sunday afternoon at Silverstone was chaotic, with riders trying to stay in the zone, in case they had to race, while also attending meetings to decide what to do,” wrote Oxley. “By the end of the day most of them were as fed up as the fans.”

The treacherous conditions were summarized by Franco Morbidelli: “I’ve been riding a long time and I never found conditions like that – not the atmospheric conditions but the conditions on the ground,” he said. “It was really strange, there was a big layer of water on the ground and it was quite impossible to do anything on the bike.

In the aftermath of the fiasco, some questioned the future of the race. Silverstone acted quickly. It launched an investigation and, the day after the cancelled race, began working with the renowned racetrack engineer, Dromo, to resurface the track.

Spectators were refunded but earlier this year, Silverstone admitted that the 2018 experience had dented ticket sales for this weekend’s event. Motor Sport has requested a ticket sales update, but this has not yet been provided.

On the evidence so far, a repeat of last year’s drama should be avoided – and not just because scorching Bank Holiday weather is forecast. 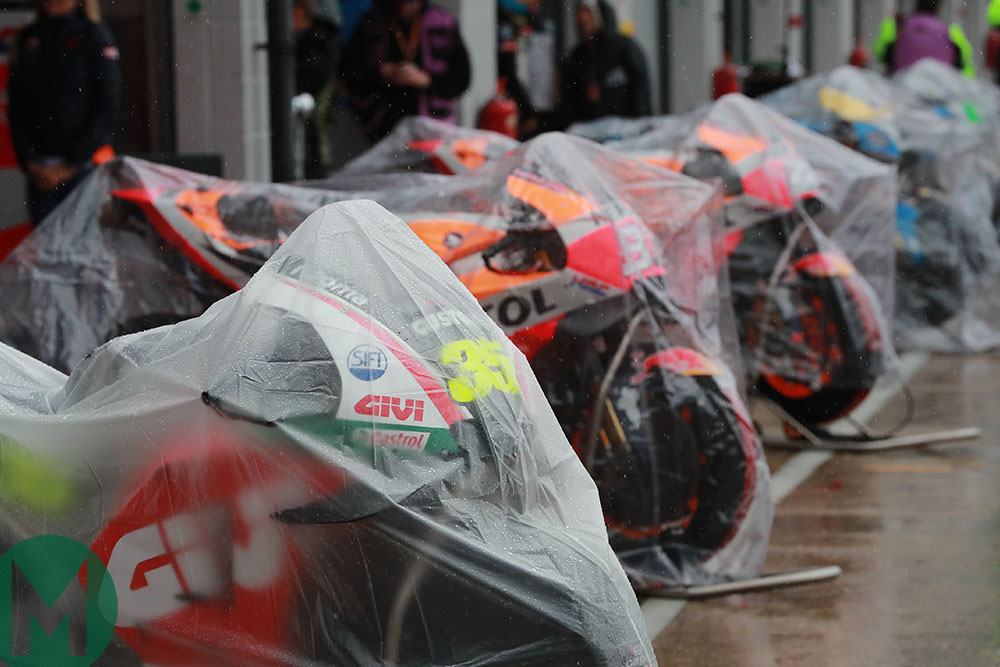 The covers remained on in 2018 Photo: Motorsport Images

Silverstone has now been resurfaced twice in two years. The first, in February 2018, came in for immediate criticism at that year’s British Grand Prix.

“The people they hired did the worst job ever,” said Lewis Hamilton last year. “It’s the bumpiest track I’ve ever experienced.

“It’s bumpier than the Nordschleife, which is 100 years old. It’s rattling your freaking eyeballs out of your brain.”

“What we are doing now is a quantum leap forward”

According to MotoGP officials, the surface had degraded during the year. Cal Crutchlow pronounced the surface “perfect” in March 2018, but the bumps had appeared by the time the F1 circus arrived in July.

“For sure they will need a new asphalt,” said Franco Uncini, MotoGP’s safety officer.

Silverstone acted within hours, calling in Jarno Zaffelli, of the Italian firm Dromo, as Motor Sport reported earlier this year in an interview with Stuart Pringle, Silverstone’s managing director.

“We had Jarno at the track at nine o’clock on the Monday morning [after the race],” said Pringle.

Dromo, which designed the Termas de Rio Hondo circuit and has been involved with resurfacing, reprofiling and safety upgrades at Sepang, Mugello, Misano and Imola, scanned the Silverstone surface and identified the changes required to improve drainage.

Up to 140mm of tarmac was scraped off the old surface, with new high-tech asphalt layered on top in June this year. 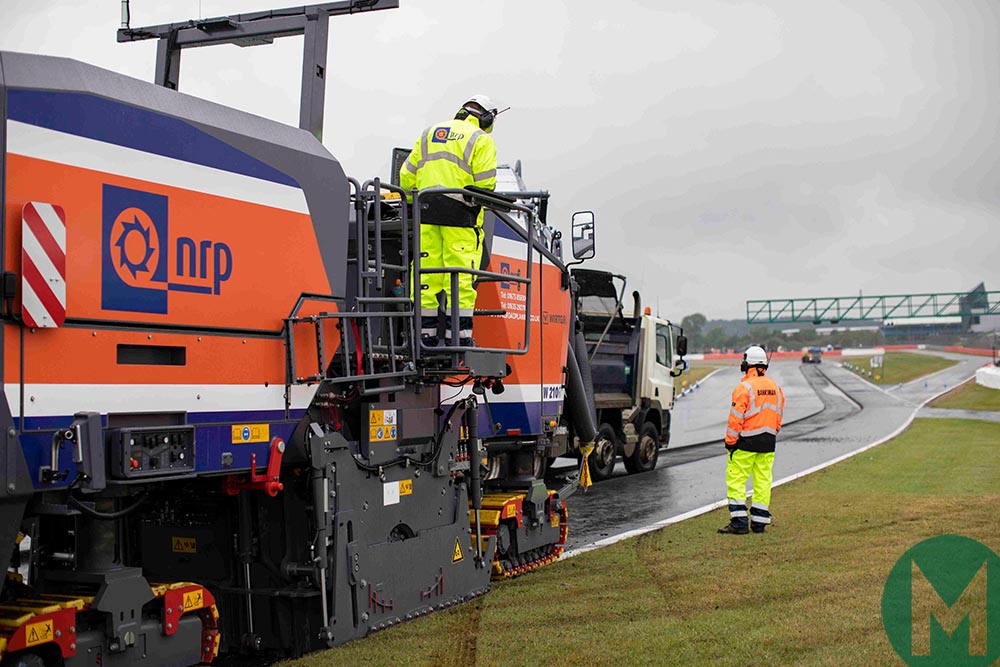 “We’ve learned the lessons of last year and we’ve left no stone unturned – what we are doing now is a quantum leap forward,” said Pringle. “Dromo is very specific in its technical requirements. Tarmac [the asphalting contractors] has had to buy two brand-new planer machines of a specific make, model and type, according to Dromo’s request. They cost £500,000 each.”

The initial findings were positive, with drivers at this year’s F1 Grand Prix praising the improvement. Since then, further work has been carried out to reduce a bumpy area at Brooklands (Turn Six).

The work has already earned Silverstone a one-year contract extension that keeps MotoGP at the circuit until at least 2021, and officials are looking to secure the race further into the future.

“If anyone questions our commitment to motorcycle racing, I’d point them to the fact that we’ve done two full resurfacing jobs in two years. It’s been a massive undertaking that keeps all the good bits of Silverstone – the fast, flowing character of the layout – with state-of-the-art asphalt that will last many, many years and I hope will secure MotoGP at Silverstone for the long run.”