If you wanted to explain the genius of Enea Bastianini to your mates down the pub you would have to tell them about Clark Kent and Superman.

Bastianini’s transformation isn’t unique in the world of motorcycle racing, in which many apparently nice young men grow horns when they climb aboard a race bike, but the 24-year-old Italian is something else. He is so chilled you would never believe what happens to him when he climbs into his Alpinestars, like Kent disappearing into a New York phone booth.

The nice kid becomes a beast, hence his nickname, La Bestia, Italian for the beast.

On Sunday night the beast made people cry. His unexpected victory was a debut success for the reborn Gresini independent team, run by Fausto Gresini’s widow Nadia Padovani.

“Enea is the genius of two wheels, I love him, he’s full throttle!”

Gresini, a twice 125cc world champion – whose team won the 2001 250cc world title with Daijiro Kato and many MotoGP races with Sete Gibernau, Marco Melandri and Toni Elias – succumbed to Covid-19 in February 2021.

“It’s so emotional for the team – we all cried at the end of the race,” said Bastianini after his debut MotoGP success.

Last year he twice proved his talent in his rookie MotoGP season, taking podium finishes at both Misano races, aboard a two-year-old GP19.

“But it’s his home track,” cried the non-believers.

For those who can see beyond the results it was obvious right there that the youngster has something special about him, a kind of ethereal talent.

“Enea is the genius of two wheels, I love him, he’s full throttle!” Ducati factory team manager Davide Tardozzi told me after signing Bastianini in 2020, when the youngster was on his way to the Moto2 title. “He can make me crazy – he does ten laps, then makes the fastest lap on lap 11. I say, ‘Why didn’t you think about making the fastest lap earlier?’. And he says, ‘I was thinking about something else’. Enea is like this – he can invent things. He doesn’t know how he does things buts he’s able to do them. I love it!”

Ducati was so convinced of his potential that it signed him on a factory contract and put him with crew chief Alberto Giribuola, who studied electronics at Turin university, focusing on mechatronics, a mixture of mechanics and electronics. It was Giribuola who guided Andrea Dovizioso to second overall in 2017, 2018 and 2019, behind Marc Márquez. 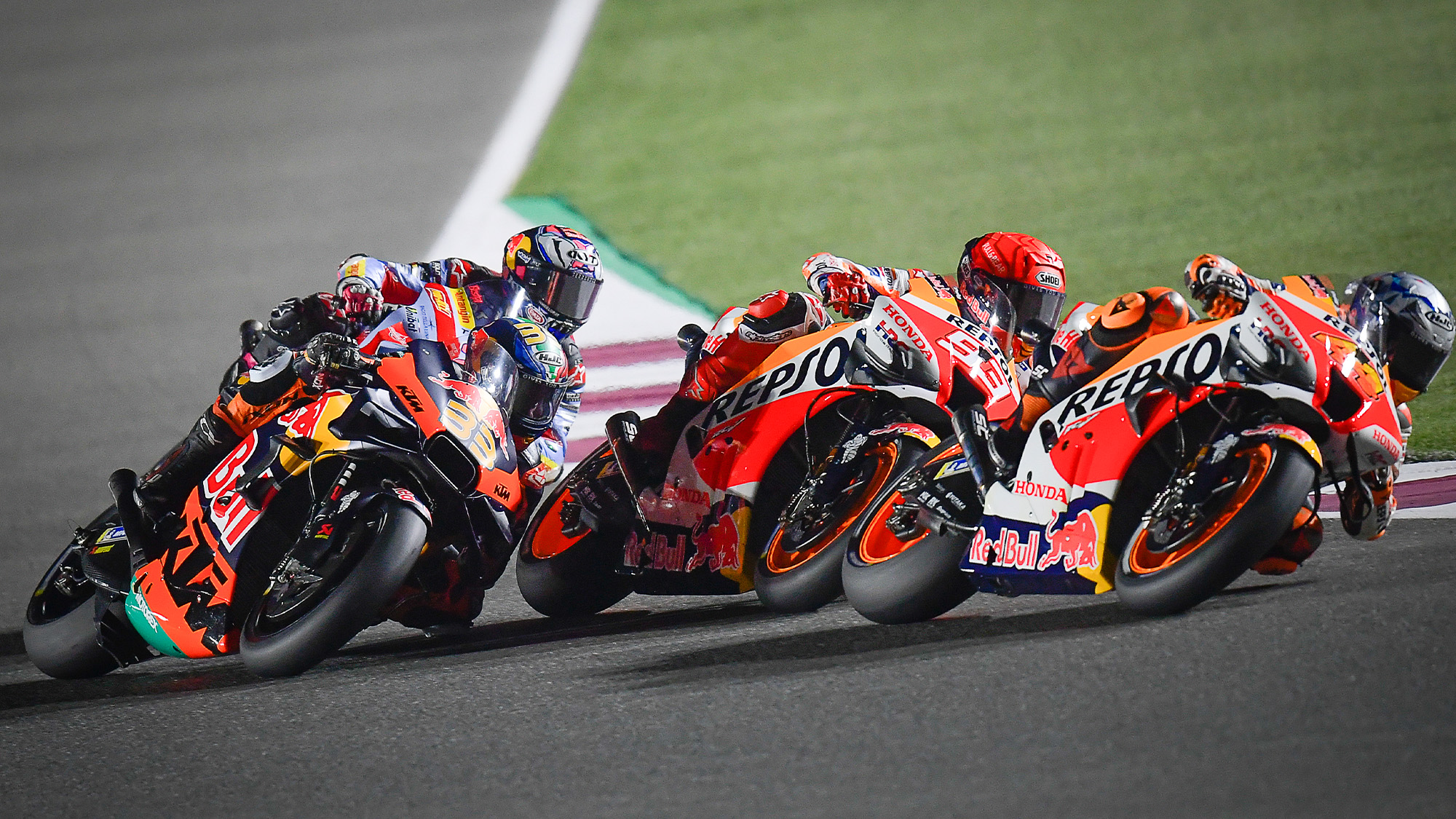 Of course, Bastianini isn’t all natural talent. He has a cool, analytical brain, so he doesn’t override the bike and he works quietly in the garage, following the advice of Giribuola, who knows exactly how to get the best out of a Desmosedici.

On Sunday Bastianini did his usual trick of leaving his best till last. He rode the fastest lap of the race with five laps to go, at a track where tyre consumption is notoriously high.

And the 2022 Qatar GP wasn’t a slow race. In fact it was the fastest ever, 11 seconds better than last year’s Doha GP, a massive improvement of half a second a lap. True, the track was a few degrees warmer than last, thanks to an earlier 6pm start, but last year riders had nine days at the track to get up to speed: three days of testing, then the Qatar and Doha GPs.

Long-time leader Pol Espargaró set a brutal pace on Honda’s all-new RC213V, but his soft/soft tyre choice left him struggling in the final laps and in the end he was easy prey for the winner.

“We did a very good job, working very well with the electronics to prepare for the race,” added Bastianini, who benefits from Giribuola’s huge knowledge of using the torque maps to help save the rear tyre. “In the warm-up I saw I had really good pace so I understood I could have a good race. The medium rear was the best choice and I really pushed in the last seven, eight laps, like my style.

“I think I first really understood my potential in Moto2. I understood that I can be fast everywhere with any bike, but MotoGP isn’t easy because so many riders are so fast.”

Bastianini rides hard with the front tyre, so he can look after the rear, because the rear is almost always the limiting factor in the closing stages of a race.

Three times a race winner in both Moto3 and Moto2, he is the son of parents who run a market stall in his hometown of Rimini, Valentino Rossi country. You’d therefore think he would be a VR46 rider but he never has been, because he prefers to do things his own way. He is the 25th Italian to win a premier-class race, the last two being VR46 riders Pecco Bagnaia and Franco Morbidelli.

Bastianini made his GP debut in 2014, so the man to watch was reigning MotoGP champion Márquez, so he looked and learned.

He saw how Márquez won races by hammering the front tyre into turns and saving front-end slides with his elbows, so when he moved from skinny-tyred Moto3 bikes to Moto2 machines he dedicated himself to learning how to use his elbows as outriggers. 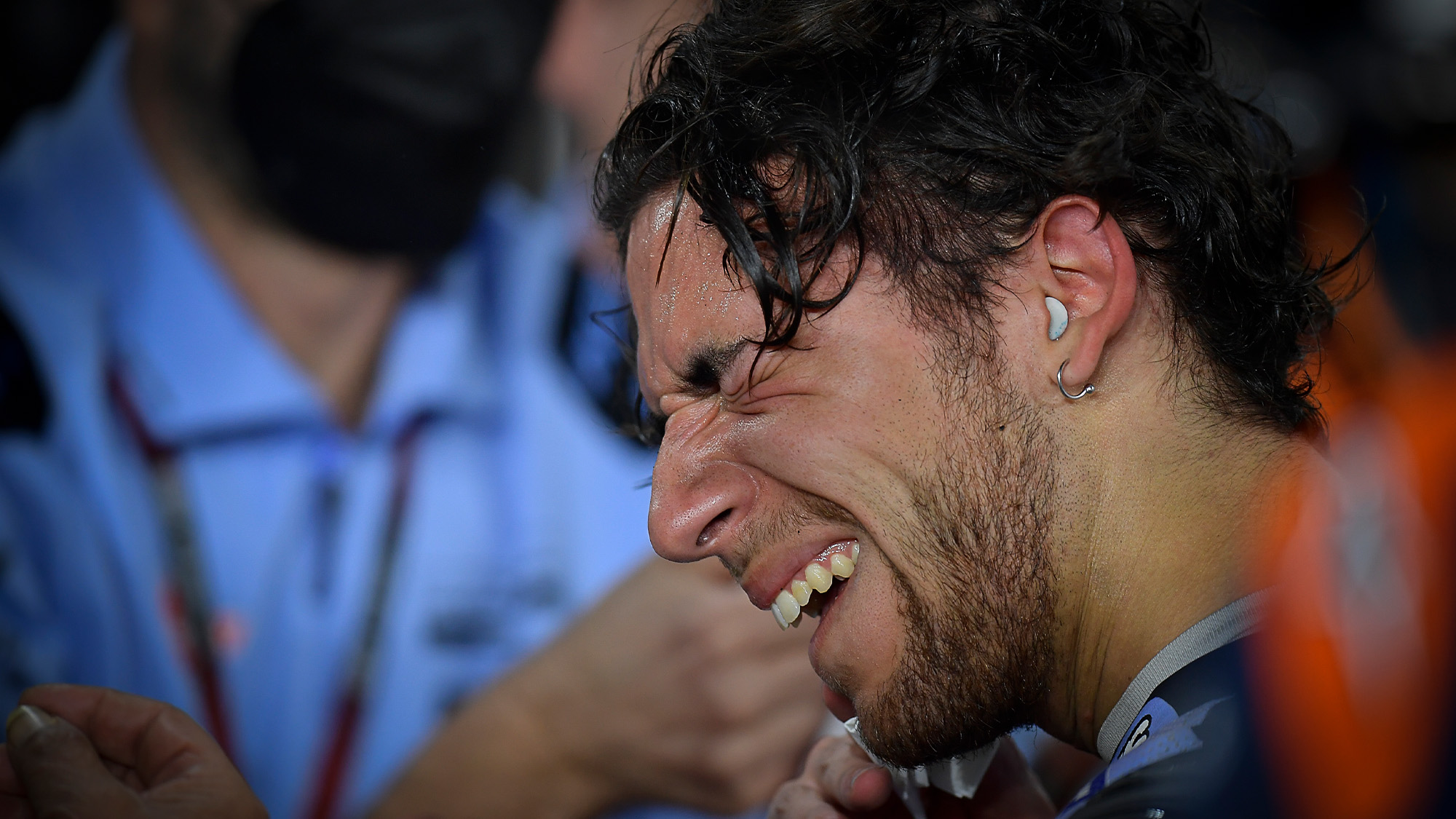 Tears of you and sadness – Bastianini and the Gresini crew

His GP21 is a much, much better motorcycle than the GP19, which “had a lot of rear-end pumping and a lot of shaking on the straights”.

It is also the fully sorted motorcycle that won four of the last six races of 2021 and nearly took factory team rider Bagnaia to the world title. When Bastianini topped this year’s first pre-season tests at Sepang many people didn’t take it too seriously. They were wrong.

His Losail victory was in stark contrast to the performance of the factory squad. Bagnaia went into the first race of 2022 as title favourite and left without a single point after crashing out and taking Pramac GP22 rider Jorge Martin with him.

Bagnaia’s team-mate Jack Miller only lasted a few laps before his electronics went haywire, his GP22’s sector-by-sector locator malfunctioning, so the bike didn’t know where it was.

“At some points I had 100% power and at others I had virtually no power at all,” said the Aussie. “Coming out of the last corner I thought I was going to get run up the arse because the bike was so slow, even though I had the throttle wide open.”

Before the season started there was much talk of the Ducati armada – eight GP22 and GP21 machines, a full third of the grid – dominating the championship. Sure, Ducati won the race but its next finisher was Pramac’s Johann Zarco in ninth and Luca Marini was its only other points finisher in 13th.

That’s motorcycle racing for you – predications are pointless.

Ducati’s start to 2022 was thrown into disarray when the factory decided its faster-than-ever 2022 engine wasn’t good enough, because it causes too much wheelspin, a problem that became apparent at the first pre-season tests at Sepang last month.

Factory teams must equip both their riders with the same spec engines (indie teams can choose per rider), so Ducati homologated slightly softer 2022 prototype engines, tested at Jerez last November, for Bagnaia and Miller. 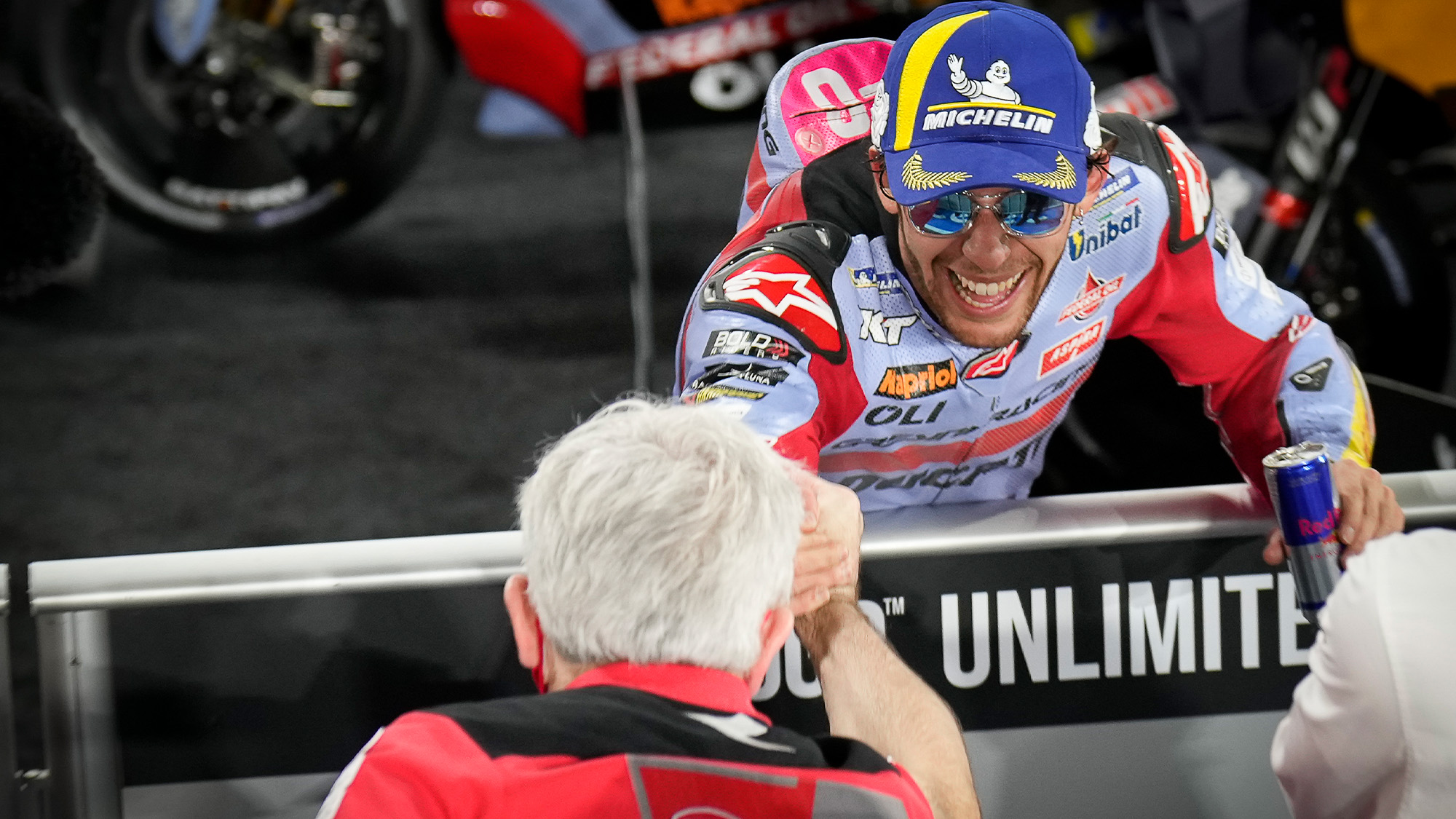 Do you want a job for 2023? Ducati race chief Gigi Dall’Igna congratulates the winner

So the team was just too busy adapting during the weekend.

“We were working too much, so I wasn’t ready for the race,” said Bagnaia. “When you are in a factory team you should concentrate on riding, so we have to do that in the future.”

If Ducati’s factory team went home disappointed, never mind Bastianini’s win, they were probably no more disappointed than Suzuki and Yamaha, which won both of last year’s Losail races with its YZR-M1.

Despite the GSX-RR’s hugely improved top speed, Suzuki men Joan Mir and Álex Rins once again struggled in qualifying – ending up on the third and fourth rows, bettered by Ducati, Honda, Aprilia and KTM V4s – but they had the best race pace, so they were expected to fight their way through to join the leaders. 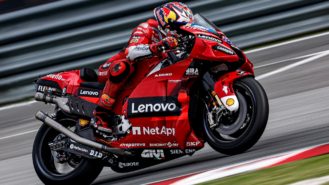 World champion Fabio Quartararo qualified next to Rins and even he was confident he could follow the Suzukis through the front.

“Tyre consumption is really high here, so I think what we will lose in the beginning [starting from so far back] we can recover later,” said the Frenchman, who won last year’s second race at Losail from ninth on the grid, on Saturday.

What stunned Suzuki and Yamaha was the pace of the race. They thought they’d be there but the lead group was way too fast for them.

During the winter Suzuki found lots more horsepower – probably at least 15 horses – to have the fastest bike at Losail, with Mir’s GSX-RR averaging 220.4mph/354.8mph in the race – but that wasn’t enough to beat the V4s, with Ducati, Honda, KTM and Aprilia taking the top four places.

The Suzuki runs minimal downforce aero, which obviously helps on the straight, but not in braking, turning and exiting corners. Or not at Losail, at least. Mir finished the race an unhappy 4.8 seconds behind the winner, while similarly unimpressed Rins was eight seconds down and a demoralised Quartararo was 10.5 seconds back, in other words running his 2021 pace.

Quartararo was especially in dire straits on the start/finish straight, more than 6mph slower than the fastest bike, a bigger disadvantage than he had last year. Yamaha have homologated bigger aero for this year, but it’s too much for the M1’s lacklustre engine. A better aero package may be ready for May’s Italian GP at Mugello, but if it isn’t then Quartararo wants to homologate Yamaha’s old aero, with less downforce.

Mandalika may be better for the inline-fours, but perhaps I shouldn’t make any predictions.