No one was surprised that Fabio Quartararo won Sunday’s Italian GP, even though he had the third slowest bike in the race. Mugello top speeds always make the headlines, but whatever Quartararo and his Yamaha YZR-M1 lost on the track’s 0.7-mile/1.1km start-finish they more than offset through its 15 sweeping corners.

Once again, Quartararo confirmed the reason for his 2021 turnaround – a front end that gives him the confidence to push to the absolute limit because the chassis tells him when the front tyre is about to let go. Last year’s chassis didn’t do that, hence his inability to consistently extract 100% from the tyre.

Pecco Bagnaia was expected to be the world championship leader’s greatest rival, but he crashed out early doors, his head still awash with the emotions of Jason Dupasquier’s passing.

“Today was impossible,” said the 24-year-old Italian. “After the news of Jason I tried to think only about the race but it was impossible. I was close to being fully concentrated but after the one minute’s silence it was impossible. In any case, finishing first or last today, nothing changes. This is maybe one of the worst days of my life. I asked to not race. It wasn’t correct to race.”

With Bagnaia out of the race Ducati’s fastest man was Johann Zarco, who missed his fourth podium of the year by a fraction, crossing the line half a second behind Suzuki’s Joan Mir, who took his second top three.

Therefore the biggest surprise of the race was second-placed Miguel Oliveira on the KTM. Last year’s RC16 won three races and was rightfully considered to be a 2021 title contender. However, a change in Michelin’s front-tyre allocation transformed the bike from victory contender to languishing in the wrong half of the top ten.

All that changed at Mugello, for two reasons: a revised frame and new fuel, making the RC16 not only quicker through the corners but also faster down the straights.

“The frame is to help us a bit in corner exit and to be gentler with the rear tyre,” explained Oliveira who finished 2.6 seconds behind Quartararo.

Team-mate Brad Binder finished just 2.3 seconds further back in fifth, despite riding a few laps with his airbag inflated, following a lap-two collision with Marc Márquez.

The revised frame allows both KTM’s factory riders to get the bike turned quicker, so they can take some of the pressure off the front tyre sooner. That’s the first positive, because they’re no longer so hampered by the 2021 front tyres. The second positive feeds from the first. By getting through the middle of the corner quicker they can lift up the bike sooner, which delivers a faster corner exit which is kinder to the tyre. In other words, it’s a win, win, win. 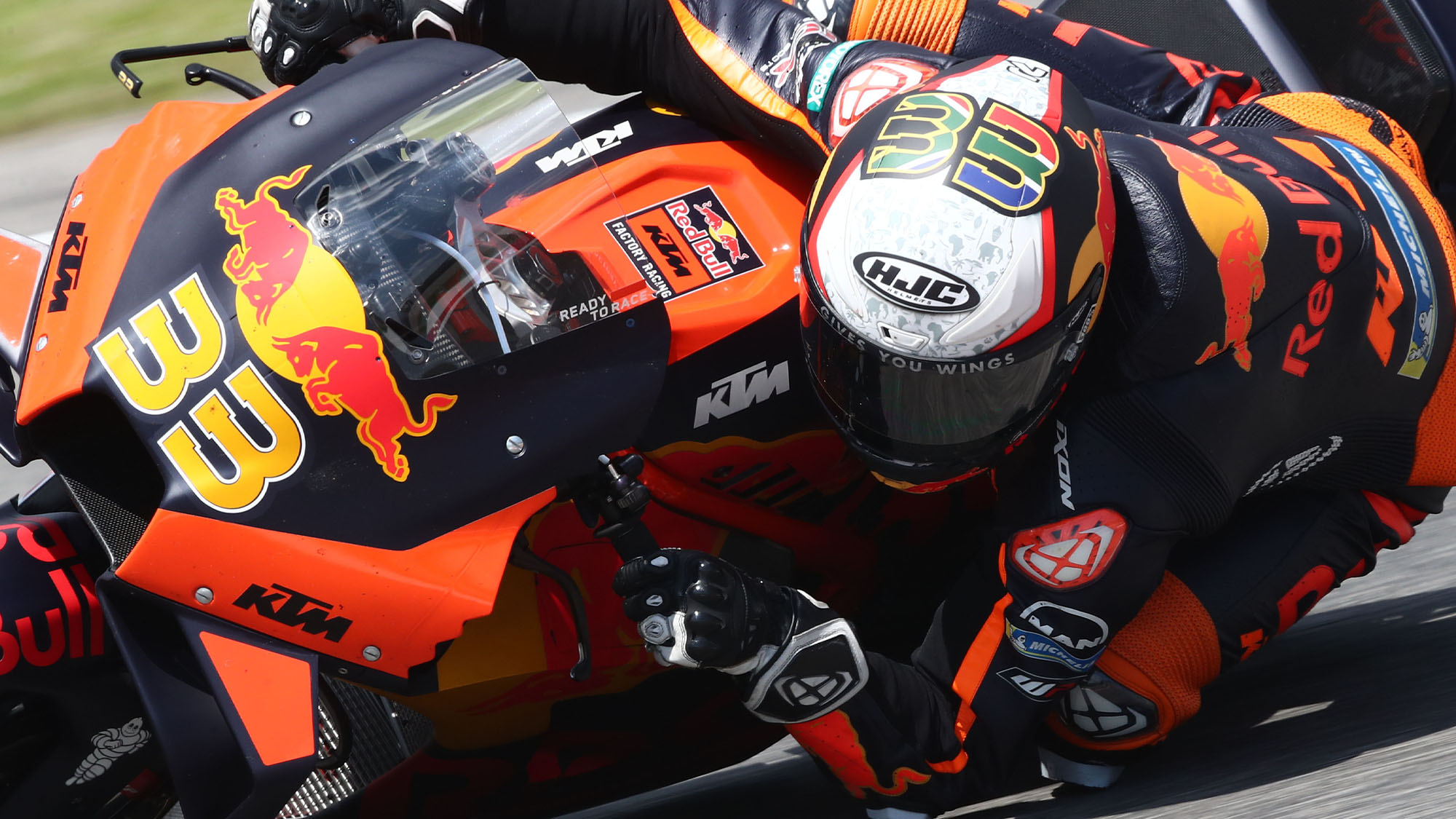 Brad Binder scored his best result of the year, just 4.9 seconds behind the winner

“The main point we’ve improved with the new frame is that we’ve found a bit of natural turning,” explained Binder. “And obviously when the bike turns more naturally and you use the edge of the rear tyre less it’s also better for the tyre over race distance, because you can get onto a bigger contact patch quicker and prepare the exit better.”

The new frame confirms KTM’s ability to react to problems faster than any other factory in MotoGP. There are two main reasons for this. First, the way KTM’s race department works. Second, the company’s use of steel instead of aluminium. Steel frames can be fabricated and completed much quicker than aluminium-alloy frames, which require post heat-treatment after welding.

“This is the key to the company,” said Paul Trevathan, Oliveira’s crew chief. “The amount of work they do at the factory and how quickly they do the work is fantastic. That’s the key to why we are where we are after only a short time in MotoGP. The riders really appreciate that we never give up and we’re always thinking and always pushing.

“Using a steel frame definitely helps, especially now with 3-D printing. Before you had to source the tubing with the correct wall thickness. Now we can print whatever you want, which makes things even better for us.”

The tubing in the RC16 frame may look straightforward but it isn’t. Inside there are multiple different thicknesses, cone sections and so on, all designed to create twist points in the desire areas.

KTM first tried the new frame at the post-Spanish GP tests but didn’t use it at Le Mans because the changeable weather wouldn’t have allowed them to have evaluate it in any meaningful way. Thus Mugello was the first time it had been used in anger.

“We really pushed hard to create something different to help us with the front-tyre situation,” added Trevathan. “We wanted to help the turning so that the guys don’t rely on the brakes so much, which was overloading the front tyre.

“Now the guys can turn with more corner speed, rather than using the stop-and-start way. I think we’ve really achieved that and the consequence of turning better is making a better exit, because when you’ve got the bike more picked up you’re on the better part of the tyre and the bike’s more stable on that part of the tyre, so that’s where the guys really gain.” 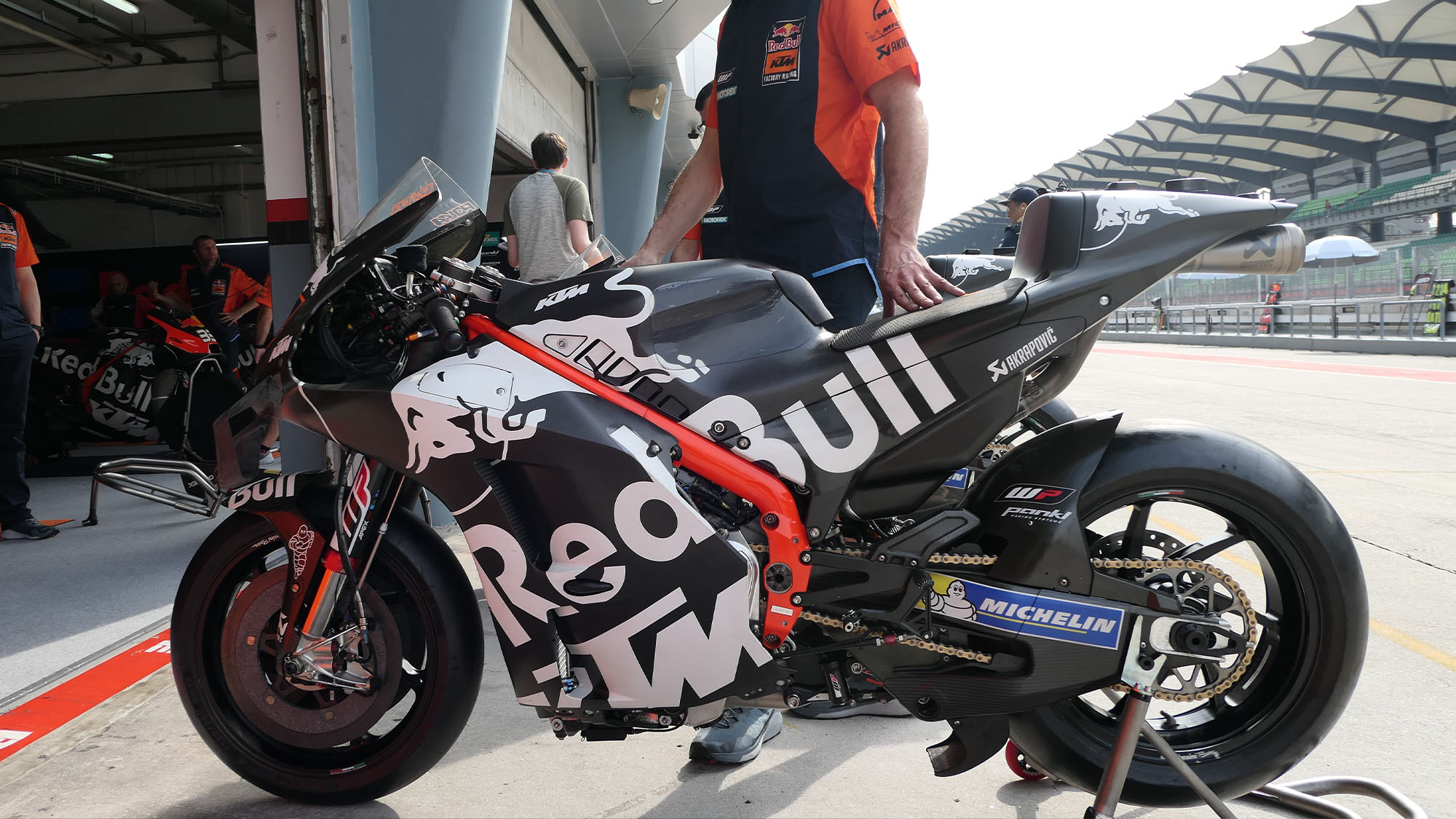 The big change between KTM’s original 2021 frame and the revised frame is stiffness. Obviously KTM won’t go into details, so I’m guessing that KTM engineers have been working on the so-called self-steering effect. This is a very tricky process, through which engineers try to make the cornering loads bend the chassis, so the motorcycle’s wheelbase becomes minutely bent through the corner, which helps turning because something curved will turn a corner better than something straight.

The other secret to KTM’s new-found speed was the factory team switching to a new brand of fuel. At Mugello it switched from Elf to ETS. KTM has partnered with ETS for many years in off-road racing, so it was perhaps logical that the companies would get together in MotoGP. 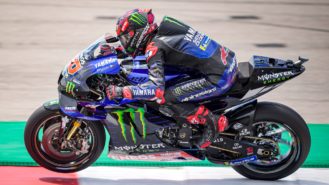 The result was Binder equalling MotoGP’s all-time top-speed record during Friday morning practice, when he reached 225.2mph/362.4kmh, the exact same speed that Zarco had reached during Losail practice earlier in the year. And for the first time since 2010 Ducati didn’t have the fastest bike during a Mugello race weekend, although the Desmosedicis did have a fraction more top speed in the race.

KTM is the second MotoGP outfit to use fully synthetic ETS fuel, after Suzuki switched to ETS halfway through 2019. It’s easy enough to work out who uses ETS, because the fuel has a very distinctive smell.

“Obviously the current rules didn’t allow us to update the engine for this year and we weren’t happy with the engine performance, so the guys worked overtime on that,” added Trevathan. “It’s all about how the fuel burns, then changing the advance and retard and how everything works with the electronics so you can get a better burn before you start detonating

“The bike was unbelievably fast at Mugello, which makes things quite a bit easier for the riders because they can attack and defend easier. Our guys could stay in the slipstream of the Ducatis and the other guys couldn’t pass them. So we could stay close to the Ducatis on the straight and pounce in other areas where we were stronger. The key to Miguel’s result was that and being able to take those couple of bike lengths out of the Suzukis down the straight.”

Oliveira and Binder are pretty sure that KTM’s latest improvements will help them everywhere, so don’t be surprised if they’re back in the hunt for wins at the next few races, as they get the RC16 better adjusted to the latest improvements.