Maverick Viñales did what everyone knew he could do on Sunday: fight for victory and – following Pecco Bagnaia’s exit – win the race.

During his three and a half seasons with Yamaha, Viñales has scored 12 pole positions, but only converted three of those poles into victories, which pretty much sums things up. The former Moto3 world champion is one of those riders who is usually at his fastest when he’s testing, practicing and qualifying, not when he’s racing.

How many times has the 25-year-old Spaniard gone into a race as favourite after a blindingly fast Friday and Saturday, only to engage reverse gear when the lights go out?

The paddock has a nickname for this kind of rider: winter testing world champion.

Viñales isn’t the first to be so-called. Former 500 GP winner Carlos Checa was the same. Back in the days when testing wasn’t so restricted the Spaniard would turn up at the track with his factory Yamaha team and obliterate the lap record, marking himself as clear race favourite.

Then the race weekend would begin and bit by bit, things would fall apart. Viñales is too often like that. When things go well he’s as fast as anyone, but as soon as things go awry, he loses his focus and misplaces his talent, which miraculously reappears next time he goes riding.

“Pressure affects everyone,” says Checa. “It’s one thing to play when you bet zero, but when you bet a lot it’s completely different. Some people can manage this automatically and others find it more difficult. It can take many years to reach that clever mind in racing.

“When I raced 500s I liked to play too much with the set-up, then finally after three days of testing in Malaysia the lap time would come. But when you are at a race, with not much practice time, when you must prepare the bike well and test different tyres, it’s mentally very different.

“There is a procedure and you need to understand the way to prepare the race. Look at guys like [Valentino] Rossi and [Andrea] Dovizioso – often you see them running around in practice in 16th or 17th, because they are using the same tyres the whole session. Then on Sunday they are up front, so people say, ‘How is this possible?!’.

“The situation changes completely between testing and racing. For me, the pressure was the most difficult thing to manage, especially when you are playing for a championship. You can win one race, get another good result, but then race by race the pressure isn’t easy to manage, so you forget to enjoy riding the bike, then you don’t ride with the same freedom, with the same easy way you ride when you don’t play for a result.

“It takes a clever mind to control the pressure, the nerves and the tension that are created by the expectations of the race. Some people aren’t able to manage that when they are young.”

A few years ago Jorge Lorenzo suffered similar problems. At the start of the 2015 season he was lost, failing to score a single podium from the first three races, so his father went to work.

“We worked on making him less nervous at the start and in the early laps,” says Chicho Lorenzo. “I would tell him to get into the mental situation of being on the grid. ‘OK, so where are you?’ ‘I’m on the grid.’ ‘OK, what’s making you nervous?’ ‘The race is about to start.’ ‘OK, so let’s analyse why.’ Then we worked on those problems to make him totally calm and concentrated’.”

Lorenzo Senior goes as far as using methods employed by Mossad, Israel’s controversial intelligence agency, trying to keep his son and other riders calm in the midst of chaos.

“Mossad train in simulators in high-stress situations, monitoring heart rates and teaching people to be at their limit while remaining calm, because the calmer you are, the stronger you are,” he adds. “Look at Valencia 2015: it was the most important race of Jorge’s life; he had to do everything perfectly, he couldn’t make a single mistake. So he had worked a lot on that from a mental point of view.”

Viñales has had so many Sunday disasters over the last few years, usually attributed to problems caused by a full fuel tank, Moto2 rubber, the wrong tyres and so on. No other rider has suffered such a litany of problems over such a long period. So surely there’s something else at work here because every rider on the grid has to start the race with a full fuel tank, deal with different grip levels following the Moto2 race and sometimes contend with problems caused by an incorrect tyre choice.

When I interviewed Viñales at the end of 2018 he was already looking for a sports psychiatrist who might help him keep a cooler head on race days. He did briefly work with someone in Qatar, which had some effect, but he’s never fully engaged with a professional to fix his problems. 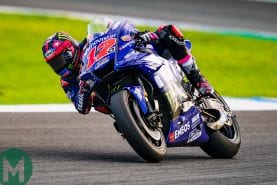 How I ride: Maverick Viñales

Somehow he needs to learn to stay positive when things don’t go right, instead of habitually plunging into negative mode. Positivity is one of the most important mental weapons a racer can have – that’s why we so often see riders grinning at the camera, fractured arm or wrist in a cast, with a big thumbs up. In this game it’s far too easy to fall into despondency, so you mustn’t let it happen.

After the first Misano race Viñales was distraught. He started from pole, got beaten up on the first lap by team-mate Rossi, Franco Morbidelli and Jack Miller, then had Fabio Quartararo, Álex Rins and Bagnaia come past.

“I don’t know what to say – it’s the same as usual from 30 races ago,” he said. “It’s very difficult as a rider to believe and to keep motivated when I need to change my riding style 70 times in one weekend to make the bike work.”

In fact MotoGP riders change their riding technique all the time, from session to session, from corner to corner, to make the most of the bike in every situation, so this is entirely normal.

Viñales’ San Marino GP post-mortem concluded that he had chosen the wrong rear tyre, or at least his team had. He was the only rider on the grid to go with the hard option, which he used to great effect in practice.

Despite concluding that an incorrect tyre choice was the problem, Viñales says he decided to make some big changes to his bike settings and race preparation for the second weekend at Misano.

Firstly, he changed his focus from the rear of the bike to the front.

“When I have grip I can make the lap time but as soon as lose grip I can’t brake at the same point, I can’t turn the same and I don’t have confidence with the front, so my thinking is to work with the front,” he said on Friday evening.

“We have tried to find more and more from the rear and finally after three years we’ve found nothing, so now we are going to find the lap time with corner entry and corner speed. I need something different, because I cannot keep going the same way.”

A good start, but during Saturday morning’s FP3 sessions it looked like things were falling apart again. Viñales had a few moments with the front, which had him angrily shaking his head as he rode back to his garage for adjustments.

Crew chief Esteban Garcia looked like he had seen a ghost but managed to keep his rider cool and get the problems fixed.

Secondly, Viñales told us that he had changed his general approach to the weekend.

“We are working in a very different way from other weekends when we prepared more for one lap,” he said after qualifying. “Now we think all the time about the race set-up.”

You what?! Surely he didn’t really mean this? If he did, this would explain why he’s taken so many more pole positions than race wins. But I don’t believe that a rider of his experience, riding for one of the most successful MotoGP factories, has only just realised that the race is more important that qualifying.

Of course, when you win the race, all the arguments, all the conjecture, all the bullshit are for nothing, because victory trumps everything. Viñales and his crew were right on Sunday and everyone else was wrong. That’s the nice thing about racing – it’s not like painting a picture or writing a book, there is a definitive answer to who did the best job and who didn’t.

After several years running along at tick-over, Yamaha’s MotoGP project is picking up revs because factory bosses have realised they need to get serious if they are to beat Honda…

Would Viñales have beaten Bagnaia if the Italian hadn’t fallen on lap 21 of 27? Possibly. From lap 16 he had started chipping away at the Pramac Ducati’s advantage, closing the gap from 1.5sec to 1.1 sec, increasing pressure on the leader.

Bagnaia couldn’t understand why he had lost the front at Turn Six.

Perhaps. On the other hand, all but one of Sunday’s five crashers used the same hard front as Bagnaia, while winner Viñales and second-placed Joan Mir used the medium front, so perhaps the hard wasn’t the best choice.

Viñales was understandably ecstatic with his first win since Malaysia last November and his first podium since July’s Andalusian GP.

“It’s important to feel strong again – I’m very happy to have taken the maximum from the bike,” he said. “I’m happy that I felt really bad with the bike at the start of the weekend, because that gave us the opportunity to improve. I need to calm down, especially when things don’t go as I want, but I always want to be at the front. We changed the balance of the bike a lot and I felt straight away much better. My confidence in the front was increased, so I could use all the potential of the bike in braking and in corners speed.

“The different settings allowed me to brake very late and keep a tighter line, which is very important because last Sunday I lost the race when Miller overtook me. So I focused all weekend on braking late and closing my line.

“This result is important for my team to take the pressure off. We improved a lot, so next time we need to pay attention to what we did this weekend.”

Is this a new dawn for Viñales? Only the next few weeks will tell.