So much for the 12 days of Christmas, here’s something much better: MotoGP’s top 12 moments of 2018 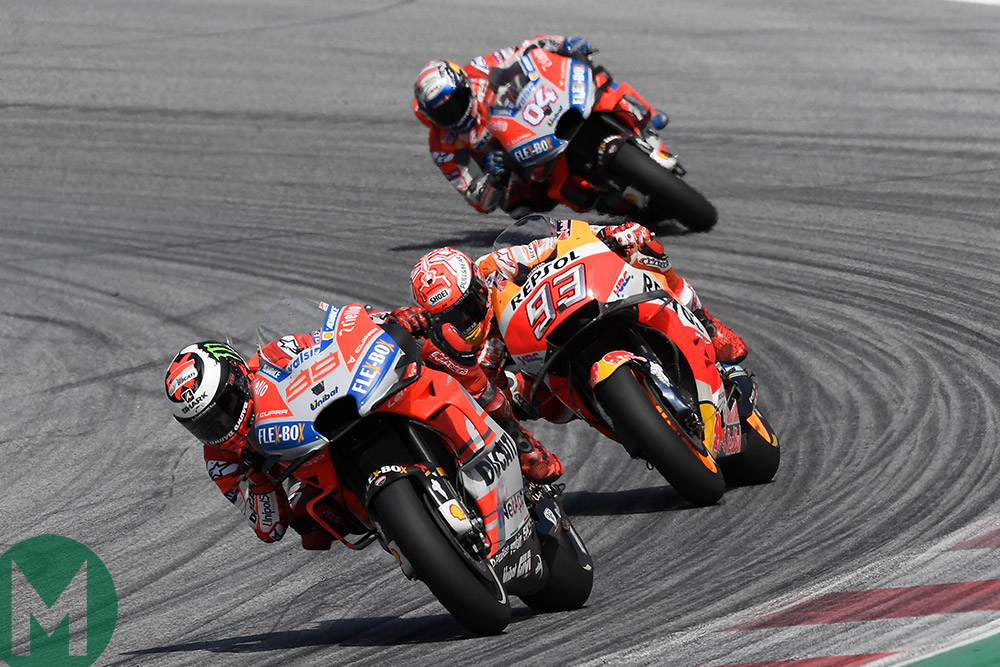 Moment 1: victory of the year

At the Red Bull Ring, Jorge Lorenzo dug deep inside himself and found his inner Marc Márquez, unleashing a fiery attack that included one of the best block passes ever.

This didn’t happen on the last lap, but with just over two laps remaining. And Lorenzo had been planning it for ages – right from practice. He made the pass at turn nine, the last-but-one corner, but commenced the assault at turns seven and eight, the track’s only left-handers, where Márquez usually reigns supreme.

On Saturday Lorenzo had watched videos of Márquez and others through these two corners to improve his body position and corner speed.

That kept him close enough to the Honda, so he could start the next stage of the attack: getting a mega drive out of the turn eight right-hander, so his front wheel was level with the RC213V’s rear and he had the inside line as they braked into turn nine. Once he placed himself between Márquez and the corner entry, his rival had to pick up and very nearly lost control.

They passed several more times before the finish, Lorenzo finally assuming control at turn three on the last lap, when a Márquez counter-attack went awry. At the flag they were separated by 0.170 seconds, making the Austrian GP the third closest finish of the year, after Qatar (0.027sec) and Thailand (0.115sec).

Moment 2: comeback of the year

Márquez never ceases to amaze. During Valencia qualifying he crashed at Turn Four (Nico Terol), rolled through the gravel trap and dislocated his left shoulder for the umpteenth time.

He staggered out of the gravel, hitched a lift back to the paddock, where his crew helped relocate his upper arm into his shoulder socket. Then he got back and his spare bike and raced out to complete the 15-minute qualifying session.

It took just six minutes and 18 seconds between the crash and his return to the track, where he got to within 0.130sec of pole, wonky shoulder and all.

Soon after Márquez completed postseason testing he had the shoulder (first dislocated in 2013) fixed by Dr Xavier Mir, MotoGP’s favourite surgeon. Mir was surprised at the extent of joint damage, which required complex surgery to fix. “I almost do not understand how Marc was able to win the world title like that,” he said. 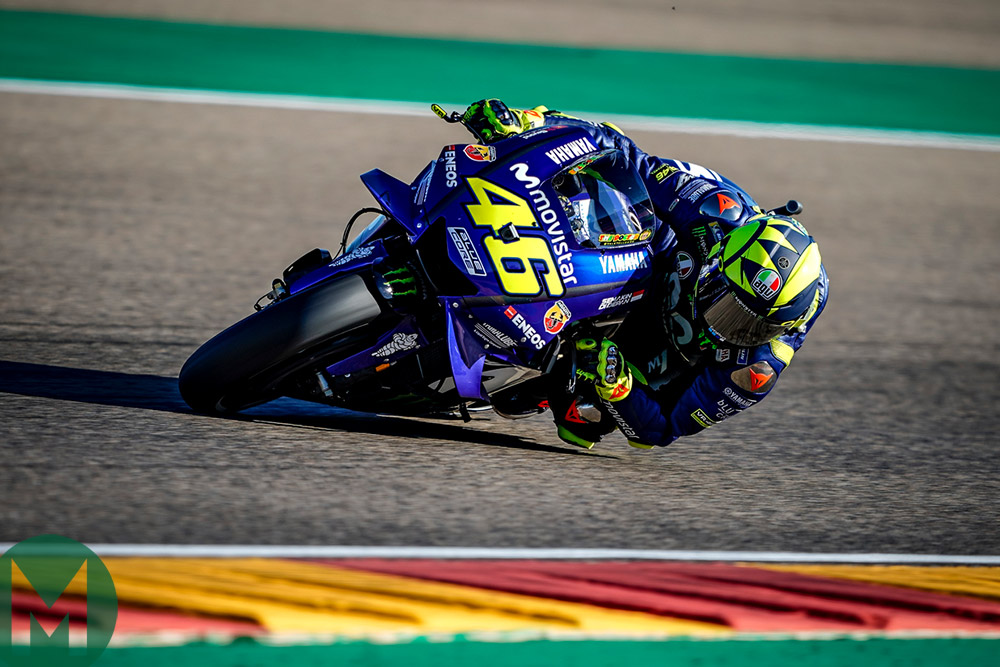 Not so a much a moment, more like eight months of suffering. Valentino Rossi had his worst-ever season in MotoGP in 2018, apart from his disastrous two years at Ducati.

Fundamentally, riding the 2018 Yamaha against the 2018 Honda and Ducati was like taking a knife to a gunfight. Therefore, I don’t go with the theory that Rossi is no longer fast enough.

It will be a miracle if he wins another title, but he’s still quick enough to win a race when things go his way and the bike works well enough. In other words, much will depend on Yamaha’s offseason development.

Below, a league table of Rossi’s average points score per race since 2000, when he entered the premier-class:

Moment 4: race of the year

Assen was an epic. It was, if you like, confirmation of several years of hard work by Dorna and its technical staff to turn MotoGP into unmissable edge-of-the-seat entertainment. This required little tricks like CRT bikes, which told the manufacturers that they no longer hold a monopoly on building motorcycles for the premier-class, so that Dorna could then twist their arms into allowing unified software and so on.

There’s almost certainly never been a premier-class Grand Prix with so many overtakes and there’s definitely never been a closer top 15: just 16.043sec separated winner Márquez and team-mate Dani Pedrosa in 15th.

On the other hand, Márquez did win Assen by 2.2sec – a gap he built up in just three laps.

Moment 5: Grand Prix of the year

October’s Thai Grand Prix wasn’t only the first MotoGP event in Thailand, it was also the first in a Buddhist nation.

There was a very special vibe at Buriram – a fun, relaxed atmosphere like a good music festival, with a huge fans’ village constructed next to the track, where the fun continued into the night. And the crowd was utterly unpartisan, a welcome relief from the fanatics who appear at some other races. Like the riders said: some fans in Europe could learn a thing or two from the Thai fans.

Moment 6: miserable weekend of the year

What a mess. What an embarrassment. On Saturday Tito Rabat had to abandon ship at around 170mph due to aquaplaning and ended up with his right femur broken into four pieces.

On Sunday tens of thousands of fans waited for hours in the rain and didn’t a see a wheel turn in anger. We were told that the results of a joint investigation into the debacle by Silverstone and Aggregate Industries (who resurfaced the track for 2018) would be published six weeks after the event. It is now four months after the event. Astonishing.

Moment 7: lucky escape of the year

One MotoGP TV broadcaster recently asked people to vote for their crash of the year, including the Márquez/Johann Zarco accident at Phillip Island, which had Zarco going down at around 180mph, just inches from Andrea Iannone’s front wheel. This crash wasn’t worthy of jokes.

If Zarco had gone right instead of left when he fell the outcome would have been hideous. Remember, that’s how Shoya Tomizawa and Marco Simoncelli lost their lives. No doubt, Zarco was a lucky man.

Moment 8: MotoGP vlog of the year

Like many on the 2018 MotoGP grid, Scott Redding knew he’d been sacked before the season was half done. No surprise then that he found another interest as the year went on. Redding’s vlogs from Thailand, Japan and other places were excellent, if you have a certain kind of sense of humour. Decide for yourself by finding them on YouTube.

Moment 9: chaotic afternoon of the year

It’s not often you get as much controversy packed into one race as was packed into this year’s Argentine GP.

First there was the grid chaos, with everyone apart from Jack Miller returning to the pits to change tyres, then there was Márquez stalling and restarting his bike, Zarco knocking off Dani Pedrosa, Márquez and Danilo Petrucci barging into Aleix Espargaro and finally Márquez taking out Rossi.

However, almost eight months after the event you realise that some of the emotions from the day were somewhat overwrought. 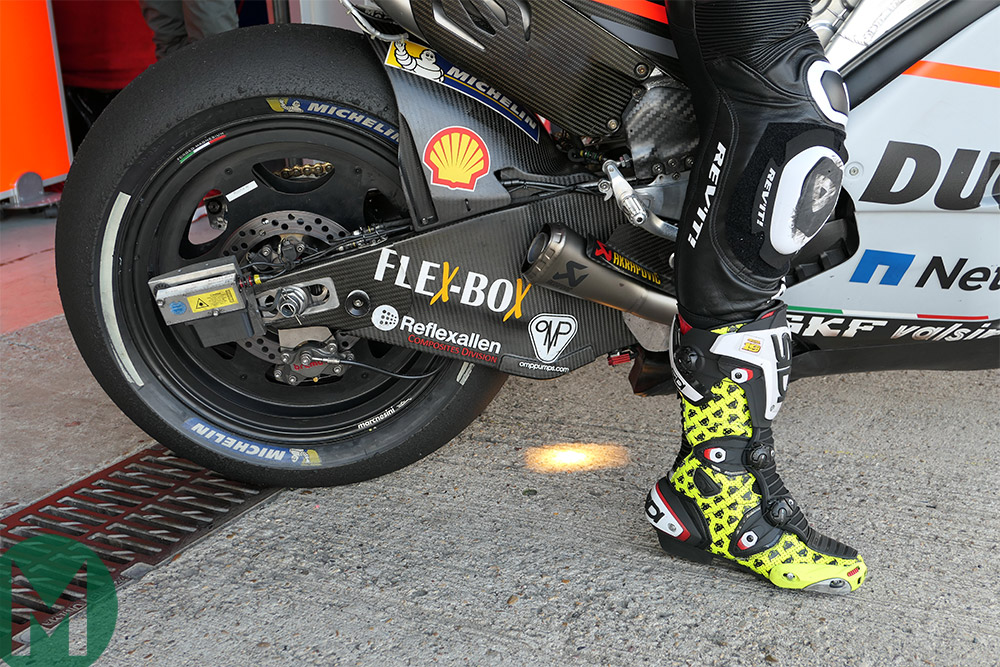 Moment 10: engineer of the year

MotoGP proves time and time again how one chief engineer/manager can turn things around for a factory: Masao Furusawa did it for Yamaha, Shuhei Nakamoto for Honda and Gigi Dall’Igna for Ducati.

Dall’Igna transformed the Desmosedici from paddock joke into contender in three years. However, Dall’Igna gets the prize for winding up his rivals with his endless run of trick little gizmos – most recently at Jerez, with the FUBAR parallelogram rear end and optical sensor (see photo), used to measure various aspects of machine dynamics, from geometry to slip angle and so on.

A pattern emerged at various MotoGP races during 2018, when the average winning margin was 2.1sec. The front group rode around together, riding fast but babying their tyres, then with five laps or so to go they pulled the pin and slugged it out to the finish – a bit like cycling, as Rossi put it.

But why were so many races like this? Because Michelin went softer with rear compounds at most tracks, which left riders short of race-long grip.

Moment 12: is MotoGP for sale?

Dorna is co-owned by Bridgepoint, a London-based private-equity business and CPPIB, a Canadian pension fund investment group. Bridgepoint recently hired asset-management advisers to look into preparing Dorna for sale. Rumour has it that CVC Capital Partners, Dorna’s previous owners and another private equity business, is leading the race to buy the company.

CVC owned Dorna more than a decade ago but had to sell the company after it purchased Formula 1, following a decision by the EU monopolies commission. Last year CVC sold Formula 1 to Liberty Media Corporation, so it’s now in a position to reacquire MotoGP. CVC sold Dorna to Bridgepoint in 2006 for around half a billion Euros.

Dorna is now worth a billion Euros, including debt. Whoever buys Dorna, let’s hope they allow the experts to keep doing what it does.