After several years running along at tick-over, Yamaha’s MotoGP project is picking up revs because factory bosses have realised they need to get serious if they are to beat Honda and Ducati, just like they did when they signed Valentino Rossi back in 2003.

Last week the factory team announced 2021/2022 contracts with Maverick Viñales and Fabio Quartararo, as well as a 2020 test-rider deal with its three-times MotoGP champion Jorge Lorenzo.

It is just as well that Viñales has signed a long deal, because even if Yamaha improves the YZR-M1 for 2020 the Spaniard isn’t convinced the bike will be ready to win the championship.

“If we have more top speed and better braking, we will at least be able to fight for race wins,” he says. “But the championship will be very difficult because Marc [Márquez] is on a really high level and the Ducati is very fast. But we have the opportunity to be there and to win races…”

Yamaha is currently fighting back from its worst crisis since it entered premier-class grands prix in the early 1970s. During the second half of last season the factory team finally seemed to find a good direction with the M1, helping Viñales to five consecutive top-four finishes, the first time he had managed that with Yamaha (in fact with anyone).

The number-one concern for Viñales is the YZR-M1’s poor top speed, which causes all kinds of other problems during races. Last season the M1 was often MotoGP’s fourth quickest motorcycle, behind Ducati, Honda and Suzuki.

“It’s very important to gain at least five or six [km/h] (3-4mph) because then we could use the slipstream of other bikes,” he adds. “Our acceleration traction is very equal to our competitors because last season we made a big step with the electronics, especially on the gas. We also improved the chassis, but the engine is a different story. Now it’s in the hands of Yamaha…”

Finding that missing top speed is a big ask, because it will need a significant increase in horsepower, something Yamaha has never found easy.

Viñales and Yamaha have two other problems to overcome: braking performance, which is exacerbated by the top-speed issue, and his M1’s sensitivity to changing grip conditions. 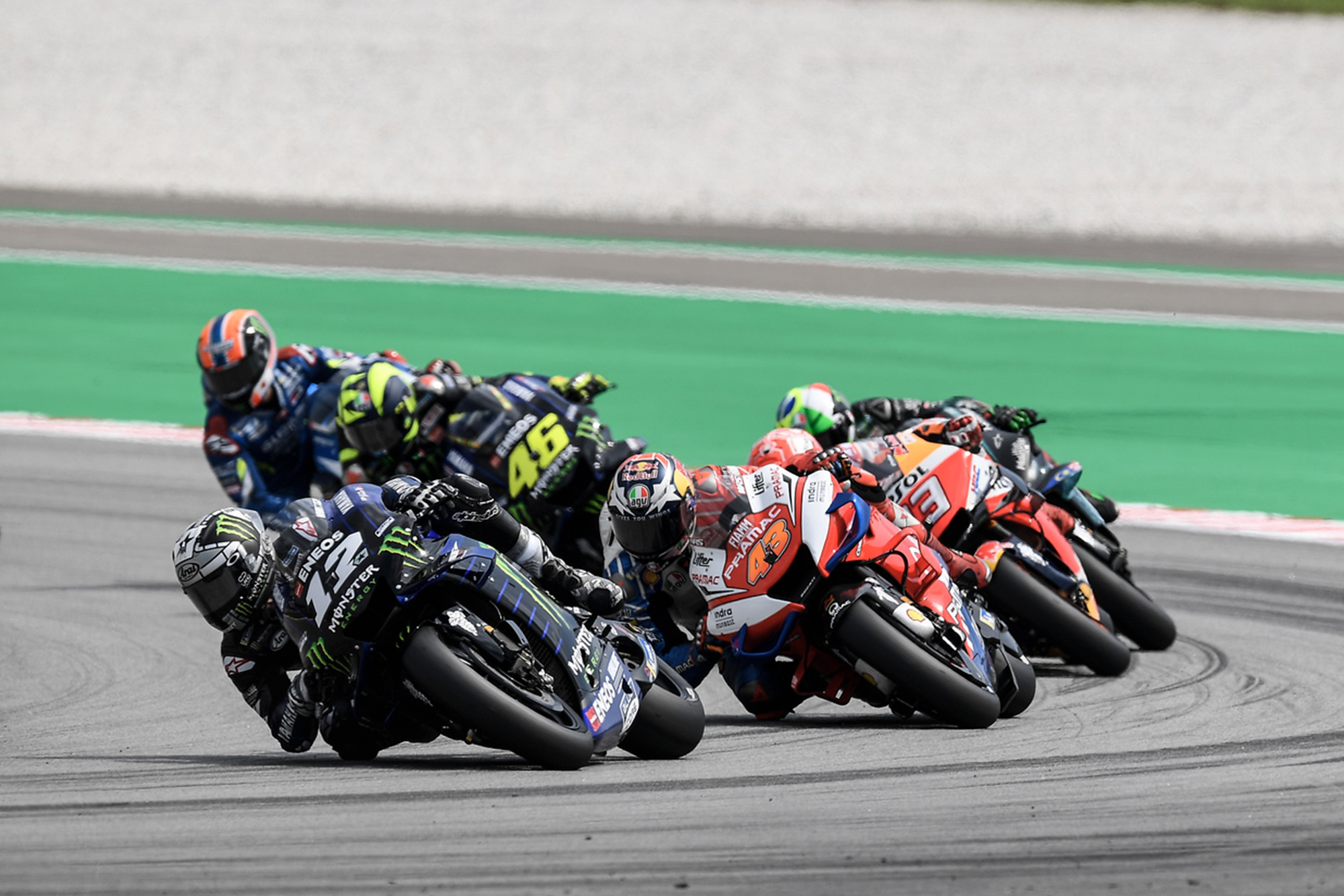 “Most of our problems come from top speed, because we have to brake so late to make up for our [lack of] top speed. If you have a fast bike you can ride more smoothly, more calmly and you have the opportunity to stress the tyres less. At the moment we need to get the bike to stop better. I don’t know if it’s me, but I cannot put the same load on the rear tyre as the other Yamaha guys, so I cannot stop the same.”

The braking issue and his bike’s inconsistency in different conditions are linked.

“Braking is the critical point with the Yamaha, especially for me,” he explains. “We need the rear tyre to stop the bike. As soon as I don’t have grip from the rear I need to change the engine-braking map, so sometimes we go all weekend with good settings, then when the race starts I need a different engine-braking setting.” 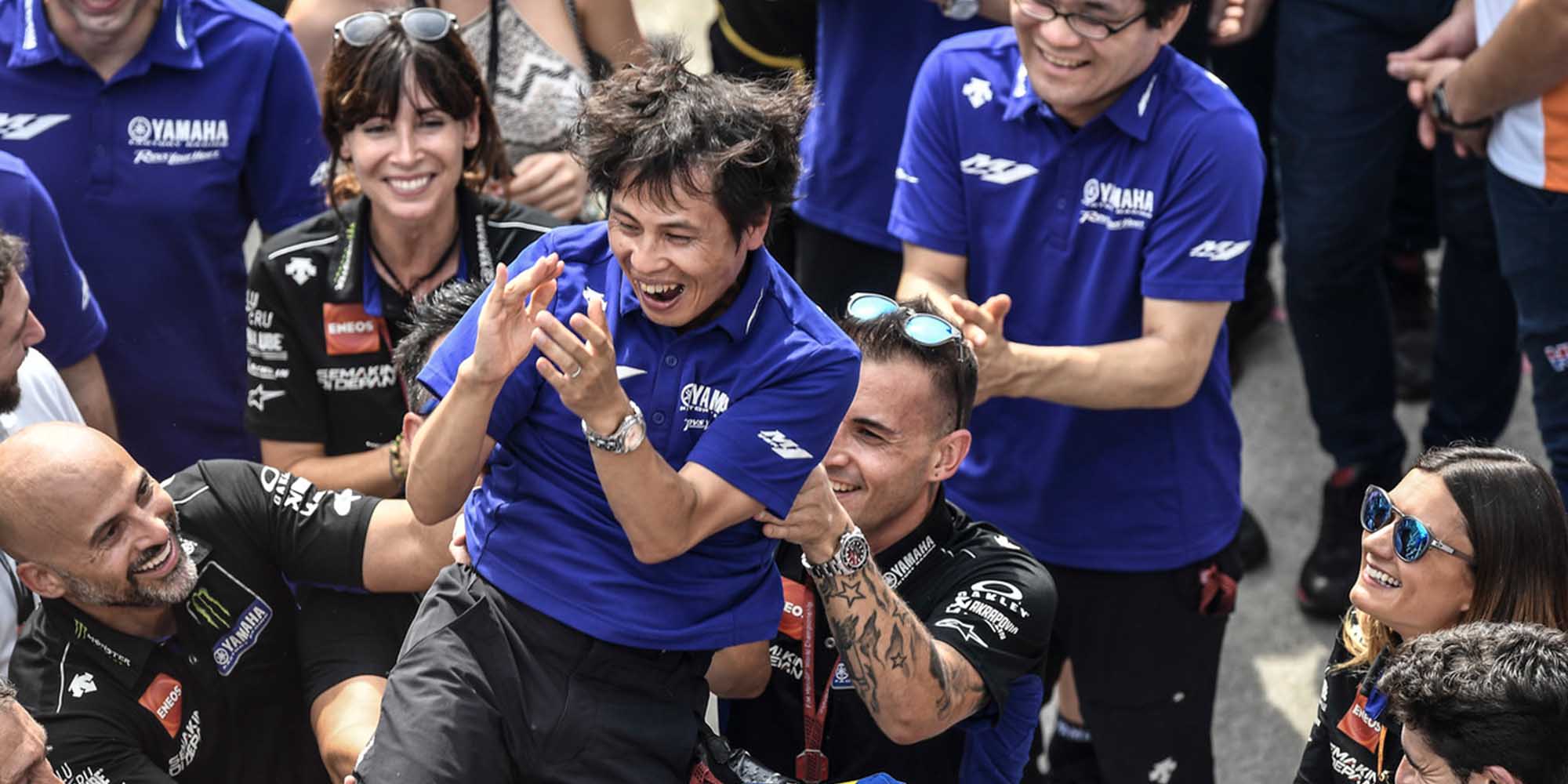 After four years of struggle, Yamaha is closing the gap on its rivals. Its new MotoGP project leader Takahiro Sumi tells us how Viñales' crew celebrate with Sumi after the…

Viñales usually has his biggest problems in the early stages of races, when the connection between tyres and asphalt is often different to practice, due to the Moto2 race reducing grip, or other changes to the track’s grip character.

October’s Thailand GP at Buriram was a case in point. During the first half of the race Viñales lost several tenths a lap to Márquez and Fabio Quartararo, until he was three seconds behind them after 12 laps. During the second half, he was consistently several tenths faster than the leaders, finally crossing the finish line 1.3 seconds behind winner Márquez. In other words, he could’ve won that race if it hadn’t taken him so long to adapt to the track conditions.

“The grip in the race is always different from practice, so I need to understand how to ride the bike and adapt my riding style. At Buriram I was locking the rear tyre and sliding all the time, so it took me quite a few laps to adapt, then I was very fast and closed the gap to the leaders. It’s very important for us to improve the engine-braking electronics because that’s where we miss in the early laps.”

“I think the Yamaha is more sensitive [than the other bikes] to changes in the track. Also, the bike needs to be ridden smoothly. If you try to be aggressive then you run into problems – the bike moves around and you don’t enter corners right.”

On the other hand, Quartararo didn’t seem to have the same problems last year, so Viñales recognises that he also needs to improve, which is why last summer he spent a lot of time between races riding a superbike-spec YZF-R1. “I need to be quicker to understand what the bike needs, so I tried many different riding positions to see if I can help the bike a little bit.”

Much of the 25-year-old’s hopes for 2020 rest on the latest M1 engine spec: will it have enough horsepower and will its negative torque character allow him to use the rear tyre to stop the bike? 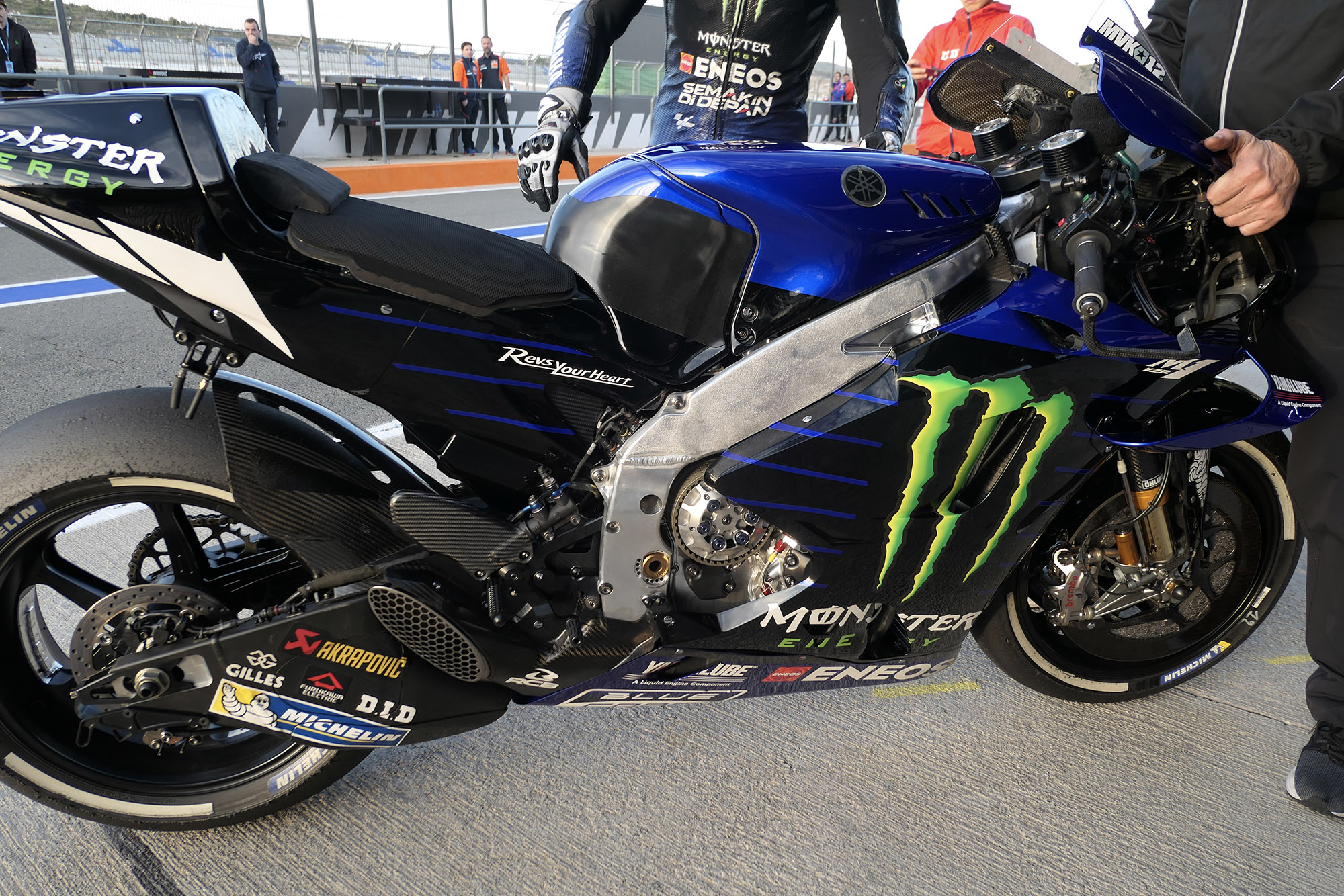 During preseason testing – which starts on Friday at Sepang – Viñales and his crew will focus on bike balance and engine-braking, with help from Yamaha’s new electronics engineer Marco Frigerio, headhunted from Ducati at the end of last season.

“Now we are at the point where we need one tenth a lap – which over 16 corners is nothing!” he adds. “So we don’t need to make big changes, because when there’s grip this bike is fantastic. When we go to the right track, like Assen [where last year he beat everyone by almost five seconds], where the bike is good and also when Michelin bring the right tyres for the bike, then the Yamaha is the best bike, without a doubt. You can say goodbye to the other riders and win alone. But when we go to tracks where we struggle, we struggle a lot, so we don’t finish second, we finish seventh or eighth. This is what we must improve.”

Last year Viñales scored his five consecutive top-four results between the British and Japanese GPs. This new-found consistency in performance wasn’t all down to the motorcycle. The youngster had always struggled to keep calm and maintain focus when things didn’t go his way, so during the winter of 2018/2019 he got some help from a sports psychiatrist in Doha, Qatar.

“I met a guy who gave me four or five ways to calm myself, so now I’m much more consistent. These systems work very well when I’m stressed, also in normal life!”

Even if Viñales can’t win the MotoGP title this year he will want to beat Quartararo to take him into 2021 as the factory’s leading rider. He will have a fight on his hands.