The factory team seems in disarray, so could Johann Zarco be Yamaha’s greatest hope for this year’s MotoGP crown? 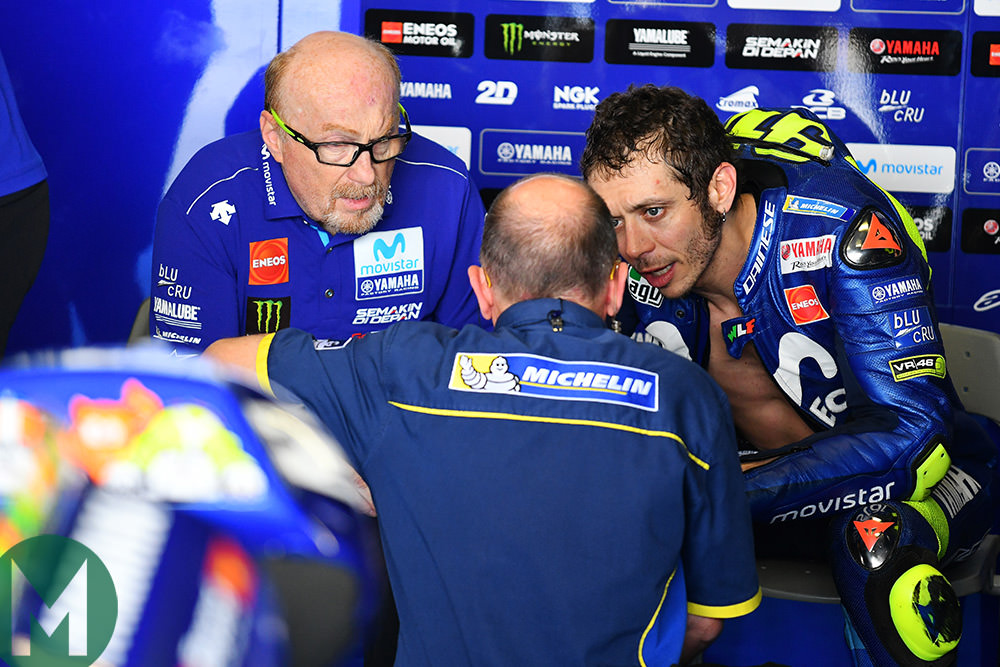 The Movistar Yamaha team seems to be digging itself an ever-deeper hole. Maverick Viñales and Valentino Rossi completed the second tests of the year in eighth and 12th positions. Their lap times weren’t a disaster, but more worryingly, both riders were confused by their inability to get closer to the front, which is always a bad sign.

On Sunday evening Viñales seemed so lost that it was hard not to feel a bit sorry for him.

Rossi is older and wiser, but even MotoGP’s ancient warhorse seemed somewhat defeated, which isn’t a good place to be during preseason testing. “The problem is clear, but not easy to fix,” he said mysteriously.

While his team-mate’s lap times are spoiled by corner-entry issues, Rossi’s are ruined by corner-exit problems. Yamaha has built a softer engine for 2018 in the hope of finding better traction, but in red-hot Thailand the nine-times world champion couldn’t find a good balance between traction and tyre temperature.

“We always suffer with the rear tyre,” he added. “For me the problem is that we can go faster if we can use a softer tyre, but that tyre is chunking, because the temperature is too high, so we must go with a tyre that’s a bit harder…”

So, what exactly is Yamaha’s problem? And how deep is this hole?

MotoGP is closer than it’s ever been, so even the deepest of holes isn’t that deep. Viñales’ best lap at the Chang circuit was just 0.6 per cent slower than Pedrosa’s. The differences in performance are therefore tiny in real terms, yet significant when it comes to results.

Usually, there’s no single solution to a problem in MotoGP. Yamaha’s issues are probably a mix of different factors: weight distribution, chassis flex, engine character, software mapping and so on. Right now, Yamaha engineers are working flat-out at Iwata, crunching the numbers and looking for a few tiny tricks needed to get them out of their hole before the first race, less than four weeks away.

And yet, it’s quite likely that the team’s biggest problem is that Viñales and Rossi are confusing themselves. When a rider keeps switching from one chassis to another he never gets to know a chassis well enough to extract 100 per cent of its performance. Perhaps they are looking too much at the bike and not enough at themselves.

Whatever problems the factory team has, they are not a concern to Johann Zarco, who left Chang second fastest, less than two tenths behind Repsol Honda’s Dani Pedrosa and more than half a second ahead of Rossi.

Zarco is using the 2016 YZR-M1 chassis he used last year, which Viñales and Rossi also raced at Valencia. In fact the 2016 chassis is the factory team’s 2015 unit, because the designated 2016 chassis (with rear tank) was never raced. And according to Zarco’s crew chief Guy Coulon, the 2016 is “very, very, very, very close” to the 2017.2 used during the early tests and is also the basis of the 2018 factory chassis. No wonder they are confused!

While the factory team flails around for answers, with one rider worried about the front and the other troubled by the rear, Zarco goes to work in his usual sober, methodical manner. The Frenchman is so humble and level-headed that anyone meeting him for the first time might guess that he works behind the till at the local bank, not aboard a 220mph MotoGP bike.

“I’m so happy that I can ride all the time better and better,” he said on Sunday afternoon.

No wonder then that Rossi and others believe that Zarco can challenge for the 2018 championship. Even he believes he can do it.

“With the experience of my two titles in Moto2, I must keep this sight in mind,” he says. “For sure, why not in my second year? Most of all I must enjoy myself on the bike, which gives me confidence I’ve never had with other bikes.”

What does Zarco do differently to make him so fast on such an old chassis? The best man to ask is Tech 3 technical genius Coulon.

“Johann’s working style is quite simple,” says Coulon. “First, he wants to feel that the front is safe. At that point he doesn’t care about the rear, because he can manage the rear. Then once the front is good, we try our best to improve rear contact. He never complains about any bike.”

Zarco always looks within himself for the lap time. He keeps his settings similar to keep the bike familiar, so he intimately knows its limits, then he tries different things with his riding technique to eke out a hundredth here and a thousandth there. This can mean changing his style at every corner, according to the condition of the track, the bike and the tyres.

He learned a lot in Moto2, which is all about looking inside yourself, because all the bikes are essentially the same. Also, it may be significant that Zarco, unlike his rivals, has never been spoilt by tailormade MotoGP electronics, so he’s always made his own traction control.

“Tyre grip level is quite low in Moto2, so although there’s not so much horsepower, the rider needs to be able to control it by himself,” Coulon adds. “If you want to have a good finish you need to keep your tyres in good condition. I believe that Moto2 was good schooling for this, but not so many Moto2 riders are able to understand this point. Johann has a very good feeling about what’s happening with the bike: front contact, rear contact and how to manage things by himself, like wheelspin.”

Zarco has many talents, but smoothness, sensitivity to conditions and the ability to adapt like a chameleon are probably his greatest.

“Sometimes he tells us, ‘ah, with this tyre and with this track surface I need to pick up the bike to have acceleration’,” adds Coulon. “Another time he will say, ‘ah, here I don’t need to pick up the bike so much because I already have traction when I pick up a little bit, and picking up too much will lose me some time’. I don’t know if all riders are able to feel this point. During the race the rider needs to feel the conditions and be able to change accordingly. Maybe he needs to feel, ah, I need to change my style or change the mapping or take care with the throttle and manage this point myself. It’s all feeling.”

Finally, a little history: a privateer bike and rider have never won the premier-class championship. During 69 seasons of 500cc and MotoGP racing the biggest title of them all has always been won by a factory bike, whether from Norton in Birmingham or HRC in Asaka.

“The man on the bike still makes the difference,” he says. “Johann knows what he can do, he’s very calm. And he enjoys the pressure; it’s like it gives him an extra boost, which isn’t something you often see. He’s not a bling-bling guy. He doesn’t care about five-star hotels and flashy cars. He is humble, but he believes he can win. But if you want to fight to be champion you need to be in a factory team, where you have a bike tailormade to your style and you get the latest evolutions.”

And what if Zarco is Yamaha’s main title hope when we get to Assen at the end of June?

“When a Japanese factory has a policy, it has a policy,” Poncharal grins. “We made the same request when we had Ben [Spies] and Pol [Espargaro] who were contracted by the factory, but it was never possible. It’s easy enough to understand – it’s very difficult for a factory team to swallow getting beaten by a satellite team.”

On the other hand, right now, the last thing Zarco probably wants is a factory YZR-M1.