Last weekend’s Argentine Grand Prix wasn’t the first to make headlines for the wrong reasons, but now is a good time to examine why MotoGP is like this 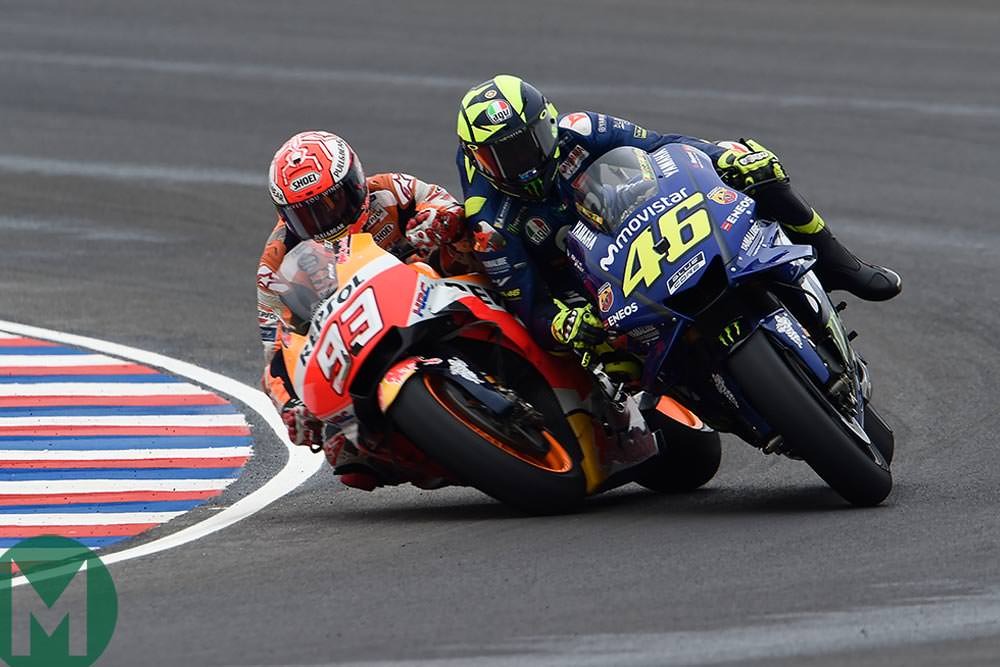 While Dani Pedrosa sits at home, nursing a broken right wrist and reflecting on another season ruined by an injury he didn’t deserve, this is a good time to consider where MotoGP is right now.

Why has the racing become so aggressive? Who should we blame, if anyone? Is it the fault of riders like Marc Márquez, Johann Zarco and Danilo Petrucci, who all thumped into rivals last Sunday in their desperation for a good result? Or is it all of them, because none of them are without sin and all of them will sin again when it suits them.

Yes, they must all share some of the blame, but there is someone else who stands accused of causing all this bumping and barging: you. Yes, you. And me. And everyone else who sits down in front of the television on Sunday afternoons, waiting to be entertained.

Humanity craves sensation. And the more we get the more we want, like junkies. These days we demand that sport provides the same kind of thrills as an action movie, with enough excitement to keep our synapses pinging until the next time.

Immediately after the thrills and spills of the Argentine Grand Prix I referred to the prophetic 1970s sci-fi movie Rollerball, which tells the story of a mean, vicious sport, which also involves motorcycles. By coincidence, the film is set in the year 2018, when the world is governed by vast corporations that have taken over from governments. (Obviously, this could never happen in the real world!) The corporate executives that own Rollerball live in gilded palaces and continually rewrite the rules to pump up the action and keep the fans coming back for more.

“They’ll change the rules until we skate on a slick of blood, we all know that,” says Rollerball’s biggest star Jonathan E.

Pretty much every kind of motor sport continually rewrites the rules to make the racing closer and more exciting, so that we keep turning on our TVs to keep the cash tills ringing.

A quick check of MotoGP’s results stats tells us just how much racing has changed since the first world championship races of June 1949. There have been more than 3000 GP races since then, but 20 of the closest 25 top-15 finishes across all classes happened in the last five years. Also, between 1949 and 2016 the top 15 finishers in the premier class (in dry races that went full distance) were separated by less than 35 seconds on four occasions. Last season alone that happened six times. Finally, in 1967 the average winner’s advantage was two minutes and five seconds; last season it was 2.2 seconds.

In other words, racers used to see each other more often in the paddock bar than they did on the racetrack, because the differences in machinery across the grid were huge. Now the differences are tiny, so the riders race around in each other’s faces and have to do some very wacky stuff to make the difference over rivals. This is not to make an excuse for the worst offenders but rather to examine the reasons behind the trend towards aggressive, physical racing, which carries across all three categories.

Grand Prix racing is so close now that two of the last three deaths were caused by fallen riders being hit by rivals following close behind. And Eugene Laverty’s horrific accident at the recent Buriram World Superbike was the same – Jordi Torres was right behind when the Irishman fell and couldn’t avoid hitting Laverty.

In fact, this is nothing new. About one million years ago I contested a championship called the Yamaha Pro-Am series, for which the company provided identically prepared RD350LC machines. Riders selected bikes by lucky dip, literally by picking ignition keys out of a helmet, not unlike Moto2, in which teams are allocated identically prepared CBR600 engines via a lottery system.

Pro-Am was vicious in the extreme, which, of course, made it hugely popular with TV viewers. There were numerous accidents; I recall cleaning tyre marks off my helmet after one mass pile-up. To even stand a chance of doing well you had to be downright mean and nasty. This is what happens when every bike on the grid has similar performance.

Rubbing is racing, we are told. Fans love the bump and grind, until someone gets hurt or their favourite rider comes off worst, but we are all part of the problem: the bikes, the riders, Dorna and all of us watching from the sidelines.

There is another reason behind all the crashes and collisions: safety. When Grand Prix circuits were borders by walls, lampposts and bus shelters, every crash might be your last, so you made damn sure you didn’t crash, or crash into anyone else.

The safer racing gets, and the more competitive it becomes, the more riders crash. This can be statistically proven. MotoGP’s crash rate continues to climb an upward curve as the sport gets safer and closer. The 2016 and 2017 seasons were the first in history with more than a thousand tumbles during the season. In 1997 the average was 33 crashes per weekend. By 2009 that number had risen to 40 and last year there were 62 accidents per weekend.

This is how racing works: if you make the tracks safer and the riding kit better then the riders will use that extra margin in search of faster lap times. These are tough people who aren’t afraid of crashing, so long as it won’t put them out of the race. The reduced chance of injury – for themselves and for their rivals – also makes most riders more relaxed about divebombing each other.

Is there a tipping point between danger and safety, when racing gets so safe that it becomes dangerous? Casey Stoner thought so. The 2007 and 2011 MotoGP champion was very much against the introduction of asphalt runoff, because he believed it encouraged riders to attack rivals with impunity, hoping that if it went wrong they’d most likely bump into each other, wobble onto the runoff and continue racing. In other words, a risk that riders wouldn’t even have considered decades ago is now a risk that’s worth taking, regardless of how much respect they have for their rivals.

Contact is now normal in MotoGP, it happens all the time and only occasionally does it create a furore. What’s the solution? Reduced runoff? Make the riders race naked? Of course not. I’m not sure what the answer might be, but this is where we are.