How much does a MotoGP bike weigh? The rules state that a MotoGP machine must weigh no less than 157 kilos, including oil and water, timekeeping, camera and data-logging equipment.

Add a rider at around 67 kilos (the grid average), plus riding gear at 11 kilos and 22 litres of fuel at 17 kilos. That makes a grand total approaching 260 kilos.

Now accelerate that mass to around 350kph/210mph and then decelerate it as fast as you can into Turn One at Portimao, or anywhere else where riders apply absolute maximum braking force. At recent MotoGP races Brembo engineers have seen negative g-force figures of 2g, which equates to about 1.2MJ (megajoules) of kinetic energy that needs to be dissipated through the brake system.

This is the first time this landmark number has been reached. The figure of 2g is only reached for brief periods of time, but it highlights the fact that braking forces are reaching rates barely conceivable a decade ago.

If bike and rider reach around 2g deceleration they effectively weigh half a tonne or thereabouts during maximum braking. And most of that force goes through the front tyre, which is useful because it expands the tyre’s usual straight-line contact patch by a factor of four, increasing grip, although in extreme cases the force can collapse the tyre. (By the way, at the apex of a corner the tyre’s usual contact patch is doubled.)

Of course, 2g isn’t reached all the time and this figure is nothing like the 4 to 5g that Formula 1 cars achieve during braking. The g-forces generated by MotoGP bikes during cornering and acceleration are also much less than in F1; 1.5g sweeping through corners and 1.2g on the gas, against about 6g and 3g in F1. 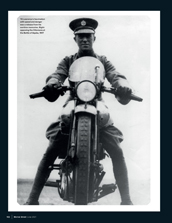 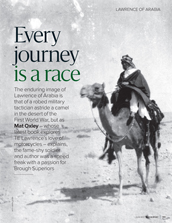 Lawrence of Arabia's love of speed

The burble of my exhaust unwound like a long cord behind me. Soon my speed snapped it, and I heard only the cry of the wind... The cry rose with…

But an F1 car has four fat tyres, plus it’s lower and longer and the driver is strapped in like a fighter pilot.

When a MotoGP rider brakes he takes most of his weight – around 80 kilos with riding gear – through his wrists, although he dissipates some of that force through his crotch, thighs, backside and feet, which are fully wedged against the fuel tank, seat and footpegs.

At 2g the rider’s weight generates a force of approximately 1570 Newtons, which is a lot. The world’s strongest weightlifters lift around 200 kilos. Of course, MotoGP riders aren’t lifting their weight, but the 1570 Newtons is equivalent to a rider resisting up to 160 kilos every time he uses maximum brake force, perhaps twice a lap, or 50 times during a 40-minute race. And obviously he reaches forces close to that much more frequently throughout the race. That’s an extraordinary feat.

It’s taken a long time to get here.

Carbon disc rotors (made from carbon-carbon – carbon fibres in a matrix of graphite) were first used by Team Roberts Yamaha at the 1988 British GP. They were so good right away that Wayne Rainey won first time out with them, because not only do carbon brakes make the bike stop quicker they also reduce the weight of the front wheel, decreasing gyroscopic effect, which makes the bike turn much quicker.

It’s the same when the rider releases the brakes and gets on the throttle. During heavy acceleration a MotoGP bike wants to loop the loop backwards, so the limit of acceleration isn’t horsepower or traction, it’s wheelies. Which is why factories spent so much time and money creating front-end downforce with their new-fangled aerodynamics.

What are the reasons for the big increase in braking g-force in recent years?

MotoGP aerodynamics engineers design their aero to increase downforce during acceleration, but the aero also helps when the rider is on the brakes. The strakes, wings and swingarm ‘swinglets’ make the bike more stable, the extra drag they create helps stop the bike and although they increase front load they don’t reduce rear-load, so they improve braking all-round.

This is why braking deceleration g-force has increased so much in the five years since MotoGP aero became a big thing.

At the same time engineers have rebalanced MotoGP bikes, taking advantage of the improved stability to allow riders to use the rear brake more, so the Michelin rear can help the Michelin front to stop the bike, which further increases deceleration g.

What do the riders think about the latest g-force numbers?

Not a lot, really, because the increases are incremental, so the riders adapt as they go along and adjust by spending more hours pumping iron in the gym.

“There’s still a certain limit you’ve got when it comes to braking,” says Ducati’s Jack Miller. “When you hit the brakes the bike is trying to push you over the front, so you really pop up out of the screen to use yourself as an airbrake and to use the wind to pull you back off the front of the bike.”

I’ve some experience of GP bikes trying to push you over the front. During the 1990s I had a couple of terrifying moments while testing Mick Doohan’s Honda NSR500 at Barcelona and Max Biaggi’s Aprilia RSW250 at Mugello. I wasn’t accustomed to the brick-wall stopping power of carbons, so the first time I braked hard I was thrown over the handlebars and ended up head-butting the front number plates, reading the #1 upside down. On both occasions I was sure I was done for, but I managed to stay on, more through luck than judgement.

The entire 22-rider MotoGP grid uses Brembo brakes, which makes the Italian company unique, because it’s the only technical solution used by everyone through choice, rather than according to spec regulations.

The plan is to test these discs again during June’s post-Catalan GP tests at Barcelona and introduce them during August’s Austrian GP at the Red Bull Ring, which is now the toughest circuit on brakes.

Last year Maverick Vinales famously had his brakes fail at Red Bull Ring. The discs and pads overheated, causing them to oxidise and disintegrate.

This happened because Vinales used the wrong calipers, which couldn’t stand the huge braking forces into the circuit’s first, third and fourth turns, which caused the whole braking system to overheat. Vinales chose the standard 2019 calipers, intended for circuits with lower braking stress, while everyone else used either the new-for-2020 finned calipers or the heavy-duty 2019 calipers.

Finally, how does all of this compare to what you do on the road? A few years ago road tester Simon Hargreaves ran data-logging on an Aprilia RSV4, equipped with road tyres and ridden around a racetrack by World Superbike champion Sylvain Guintoli. The maximum deceleration g-force they saw was 1.35g