How can this dominance be explained? Is it simply the fact that V4 engines make more horsepower? And if they do make more power, how do they do that?

Yes, they do make more horsepower. And mostly, it’s about the crankshaft. A V4’s crankshaft is shorter than an inline-four’s, so it’s stiffer and stronger.

It also creates less friction because it runs on three main bearings, not five, the minimum required by an inline-four. And with adjacent connecting rods on the same big-end journal it creates less rocking couple. Even better, a 90-degree vee has perfect primary balance.

There are also pumping losses, which is the power wasted in pumping air through the engine from intake to exhaust. Up to 300 litres of air per second flows through a 1000cc engine at 18,000rpm, and a V4 crankcase layout deals with that flow much better than an inline-four crankcase, so the V4 loses less power through pumping losses.

So, a stronger crankshaft, less vibration and better balance allow designers to push the engine harder for more revs and more horsepower, with the added advantage of fewer losses through friction and pumping.

The 90-degree configuration – used by Ducati in MotoGP since 2003 and by Honda since 2012 – has a further advantage. It allows designers to use a greater variety of unbalanced firing orders – big bang, long bang and so on – in their attempts to produce a more rider-friendly type of power and torque.

This explains why Ducati, Honda, KTM and now Aprilia use 90-degree V4s, instead of narrower-angle vees in MotoGP – it allows them to create more horsepower and a better kind of horsepower. 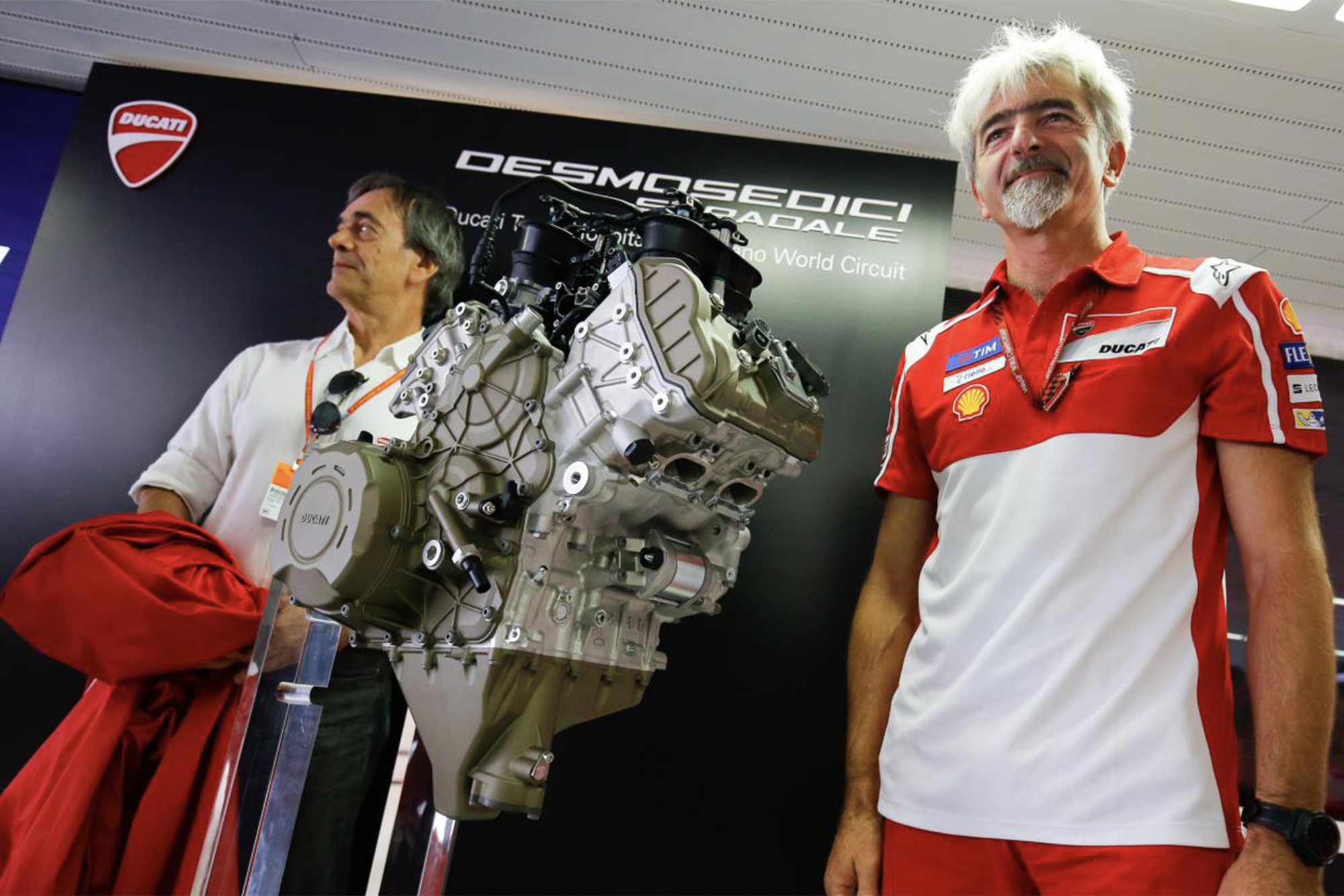 The 90-degree vee has been Ducati’s beating heart since Fabio Taglioni built the company’s first v-twin in 1970. But Honda wasn’t that far behind.

Shoichiro Irimajiri, who engineered Honda’s fabulous inline 250 six and inline 125 five of the 1960s, chose the configuration for the oval-piston NR500 GP bike a decade later, mostly to gain from reduced friction and pumping losses. Since then Honda has created many 90-degree V4s, from the VF750, VFR750, RC30, RC45 and NR750 road bikes to the current RC213V MotoGP bike.

Ducati’s V4, of course, uses desmodromic valves, which were first used successfully by Mercedes in its 1950s Formula 1 engines. Desmo valves maximise the time area of the inlet and exhaust valves, so Ducati is less restricted with cam profiles and can open and close valves further and faster for better breathing and therefore more power.

Of course, nothing in racing is all good – whether engine, chassis or electronics, everything is a compromise. You choose your way, then you maximise the advantages and minimise the disadvantages.

A 90-degree V4 has several negatives. It is long, which causes headaches for chassis designers trying to keep the motorcycle’s wheelbase short for quick turning. Also, its rear cylinders take up a lot of space and create a lot of heat in a crucial area of the motorcycle. This requires clever work on frame, airbox, exhaust and fuel tank design.

Engine designers can help here with clever design of internals – a compact cylinder head with shorter exhaust valves and so on can shave off vital millimetres in external dimensions. 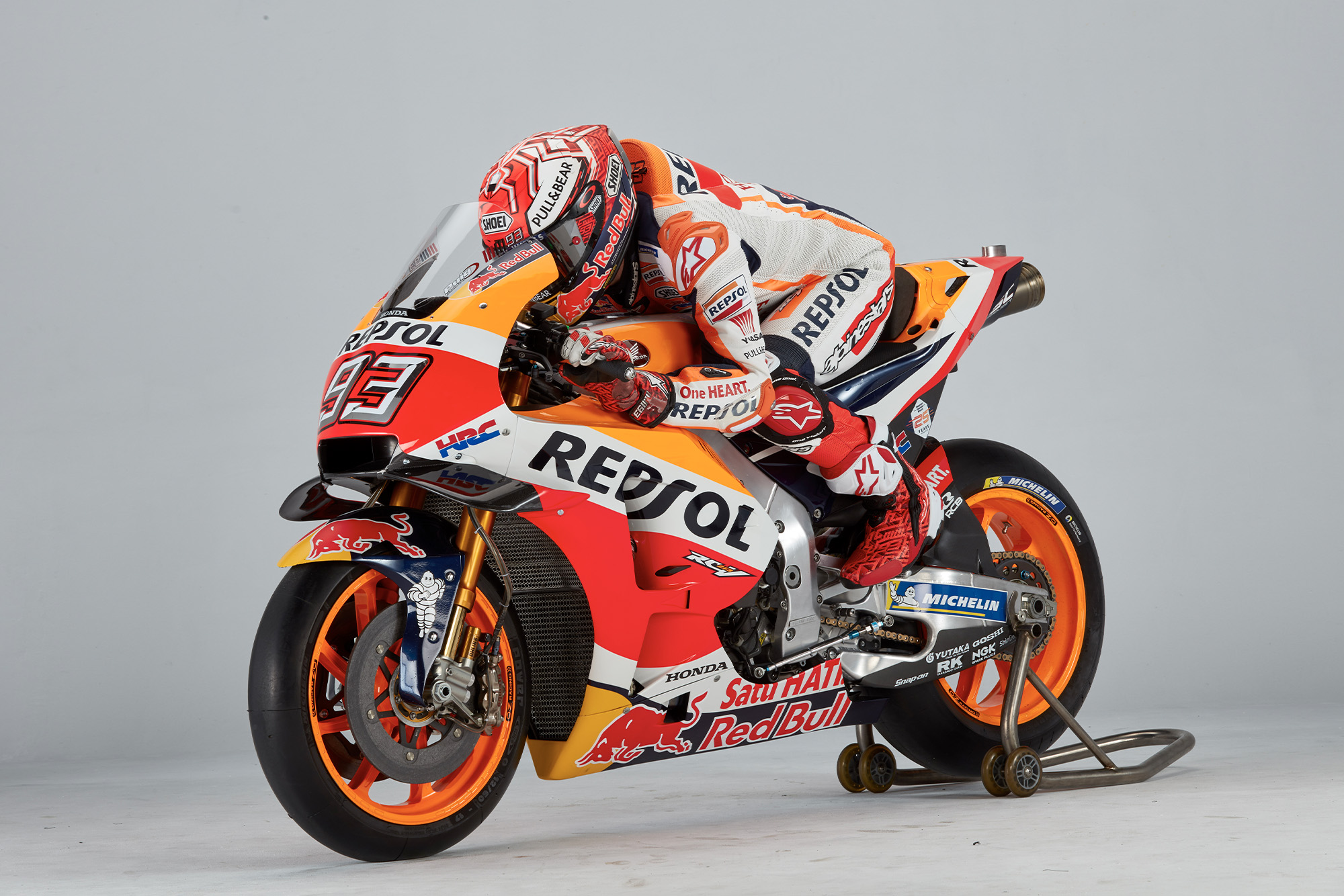 Then the engine needs to be mounted in exactly the right place in the frame. This is achieved in MotoGP by rotating the engine backwards by raising the front cylinder, which reduces wheelbase by a fraction and brings the crankshaft forward to put more weight on the front tyre for better turning.

These factors don’t really concern engine and chassis designers who choose inline-four engines, which are shorter and more compact in all the dimensions that really matter.

However, it is possible that inline-fours don’t only struggle to produce race-winning horsepower because of the length of their crankshafts but also because the engine’s greater width makes it difficult to use big-enough throttle bodies and induction trumpets.

Using larger throttle bodies and trumpets to get more power would most likely make the motorcycle too wide, which would be bad for aerodynamic performance. In theory a V4-powered MotoGP bike should be narrower than an inline-four, but this isn’t the case because radiator size is now the determining factor in overall width. 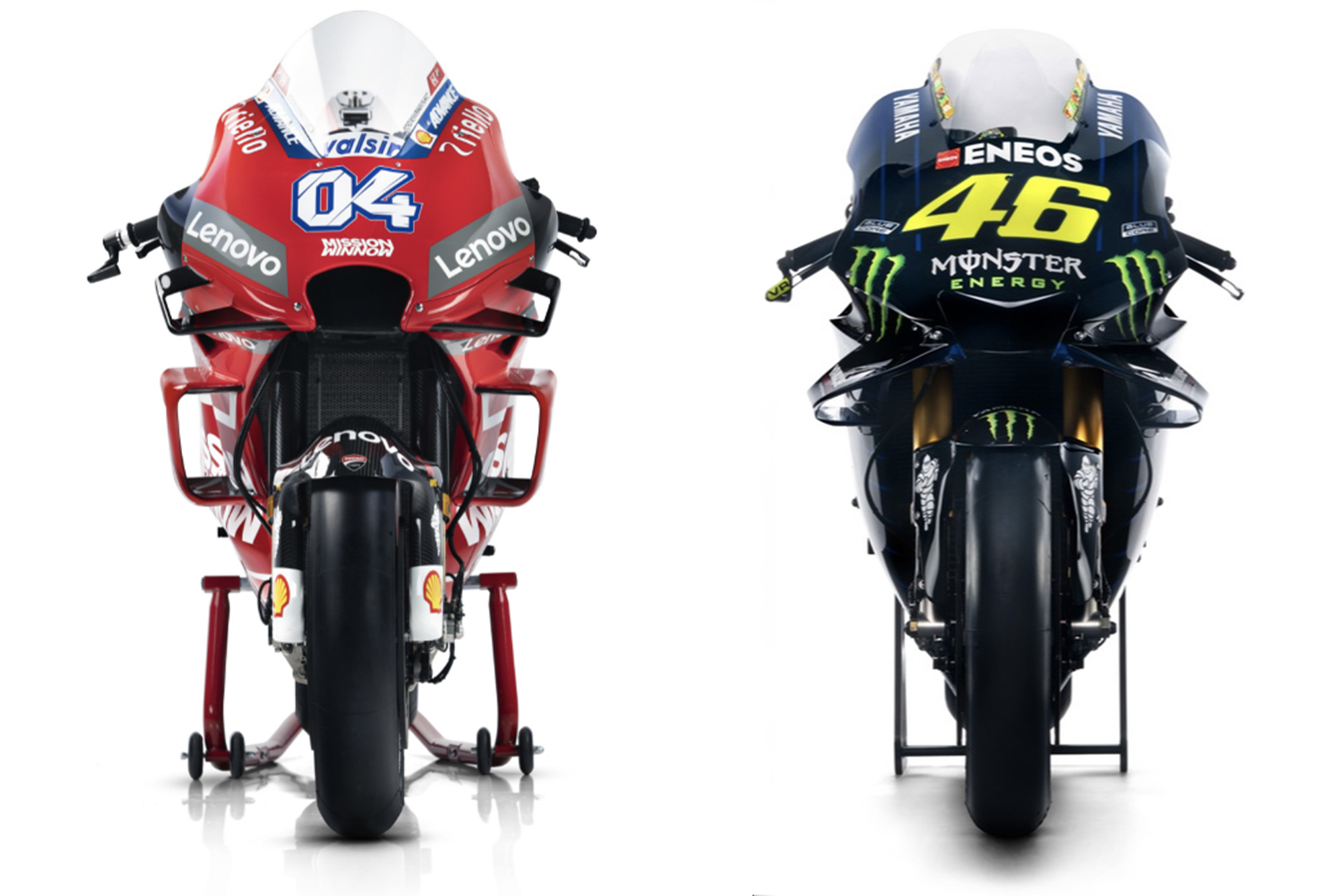 The easier packaging and mass centralisation of an inline-four MotoGP bike can make Yamaha’s YZR-M1 and Suzuki’s GSX-RR faster when track layout allows them to use their superior corner speed, but this doesn’t always help in race situations, because it’s easier to overtake on a straight than around a corner.

V4s don’t enjoy a huge advantage on the straights, but enough to make a crucial difference during a race. At last year’s Qatar GP the fastest V4 was Marc Márquez’s RC213V at 218.7mph/352km/h, about 2mph/3.5km/h better than the fastest inline-four, Joan Mir’s Suzuki GSX-RR.

At Mugello, the fastest V4 was Andrea Dovizioso’s Desmosedici at 221.6mph/356.7km/h, about the same difference over the best inline-four, again Mir’s GSX-RR.

This advantage helps a rider catch a draft off the bike in front. It also allows him to jump out of the draft and set up an out-braking move. It also gives riders more options in their tactics, because they’re not playing catch-up all the time.

Gaining metres in a straight line also helps race-distance performance, because the rider doesn’t need to hammer the front tyre so much on the brakes, nor destroy the rear tyre by getting aggressive with the throttle. And, of course, he doesn’t have to risk crashing by entering corners trying to regain the metres lost on the straights.

An inline-four, with its extra crankshaft gyro, is more difficult to divert from its trajectory when the rider wants to tip into a corner, but once the bike is in the corner that gyro helps the rider maintain his line. This is one reason inline-four MotoGP bikes are faster through corners.

It wasn’t entirely coincidental that Ducati started winning races when the Michelins arrived in 2016, after going five seasons without a victory.

However, last year’s Michelin rear compounds were stronger than the 2018 rubber and the 2020 rear tyre is all new and stronger still; so will it help the inline-fours close the gap?