I’ve always had special respect for British riders who break out of road-bike racing to have a crack at MotoGP.

Some Brits have worked their way into MotoGP through the Spanish system but only a very few have broken out from road bikes to make it in MotoGP: Cal Crutchlow, Sam Lowes and, judging by his recent form, Jake Dixon.

By the way, just because I hold a special respect for these riders doesn’t mean I don’t have huge respect for Jonathan Rea. For various reasons Rea chose to stay in World Superbike to make his own history. This weekend he should win his 100th World Superbike race and sixth world title. Say no more.

Crutchlow, Lowes and Dixon were fast on road bikes and could’ve stayed where they were and had rewarding careers but decided to roll the dice and take aim at the pinnacle. (Yes, even Rea agrees it’s the pinnacle.)

This was a huge risk for all of them, when they could’ve stayed where British riders are much more likely to make a success of their careers – this year there are ten factory bikes in WSB and seven of them are ridden by Brits. 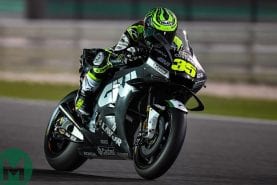 There was also a major financial cost to getting into MotoGP for Crutchlow and Lowes: Crutchlow’s first season in the premier class lost him half a million quid, Lowes’ move from WSB to Moto2 cost him almost quarter of a million.

Lowes did three years in World Supersport and was due to move into World Superbikes in 2014 when he decided to have a go at Moto2.

Dixon did two years of British Superbike before making the big switch to Moto2 last season.

It’s worth repeating why road-bike racing is the big thing in Britain, while racing on the Continent is all about GP bikes. This technical and cultural shift began with Britain’s early 1980s recession, which robbed British riders of the backing they needed to run Yamaha TZ and Suzuki RG GP bikes.

By the mid-1980s British grids were half-empty, so radical change was needed. Enter the first-ever Superstock championship, which had riders selling their exotic GP two-strokes and replacing them with much cheaper superbikes, like Suzuki’s first GSX-R750.

When World Superbike was launched in 1988 British riders were already into superbike racing, while most riders on the Continent were still racing TZs and RGs. And once Carl Fogarty started winning WSB titles, the route to success on the world stage became clear to other Brits.

When Crutchlow completed his rookie WSB season in 2010 he had BMW and Honda teams offering him £800,000 to stay in WSB he but ended up accepting £300,000 from Tech 3 for his rookie MotoGP season.

This was a risky, front-end heavy investment. Crutchlow came very close to failing in MotoGP. Midway through his first season he was so fed up with crashing and struggling that he wanted to return to WSB.

“Honestly, it was a really difficult time, then I had a massive fight with Herve [Poncharal, Tech 3 owner] at Laguna,” he says. “I wanted to go back to Superbikes. As a racer you have doubts in your head and I said to myself, ‘I just can’t do this’. Herve came into my motorhome and said something like, you’re being beaten by [Karel] Abraham! So I said, well, f**king go and sign Abraham! And then we had the argument. I remember him half leaving the motorhome and me half pushing him out.”

But Crutchlow is stubborn (he reckons he is 10 per cent talent and 90 per cent dogged determination) so he didn’t quit. And now he’s got his name in the record books, alongside Barry Sheene and Mike Hailwood. Plus, he reckons he’s many times richer than he would be if he’d stayed in WSB.

It’s also worth adding that he would probably be nursing a lot less war wounds if he had stayed in WSB. All three MotoGP classes are so viciously competitive that the crash rates are shocking.

Lowes and his twin brother Alex knew that racing 125s in Spain was the way to pursue their GP dreams, but their parents couldn’t afford £350,000 to fund two rides in the CEV (Campeonato de España de Velocidad) so they bought 600s and started along the road-bike route.

Lowes won the 2013 World Supersport title and had signed a 2014 WSB deal, but he had always wanted to be a MotoGP rider, so he coughed up a £230,000 penalty to his Yakhnich team for quitting his WSB job and went looking for a Moto2 ride.

“I could’ve earned quite good money in WSB but I paid to leave because I needed to be here – MotoGP is my dream and now it’s starting to pay off a bit,” he told me in 2015, shortly after his first Moto2 win at the Americas GP.

“The problem is the amount of experience I have compared to everyone else in this paddock is zero. I didn’t know many of the tracks, so it’s harder than people think.

“The level here is higher. There are a lot of faster people. Also, there’s a lot more infrastructure, and most of these riders have been riding at this level and with this mindset for a long, long time.

“It’s different riding in World Superbike; it’s a high level, but the rider can make the difference, whereas here the rider can make the difference but you have to look at everything: your training, your diet, you have to sit and look at the data all night and you have to look at every little thing on the bike. Every aspect has to be perfect to win. In World Superbike you can override a problem to beat someone else, you can have a fifth-place bike and you can win. But you can’t do that here.”

These are the challenges that face British former road-bike racers when they switch to GPs. It’s not just the bikes and the tracks, it’s the whole GP system, which takes time to understand. And usually British riders don’t have the luxury of taking their time, because most sponsors and teams come from Italy or Spain, so unsurprisingly they’re keener on Italian and Spanish riders.

Lowes has had more lows than highs since 2014, but this year with the Marc VDS team – arguably Moto2’s best outfit – he’s back on it. His victory at Le Mans last Sunday was his first victory since Aragon 2016.

It might not have been Lowes’ victory if Dixon hadn’t crashed out of the lead. The 24-year-old had a tough rookie season in Moto2 last year – just one 12th and one 13th to his name – and really struggled with going from BSB hero to GP zero.

“Coming from nearly winning the BSB championship to finishing right at the back and feeling like you’re an absolute licker isn’t easy; it’s mentally difficult,” he says. “I struggled a lot last year, especially with being depressed. It was super, super difficult. The biggest difference between BSB and GPs is that in GPs they don’t give a f**k – every lap is 100 percent.”

This year Dixon has come good, after switching from KTM to a Kalex, the chassis that’s won every Moto2 crown since 2013. The combination of a better bike, a year’s experience and time to adapt to the Kalex took Dixon into the front group for the first time at August’s Styrian GP. Now it looks like he’s got what it takes to stay there.

His tearful exit on Sunday – after losing the front and falling with just five laps to go – was a kick in the guts. But that’s racing. Most great champions agree that a racer’s psyche is his most important asset, so Dixon needs to forget about the past and keep looking to the future.

Meanwhile Lowes is 22 points off the Moto2 championship lead with five races remaining, despite missing the season-opening Qatar GP through injury. If he can stay up front and stay on board the 30-year-old has a good chance of becoming Britain’s first Moto2/250cc champ since Phil Read won the 1971 250 title, 49 years ago.

Of course, Crutchlow, Lowes and Dixon aren’t the only Brits who have tried the switch from road bikes to GP bikes. Eugene Laverty fought Crutchlow and Tom Sykes for the 2006 British Supersport title and moved into 250 GPs the following year – a much, much bigger jump than Supersport to Moto2.

But his 250s were never good enough to get anywhere near the front, so he moved into the safer havens of World Supersport and World Superbike, then tried two seasons in MotoGP, again on uncompetitive bikes, before returning to WSB on a factory-spec Aprilia.

There have many other Brits who tried from the start to race GP bikes but were forced by circumstances to move to supersport or superbike 1000s. Chaz Davies did everything in his power to make it in GPs but he never got the bikes he deserved, so he switched to road bikes, won the World Supersport title and enjoys a successful and lucrative career in WSB.

Scott Redding is another MotoGP refugee. Redding won a 125 GP, challenged for the Moto2 title and then struggled in MotoGP, without the best bikes, so he moved to WSB via BSB and is now a winning factory rider.

And then there are youngsters like Rory Skinner, who tried so hard to succeed in Moto3, but couldn’t get a ride, so he only had one option left: cheap-as-chips (relatively speaking) 600s. Skinner won this year’s British Supersport title and deserves to go much further. Who knows, further success on 600s could open the doors to Moto2.

The plight of Britons like Laverty, Davies, Redding and others only underlines the fact that Crutchlow, Lowes and Dixon running at the front of MotoGP is worthy of very special respect.