Joan Mir danced on the edge throughout Sunday’s race at Valencia, so much so that it looked like Suzuki team manager Davide Brivio might have a heart attack at any moment. But Mir and team-mate Álex Rins were able to ride that knife-edge quite happily. How come?

The Grand Prix of Europe was a perfect illustration of why Suzuki is ruling this year’s MotoGP world championship. There was no fully dry track time until morning warm-up, which was too cold for any meaningful work on bike settings and tyre choice.

Therefore everyone went into the race blind.

Especially in these circumstances you need a balanced, well-rounded motorcycle with a wide operating range, so that even if the tyres aren’t exactly right for the conditions the rider can still make them work. You also need a bike that’s gentle but not too gentle on its tyres, which is especially important in the Michelin era. Suzuki’s GSX-RR is that machine.

These same strengths have helped Suzuki through much of this Covid-affected season, which has been extra-challenging for engineers because many races have been run at unusual times of year with unusual track temperatures.

There are motorcycles on the grid that have more outright performance than the Suzuki, but those bikes only operate at their best across a narrower range of conditions, so their riders only get to extract all that performance when everything is just right. These bikes therefore produce more up-and-down results.

The GSX-RR doesn’t have the most outright performance but its wide operating range, its balanced, rider-friendly character and the team’s focus on all the details allow riders to take it to the limit pretty much every weekend. Hence Mir’s and Rins’ consistency, which is making everyone else look like they’re in a different championship.

MotoGP has published its provisional calendar for 2021, as it looks to return to normality next year. For now, a full season of racing is planned, beginning in Qatar on…

So far this year Mir has scored eight podiums, just two fewer than the ten achieved by Yamaha’s four riders.

The GSX-RR’s friendliness also helps the bike look after its tyres. On Sunday Mir and Rins were the only top-ten finishers who ran the medium front instead of the hard. This gave them a significant advantage, because softer tyres give better feedback and therefore more warning of impending doom, so riders can feel exactly what’s going on at the tyre/track interface, which gives them the confidence to push to the very limit.

Meanwhile during Sunday’s race, almost a third of the grid (six of 21 riders) most likely didn’t feel the limit, so they tripped over it and crashed out. KTM’s Pol Espargaro, the only man who could run the pace of the Suzukis, used the hard front slick, because the RC16’s character demands a harder compound front. He had to be very careful how he managed the tyre – if he didn’t do it right he knew he would either crash or be too slow.

The extra feel the Suzuki gives also allows its riders to be more accurate, which helps explain Mir’s stunning consistency. From laps four to 25 he was between 1min 31.9sec and 1min 32.2sec on all but three laps!

It’s impossible to attribute any of these machine characteristics to any particular aspect of the Suzuki’s design. But from the very start of the GSX-R project the bike was designed to be a well-rounded machine, rather than a weapon that’s super strong in some areas and inevitably less so in others.

The most important word in motorcycle racing is compromise, because at the sky-high level of MotoGP it’s almost impossible to improve a bike in one area without hurting it in another. Therefore Suzuki technical manager Ken Kawauchi and his engineers have made the GSX-RR MotoGP’s king of compromise, carefully blending together each area of performance. 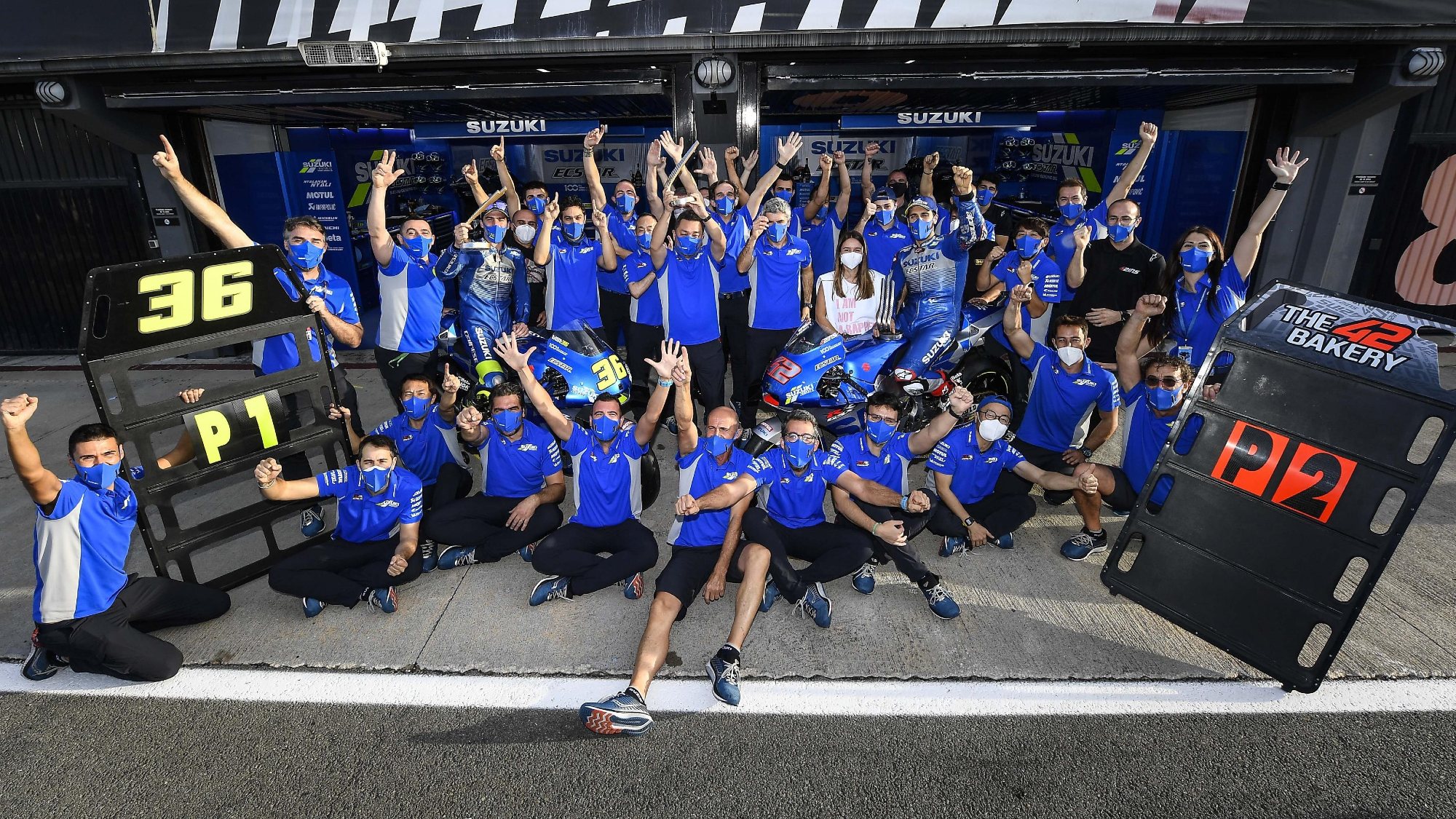 Since the GSX-RR did its first race in March 2015 Suzuki has carefully tweaked the bike, always working to find more race-long performance by refining the details, rather than looking for big performance gains here or there. You might say that the way Suzuki works and the way the GSX-RR works is the exact opposite of how Ducati and the Desmosedici work.

The GSX-RR’s only real handicap over the years has been a lack of horsepower. Year by year Suzuki has added a few horses here and there, only once taking a wrong turn. That was in 2017 when engineers at Hamamatsu increased crankshaft mass to improve corner-exit traction. In fact they went too far, so the bike was heavier to turn. That mistake finally convinced them that it’s better to keep taking small steps in the right direction than risking giant leaps.

Perhaps the final piece of the jigsaw is Michelin’s 2020 rear slick, which suits the inline-fours – the corner-speed bikes – better than it fits the V4s. The tyre’s grip allows Mir and Rins to carry more speed out of the corners, which gives the same benefit as a few extra horsepower, reducing the straight-line advantage of the V4s.

The bike’s overall strength and its ability to deal with Covid curveballs has put Mir and Rins first and third in the riders championship and Suzuki ahead in the constructors’ championship.

The last time Suzuki won the constructors crown was way back in 1982, when the factory ruled 500cc GP racing with its RG500 square-four two-stroke. Indeed the RG won the title seven years in a row, from 1976.

The RG is arguably the greatest machine in the history of GP racing, because it democratised the premier class for the first and last time. Suzuki equipped its official riders with factory RGs, but the bikes it sold to privateer riders often performed just as well. No wonder they were so popular – in 1977 all but four of the 32 points scorers in the 500cc world championship rode RG500s!

Yamaha’s illegal engines: how did it happen?

Yamaha won’t forget the 2020 season in a hurry – blown engines, illegally modified engines, stewards' sanctions and more have tarnished the factory’s challenge for the MotoGP title

Those were very different times. In 1979 an RG500 cost £12,000, the equivalent of £62,000 in today’s money. And with a few more grand spent on tuning the bike a privateer could compete for podium finishes. In 2020 MotoGP you’d be hard pushed to buy a year’s supply of brake discs and pads for that money.

Nowadays MotoGP is incalculably more complex. Instead of a rider and his mate trucking around Europe in a van and caravan it takes a couple of hundred full-time staff to compete for victory.

Which is why man-management is more important than ever. Improved machine performance doesn’t come from data, it comes from riders, technicians and engineers who know how to make the most of everything they’ve got and work together in harmony.

“Suzuki work very well because I think [Davide] Brivio has made a fantastic job, fusing the work from Japan with some very strong work at the team in Italy,” says Valentino Rossi. “Especially he’s able to convince the Japanese to work together with the Europeans and Italians and they make a very strong team. It’s not the case that the bike is so fast now – I think they’ve improved with this strong work.”

Brivio was the man who initiated Rossi’s move to Yamaha in 2004. There’s no doubt that he learned a lot while working with Yamaha engineer Masao Furusawa, the man who brought the factory to the forefront of four-stroke MotoGP racing, by getting the best out of his manpower and machinery.

Finally, without taking anything from Suzuki’s performance we have to remember that Marc Márquez isn’t there. If the Suzuki is the machine with the widest operating window then Márquez is the rider with the widest operating window. The reigning champion can extract 100 per cent of a machine’s performance even when bike isn’t right and the tyres aren’t right. That’s why he’s been so dominant during the Michelin and Magneti Marelli era, when bikes are rarely perfect.