No one saw which way Maverick Viñales went on Sunday. For once, everything was right: rider, bike and tyres. But there was more to Yamaha’s domination of the 2019 MotoGP Malaysian Grand Prix 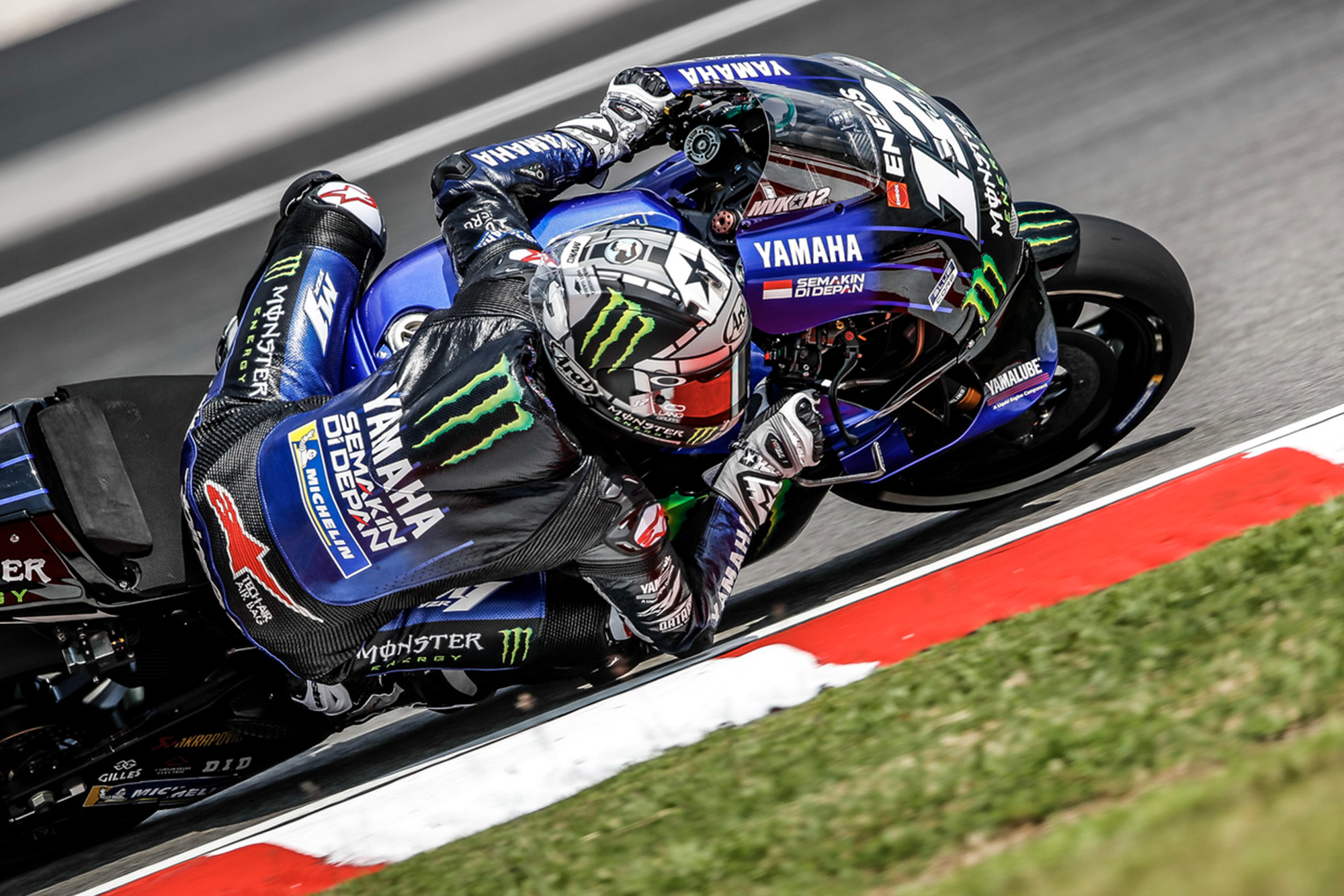 “At tracks where the bike is good and Michelin bring the correct tyres for the bike – goodbye – the Yamaha is the best bike, without a doubt,” Viñales told me a few weeks back. “But then at the tracks where we struggle, we struggle a lot; so we’re not second, we’re seventh or eighth. This is what we need to improve.”

And this is what Yamaha has improved. The last time a Yamaha MotoGP rider scored so consistently well was back in early 2017 when Viñales ran away with the early rounds of the championship, before him and his YZR-M1 went AWOL.

Since then it has been grimness unknown by Yamaha since it first joined the premier class in the early 1970s: just two wins from 35 races between July 2017 and October 2019.

So what has changed? What’s the big breakthrough?

Yamaha has made a fascinating discovery with its YZR-M1, uncovering a go-faster secret that will stun the rest of pit lane.

I’m lying, of course. Yamaha’s secret is anything but spectacular. Quite the opposite, in fact.

When Yamaha dug itself into a hole after the start of MotoGP’s new technical era – Dorna control software and Michelin tyres – the factory mostly kept digging. That often what happens when things go wrong: you try so hard to make them better that you make them worse.

“When Maverick first arrived in 2017 he was very fast at every circuit, then when he struggled we tried to improve the setting, but sometimes that made confusion,” says Takahiro Tsumi, Yamaha’s MotoGP group manager.

Remember all the revised frames and chassis parts that started arriving to help Viñales and team-mate Valentino Rossi regain their speed? They did nothing. Invariably Johann Zarco was faster on his year-old Yamaha, just like Fabio Quartararo this year. There’s a lesson in there somewhere.

“If the bike doesn’t change every weekend, Maverick can concentrate on adapting himself to each situation,” adds Tsumi, who has helped transform Yamaha’s fortunes since taking control of the project at the start of 2019. “Finally after this year’s Barcelona tests [in June] we found a good base setting, so now he can get back his feeling on the bike.”

This is no startling revelation. The biggest go-faster secret of them all is familiarity with the motorcycle. If you know your bike very well you will know how it’s going to react to a slide or a wobble before it slides or wobbles, so you’re already riding around the problem as it’s happening. That means you can happily push beyond the limit without losing control because you are always ahead of the situation. This also improves your skills and your ability to live on the edge – the essential factor to winning races.

This is why Viñales has rejected all Yamaha’s recent chassis updates, like the carbon-fibre swingarm, because if you keep adding parts and changing parts you will never get that feeling of intimacy, of oneness with your motorcycle.

“For the second half of the season I’ve kept the bike the same,” added Viñales, who won his first race of 2019 at Assen, two weeks after those tests at Barcelona. “Now I’m trying to improve myself, so even if new items arrive I keep the same bike, trying to be at the best level, trying to understand the bike better.” 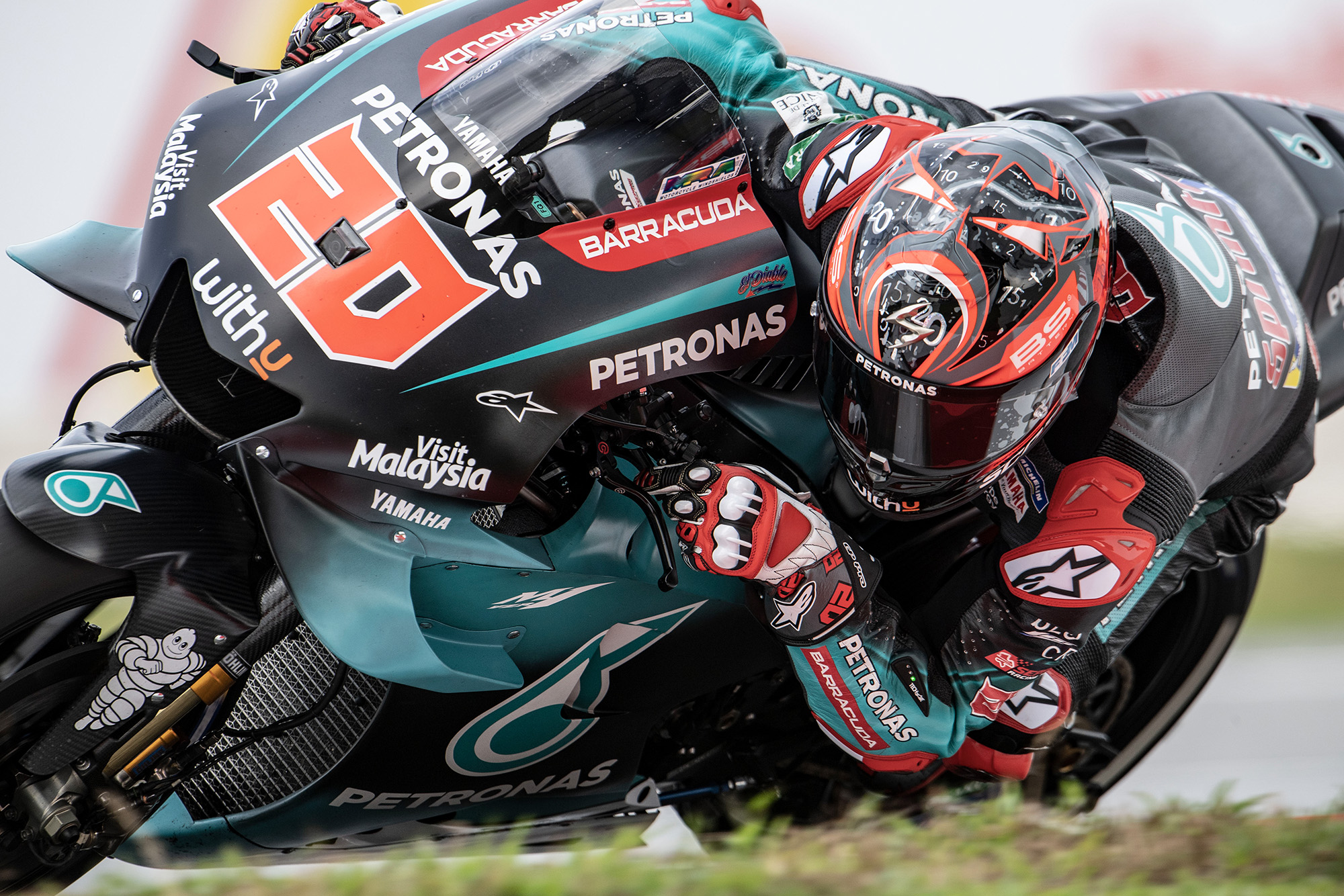 Also, there is no doubt that Quartararo – who at Sepang took the fifth pole position of his rookie season – has given Viñales and the entire factory Yamaha team a kick up the backside.

“If you have a Yamaha in front it’s always good to help you understand the way to ride the bike and how to improve,” added Viñales on Sunday. “Fabio suits the Yamaha really well, so he can push so much. You study and you learn.”

But once Viñales had analysed the Frenchman’s secrets he now focuses more on himself and less on those around him, both inside and outside his own garage.

“Over the last five or six races I’ve been very concentrated on myself. We don’t try to compare so much with the others. We follow our own way and it seems to work.

“Honestly, the step we made was by keeping the bike the same and working very carefully with the electronics. I’ve tried to understand the best way to ride the bike, how to be more at one with the bike and how to push it to the maximum.”

Quartararo was favourite to win at Sepang but he had a front-tyre problem: the tyre got too hot, the pressure soared and he had no grip. He slunk home seventh, 17 seconds behind Viñales. The Frenchman was as calm as can be expected in the circumstances, because he knows these things happen, so he knows there’s no point in getting mad when they do and he knows that his time will come.

Quartararo has helped Viñales and Yamaha by finding a new way to ride the M1 – somewhere between the silky smoothness of Jorge Lorenzo and the ragged aggression of Honda’s Marc Márquez.

“Of course you need to be smooth with the Yamaha, but there’s a balance between smooth and aggressive,” said Quartararo at Sepang. “You need to find the right balance to go fast with this bike and I think we’ve found it.

“It’s strange, but every time I ride the bike it’s harder to make the lap time. In the beginning it’s not easy, but to make a good lap time is okay. But then to be really, really fast is really difficult. You need to be more aggressive but also really smooth. This is why I say it isn’t easy, because to be aggressive is easy, but if you are really aggressive with this bike then the lap time doesn’t come, but if you are really smooth you make a good lap time but it’s not fast enough.”

Like everything in racing it’s a balance. A MotoGP rider must combine the talents of a heavyweight wrestler with those of a ballet dancer. It’s a bit like being Hulk Hogan and Rudolf Nureyev in the same body – not an easy ask. 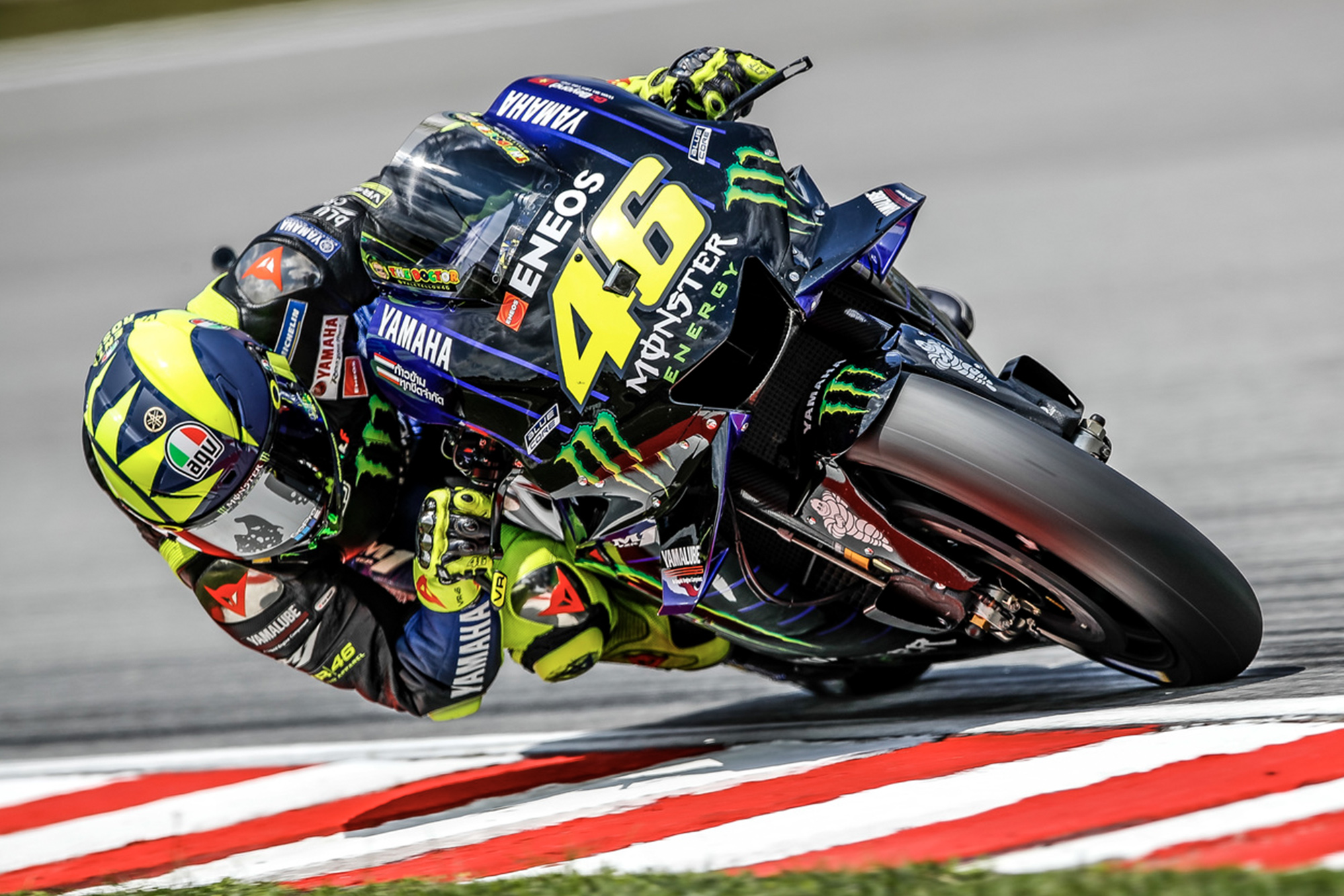 Of course, Sepang winner Viñales, pole-sitter Quartararo and lap-record-breaker Rossi had something else on their side over the weekend.

Yamaha hadn’t won at Sepang since Rossi beat Repsol Honda’s Andrea Dovizioso by a fraction of a second in 2010. This time the M1 worked superbly, because the bike’s basic configuration suits the layout and because Yamaha has made big improvements in electronics and power delivery. Hence the all-Yamaha front row.

“The Yamahas are so stable on corner exit – they don’t spin and they don’t have suspension pump,” said Pol Espargaró, who was in a world of trouble on KTM’s RC16. “The bike is super-stable – when grip is low this is the key.”

Ducati’s Jack Miller agreed. “You spend a lot of time turning and a lot of time on angle here,” said the Aussie, whose race also suffered from high front-tyre pressure. “The third sector [Turns Five to Nine] is my worst by far and that’s the kind of sector where the Yamaha excels. We’ve got big horsepower and the Honda has got big horsepower, but the Yamaha can get onto the straights quickly, especially from that long right-hander before the back straight.”

Even Marc Márquez was impressed. “The Yamaha has extra grip on the exit of corners,” said Sunday’s runner-up, who might’ve given Viñales more trouble if he hadn’t been pumped full of painkillers and anti-inflammatories after his massive highside in qualifying. But the world champion’s injuries weren’t bad luck, they were the result of a big mistake.

Viñales was in a huge hurry to grab the lead in the first lap, so he could use his own lines to carry lots of corner speed that took him onto the straights faster than anyone else. His top speed might not have been much (198.5mph/319.9kmh against the Honda’s 202.1mph/325.4kmh and the Ducati’s 205.1mph/330.2kmh), but he was fast down the straights.

Compare his Sepang ride to his futile battle with Dovizioso’s Ducati at Motegi and also Rossi’s duel with Dovizioso at Sepang. On both occasions the M1 riders were unable to use their corner speed to get onto the straights at a good rate because there was always a GP19 stopped in front of them.

The question now is can Viñales keep his momentum rolling into Valencia and more importantly into 2020. He seems hopeful…

“We now know how to understand the bike and work with it very well – it took time but we are on the right way,” he added. “The big step we’ve made this year is with the electronics, especially on the gas. So now we are good on the gas and on corner speed. Braking has been our inconsistency, but now we are understanding that too.”

The Sepang winner’s only real concern remains the first few laps of each race, when grip conditions often change from practice and morning warm-up, due to Moto2 rubber, track temperature or whatever.

“In some races it takes me six or seven laps to understand the way and to adapt my riding,” he said. “Many times we’ve lost everything in the first laps, so this will be one of our main objectives for 2020 – to improve the start and to have a bit more power.”

More to follow from Sepang in Wednesday’s Malaysian GP round-up. MotoGP blog on Tuesday, as usual