Tyre temperature and pressure are everything in motor sport – and not only in MotoGP. In Formula 1, or any other category where the stakes are high and the lap times are close, half a degree here or half a psi there can make the difference between victory and defeat.

Formula 1 engineers fuss over their tyres as much as MotoGP engineers do. The only difference is they have more money to spend on fussing about with temperature and pressure.

F1 teams have been using special wheel rims for a while. These rims feature fins, ribs and ridges inside and outside that increase surface area and air flow to get rid of heat more efficiently, not so much to cool the tyre itself, but to cool the air inside the tyre, which affects tyre pressure, which determines how the tyre performs and degrades.

Now, with front tyre performance especially critical on MotoGP bikes, it’s surely only a matter of time before similar rims appear in MotoGP.

The front tyre (as I never tire of saying) is the single most important part of a race bike, and Michelin’s MotoGP front slick is very susceptible to changes in heat and pressure, which affect tyre profile, which affects the contact patch, which affects turning and grip.

In other words, front-tyre pressure has a huge impact on lap times and race times, so if you can keep your front slick in its temperature and pressure sweet spot you will have an important advantage during qualifying and the race.

The problem now is two-fold – the racing is closer than ever, so riders are packed closely together, and a 300 horsepower 1000cc engine produces a lot of heat. This is why riders find themselves in trouble when they’re stuck in traffic.

MotoGP front-tyre pressure is so critical that bikes now feature warning lights on the dash that tell the rider when the pressure has increased enough to ‘balloon’ the tyre, which most importantly reduces grip. 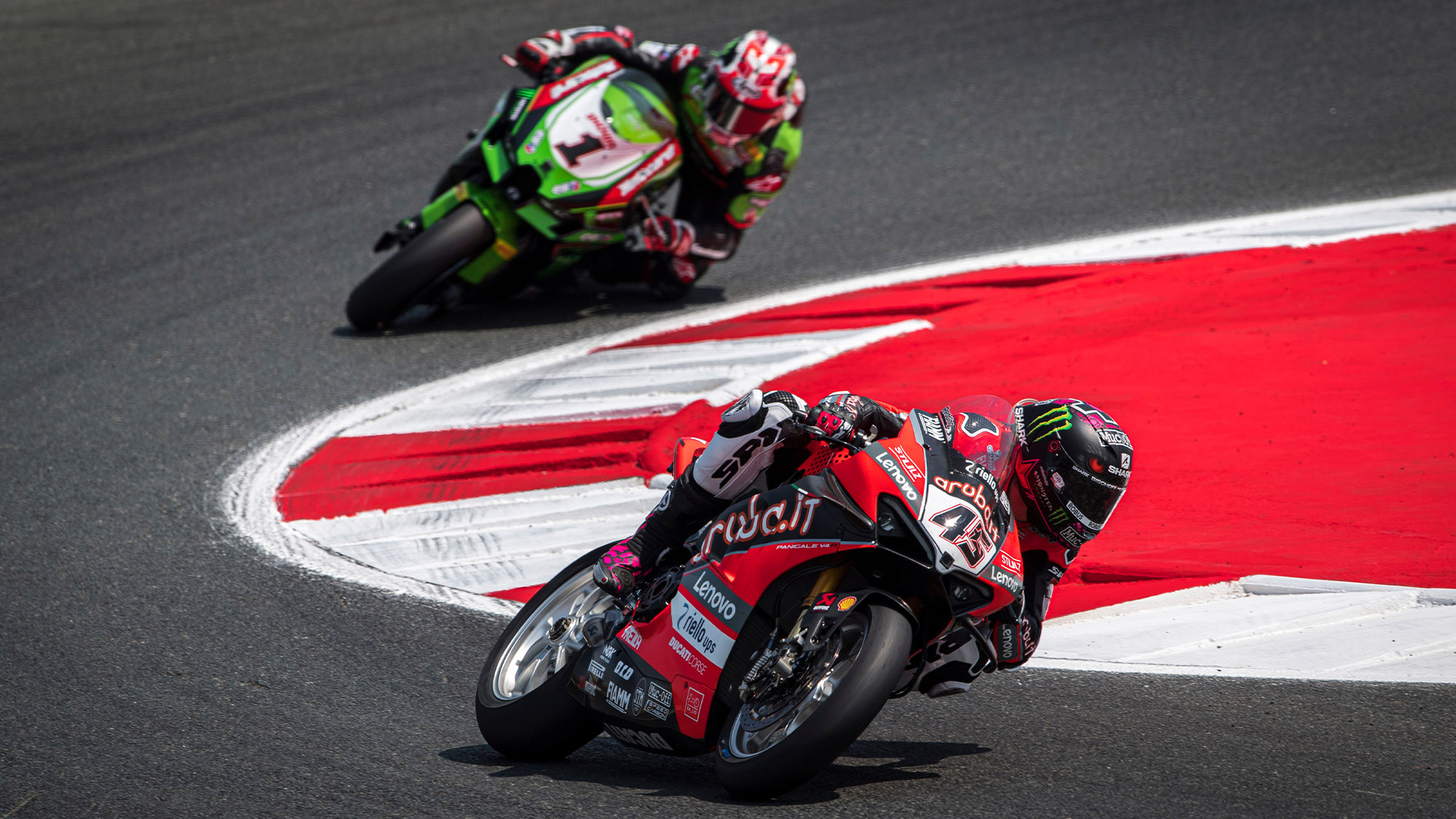 When that light comes on the rider must adapt his riding technique to reduce stress on the front tyre, by changing how he brakes and how he enters corners, in the hope of reducing the tyre’s temperature and pressure. Once the warning light goes out he can press on again. Modern-day MotoGP riders have a lot to think about.

“It’s becoming very complicated, especially with the front tyre,” one engineer told me. “Even half a psi of pressure makes a difference.”

Some MotoGP and World Superbike teams are already working in this direction. Ducati has what look like unpainted wheels to encourage heat loss from the rims. In fact the rims are painted with a clear paint that increases heat radiation from the rim. Other factories are now following suit.

In MotoGP the problem of tyres getting too hot isn’t only caused by friction between rubber and asphalt, it’s also caused by heat from the carbon brakes. These run much hotter than WSB’s steel brakes, firstly because carbon is designed to run at higher temperature and secondly because they’re matt black, so they don’t radiate heat as effectively as shiny steel rotors.

“But maybe you will win more from a better temperature and pressure than you will lose from a slightly heavier wheel,” another engineer told me. 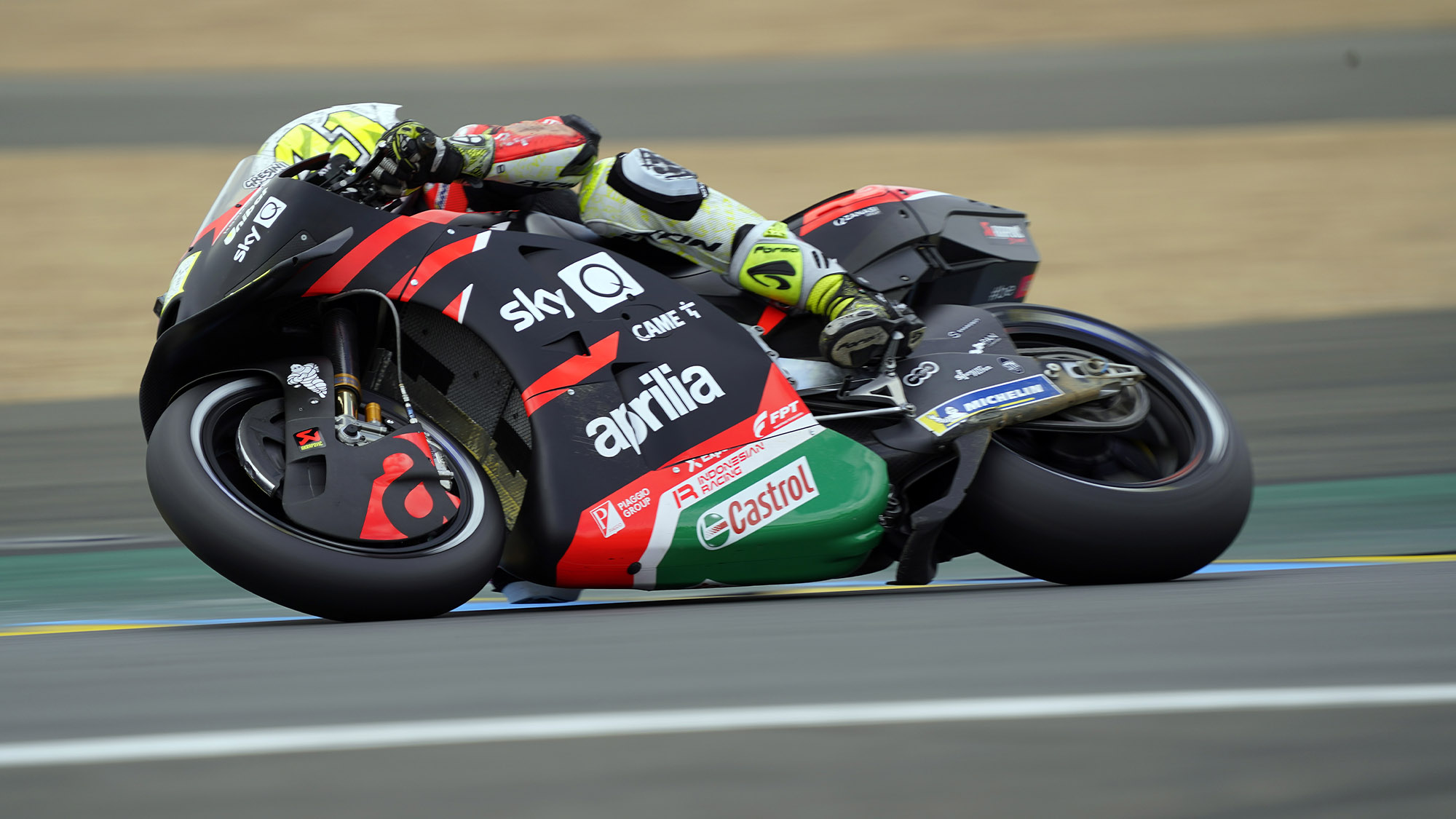 Aprilia’s front wheel covers aren’t for aero performance, they use brake heat to warm the rim and tyre when required

Italian wheel manufacturers Marchesini and OZ dominate the MotoGP grid (Honda and Yamaha use OZ, from Padua, near Venice, while Aprilia Ducati, KTM and Suzuki use Marchesini, from Bergamo, near Milan).

Marchesini has already redesigned its MotoGP front rims to increase volume, so tyre pressure is affected less with temperature increases. It is also working at reducing tyre pressure in another way, which is top secret and “a big job”. Pressure-release valves – which automatically reduce pressure at a predetermined value – aren’t allowed in MotoGP.

However, this begs the question, once the tyre has cooled how do you increase its pressure to the optimum?

Meanwhile there are rumours that OZ may be preparing finned front rims for MotoGP bikes. Its engineers and PR people remained suspiciously silent whenever we approached them for information.

Most of time MotoGP teams work to keep the tyres cool, but not always. At some tracks and in some conditions they want to increase temperature – mostly at the front – to help the tyre reach and maintain optimum temperature for the best-possible grip.

Aprilia seems to be working on this more than the other factories. The RS-GP has front wheel covers that look like they’re designed to improve aerodynamics and airflow around the wheel, but in fact they are only fitted when the rider struggles to get enough heat into the front tyre to make it grip properly. These covers retain some of the heat generated by the brakes to warm the rim and therefore the tyre.

Formula 1 teams do the same, channelling the super-hot air that’s passed through the front brake discs to heat the front rims.

Some MotoGP engineers call all this fuss the “ever-smaller granularity” of the premier class. Granularity is “the extent to which a system is broken down into small parts”, so that each and every detail matters like never before.

This is why however hard the rule makers work to simplify the racing and make it cheaper, the opposite always happens, because when the prize is as big as the MotoGP world championship, the factories will always spend more to fix every detail.