So much to talk about from Qatar, so let’s work our way through the weekend like Andrea Dovizioso would if he was a journalist 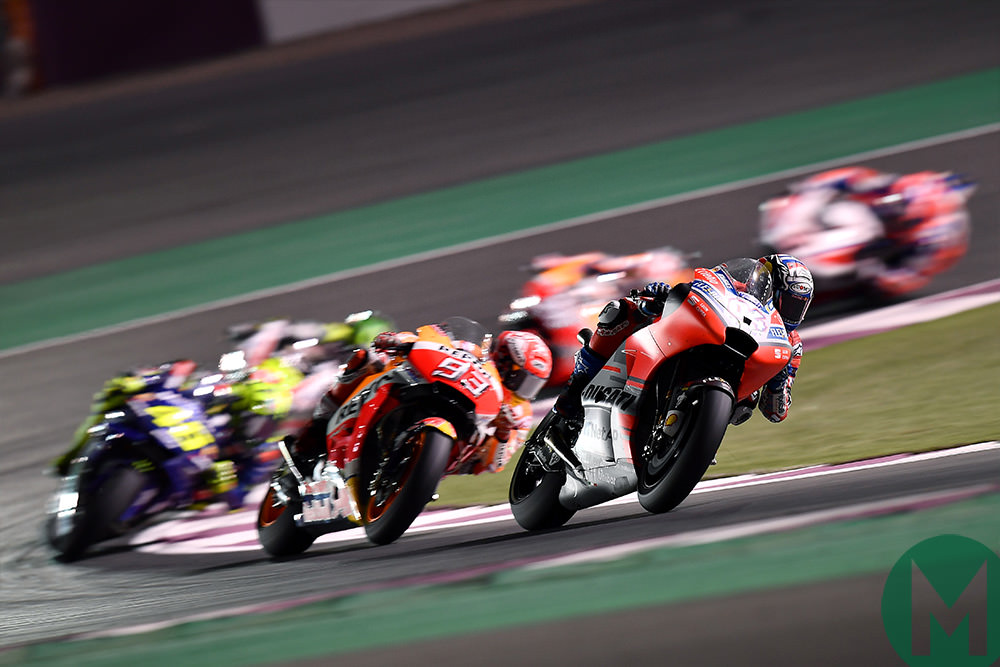 Dovizioso was remarkable from Friday afternoon to Sunday night – cooler, calmer and more confident than I’ve ever known a championship contender. He applies science to his racing, working his way through problems logically and methodically until he achieves the result his calculations have predicted. If he thinks fourth place is the best he can achieve, he will be happy with fourth. If he thinks a win is possible, he will be happy with a win. And he was.

All weekend the Italian’s comments must’ve been a worry for his competitors, even though everyone knew that Dovizioso and his Desmosedici love Losail, finishing second on their last three visits.

“I feel good because the lap times come easy,” he said on Friday. “This helps us to work on the details for the race, because you have to be ready in every detail.”

On Saturday he apparently fluffed qualifying, ending up fifth fastest after slowing too much to avoid that frantic battle during Q2. But still… “I’m relaxed, our bike is working well.”

He was the same in the race. He made a horrible start, rounding the first corner in 10th. Many riders expecting to win would’ve panicked at that moment. But not Dovizioso.

“I was able to manage the race,” he said. “I was able to make a really terrible start and gain a lot of positions and at the same moment save the tyres and decide my strategy. It’s not so easy to have the chance to do this when MotoGP is at such a level, so I’m really happy about that.”

Too right. When you are fighting your way through the pack while making sure you don’t abuse your tyres and all the while you can look ahead, further down the track and further into the race, marking your rivals and deciding your tactics, then you have an ice-cold command of the situation. That says a lot about Dovizioso and it says a lot about the motorcycle that Ducati, crew chief Alberto Giribuola and Dovizioso have created.

The world number two did indeed have it all planned out. He was in no great hurry to get to the front because he knew that everyone was saving their tyres.

Dovizioso used the Ducati’s top-speed advantage wherever he could, rather than asking too much of his tyres. It took him until half-distance to make it into the top three. He rode his fastest lap on 19, the first time he’d had a clear track. But he couldn’t make the break, because although he had nursed his tyres his rear was already past its best.

“I could still make good lap times but not as good as I wanted. I couldn’t take my usual lines, so I couldn’t create a gap. For sure, Marc [Márquez] did something unreal to stay with me. Like always, you have to win the race to understand the level of your competitors and I didn’t expect to finish the race with Marc [behind].”

Indeed. Márquez’s second place was more remarkable than Dovizioso’s victory. Losail has never been an RCV track. The RCV is a squat little attack dog, built for launching itself at the kind of tight corners that dominate most MotoGP circuits. Losail is fast and flowing, rather like Phillip Island, but instead of the corners opening out into glorious, full-throttle blasts, each sweeping curve at Losail leads into the next, so overtaking is difficult and side-grip is everything.

Márquez had climbed the podium only once in his last three visits to Losail, twice finishing seven seconds behind the winner, but this time he was close enough to unleash another Maq-attack at the final corner. He knew it probably wouldn’t work, but it was worth a go.

And it did nearly work, because he crossed the finish line with his front wheel just inches behind Dovizioso’s rear wheel. So what’s changed with the Honda? Márquez is still running his 2017 chassis, so it’s the engine that’s different. HRC deployed heavily redesigned engines in 2016 (reversed crankshaft rotation) and in 2017 (big-bang firing configuration), so this was the first time in years that it has been able to concentrate on the details.

Márquez and the other Hondas now have better drive and more top speed than they’ve had in years. At Losail his RC213V was just 1.2mph (2.9km/h) slower than Dovizioso’s Duke. Last year the difference was a more significant 3mph (5km/h).

All weekend the difference was easy to see. Márquez was no longer riding outside himself, winging it through every corner, relying on his supernatural abilities to keep him out of the gravel. “I’m very, very, very happy,” said the reigning world champion who didn’t crash once all weekend, a huge improvement on his 2017 average of 1.5 falls per round. “Andrea deserved the victory because he was faster and had more. My target was to control him. When he passed [Johann] Zarco I went with him. I was on the limit, sliding around the track, but I was able to stay there and able to try at the last corner.”

Cal Crutchlow was the same: on the limit but not over it (except once in warm-up). At the previous three Qatar GPs, he qualified ninth, 10th and 12th, and crashed out twice. This time he qualified fourth and finished fourth, 0.13sec per lap slower than Dovizioso.

“Honda has done a great job with the engine,” said Crutchlow after the race. “We are more competitive, especially on the straights, so we don’t have to fight the bike so much in the corners.”

The Ducati team must’ve travelled home wearing big smiles after its first season-opening victory since 2009, but Márquez’s speed at one of the RCV’s worst tracks must have them very worried.

Yamaha also seems to have turned a corner. True, Valentino Rossi also finished third at Losail 2017, but Sunday was different. “Last year’s podium was a surprise,” he said. “This time I knew I could have a good race.”

Rossi lost his chance of victory during the scariest moment of the 22 laps, when Márquez and Zarco touched at 210mph, the Spaniard’s rear end airborne and fishtailing as he fought to avoid hitting Dovizioso. That was when Zarco went from first to third. Rossi took a few more corners to get past the Frenchman, by which time the two leaders had eked a narrow advantage. “All the wolves behind were attacking – they were trying to take a leg or my arm!” he laughed.

The race was another classic, with the closest premier-class top-15 – covered by just 23 seconds – in 70 years of Grand Prix racing. Dorna’s tech rules, again.

The biggest surprise wasn’t even on the podium. By Saturday, many people were wondering if Maverick Viñales had dug himself into such a deep hole since last summer that he would never have found a way out. He qualified 12th fastest, his worst grid position since he graduated to MotoGP.

He seemed exasperated and lost. “I don’t feel well on the bike, exactly the same as in the tests,” he said on Friday.

And then his own little miracle in the desert – he charged through from 14th to sixth, just yards behind Danilo Petrucci. When Viñales had a clear track – on laps 14, 15, 16, 17 and 18 – he was the fastest rider on the track. This was probably his best race since Mugello last year.

“We took the opposite direction to the test: we went harder in the front and stiffer in the rear,” he said. “It’s something I really like and something I’ve asked for many times. I’m happy because I recovered the feeling from many, many months ago.”

The new set-up allowed Viñales to improve his corner speed, which in turn reduced his wheelspin problems because he didn’t have to get on the throttle so early and hard.

And what of the others? Rins set the fourth fastest lap, just 0.091sec off the best, then crashed. The Suzuki works well at Losail, so it’s too early to know if they’ve made a breakthrough. Petrucci lost vital time when Rins fell in front of him. Zarco and Dani Pedrosa had tyre issues; Zarco with the front, Pedrosa with the rear. Jorge Lorenzo’s brakes failed – luckily at Turn 4, not Turn 1 – and he had to abandon ship. His mechanics later found a missing brake pad in the Turn 4 gravel trap.

Aprilia had a grim Sunday: Aleix Espargaró fought for a top-10 result until he had fuelling problems on the last lap. KTM had a grim weekend, with Pol Espargaró a second off the pace, three-tenths better than last year, until his bike stopped. Qatar was surely the first track of KTM’s difficult second album.