Maverick Viñales dominated Phillip Island, so has Yamaha made a big step or does MotoGP’s greatest racetrack camouflage the M1’s weak points? 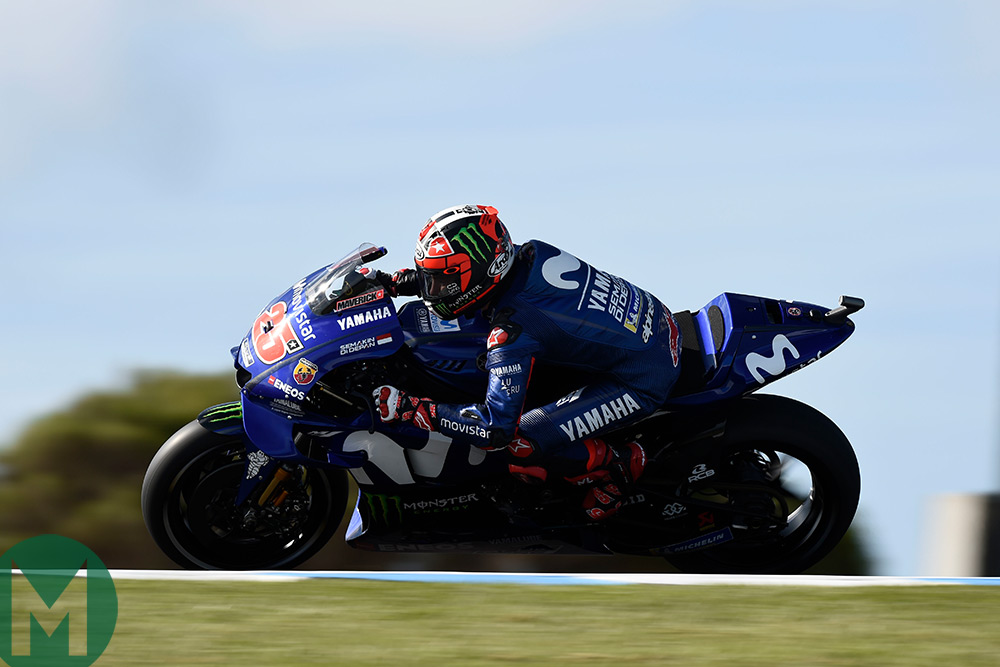 Maverick Viñales ended Yamaha’s 25-race losing streak on Sunday, but how did he do it? After the race he told us: “the team worked in the way I wanted, and that’s unbelievably good”.

I could be wrong, but I don’t think this is the reality, because it suggests his team doesn’t usually work in the way he wants.

Despite ructions within the Viñales garage, there’s no doubt that his crew and Yamaha have his back and they are always trying to help him get the best results. It’s idiocy to suggest otherwise – why would a company invest tens of millions of Euros in a rider to make sure he fails? Regardless of who his team-mate might be…

Yamaha has just got a bit lost, that’s all. “It’s cyclical, like football, like Barcelona and Real Madrid,” says Jorge Lorenzo, the company’s most recent MotoGP champion. And Lorenzo is correct – it’s easy to forget that Honda went 18 races without a win in 2008 and 2009, while Ducati didn’t pick up a single winner’s trophy between November 2010 and July 2016.

So why did Viñales win at Phillip Island? For starters, the mind-numbingly fast seaside circuit is easily his favourite and the 23-year-old’s record there is something else. In 2013 he finished 0.003 seconds off the Moto3 win. The following year he won the Moto2 race, at his first attempt. In 2015 – Suzuki’s first season in MotoGP following a three-year break – he finished six seconds off the win, despite a mammoth horsepower handicap. The next year he was on the podium aboard the GSX-RR and again last year on the Yamaha.

This time he left the pack behind, taking the lead soon after the horrific Márquez/Zarco collision, having decided that the safest place to be was as far away from everyone else as possible. After that his progress was Lorenzo-style: butter smooth and hammer hard. No one else stood a chance.

Phillip Island is a grandes cojones racetrack – riders use more throttle there than anywhere else – through 78 per cent of the lap. If PI was a rock and roll band it would be Led Zeppelin. The layout is one big primal scream: gas it up, spin it up and enjoy the ride, because there’s hardly a racer in the world who prefers slow corners to fast corners.

“Fast corners are always the most enjoyable – when the bike’s floating around and you’re making it do things it doesn’t want to do,” Mick Doohan told me a few years ago, while we discussed Phillip Island. “They’re interesting because of the loads on the bike.

“At that kind of speed the bike doesn’t really want to turn, it wants to go straight, so you’re using a lot of physical force trying to make the bike do what it doesn’t want to do. And when you get a fast corner right there’s a lot of time to be made.”

This is why the rider can make the difference at Phillip Island and at other fast, flowing tracks. They also reduce the importance of outright horsepower, because a good rider can compensate by using more speed out of the corners, which he can’t at slower point-and-squirt circuits.

Faster tracks also camouflage the 2018 M1’s other problems of below-par electronics settings and inadequate crankshaft inertia. The lack of crankshaft inertia causes Viñales and Valentino Rossi difficulties both on corner entry and exit. When they close the throttle the engine shuts down too quickly, making the rear end snappy, and when they open the throttle the engine picks up revs too quickly, causing wheelspin. Both of these problems are magnified many times in low-gear corners.

No surprise then that the only other 2018 race where Viñales thought he had a chance of winning was Silverstone – another fast, flowing racetrack.

The M1 has always been stable through long, fast corners. Also, it’s easier to play with grip in fast corners, because you’re in a higher gear, so things seem to happen slower.

Viñales’ tyre choice on Sunday was very important. Usually, tyre talk is all about rear tyres, but at Phillip Island it was more about front tyres. Viñales was the only rider on the podium to choose the soft front. A wise decision, because the Australian Grand Prix has always been a plague of front-end crashes, at least when conditions are cool.

The Turn One right-hander is the worst: riders motor down the start-finish at more than 200mph, the front tyre cooling all the time, then they tip into the corner at around 130mph. If they are unlucky, the south-westerly coastal wind will be blowing hard enough to take their front wheel away, which is what happened to Cal Crutchlow on Friday. Hafizh Syahrin and Dani Pedrosa also went down at Turn One. Pedrosa is so light that he struggles to keep both wheels on the road when the wind blows at Phillip Island. “It felt like I was sailing out in the corners,” he said.

Phillip Island is a great joy for riders and also scary as hell, so you need as much bravery as brilliance to excel there. And it’s not easy to be brave unless you are confident that the front tyre will stick when you hurl the bike into Phillip Island’s corners, most of which are attacked at three-figure speeds. Runner-up Andrea Iannone chose the medium front and twice nearly crashed at Turn Four.

“I was so happy we could make the soft front work,” said Viñales after his first win since May 2017. “Because the medium was impossible for me – I couldn’t turn in the corners.”

What are the chances of Viñales or Rossi winning at Sepang on Sunday or at Valencia two weeks later? Not much, I’d say. Neither track plays to the Yamaha’s strengths.

“In some ways we did things different this weekend,” added Viñales on Sunday. “We tried to maintain the same set-up and get used to the bike. This way worked really good and we will try to work like that in Malaysia.”

But surely the reason he was able to leave his settings alone last weekend and focus on his riding was for all the reasons explained above. Sepang is another fast track, but less so than Phillip Island, and it’s also tropically hot, so the surface is usually pretty greasy. And when grip is low, the Yamaha often struggles to use its corner-speed advantage. In other words, Viñales and his crew may well be back to turning the bike upside down, trying to catch Ducati and Honda.

Elated by victory at Phillip Island, instead of despairing in defeat, Viñales is now more confident of his future with Yamaha, so long as they listen to him.

“I can ride really fast when I have the chassis for my riding style and I really love this chassis, but we have to improve the electronics and the engine,” he said.

But then Viñales seemed to contradict himself. “Yamaha needs to provide a bike for my riding style, especially in the middle of the corners, to turn,” he added. “If we have that then we have the chance to fight. We also have other areas where we need to improve, like engine-braking into slow corners.”

Congratulations to Viñales, his crew and everyone at Yamaha, but they’re not out of the woods yet.