Thirty years ago, when Honda was working towards replacing its somewhat evil screamer NSR500 with its rider-friendly and game-changing big-bang NSR500, Mick Doohan’s crew chief Jeremy Burgess told HRC engineers, “You only use top speed once a lap, you use acceleration every corner”.

In other words, it’s better to create an engine that works at its best through the corners than down the straight.

Sunday’s Qatar GP was the usual battle between those two philosophies: Yamaha’s sweet-handling but relatively sluggish YZR-M1 against Ducati’s missile-fast but unwieldy Desmosedici.

It was the same fight at the 2007 Qatar GP, when Valentino Rossi and his 187mph/301km/h M1 battled with Casey Stoner and his 194mph/313km/h Desmosedici. On that occasion the Aussie genius beat the Italian genius, so why did Yamaha beat Ducati on Sunday?

Partly because the M1’s speed handicap was nothing like it had been in 2007. Johann Zarco’s mind-boggling 225.2mph/362.6km/h top speed during FP4 exaggerated Ducati’s advantage at Losail. In the race, Pecco Bagnaia’s 214.9mph/346km/h Desmosedici had a 2.2mph/3.6km/h advantage over Maverick Viñales’s M1. The difference was similar in the race-mode FP4 session: 2.7mph/4.3km/h.

That simply wasn’t enough to neutralise the Yamaha’s superior corner speed, especially once the Ducatis started running out of tyre, which happened earlier than they’d expected.

All the problems that had plagued Viñales during recent years seemed to evaporate in the desert air: he didn’t immediately struggle with the rubber laid down by the Moto2 pack and he had no difficulty making passes by using the front tyre to stick it up the inside of rivals. So he went relentlessly forward instead of faltering and going backwards.

“After the second sector on the first lap I felt some incredible potential on the bike,” said Viñales, who started his Yamaha career with victory in the 2017 Qatar GP. “My corner speed was amazing. I was saying, ‘Wow!’ because I hadn’t had that feeling all weekend. To have that kind of corner speed we worked very hard with the front of the bike. Also, Cal [Crutchlow, Yamaha’s new test rider] worked very hard with the bike and the way Cal rides is very similar to me. This helps us with many things, especially because he came from a big factory.” 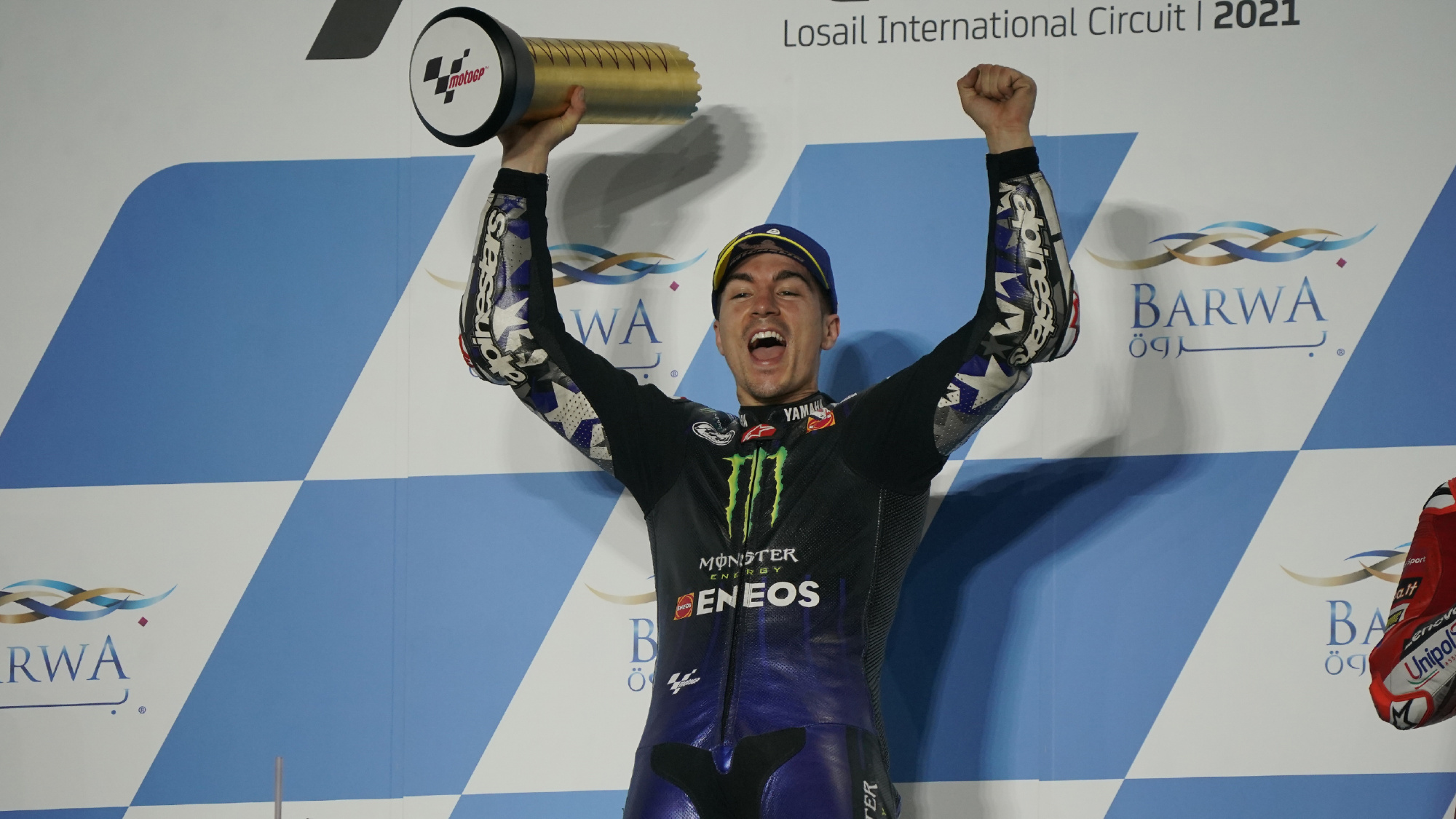 Viñales rode superbly – will he be the same next weekend and beyond?

Crutchlow spent the last the last six years of his full-time MotoGP career riding Honda’s RC213V, which makes most of its lap time on corner entry. Perhaps that knowledge has helped Yamaha adapt its M1 better to Michelin’s front tyre, which has been an issue ever since Michelin arrived in 2016.

Perhaps the cooler race conditions also helped, because keeping the tyres cool has long been Yamaha’s problem. Track temperature during the race was nine degrees less than it had been in FP4, so maybe that’s where some of the winner’s corner and exit speed came from.

Viñales wasn’t only surprised by his speed through the turns.

“I was able to exit the last corner with a lot of traction, then in third and fourth I didn’t have wheelie, so I was able to get a really good slipstream [behind the Ducatis], then in fifth and sixth they went away a bit, but it was much better than I expected.” 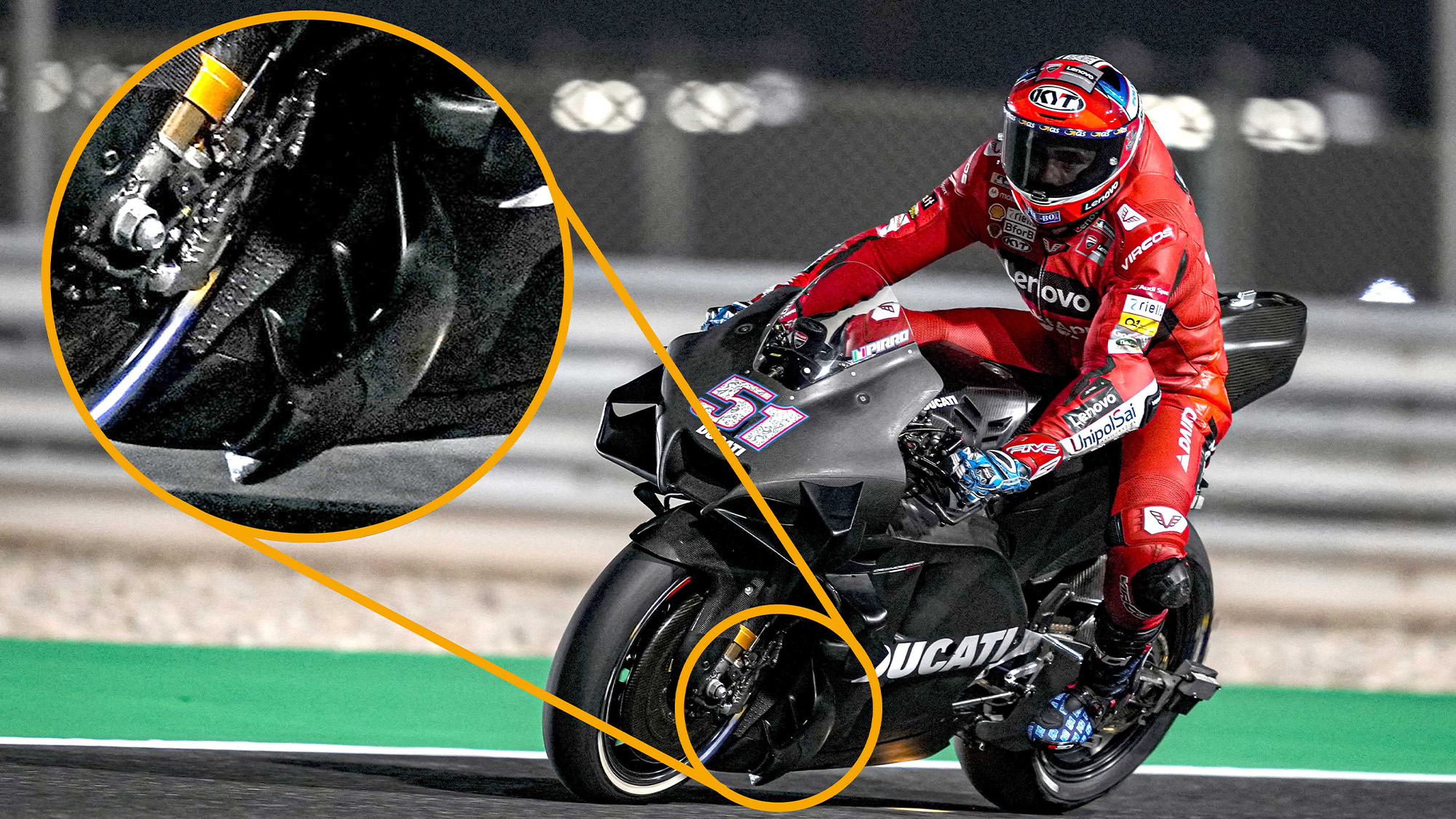 The Ducatis had nothing for the 26-year-old Spaniard, who carved some beautiful moves on Jack Miller, Zarco and Bagnaia, so why weren’t they able to fight back?

Because they didn’t have the same corner speed, exit speed and low-gear acceleration. In MotoGP acceleration isn’t governed by horsepower, because all the bikes make far too much power. It is governed by the physical limits of grip and wheelie. Power doesn’t come into the equation until riders click into fifth and sixth.

“Maverick had a strong advantage in second and third gears – he was always gaining metres on us there,” said Pramac Ducati’s Zarco, who crossed the line 1.092 seconds behind the winner, a deficit of just five-hundredths of a second per lap.

During the second half of the race all the podium men had problems with the rear tyre losing grip and the rear end coming around as they attacked corners, but the Ducatis definitely suffered more.

“We need a better connection with the rear tyre into corners,” added Zarco, who was Viñales’s main challenger during the latter stages. “I was feeling good, so I tried to follow Maverick, but at that moment he raised his pace for five or six laps and I asked too much of the tyres, which is why the last three or four laps were complicated for me.”

Ducati will be crunching the numbers through its MegaRide tyre-modelling software as you read this. Perhaps the strong winds were the culprit, because when sand is blown onto the racetrack it gets between the tyres and the asphalt, working like sandpaper on the rubber, which increased degradation, plus the reduced grip increases wheelspin, which also hurts the rear tyre. Of course this would’ve also affected the Yamahas, but maybe it affected the Ducatis more. 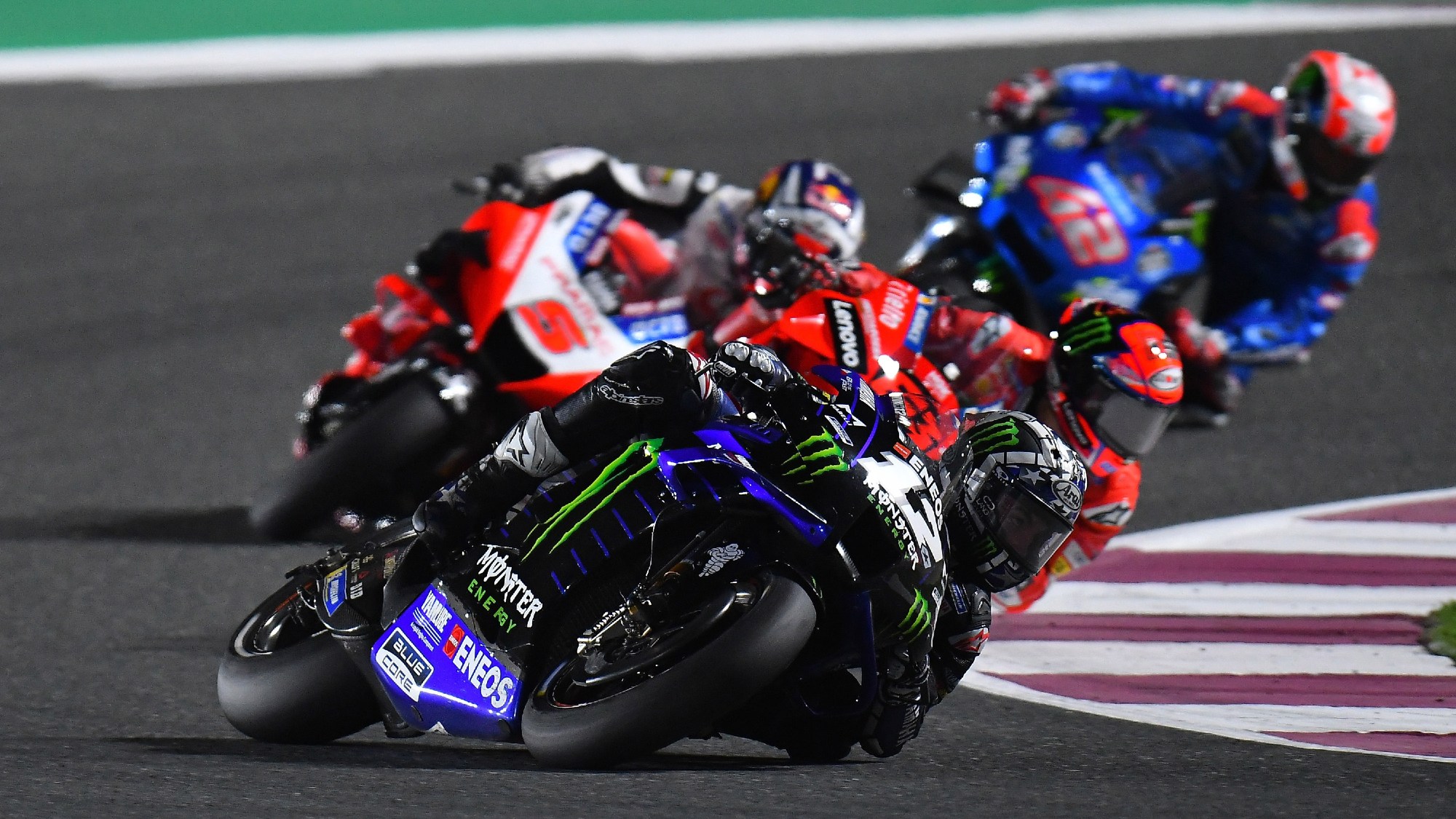 The Ducatis couldn’t live with Viñales’s corner speed, especially when tyre wear came into the equation

No doubt the Ducatis also lost more performance due to the windy conditions. The Desmosedici has more wings than any other MotoGP bike and the greater a motorcycle’s surface area the more it will be affected by the wind. Also, Ducati ran with its front-wheel fairings during practice, then removed for the race, due to the wind. That can’t have helped either.

Bagnaia, who took the chequered flag one-tenth behind fellow GP21 rider Zarco, reckoned the changing conditions during the weekend affected him a lot. This is always an issue at Losail, with ambient temperature, track temperature and humidity changing each and every time riders go out on track.

“It was impossible to work for the race during the weekend,” said the 24-year-old Italian. “During FP2 we had to make a time attack to enter Q2 directly, FP4 wasn’t very similar to the race and today the conditions were difficult. Maybe I started to struggle after 15 laps because of the cold and the wind. Maverick had a great pace and more traction than us. I tried to follow him but he escaped. Maybe next time I will push less in the first laps.” 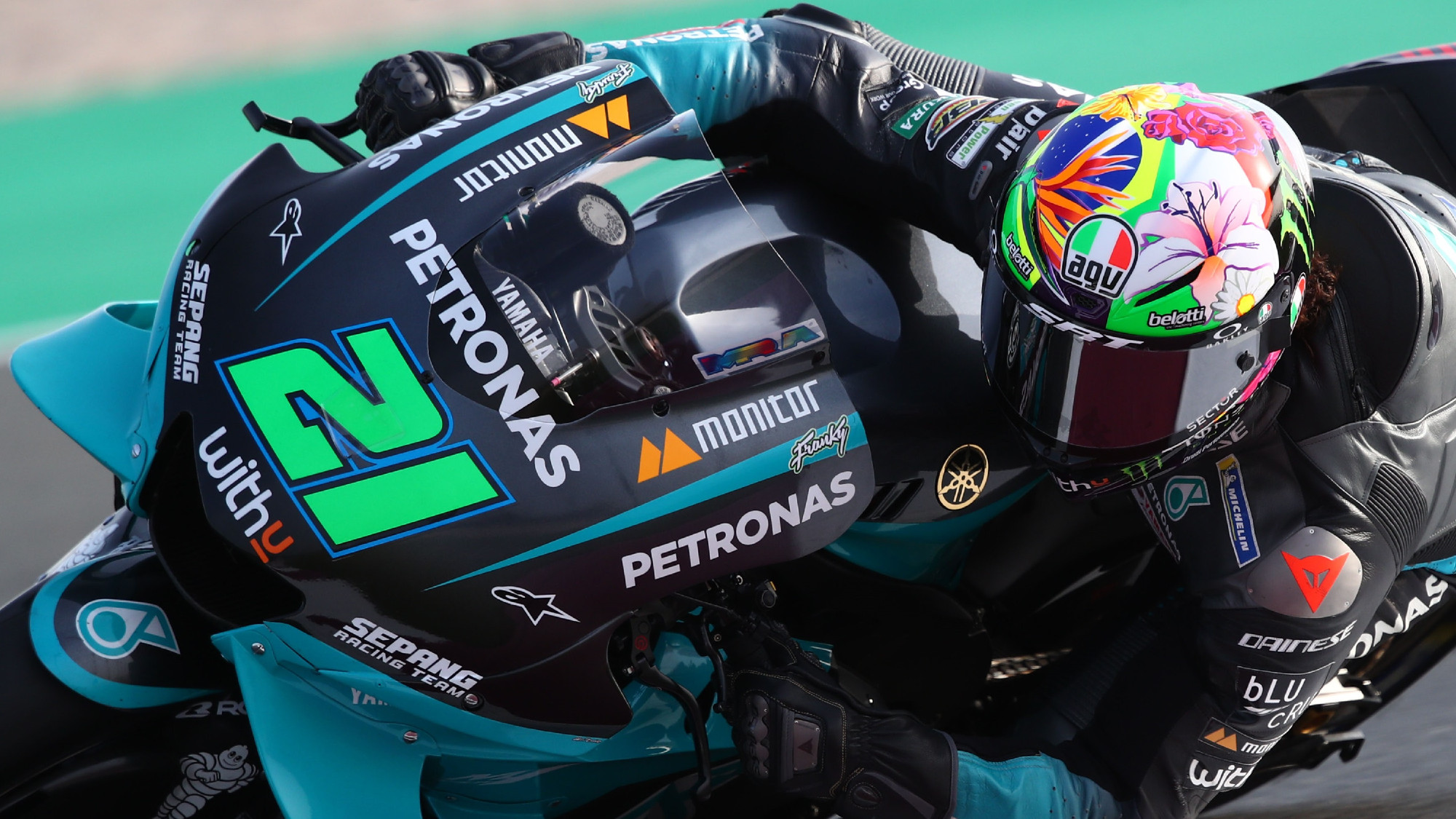 At the end of lap 15, Bagnaia was less than two tenths behind Viñales but that gap quickly grew as his pace dropped making him easy prey for Zarco. But then Zarco ran into tyre trouble and they both had world champion Joan Mir bearing down upon them. Suzuki’s GSX-RR was true to form, looking after its tyres better than the other bikes, making Mir the fastest man on the track in the final laps.

Mir swept past Bagnaia with two and a half laps to go and then set off after second-placed Zarco. He passed the number-five Ducati at the penultimate corner but made a mess of the final corner, which made him easy prey for the Ducatis as they swept towards the finish line.

“Maybe my mistake was to pass Zarco – I should have stayed behind him to use his slipstream,” said Mir, who was nevertheless delighted with fourth place after qualifying tenth. “It’s been a difficult weekend because I didn’t have a good feeling with the bike. You could see my face after every session – I’m not very good at hiding this sort of thing!

“During testing we tried a lot of things and maybe we got a bit lost. For some reason I wasn’t able to stop the bike. I had a lot of problems and qualifying was so difficult. I was pushing like an animal but the lap time was impossible. It was so frustrating and I was so angry. Last night we found a setting we used last year and all the problems we were having disappeared. I cannot say what we changed, but today the bike was so good.” 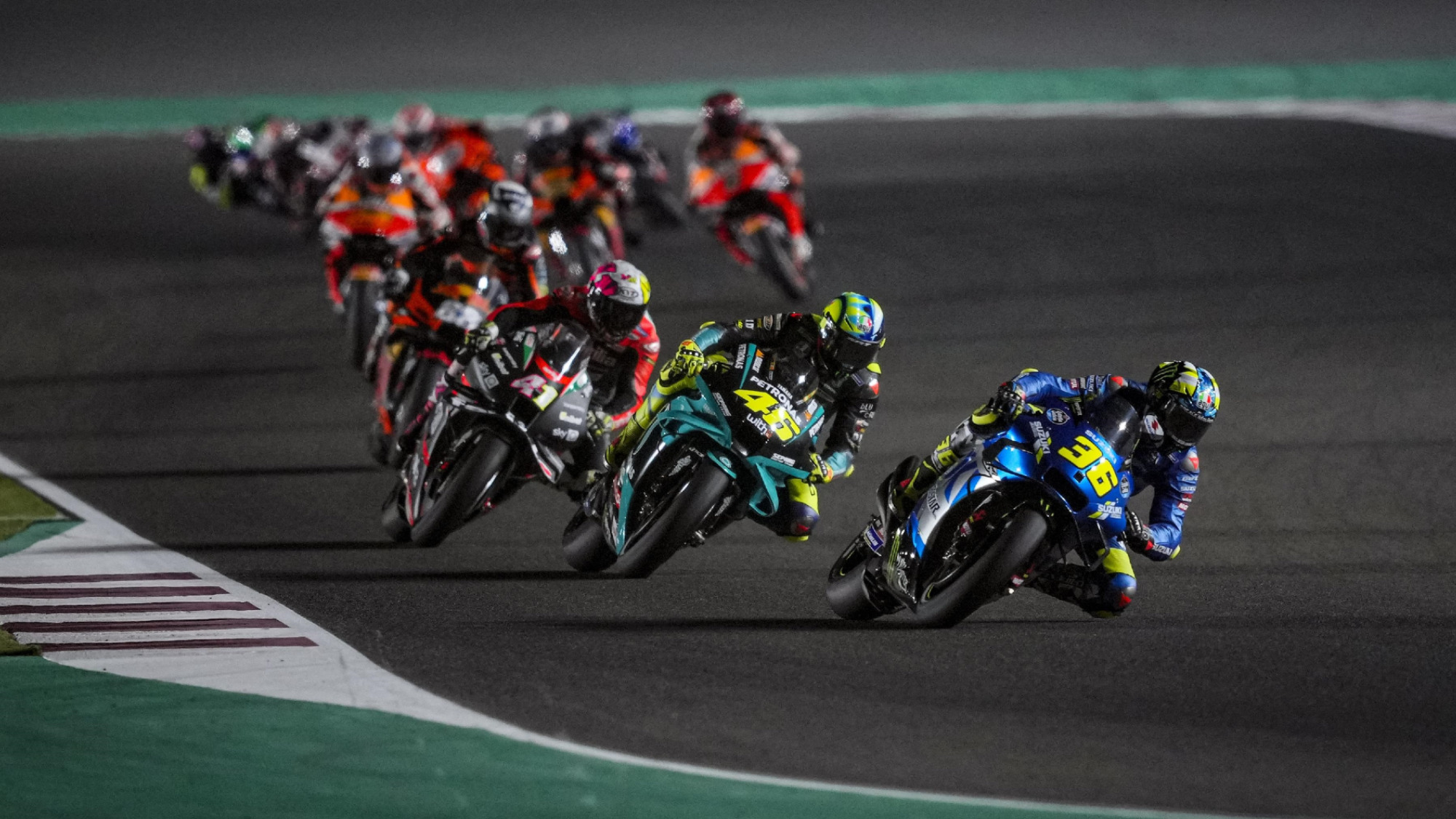 Zarco was overjoyed with his best result since the 2018 Spanish GP. The former Moto2 world champion has ridden the rollercoaster over the last few seasons: a nightmare with KTM in 2019, his career saved by Ducati last year, when his speed won him an upgrade from the Esponsorama team to Pramac, with a latest-spec Desmosedici GP21.

“I am so, so, so happy – I have so much happiness!” he grinned. “On the last lap I did everything I could do to go fast with tight lines to keep Mir behind me. He overtook me but thanks to the bike I could overtake him in the straight.”

Bagnaia’s tyres came good again in the final laps, allowing him to fight back.

“I wouldn’t have been happy without a podium, so risked a lot to chase Johann and Joan,” he added. “When I saw Mir go wide at the last corner I tried to exit even better than my fastest qualifying lap and on the straight it was impossible not to overtake him!”

No one had bigger rear-tyre issues than Bagnaia’s team-mate Miller, who went backwards after half-distance.

“We got a good start and I was able to push as I liked, but not too hard,” said the Aussie. “Then when Maverick came past I thought, ‘OK, now it’s time to start upping the pace’. I was able to drop into the low 55sec for a few laps and then – bang! – I hit a wall and started losing the rear. It was mainly the right side of the tyre. Off-gas was the biggest issue and as soon as you start losing it off-gas it’s difficult to carry any corner speed.”

So what does it all mean? Has Viñales finally cracked it? Has the stability of marriage and a baby on the way fixed his psyche? Will he find the consistency that’s always eluded him or will he fall back into his usual hot-and-cold habits?

It’s far too soon to say because Losail isn’t a good indicator of year-long performance. Since the first Qatar GP way back in 2004 only five times has the race winner gone on to take the title. The track is unusual and the conditions are unique.

Next Sunday’s Doha GP at Losail may give us more of the same or something different but we won’t see the true picture of 2021 until the racing moves back to Europe, to Portimao, Jerez, Le Mans and Mugello.