Motorcycle racing has produced so many characters, but few will make you laugh as much as four-times British champion, Isle of Man TT winner and John Player Norton rider Dave Croxford.

Crox raced from 1962 to 1976, crashing no less than 223 times, without breaking a single bone, at a time when Armco was everywhere and body armour was something you found in the Tower of London. No wonder fans called him Rubber Bones.

Many of Croxford’s tumbles were comedy events, in retrospect, at least. “I crashed at Brands while battling with Bazza (Sheene)… I was sliding along on my arse waving at him, and he was waving back.” Or his only TT crash, “This bloody great big pig comes out and it’s running alongside me…”.

Such were the stresses of racing that Crockers sometimes prepared himself for action with a swift one or two in the paddock bar. “You’d have a couple of pints of Guinness and go out. You could do that in them days, it was real good fun!” 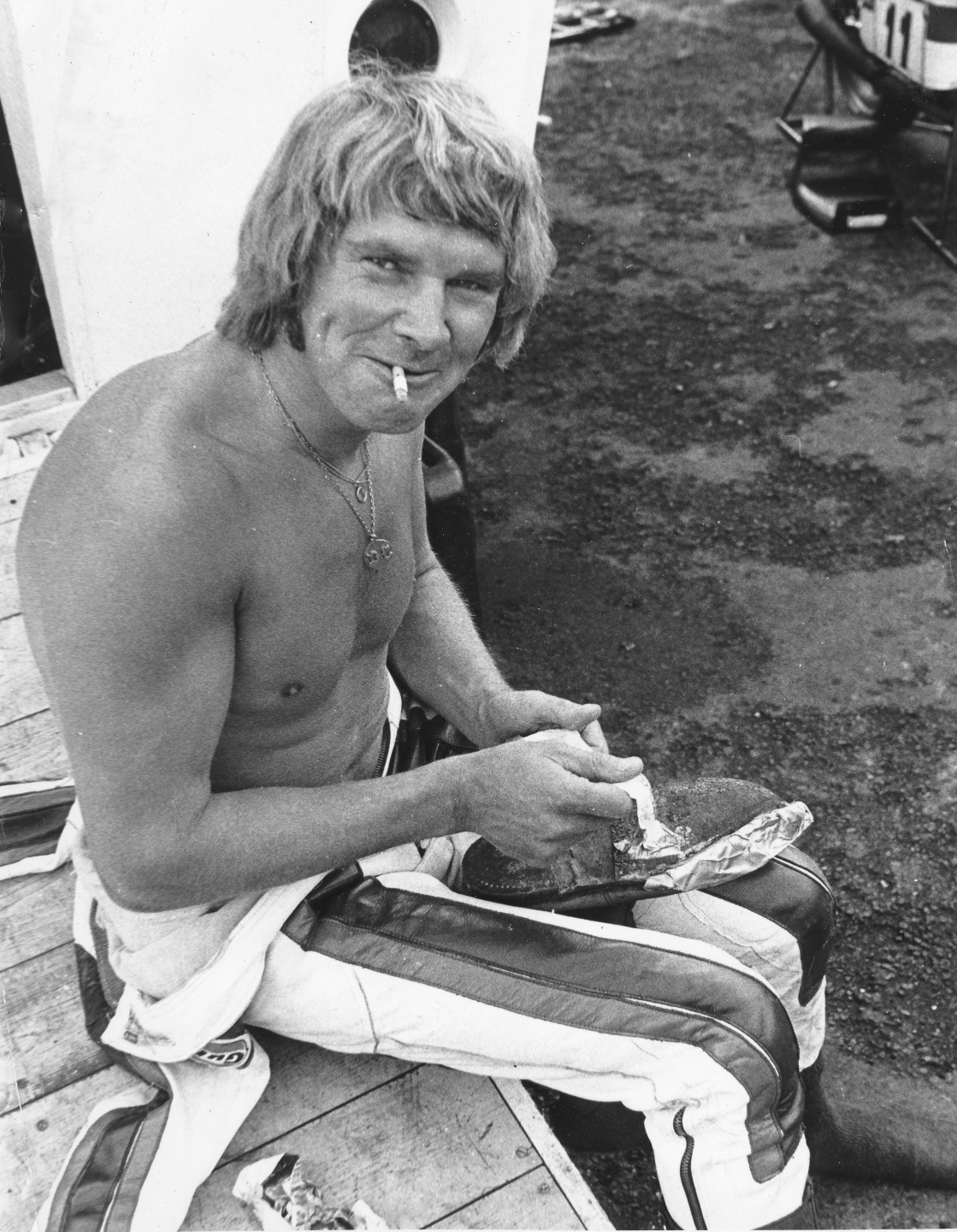 “That was the John Player Norton days – smoking and taping up me boots. You used to come back from races with your toes bleeding. I used to grind them away. I’ve still got the scars.

“I had a few good years when I was really on a roll with John Player – you keep winning and winning, you can do nothing wrong. I didn’t even bother to practice. Frank [Perris, JPN team manager] used to ring me, ‘Dave where are you?’ ‘I’m in bed, why?’ He said, ‘You’re supposed to be at Brands Hatch practising’. ‘Really? Well, tell Peter [Williams, his JPN team-mate] to stick me number on and practice for me. I’ll be there later on.’ I was hanging, wasn’t I? I get down there for the race, the flag drops and I’m gone. I was on a mission.” 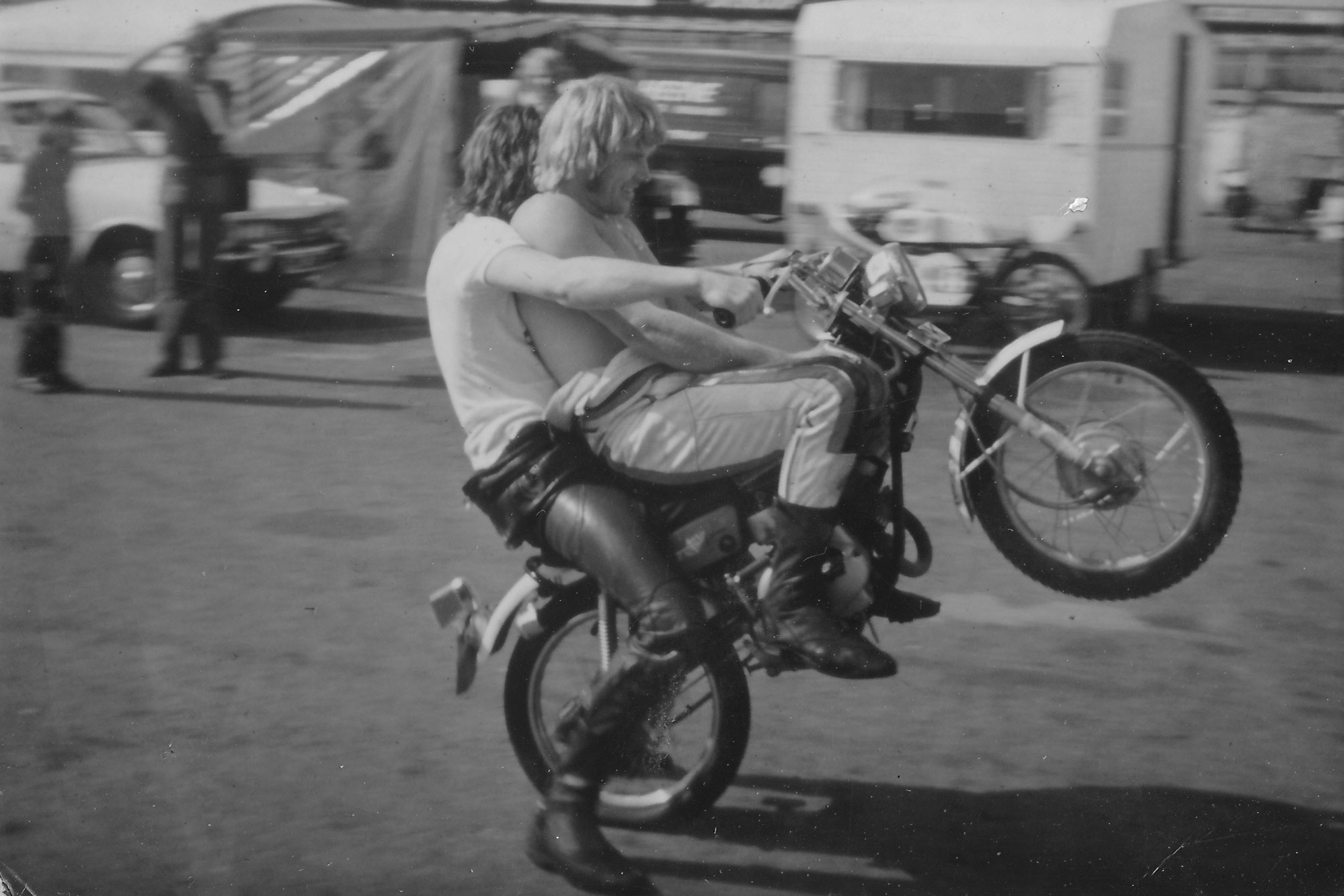 “That’s Bazza and me, doing a wheelie on his paddock bike, at the Silverstone F750 round in 1973. Barry was my mechanic when he was 16, when I was 22 or 23. I rode his dad Frank’s bikes for a bit in ’67 or ’68, and Barry used to come along and run me bikes in. We’d roll up at Brands Hatch, pay seven quid and ride all day. We went everywhere together, Bazza and I. Later on we had E-Type Jags, we was the boys.

“I had the permed hair, the sideburns and the flared trousers because it was the 1970s. Everybody had long hair and we had perms too; Kevin Keegan, everyone. We used to wear hairnets, Bazza and me, so we were called the hairnet boys. We had to, to keep it neat for all the PR stuff, because it was permed and it was so long. If you won a race, you’d run to the toilet, take off the ’net and run back to get photographed. If you didn’t wear the net, your hair would be an absolute mess.

“On Saturday you’d turn up at a race and someone would go, ‘Dave, you hair looks good’. ‘Yeah, I’m wearing Garnier this week’. Or, ‘Dave, what’ve you done to your hair?’ ‘Oh, me mum permed it and burned the bloody ends. Nice colour though, isn’t it? It’s called autumn gold.’ The hair was important in them days.” 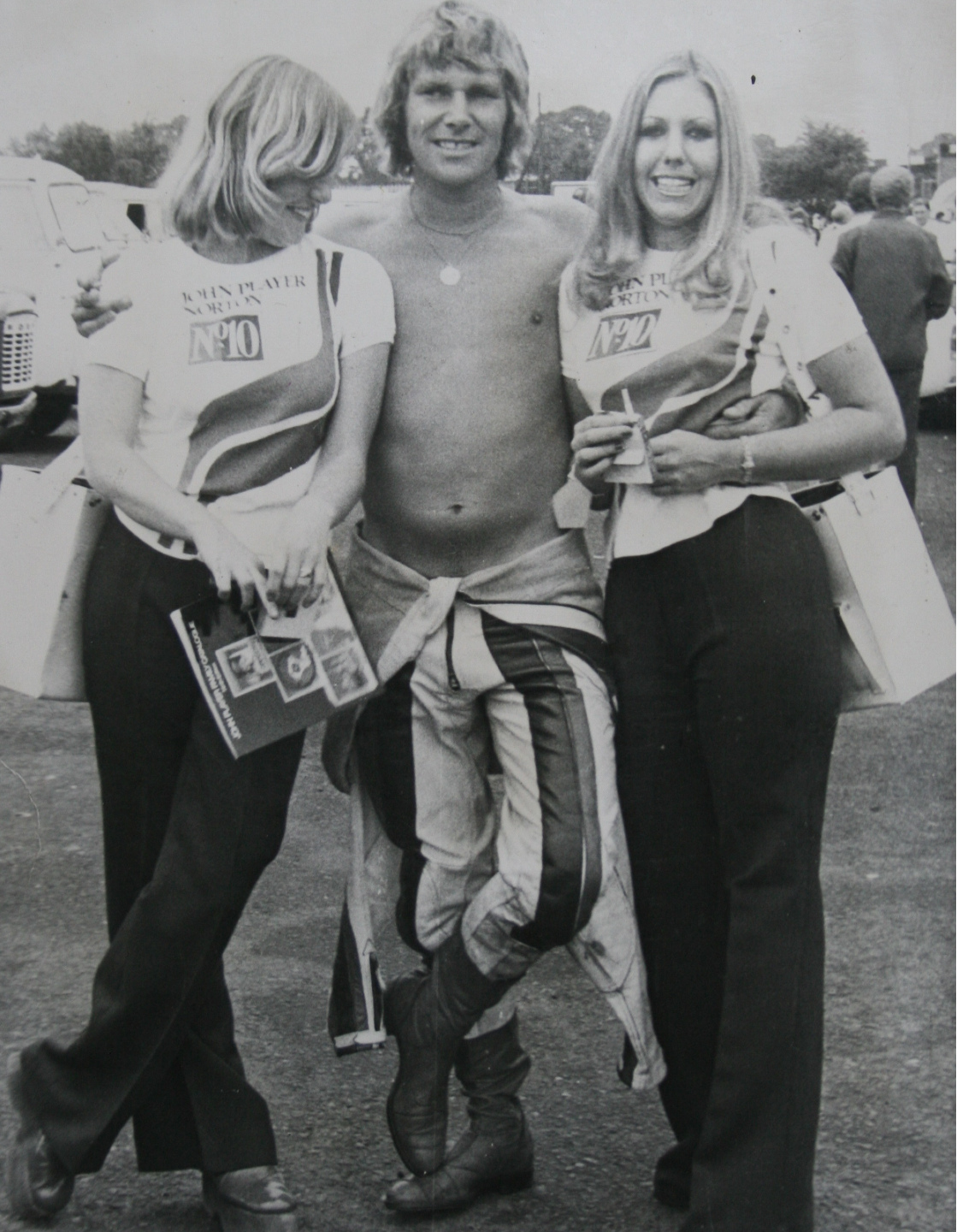 “John Player Norton were really keen on the promotions girls and all that. We used to go into the motorhome, drink some wine, then go out for a bit of practice, but we wouldn’t drink before races. When I was racing my G50, we’d be in the bar at lunchtime, pints of lager, talking to the boys, leathers on. You’d be drinking away and all of a sudden the tannoy goes, ‘Last call for 750s’. ‘Oh shit, hang on a minute’… leave the pint… ‘I’ll be back in a minute’. And if you done well, back in the bar and it’s, ‘There you go, Dave, another pint for you’. And you had another two races to go. Hilarious days. I only finished last once in my career and that was when I’d been out on the piss all night.” 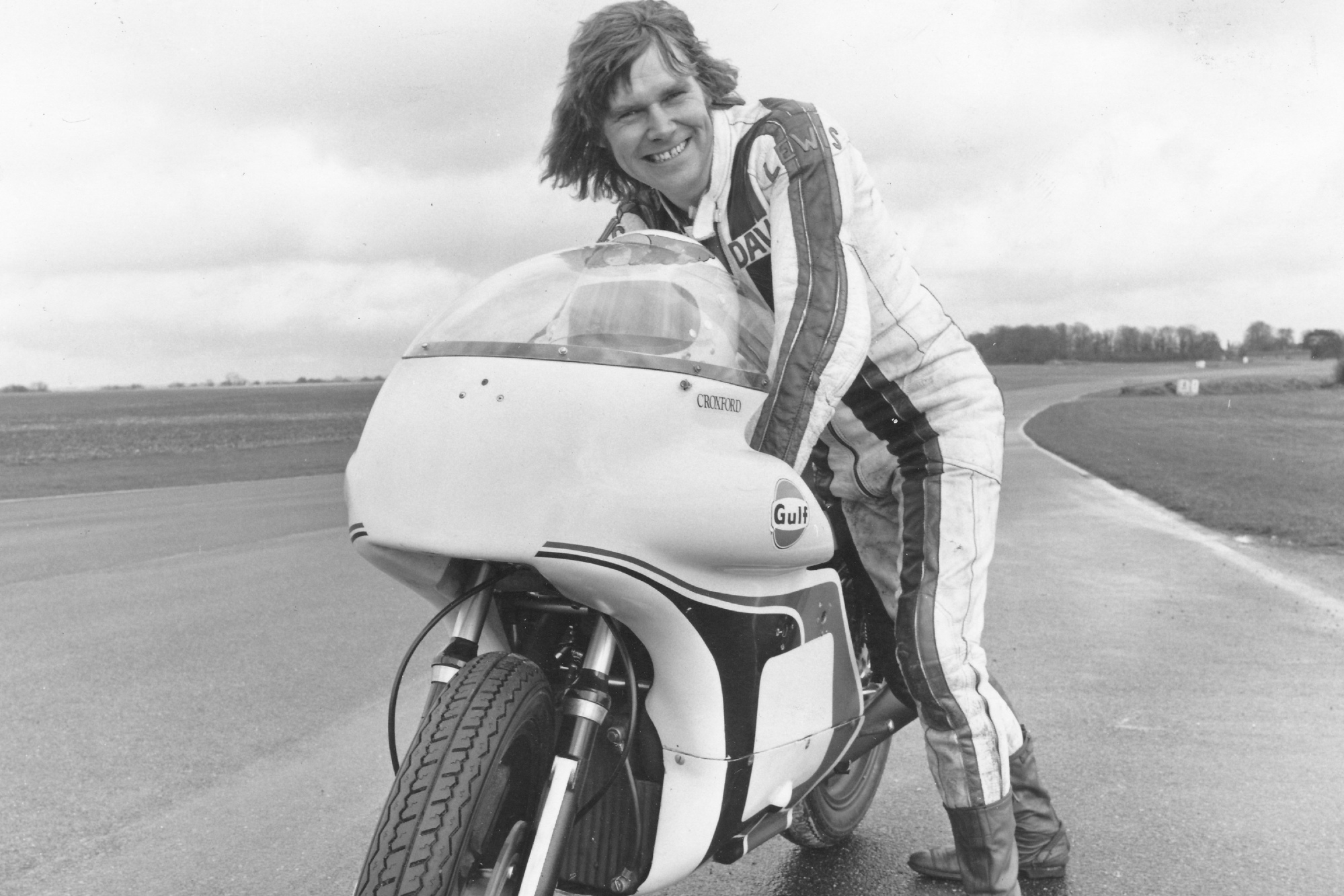 “This is a John Player posing shot at Thruxton, about 1974, because the bike’s got the space frame, not the earlier monocoque frame. John Player came in really big and they were the first ones to really do the PR bit. I used to like it all because there was always a drink involved and you got piles of cigarettes. I used to drive up to London in my Aston Martin, park outside the Connaught Rooms, do the PR, have a few beers and off I’d go. I had three Astons during that time, including a DB6 Mark 2 convertible. God, they’re like half a million now. I sold mine, didn’t I, for about two grand.

“My first contract in ’72 was about seven grand, which wasn’t too bad. In ’76 they paid me eight grand and at the end of the year they said, ‘Dave, we owe you three grand. Do you want the money or you can have your John Player Norton’. I said I’ll have the three grand and I never got it. So I could’ve had the bike, an original John Player Norton, worth about 200 grand now. Unbelievable. But life’s all ifs and  buts…” 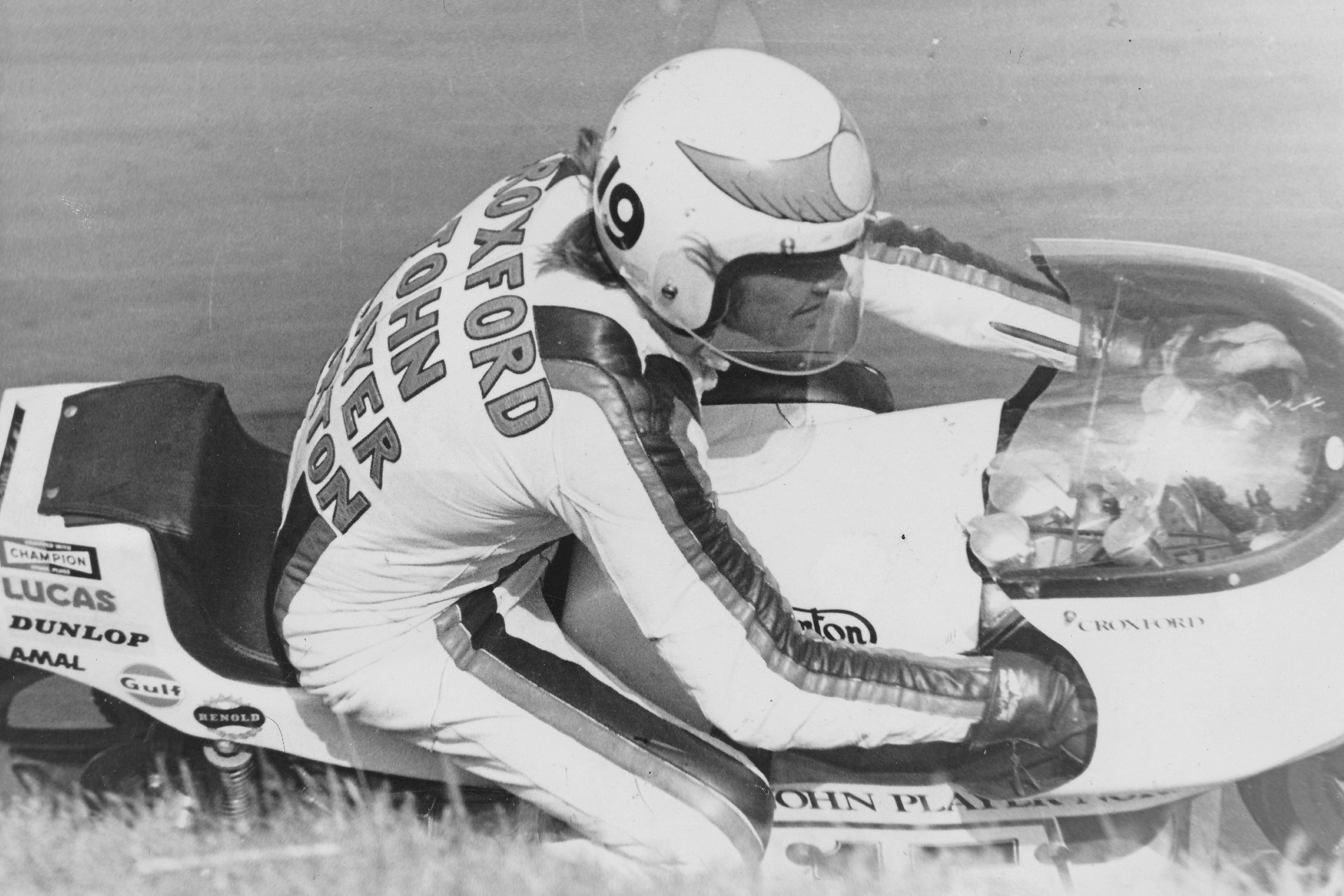 “This is the monocoque John Player Norton at the Mallory hairpin in ’73, a few weeks before I really stuffed the bike at Woodcote at Silverstone. Peter [Williams] built the monocoque and it suited his riding style. If you ever watched him race, he would get down, tuck in and that’s all you’d see of him – whoosh and he’d be gone – smooth is quick. That’s why he was so good at the Isle of Man – he’d just whistle around the corners. My style, I used to like to wrestle the bike a bit. If you were doing 120 miles an hour on the monocoque and you wanted to change line quick, you couldn’t lift it up and correct it. The bike I loved was the next one, with the tubular space frame. I loved it, I could out-ride anyone on that thing.” 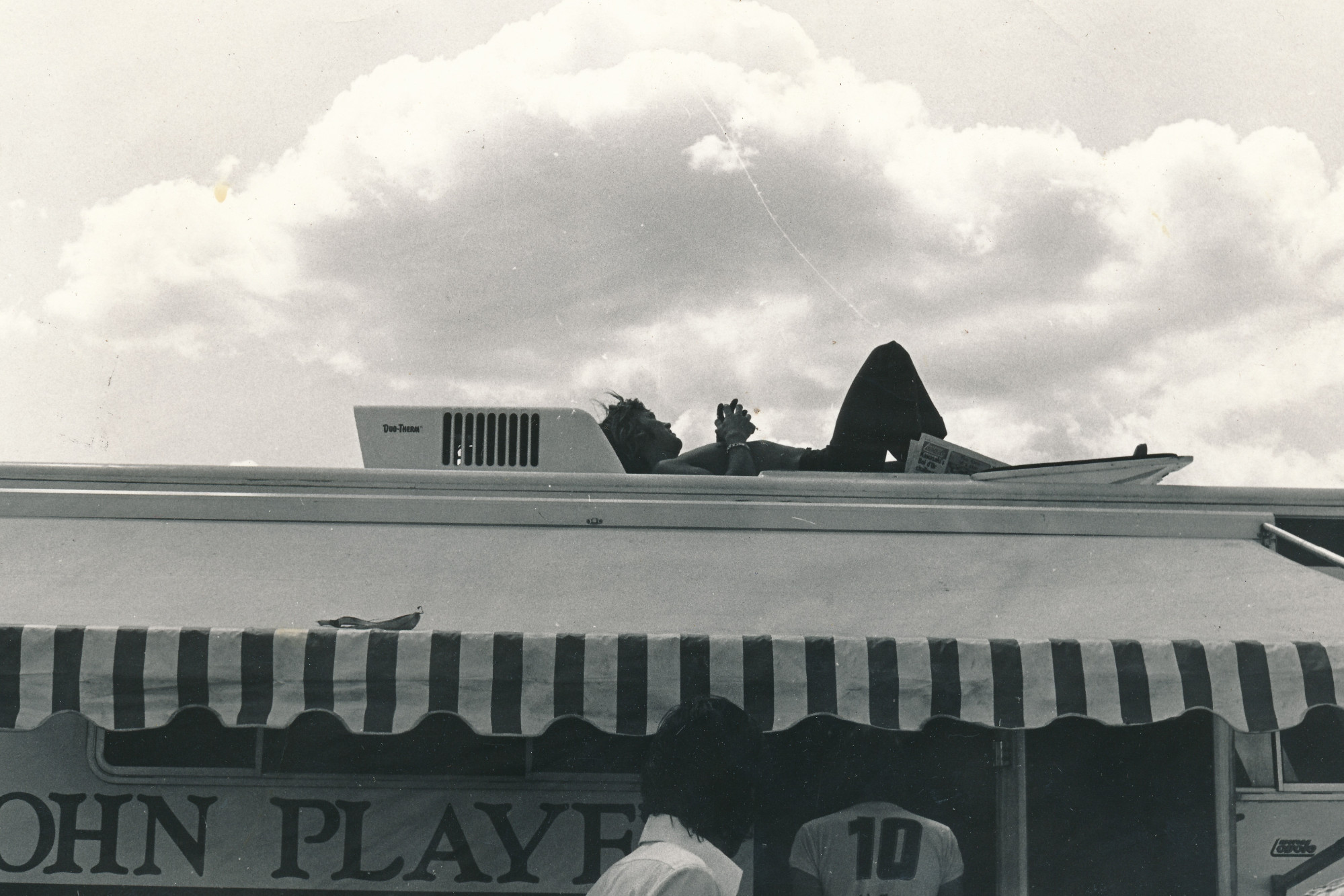 “This is the Imola F750 round in ’73. I’m on the roof of the John Player Norton motorhome, having a cigarette, probably deciding what I’m going to do on the first lap: out-brake them or whizz round them. But it never really happens like that, does it? Ah, I’ll do it next lap…

“That motorhome was way beyond what anyone else had at the time. They bought it off my local dustman because he knew how to get those things from the States. It wallowed all over the road, especially driving through the Alps on the way down to Imola. We struggled in the race. Willy [Peter Williams] did well but I finished eighth or ninth. The two-strokes were coming on strong, so we could see the writing was on the wall.” 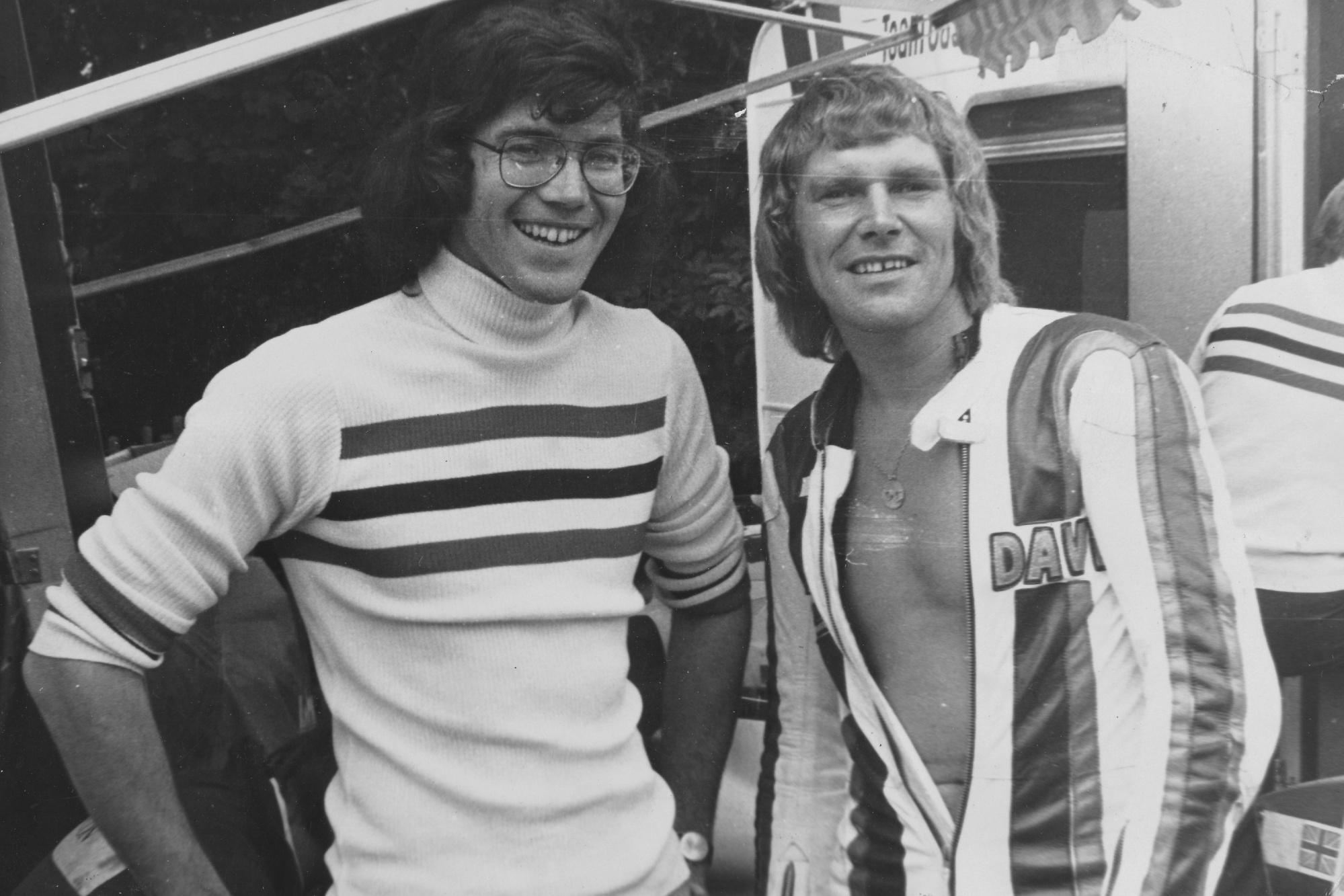 “Peter [Williams] and I got on really well at Norton. He’s very well spoken and brainy. Me? Oh, that’ll do! Peter and his mechanic Norman White would put washers in the forks. ‘What you doin’ that for Peter?’ ‘Ah, it makes the springs rebound better.’ I never bothered with all that – ‘Nah, that’ll do!’. But after Peter had his [career-ending] accident at Oulton Park in ‘74 I had four bikes, so I said I’ll try Peter’s bikes because he always did well. Bloody hell, did they handle – he really knew what he was doing. Peter knew how to twiddle. Me? We had a Girling spanner – jack up the suspension, right, that’s it for the year, let’s go racing.” 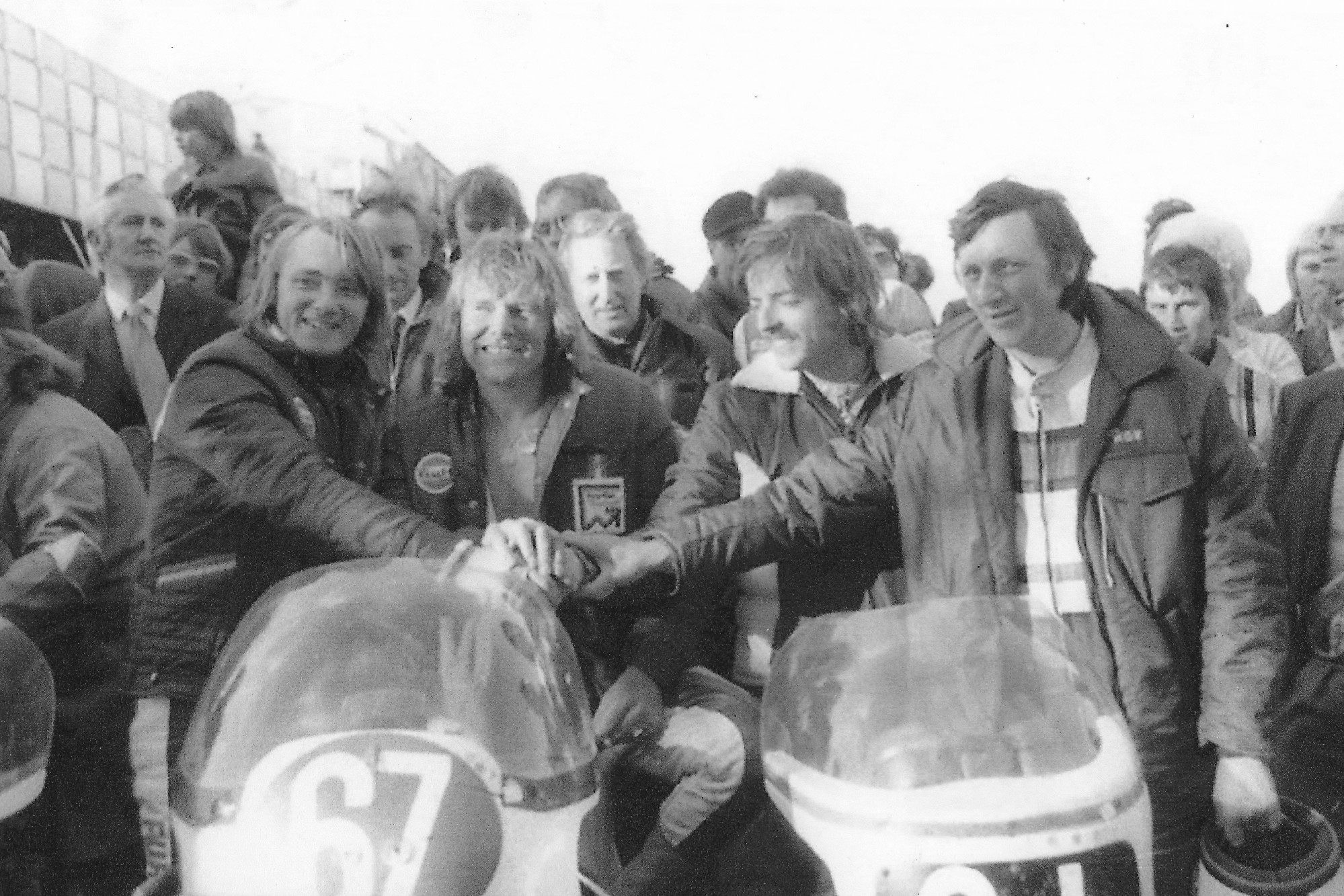 “In 1975 Alex George [on Croxford’s right] and I won the production TT on Slippery Sam [Triumph’s legendary Trident triple race bike, so called for its oil leaks]. I was a factory rider, that’s the only reason I went, while Alex just came in for the one race. I was never a fan of the TT,  it used to frighten the life out of me. I did it five times and only crashed once there, on the bloody Mountain. I took off into the air – ‘Dave this is the big one, you’re gonna die. Dave, this is it’. Then you get up and you think, nope, I’m all right, you’ve done it again. It wasn’t that fast, about 100, but it was a horrendous crash. Usually with me it was sod the TT: I’ll stay at home and clean up on the mainland while all the stars are way on the Island.” 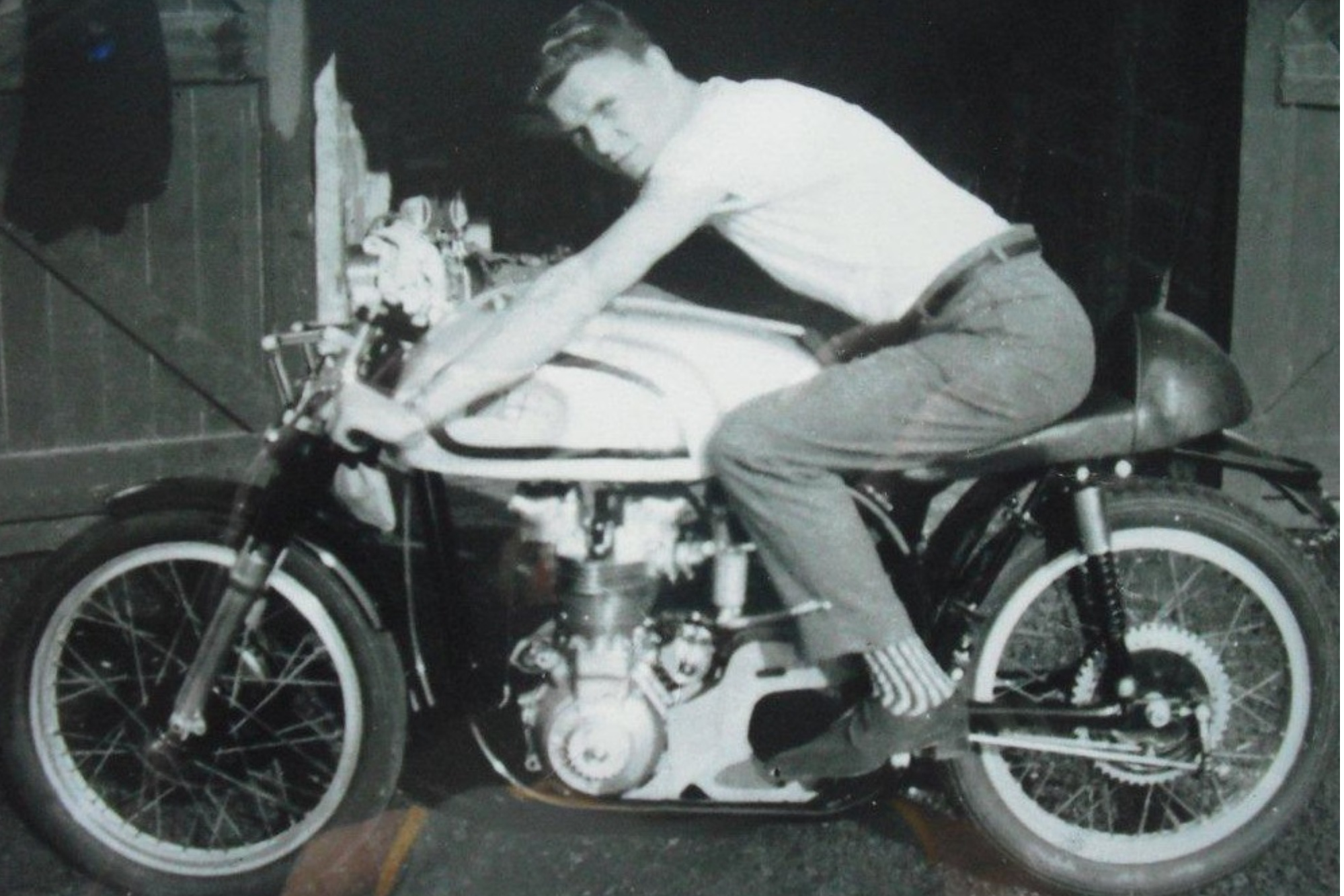 “Back in 1961 I suppose I was a bit of a ton-up boy, a cafe racer boy – Gold Stars and all that sort of thing, I used to live at the Ace [Café, the legendary biker hangout in West London]. Back in them days you’d get nicked for anything, you were always losing your licence, it was murder. In the end I decided I would build something really fast so the cops couldn’t catch me. So I bought a Manx and put a Bonneville race engine in there, with a five-speed gearbox. It used to really go.

“I’d already done a bit of sidecar passengering and I thought racing ain’t so bad, so I wanted to race the Bonnie Manx. But in them days there was no club racing; if you wanted to race you started at nationals, so getting an entry wasn’t easy.”

“I ended up having to ride the bike to bloody Charterhall [a former WW2 airfield in Scotland]. Four of my mates went in a little old Comma van with tents and stuff, and I rode the bike there. We stopped and camped on the way, it was about 500 miles. You just could not get in a race meeting down south, so I was always up that way when I started racing. For the ride up there we fitted some silencers and we had the racing megaphones in the van. On the way up I was going around roundabouts getting practice.

“Of course, we get there and I’m Jack the Lad. There’s [top Scottish riders] Alastair King and Bob McIntyre and all those guys on Manx Nortons. After practice I’m thinking I’m fast. My mates are asking me what’s my plan of action. ‘Ah, it seems straightforward,’ I said. ‘I’ll follow them and on the last corner I’ll just nip by.’ Not to be! I finished about 22nd. I got a bit of a shock. I thought, oh dear. But you struggle on and you make it…”