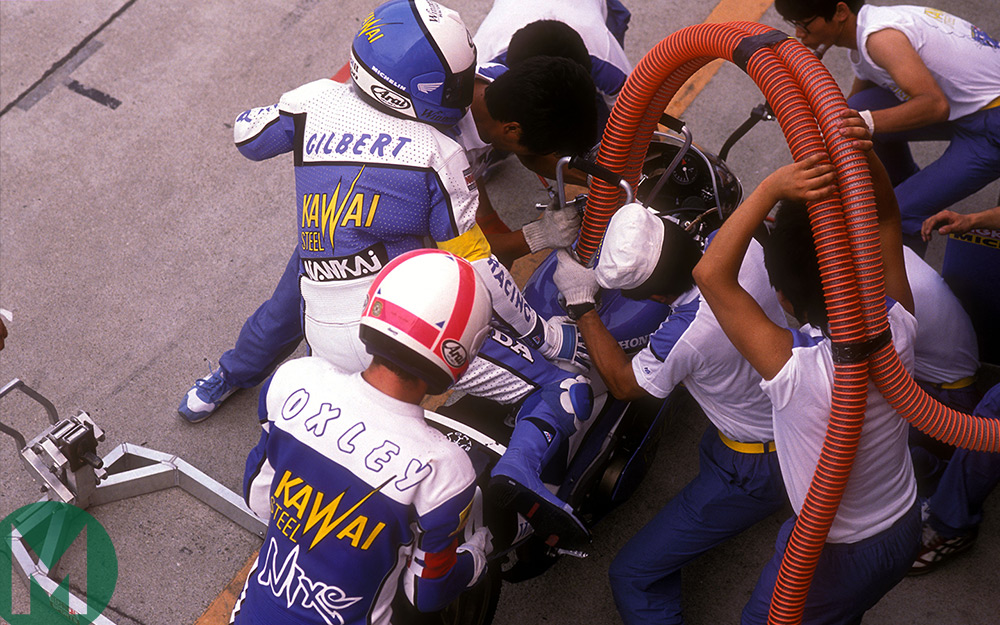 Race day dawns a little sunnier but a few clouds keep the temperature down to a ‘cool’ 30 degC. Normally Suzuka can be 35 degC with stifling humidity.

The hype fuels the tension as the 11.30am start approaches. I was slightly faster than Gilbert in practice so I’m doing the Le Mans start. And from where I stand it’s a long, long way to the front of the grid where Doohan stands on pole. After a few mouthfuls of electrolyte energy drink I line up for the sprint. My mouth is parched, my heart racing and my legs nervy like jelly as Suzuka’s electronic grandstand info board counts down to ‘GO!’.

I make a good getaway but within two seconds all hell breaks loose. Two bikes collide in the melee. I swerve wildly to avoid the exploding debris and I can’t believe it when another bike alongside me ploughs into the wreckage. The last I see of the rider he is six feet in the air hanging onto his motorcycle, upside down.

Incredibly the marshals have cleared the mess by the end of the first lap and the 8 Hours isn’t going to be stopped. The next lap brings more crashes as some riders get carried away with the occasion. I soon discover that riders who had qualified in front of me can’t keep up at that kind of pace for more than a few laps. I’m steadily making up places.

After five laps or so the heat is already getting to me. Sweat from my forehead is splashing like rain onto the inside of my visor and stinging my eyes. It’s also difficult to breathe when you’re under the bubble, because the heat is so intense that it’s like sticking your head in the oven. And the footpegs get so burning hot that I lift my boots off them on the straights.

I begin to wish I could crash and get it all over with. A few laps later the heat begins to take its toll on the tyres too. Another rash of crashes proves that some riders haven’t prepared themselves for this – it’s so hot and slippery at Suzuka that you have to slide the rear tyre to keep going at a decent pace.

My only worry is getting in the way of Doohan and the other GP stars when they lap me – and my pet nightmare is bringing down Rainey, currently locked in a duel with Eddie Lawson for the 500 world title. I can already see the headlines: ‘RAINEY BREAKS LEG AND RUINS WORLD TITLE CHANCE IN JOURNALIST SMASH’. So I take a few glances over my shoulder as the session draws on. Doohan is way ahead when he effortlessly swoops past, followed by Rainey. Kocinski comes by at the rapid turn one, puffs of smoke coming off his knee scraper as he chases the leaders.

By the end of the first hour we are up to 24th. The bike is flying, revving hungrily to 13,000rpm and handling well through Suzuka’s twists. There were no less than 28 RC30s on the 60-strong grid; that’s nearly 50 per cent of the bikes and adequate proof that the RC is as near as any normal human being can get to a factory bike.

Between sessions I am given the full treatment by the team doctor. I’ve got wrist problems so he gives me acupuncture, while I peel dead skin off the soles of my feet, burned by the footpegs. Every hour off the bike – while Gilbert is out there doing his bit – is spent on a bed getting a massage and rehydrating. There’s even a canister of oxygen on hand if I need it. And the two girl assistants who help me dress and undress give me a new pair socks for every session.

Doohan is receiving similar treatment in the next-door pit but doesn’t look as knackered as I feel – he doesn’t get new socks either. The awesome pace begins to tell at the front of the pack. Doohan and Gardner are stretching their lead but Doohan collides with a backmarker and goes to hospital with a badly mangled hand, putting fellow RVF pilots Dominique Sarron and Alex Vieira into the lead.

Despite the massage and acupuncture, I feel more drained each time I get on the bike and I can’t maintain my early pace. I’m not exactly race fit. Joker Schwantz comes past me on the back straight, wildly waving both legs at me.  In the next session he powers underneath me out of a fast left-hander, shaking his head mockingly. Earlier I had passed him pushing his Yoshimura GSX-R, when he had run out of fuel, and I begin to wish I’d slowed right down and had a good laugh at his predicament.

The Rainey and Kocinski teams go out too, so after five hours we are 16th, one place out of championship points. In the later hours of the race the temperature cools but my wrists weaken. My last two sessions are really not enjoyable at all, but we’re 12th at the flag as darkness falls. The relief of the finish is both breathtaking and frightening. The last lap is lit by a massive, booming firework display that shakes the ground and as we arrive back at the finish the track is invaded by the frenzied crowd. We get the bike back into the pits just before we’re engulfed by the seething masses who snatch whatever they can as a Suzuka souvenir. I feel they’d be quite happy to have one of my arms or legs.

The team celebrations begin with jeroboams of Moet & Chandon. We all shake hands, Mr Kawai beams, the two girl assistants burst into tears. Next morning we pick up £1000 prize money each.

My head hurts like I’ve been in a boxing match and my body aches like I’ve run several marathons, but I could get used to being a pro-racer.